From TPP to CPTPP

Q1: What is CPTPP, and how is it different from TPP?

A1: Despite the withdrawal of the world’s largest economy from the agreement, CPTPP is one of the largest free trade agreements in the world, representing nearly 13.5 percent of global gross domestic product (GDP). The agreement links 11 Asia-Pacific economies—Australia, Brunei, Canada, Chile, Japan, Malaysia, Mexico, New Zealand, Peru, Singapore, and Vietnam—providing freer trade and investment access among its members. Most of the original TPP text remains intact, and two-thirds of the CPTPP’s 30 chapters are identical to TPP.

At the same time, a total of 22 provisions from the original agreement were suspended or otherwise changed, setting aside issues that were priorities for the United States in the original negotiations but did not enjoy similar support among the other TPP countries. The most significant revisions were in the investment and intellectual property (IP) chapters. For example, in the CPTPP investment chapter, investors’ ability to litigate disputes under investment agreements and investment authorizations—which are used mostly for mining and oil investments—will be more limited relative to TPP. Similarly, under the revised IP chapter, the length of patent protection for innovative medicines has been shortened, and technology and information protections have been narrowed. Copyright periods for written materials have also been shortened. 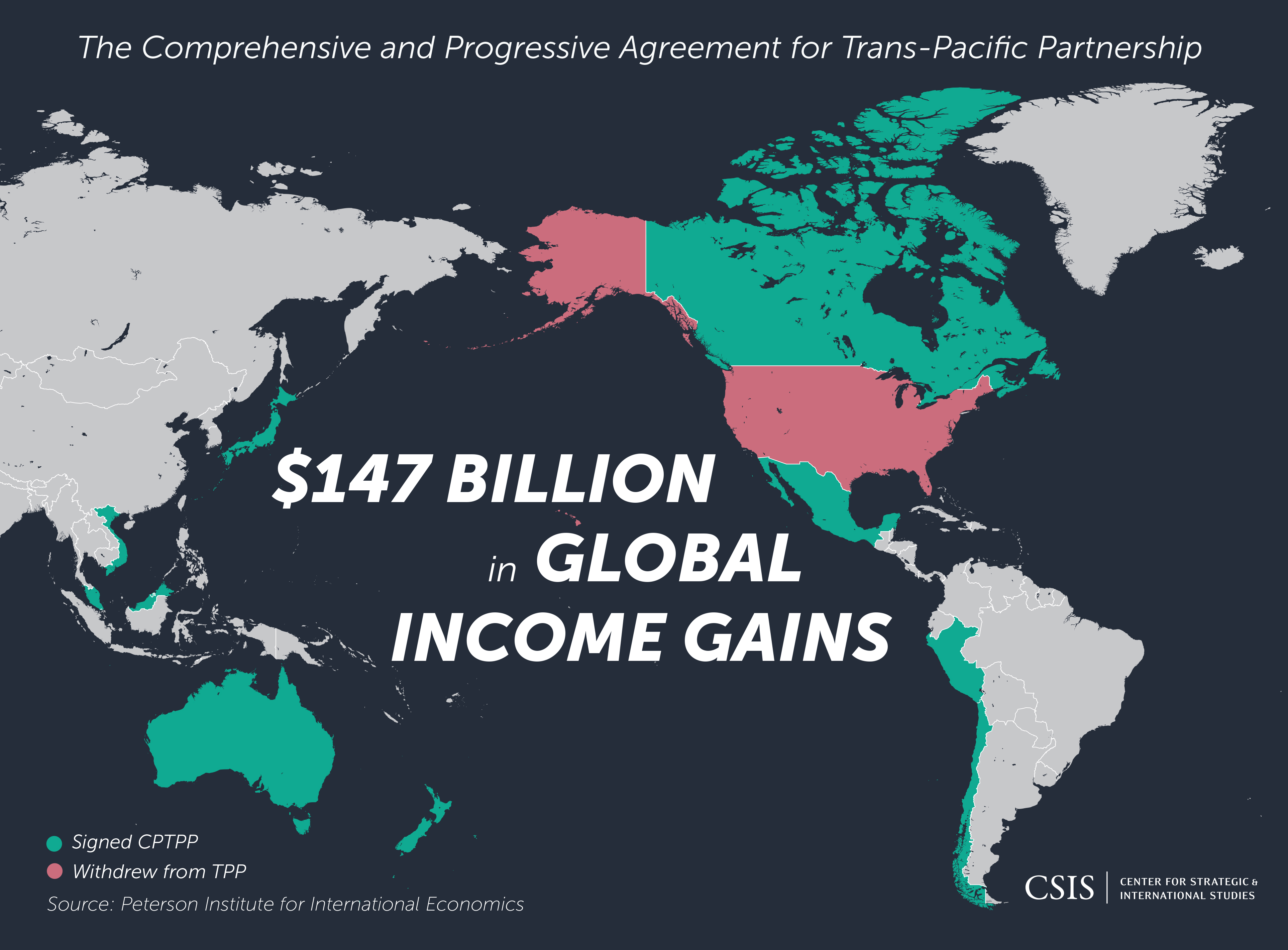 Q2: Why are these changes important?

A2: The suspended provisions lessen slightly the scope and reach of CPTPP as compared to TPP. In the IP chapter particularly, the stringent requirements that the United States pursued in technological protection measures (TPMs), rights management information, encrypted satellite and cable signals, and safe harbors for internet service providers (ISPs) have all been removed. The suspension of longer patent periods for innovative medicines is a blow to U.S. pharmaceutical companies, and shorter periods for copyright protection now deviate from the American standard. In the investment chapter, the decision to suspend provisions related to investment agreements and investment authorizations means such investments will not necessarily be covered under investor-state dispute settlement and are therefore marginally riskier for foreign investors.

Even with these provisions suspended, however, the IP chapter offers the most advanced and detailed standards on intellectual property in a trade agreement to date. It gives substantial protections to companies operating abroad from having their innovations stolen.

Arguably more notable, however, is what was not changed between TPP and CPTPP. The chapter on state-owned enterprises (SOEs) was not altered; that chapter addresses subsidization of state enterprises and requires countries to share information about their enterprises with one another, a big step forward in addressing the difficult issue of state intervention in markets. Chapters on e-commerce and government procurement were similarly unchanged from the original TPP agreement. The e-commerce chapter has broad protections for data created through digital trade and protects the free flow of information across borders, while the government procurement chapter opens government contracts to foreign bidders. These disciplines are positive not only for the CPTPP signatories, but also for the global trading system and are largely consistent with U.S. interests.

Q3: Where does the agreement go from here?

A3: CPTPP still must be ratified by member countries in order to go into effect, and obstacles to ratification remain. Japan’s opposition parties were against the original TPP and will likely have the same concerns with CPTPP, though Prime Minister Shinzo Abe’s Liberal Democratic Party (LDP) has firm control of both houses of the Diet and will likely push the new agreement through. Mexico’s presidential campaign and elections in July may impact its schedule for ratification. Also, during the negotiation of CPTPP, four issues were marked to be discussed further, including Malaysia’s reservation list for SOEs, a minor adjustment to Brunei’s schedule for coal, Vietnam’s concern about trade sanctions based on labor laws, and Canada’s protection of its communications industry for cultural reasons. While these issues were addressed in negotiations, their last-minute nature suggests that domestic political concerns for the signatories could delay ratification.

Q4: What does this mean for the United States going forward?

A4: The trade and investment rules in areas such as e-commerce and SOEs established in the CPTPP help advance U.S. objectives even without our participation. At the same time, U.S. absence from the new deal puts it at a competitive disadvantage in trading with CPTPP countries, particularly in contested sectors such as agriculture. For example, under CPTPP, Australian beef exporters will now pay only a 9 percent tariff on their sales in Japan, while their U.S. competitors will continue to face a basic tariff rate of 38 percent. A study by the Peterson Institute estimates the United States moves from a $131 billion gain under TPP to a $2 billion loss under CPTPP. Meanwhile, a study by the government of Canada’s chief economist estimates that Canada will benefit considerably more from CPTPP relative to TPP, in part due to the absence of U.S. competition. It’s also worth noting that the EU-Japan free trade agreement also threatens to displace U.S. market access in favor of the European Union absent U.S. participation in TPP.

Though there is a significant economic and even stronger strategic case for the United States to come back to TPP, the challenges are considerable. President Trump has started to act on his longstanding skepticism about trade in recent weeks; it is hard to imagine his administration would come back to TPP without significant improvements to the original agreement. At the same time, CPTPP countries are unlikely to be in a negotiating mood and, if anything, may insist that if the United States wants to return, it will have to accept an agreement that is weaker in key areas of U.S. interest. Progress toward U.S. entry into TPP is unlikely in the near term; in the meantime, other Asia-Pacific economies will move ahead with deepening trade and investment integration without us.

How Indo-Pacific agreement stands to lose due to Biden’s approach, US’ mindset
The Print | Matthew Goodman
June 21, 2022
View all content by this expert