On Sunday, July 11, Cubans took to the streets calling for the resignation of President Miguel Díaz-Canel and denouncing the regime’s anti-democratic governance. Recent crackdowns on political freedoms and individual liberties, rising poverty levels, and government economic mismanagement have fueled the largest protests that the island has seen in over two decades. Complicating matters, Cuba recently reached a new record-high Covid-19 caseload.

Q1: What is happening in Cuba and what are the main causes of the protests?

A1: Cuba recently witnessed the largest anti-government demonstrations since the 1994 Maleconazo uprising, which sought to highlight an economic crisis and widespread hunger brought about by the fall of Cuba’s largest benefactor, the Soviet Union, during what is known in Cuba as the “special period.” Protests arose spontaneously in over 40 towns and cities across the country.

Current demonstrations should be seen as another important moment in a historic cycle of demonstrations. The demonstrations began on Sunday, July 11, and quickly spread across the country, fueled by widespread discontent with more than 70 years of oppressive government and the lack of progress for the average Cuban. A recent increase in electricity blackouts and lack of access to food, medicine, and vaccines during the pandemic have exacerbated the pent-up frustration.

The current protests call for the overthrow of the dictatorship and have directly expressed opposition to the regime’s repressive methods and the country’s anti-democratic political system. At the end of 2020, the San Isidro Movement led by artists and activists protested the repressive measures and economic privation. Yet, the current demonstrations have stood out for being broadcast on Facebook and comprising a wider swath of society—not only activists and cultural leaders, but also ordinary citizens and rural peasants.

Cuba’s government says its economy shrank by 11 percent in 2020, the worst economic decline since the collapse of the Soviet Union. Even before the pandemic, Venezuela’s implosion and the concomitant fall in its oil production, along with Trump-era sanctions and restrictions on remittances to Cuba, had pushed the island’s economy to the precipice of collapse.

Despite ongoing local vaccine research, a lack of access to effective vaccines has contributed to soaring Covid-19 caseloads, which are likely higher than reported as the regime underreports Covid-19 cases. Additionally, the Díaz-Canel administration’s failure to deliver on economic reforms to permit the establishment of small businesses and eliminate the prohibition on some forms of economic activity has increased discontent with the regime during the pandemic.

Q2: What are the prospects for change in Cuba?

A2: Cuba’s tightly controlled state security apparatus is likely to keep the Communist Party in power for the foreseeable future. Its model of social control, the number of informants, and the ratio of secret police to the population—estimated to be higher than that of the Stasi in East Germany—is likely to insulate the regime from any sort of imminent collapse. Beyond regime security, however, the Cuban government may engage in some short-term loosening of economic restrictions. U.S. sanctions are exerting pressure on the island’s economy, and along with  projections of skyrocketing inflation following the monetary reform program that devalued the peso in January 2021, the state may be forced to loosen its grip on the island’s economy—at least temporarily.

The Díaz-Canel administration has already announced several reforms based on the protesters’ demands, including programs to foster the opening of small and medium-sized enterprises. While the Biden administration has refused to consider lifting the embargo and has so far resisted reversing Trump-era sanctions and travel restrictions, pressure from the international community could be building to reverse course. Congressional bipartisan opposition exists to lifting the embargo on the basis that opening would not generate significant change, further complicating the Biden team’s strategy.

So far, there have been several notable resignations of Cuban government officials, but none signal sufficient discontent with the government to threaten state security. In response to the regime’s violent treatment of protesters, the vice minister of the interior, Jesús Manuel Burón Tabit, resigned on July 14 citing excessive use of force. Purportedly, internal dissent has emerged between young and older generations in the military, but any fissures that emerge are not likely to be serious enough to threaten regime security. Despite failing to mortally wound the Cuban regime, the most significant outcome of these protests may be the visceral demonstration of the organizing power of the internet, which the Cuban government opened for citizens only several years ago.

Q3: What is the regime’s response to the demonstrations?

A3: Since the start of the Covid-19 pandemic, the Cuban government has grown increasingly intolerant of any criticism of its pandemic management. Unlike Fidel Castro, who benefited from higher approval ratings, a more effective propaganda machine, and greater charisma, Díaz-Canel lacks the gravitas. The Cuban president has spoken on radio and television, accusing protesters of being “criminals,” and blaming the United States for fomenting the protests. He also called on a rapid reaction force of government supporters to take to the streets, confront protesters, and “defend the revolution.”

The internet, a focal point of opposition organizing efforts, was cut during the Sunday protests. After it was restored, access to social media networks was blocked, including WhatsApp, Facebook, Instagram, and Telegram. In the aftermath of protests, the streets have been patrolled assiduously by the police, and more than 100 people were arrested on July 11—though the true number could well be much higher. Security forces fired tear gas at the protestors, assaulted a foreign photojournalist, and killed one person in a confrontation with police forces involving live ammunition.

The Díaz-Canel administration recently announced that it would relax restrictions and lift duties on hygiene products, food, and medicines brought into Cuba. The government also claims to be working on stabilizing the national electricity system and the regularization of medicine supplies. The concessions also include programs to begin the opening of small and medium-sized enterprises and provide exemptions for state companies to raise wages above federal regulations. With the streets back under greater regime control, the Cuban government now denies the existence of protests, rejecting cover of the unrest as a “false narrative” and “false images” perpetrated by enemies of the regime—a canard echoed by Maduro regime officials in Venezuela as well.

Q4: What is the Biden team’s response?

A4: The Biden administration has been critical of Cuba’s government, its repression, and the mismanagement of its economy. It recently released a statement expressing its support for the demonstrations, declaring it “stand[s] with the Cuban people.” The Biden team presides over a slow-moving review of U.S.-Cuba policy, in which it must also consider the impact on domestic politics, given the role that Latino voters in Florida, and the Cuban diaspora specifically, have played in recent electoral politics.

The Biden administration has refused to lift the U.S. trade embargo. On June 23, 2021, the United States was one of only two countries that voted against ending the U.S. economic embargo on Cuba at the UN General Assembly. In a similar fashion, in May 2021, Biden renewed a Trump-era decision classifying Cuba as a country that is failing to cooperate with U.S. anti-terrorism efforts, declaring it a state sponsor of terrorism.

Before the protests, the Biden administration had signaled that it would consider reversing Trump-era policies that restricted sending remittances to Cuba. However, Biden has recently announced that he will not reverse restrictions on remittances—at least as long as there is evidence that the regime would confiscate some of those remittances. Instead, the administration announced the formation of a “working group on remittances,” studying how the practice could be permitted while ensuring that the regime in Havana cannot touch the money (presumably through the use of web-based payment applications). The Biden administration is also considering an increase in personnel at the U.S. Embassy in Havana (likely more human rights officers to document abuses and speak to dissidents) and a strategy for ensuring greater internet accessibility in Cuba.

While the Biden administration seemed content to leave Cuba on the back burner and delay the promised thaw in relations, the protests will force the administration to contend with Cuba policy more directly. Mishandling the situation in this region, where migration has been on the rise, could lead to a migration crisis exacerbated not only by recent events in Cuba but also the ongoing political crisis currently roiling Haiti.

Ryan C. Berg is senior fellow in the Americas Program at the Center for Strategic and International Studies (CSIS) in Washington, D.C. Rodrigo Castillo Perez is an intern with the CSIS Americas Program. 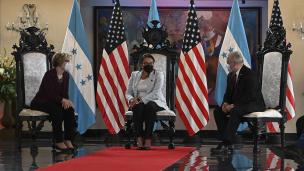 US, Mexico to Hash Out Issues at White House
Voice of America | Jorge Agobian and Anita Powell
July 12, 2022
Commentary 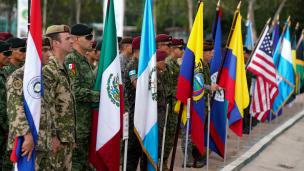 Challenges and Opportunities for the Inter-American Defense Board
By Ryan C. Berg
July 6, 2022
In the News