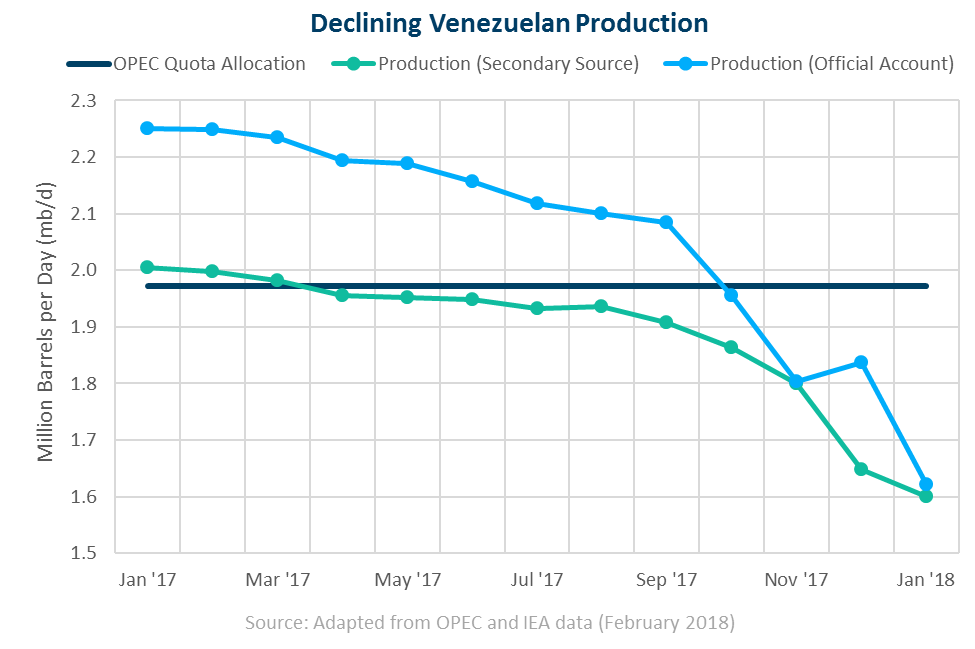 Venezuela’s loss of production volumes in 2017 was the largest global unplanned fall in output last year, a trend that looks set to intensify in the coming year. Chronic mismanagement and underinvestment, have left shortages in basic equipment and supplies across Venezuelan’s vast oil fields, causing a significant drop off in operations. As a result, Venezuela’s annual rate of production in 2017 fell by 270 thousand barrels per day (kb/d) on 2016 levels, with the rate of losses significantly picking up in the last quarter of the year. Venezuela is now unintendedly the second-largest contributor to the OPEC/non-OPEC production cuts after Saudi Arabia, providing a 360 kb/d reduction in its output beyond its agreed target resulting in a 481 percent rate of compliance in December. Even the oil Venezuela is shipping out of the country is reportedly being returned due to poor quality. It is very difficult to imagine that Petróleos de Venezuela, S.A. (PDVSA) will be able to arrest the rate of production decline even with assistance from Russian and Chinese companies, the only two countries still actively doing business in Venezuela. The evidence at the moment suggests that declines are likely to intensify, especially if the United States implements oil sanctions. Such an outcome could be one of the most significant material impacts on the global oil market in 2018.

Given Secretary Tillerson’s comments, and in light of the Maduro government’s increasingly authoritarian rule, human-rights violations, and electoral abuses, oil sanctions look like an increasingly probable option. However, it is not yet a foregone conclusion given other sanction measures that the administration could take (additional financial sanctions for example). Although the decision to impose oil-related sanctions is complicated by several factors, there are multiple ways in which U.S. oil sanctions could be levied against Venezuela. In order of increasing severity, these options include restricting U.S. light oil and gasoline exports, banning the sale of certain oil-related equipment to Venezuela, preventing the importation of Venezuelan crudes (from which the Caracas government still derives a significant portion of its operating revenues), and prohibiting the use of U.S. dollars to pay for oil transactions. Although the operational specifics of each of these options remain unclear, such actions would have an adverse impact on Venezuela, U.S. Gulf Coast refiners, the Venezuelan people, and other regional importers of Venezuelan crude (mainly countries in the Caribbean). 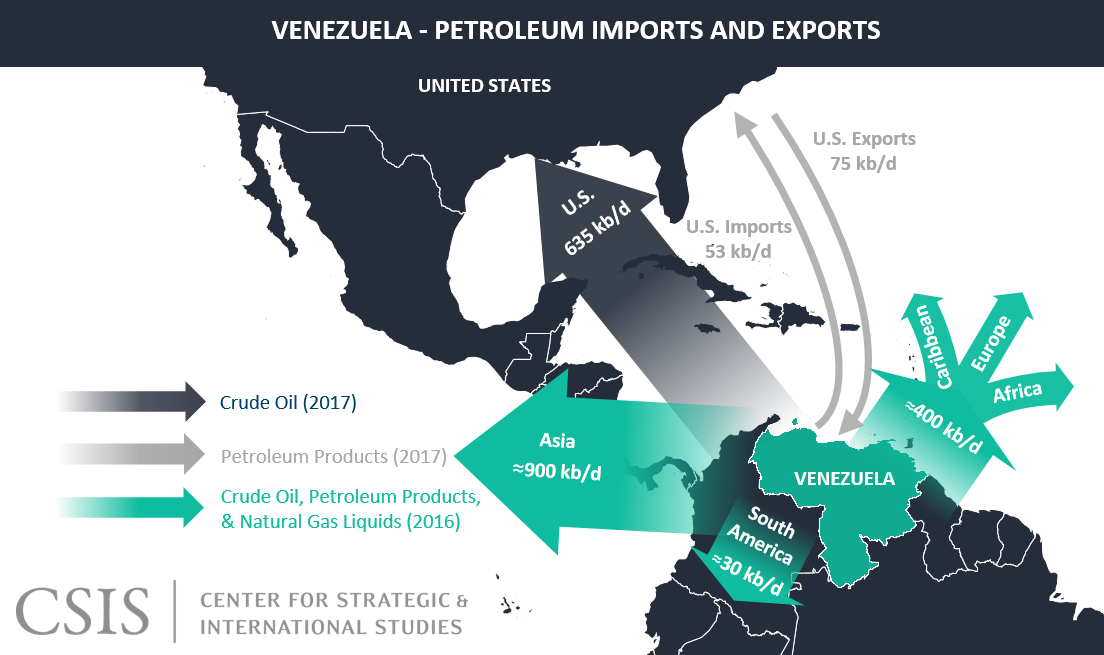 On one hand, the United States is arguably in a better position to withstand the impact of oil-related sanctions on Venezuela today than it has been for much of the history of U.S./Venezuela oil trade, but steps to remove the totality of Venezuelan crude from the market would still have a generalized price impact that could be felt by U.S. consumers. The most acute impact would be on Gulf Coast refiners. The latest available data from the U.S. Energy Information Administration (EIA) indicates that the United States imported a total of 505 kb/d of Venezuelan crude oil in November. This rate has further declined in February as Venezuela’s production continues to fall and as U.S. refiners have made proactive efforts to wean themselves from these imports in light of possible oil sanctions. However, finding sustained alternatives to Venezuelan heavy crude may prove problematic. Mexican heavy crude oil production has also recently been in decline, while Canada has faced pipeline capacity constraints in moving more volumes to the United States. So, for the moment UK heavy crude is helping to make up some of the losses, but as seasonal refinery turnarounds in Europe approach an end, finding alternatives may prove costlier. Ultimately, a crude embargo would hurt U.S. Gulf Coast refinery margins and would likely see Venezuelan crude sold into other markets at a discount thus impacting U.S. refineries’ competitiveness in the global market. 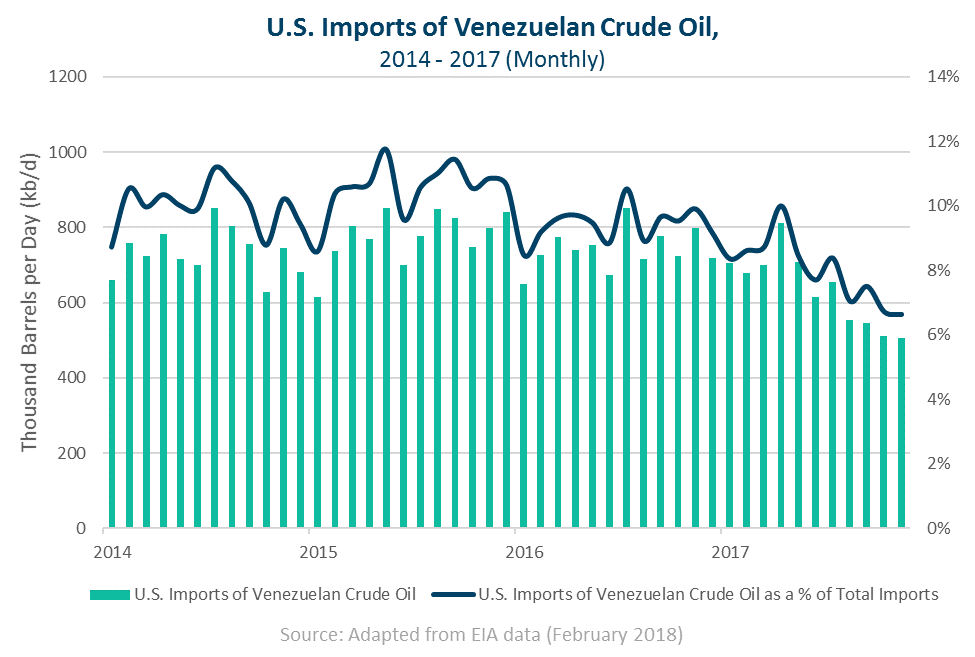 Another point to consider is whether the administration can convince other Organization for Economic Cooperation and Development (OECD) countries to partake in oil-related sanctions or would such actions ultimately have to come unilaterally. Finding support from U.S. allies in imposing oil sanctions will not only increase their effectiveness, but may also help avoid a situation where an entrenched government in Caracas can singularly lay blame to an external enemy (the United States) for the economic devastation that is likely to continue to befall the Venezuelan people. While Secretary Tillerson has made efforts on his recent tour of Latin America to drum up support, Mexico has already come out in opposition, stating that such sanctions will have negative impacts on the people of Venezuela and other Caribbean nations. Indeed, many of Venezuela’s Caribbean neighbors remain reliant on Venezuelan petroleum exports and so would be harmed by higher prices resulting from an embargo. There is also a concern that oil-related sanctions could bring further suffering to the Venezuelan population without improving or changing the conduct of the Maduro administration. Given these considerations, it could be difficult to garner support from U.S. allies to take such actions, especially among European countries with whom the administration is already engaged with regard to the Iranian Joint Comprehensive Plan of Action (JCPOA). Moreover, the effectiveness of oil-related sanctions could be threatened by Russia and China, who most likely would not choose to comply. If the administration is to move forward with oil sanctions, finding a coalition of support would likely be a prudent step to increase their effectiveness in this scenario and so as to not undermine Western alignment on the use of sanctions and further weaken the utility of sanctions as a policy tool in the long run.

The bigger question remains whether the United States and its allies are prepared not only to intervene in the humanitarian disaster that is well underway in Venezuela and spilling over into neighboring Colombia but to do the heavy-lifting required to put Venezuela on a more sustainable pathway if the opportunity arises.