Huawei’s “Safe City” products have fueled concerns that China is “exporting authoritarianism.” Among the “solutions” Huawei sells globally under this label are facial and license-plate recognition, social media monitoring, and other surveillance capabilities. To better understand these developments, the CSIS Reconnecting Asia Project examined open-sources and identified 73 “Safe City” agreements for surveillance products or services across 52 countries.

Huawei’s growing foothold in these markets could pay big commercial and strategic dividends in the future. By 2050, nearly 70 percent of people in the world will live in urban areas, according to the United Nations, and 90 percent of global population growth is expected in Asia and Africa. After adopting Huawei’s equipment, countries may be “locked-in” by high replacement costs. As these economies grow, Huawei is poised to capture market share, spread its standards, and gain access to foreign data to improve its technology.

The benefits of Huawei’s “Safe City” solutions are difficult to verify and appear grossly exaggerated in some cases. For example, a Huawei presentation claims that an unnamed city (“XX Safe City”) experienced a 15 percent reduction in violent crime; a 45 percent increase in the case clearance rate; a reduction in emergency response time from 10 minutes to 4.5 minutes; and most incredibly, an increase in “citizen satisfaction” from 60.2 percent to 98.3 percent.

Of course, the claims above cannot be verified. All statistics are reported for an unspecified location and time period and no specific data or sources are provided for the numbers. Huawei has a history of making similar claims in its promotional materials, which boast dramatic improvements in emergency response times, crime rates, and case-solving rates.

In other cases, Huawei’s claims are at odds with publicly available information. In Kenya, for example, Huawei claims that the crime rate in the regions covered by its “Safe City” systems declined by 46 percent in 2015 compared to the previous year. However, Kenya’s National Police Service reports a smaller decrease in crime rates in 2015 in Nairobi and a slight increase in Mombasa, the two cities where “Safe City” equipment was installed in 2014. According to the same report, Nairobi also saw an increase in reported crimes in 2017 to higher than pre-installation levels.

GETTING SMARTER: LOCAL CONTEXT IS KEY


The CSIS Reconnecting Asia Project will be digging into these questions in the coming months as part of its coverage of China’s “Digital Silk Road.” 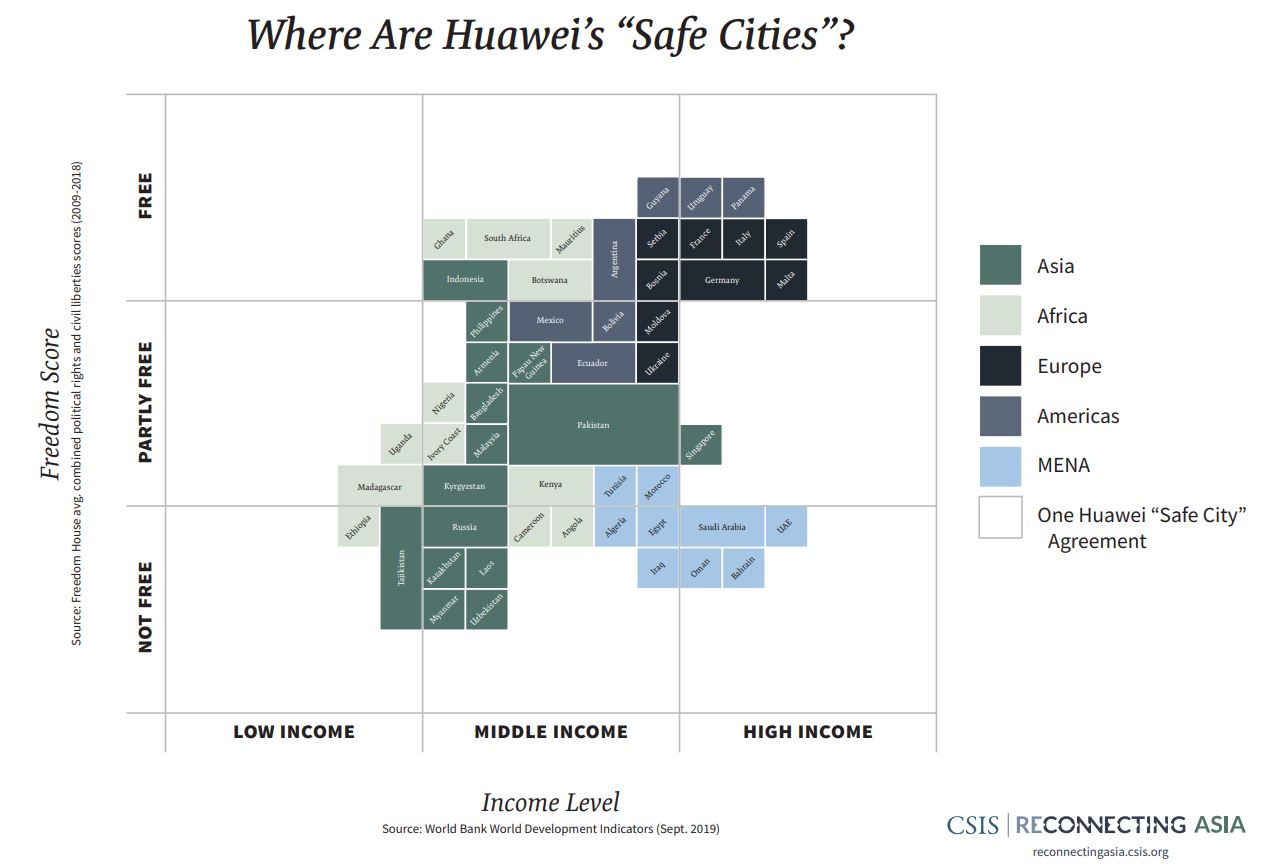 In this analysis, “Safe City” agreements include MOUs, contracts, and other types of collaboration that explicitly refer to the development of a “Safe City” by Huawei or another participant or that include one or more of the products or services aimed at public safety or security listed in Huawei’s descriptions of its “Safe City” solutions, such as: command centers, CCTV cameras, intelligent video
surveillance, facial and license plate recognition technology, crowd monitoring, situational awareness detection, noise monitoring or detection, abandoned object detection, and social media monitoring.

Agreements can occur at the national or local level or between Huawei and a private company. Depending on the scope, a single agreement may cover an entire country, multiple cities, a single city, one or more neighborhoods within a city, or one or more private commercial developments.

The analysis does not include Huawei smart city solutions targeted at issues such as public Wi-Fi, traffic congestion, energy consumption, e-government services, education, research collaboration, or other non-security related activities unless they appear in combination with one or more of the activities listed above.