Examining Extremism: The Base

Across the United States and in parts of Canada, flyers with the words “Save your race, join The Base” began to appear in major cities and college campuses during summer 2019. The message serves as propaganda for The Base, a violent, right-wing extremist group that promotes a race war and the eventual creation of a white ethnostate. This analysis provides a general overview of the group’s history, ideology, organizational structure, and targets and tactics. It concludes with an assessment of The Base’s potential to pose a serious threat if it evolves into a major brand for radical white nationalists to consolidate and carry out violence in the United States.

Rinaldo Nazzaro founded The Base in July 2018 to serve as a network of radical white nationalists that could prepare for a coming race war meant to overthrow the government and reshape society. In December 2018, Nazzaro bought 30 acres of land in Ferry County, Washington, for members of this network to practice guerilla warfare tactics and to establish a whites-only ethnostate. That same year, he moved to Saint Petersburg, Russia, and gained Russian citizenship, allowing him to evade U.S. law enforcement while growing The Base’s influence.

Nazzaro—an Italian American New Jersey native—used the aliases “Norman Spear” and “Roman Wolf” to recruit members on forums such as Twitter, Gab, YouTube, and BitChute. By July 2019, The Base gained a following of about 50 members, including one undercover Federal Bureau of Investigation (FBI) agent. The CSIS Transnational Threats Project has tracked the activities of The Base in the United States and compiled a timeline of incidents and arrests as of June 2021. 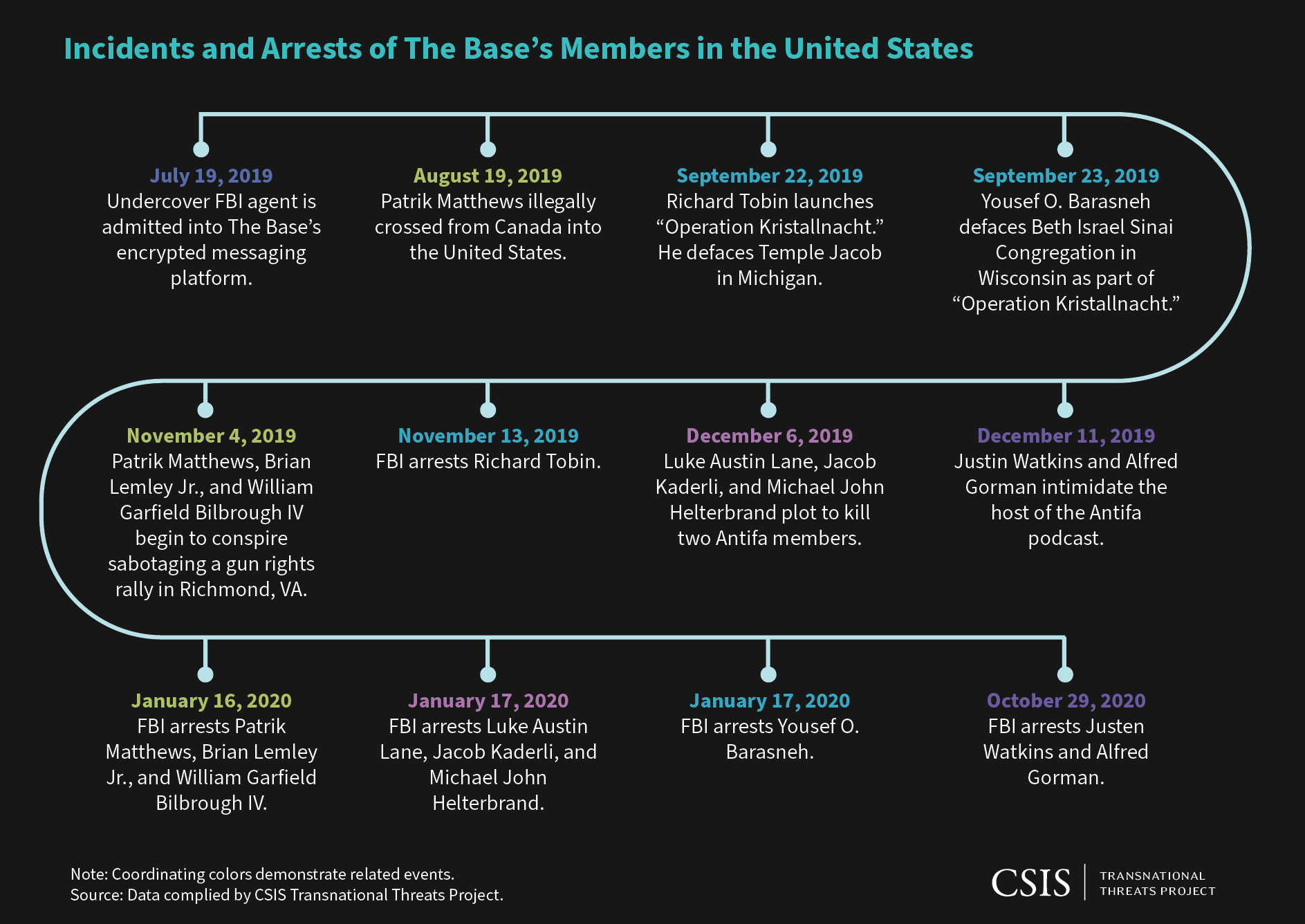 In January 2020, following three major FBI arrests of Base members and an investigative journalism piece that revealed Nazzaro’s identity, Nazzaro went underground. The Base, however, remained active on the encrypted app Telegram, and Justen Watkins proclaimed himself the new leader of The Base until he was arrested in October 2020. The following month, Nazzaro reappeared on a Russian state-owned television interview, in which he reaffirmed his base of operations in Russia but denied ever working for any of the Russian government’s security agencies.

As of May 2021, The Base remains operational and is actively recruiting members from 26 different states as well as 8 countries, including Canada, the United Kingdom, Australia, Sweden, and the Netherlands. The radical beliefs promoted by The Base have transcended the borders of the United States and spread to white nationalists globally.

The Base’s philosophy takes inspiration most notably from the German Nazi Party. The group believes itself to be the Nazi Party’s successor and aims to “finish what [Hitler] started . . . [and] carry the torch.” The Base’s logo, which incorporates three white Eihwaz runes against a black background, is also a nod to the Nazi Party. Furthermore, the organization subscribes to anti-Semitic conspiracy theories, including that Western society is secretly under the influence of Jewish leaders or a Zionist-occupied government (ZOG).

Many of the current beliefs espoused by The Base draw upon the works of former white supremacist groups. The Base is heavily influenced by James Mason’s Siege, a collection of texts from the 1980s that call for triggering a race war to protect white people. Nazzaro was specifically inspired by the Northwest Front’s Harold Covington and the Aryan Nations’ Richard Butler, who both advocated for the creation of a white ethnostate in the Pacific Northwest.

Members of The Base subscribe to a radical belief system that is intentionally marketed to attract the most extreme, fringe adherents of national socialism and fascism. At its core, The Base believes the white race is on the verge of extinction and threatened by immigration, declining birthrates, and interracial relationships. The Base believes the solution is to establish a white ethnostate in North America, but this can only be achieved after the collapse of present-day society. A key component of the group’s ideology and strategy is accelerationism, which promotes waging guerilla warfare against the U.S. government and instigating a race war to induce anarchy.

Although Nazzaro serves as the face of the group, The Base is organized around the model of “leaderless resistance,” which was inspired by Klu Klux Klan (KKK) member and U.S. white nationalist Louis Beam. Instead of giving commands through a hierarchical system, The Base advocates forming two- to three-person cells, called a “Trouble Trio,” to commit acts of violence and train together independently.

Prospective members are first interviewed and vetted based on their military experience, science and engineering training, background, race, and gender. Once accepted, they are granted access to a forum (such as, in the past, Wire and Riot) that contains an online library detailing how to carry out lone-wolf terrorist attacks, build guns, mine data, conduct interrogations and counter-surveillance, make bombs and chemical weapons, and wage guerilla warfare.

Members are also placed into geographic cells to train together at “hate camps,” where they practice a range of activities from guerilla warfare tactics to unorthodox team-building activities. For example, on October 31, 2019, William Bilbrough IV and two other Base members led a hate camp that included Satanic rituals in which they sacrificed a stolen ram, drank its blood, and consumed the hallucinogenic drug LSD.

The Base also shares members with other white supremacist groups, including the Proud Boys, Fascist Forge, the Patriot Front, the Nationalist Social Club 131 (NSC-131), the Atomwaffen Division, the Green Brigade, and the Australian-based Society of West Australian Nationalists (SWAN). The Base is not one monolithic group, but rather a transnational network of like-minded radicals.

As of July 2021, The Base has been responsible for five incidents—two vandalizations and three thwarted plots—in the United States. According to a CSIS data set by the Transnational Threats Project (TNT), which tracks terrorist activity in the United States since 1994, some additional Base incidents did not meet the criteria for “terrorism,” defined as the deliberate use—or threat—of violence by non-state actors in order to achieve political goals and create a broad psychological impact. However, this brief does take these acts into consideration to help identify broader trends in tactics and targets.

Regarding the tactics used in these five incidents, members of The Base engaged in two acts of vandalism, one threat/hoax, and two plots involving firearms. The majority of these incidents demonstrate a willingness to engage in violence using the paramilitary training provided by The Base. In December 2019, for example, Luke Austin Lane, Jacob Kaderli, and Michael John Helterbrand plotted to murder a married couple due to their presumed affiliation with Antifa and discussed in depth the type of guns and materials necessary to successfully execute the murder.

While The Base’s attacks account for only a small percentage of all violent right-wing extremist attacks in the United States, the group has the potential to remain an enduring and lethal threat to the United States for three main reasons: its ability to adapt and regroup, its potential to radicalize individuals through a fostered sense of community, and its consolidation of individuals with military experience.

The Base maintains a degree of insurance against full eradication due to its use of online platforms and Nazzaro’s base of operations in Russia. Despite FBI arrests of several members, The Base will be able to maintain an online presence and the flexibility to switch between encrypted messaging platforms such as Riot, Wire, and Telegram. Furthermore, as long as Nazzaro remains out of U.S. jurisdiction, he can recruit and organize for The Base while evading arrest.

The Base has also demonstrated its effectiveness in not only gathering online but also organizing its members into Trouble Trio cells that meet in real life and actively conduct paramilitary training. Base members who may have once been lone wolves are now welcomed into a social circle that reaffirms their extremist views and even includes the use of recreational drugs such as LSD and DMT.

Amid growing concern that extremism is becoming more pervasive among U.S. law enforcement officers, The Base poses a notable threat of attracting radicalized members from the U.S. military as well. According to secret recordings obtained by the Southern Poverty Law Center—in which The Base interviewed more than 100 prospective members—20 percent of those members reported being active-duty or former military, including eight in the National Guard, one in the Marine Corps, eight in the Army, and one formerly in the Air Force. A U.S. Department of Homeland Security (DHS) spokesperson even confirmed that Nazzaro worked for DHS between 2004 and 2006. The recruitment of these individuals is especially concerning due to their experience operating weapons and their formal military training, which they can pass on to other members in The Base.

As long as white supremacist violence remains a threat in the United States, government agencies should monitor The Base for its ability to gather like-minded radicals online and serve as a shared space for tactical training. Official government reports indicate that loose networks of violent extremists present the most persistent and lethal threat, and The Base will only help radicalize more individuals and provide them with the resources to potentially conduct serious violence.

Grace Hwang is a program coordinator and research assistant with the Burke Chair in Strategy and Transnational Threats Project at the Center for Strategic and International Studies in Washington, D.C.