QAnon is a “big tent” conspiracy theory that emerged in the fringe corners of the Internet in 2017. It has since amassed millions of supporters, a small portion of whom have been motivated to conduct QAnon-inspired violence, leading the FBI to label it a domestic terrorism threat in 2019. The following backgrounder provides an overview of the movement’s history, ideology, and structure, as well as the tactics and targets of QAnon extremists. It concludes that while QAnon violence has been relatively sporadic, the movement’s ecosystem is resilient and may be militarizing.

The QAnon conspiracy started in October 2017 when an anonymous user known as “Q” on the Internet forum 4chan began posting cryptic messages about the imminent arrest of Hillary Clinton. Q is an alleged government official claiming privileged access to classified information. Since 2017, they have posted thousands of messages, including ones naming other Democratic party figures as part of a secret network of nefarious political actors. Although there have been no such “Q drops” since December 2020, the QAnon movement has continued to subsist on its own.

QAnon has ideological roots in earlier conspiracy theories such as the John Birch Society’s New World Order theories during the Cold War, the Satanic Panic of the 1980s, Bill Cooper’s 1991 militia manifesto Beyond a Pale Horse, and David Icke’s writings from the 1990s. Segments of QAnon draw from the influential early-2000s internet hoax of John Titor, a military time-traveling savior. Finally, not long before Q appeared, there were various other “anon” posters claiming government insider knowledge, such as FBIAnon and CIAAnon.

By early 2018, the QAnon community had grown to tens of thousands of subscribers on multiple platforms. The conspiracy has continued to gain supporters and mainstream publicity through viral campaigns such as its on-the-ground “Save the Children” events. In 2020, there were an estimated 4.5 million QAnon accounts on Facebook and Instagram, and growing QAnon communities were identified in more than 25 countries.

Through it all, Q and the QAnon community have weathered numerous platform disruptions, demonstrating the ability to migrate, adapt, and survive. Q moved from posting on 4chan to 8chan in late 2017, then to 8kun in 2019. Since summer 2020, QAnon content faced a new wave of bans and restrictions on TikTok,Twitter, Facebook, Instagram, and YouTube—which intensified in 2021 after QAnon followers played a prominent role in the January 6 insurrection. These efforts may drive casual QAnon consumers away from popular platforms toward more fringe and extreme forums like 8kun.

At its core, QAnon holds that the world—and the United States—is controlled by a secretive, powerful group of pedophiles who worship Satan and control the Democratic party, the media, and Hollywood. President Trump won the 2016 election in order to fight the cabal, the theory proposes, and faked Russian election interference in order to collaborate with Robert Mueller against an imminent coup d’état led by prominent Democratic party officials. Relatedly, many QAnon followers also believe in Pizzagate—the more specific theory that argues Democrats are running sex-trafficking rings out of pizza parlors, especially Comet Ping Pong in northwest Washington, D.C. QAnon also prophesizes the downfall of the pedophilia ring through “the Storm,” during which members of the cabal will be arrested and shipped to Guantanamo Bay. Since its inception, QAnon has evolved to encompass a wide range of conspiracy theories, both recycling old theories—for instance, that 9/11 was an inside job—as well as amplifying novel theories, often in response to the news cycle—such as that the 2020 blast in Beirut was planned by the Rothschild family.

QAnon followers view themselves as part of an enlightened subgroup—they often implore outsiders to “do your own research” to stop being brainwashed by accepted narratives pushed by the media. Accordingly, the QAnon community is tight-knit, its followers regularly sharing the motto, “Where We Go One, We Go All” (often shortened to “WWG1WGA”). They see themselves as patriots working to protect the country from nefarious insiders, in turn echoing an age-old anti-Semitic trope claiming that Jewish interests are secretly controlling the country. Crucially, in their eyes, the theories cannot be disproved: as Travis View, an expert on conspiracy theories, writes, “Some QAnon followers even claim that failed predictions are irrelevant, because dates that pass without incident serve the purpose of tricking the evil ‘cabal’ they imagine they’re fighting.”

QAnon’s organizational structure remains unclear. The community takes its directions from Q, whose position in the movement is as much that of a deity as an extremist leader: their wisdom is absolute and their word gospel. As with most other extremist factions of the far right, the violence perpetrated by QAnon to date has been committed by lone actors. That may suggest there is little organizational coordination to violence—the community instead creates a permissive environment for airing grievances and offering advice for those willing to commit violence.

As with many modern extremist movements, QAnon exists on a variety of online platforms, emerging from the “chan” ecosystem onto more mainstream platforms such as Facebook and Twitter. Despite a number of bans and restrictions by social media companies, the movement’s spread indicates it may already be too late for piecemeal takedowns to be effective. QAnon already has support among a wide range of communities, including celebrities, law enforcement, military veterans, anti-government extremists, wellness influencers, and even members of Congress.

Since 2018, there have been at least 22 violent incidents involving QAnon believers. Only nine of these incidents meet the definition of terrorism as used in previous TNT briefs (see methodology here). For a fuller picture of QAnon, this analysis chose to include all incidents in which some element of violence was displayed, such as kidnapping and illegal gun possession. The earliest incident took place in June 2018 when Matthew Philip Wright, displaying a sign that cited a QAnon theory, drove an armored vehicle onto the Mike O'Callaghan–Pat Tillman Memorial Bridge near the Hoover Dam, causing a stand-off with police. A more recent incident took place in November 2020 when Joshua Macias and Antonio LaMotta, both with numerous ties to QAnon, were arrested for allegedly plotting to attack a vote-counting center in Philadelphia and intercept allegedly fake ballots. 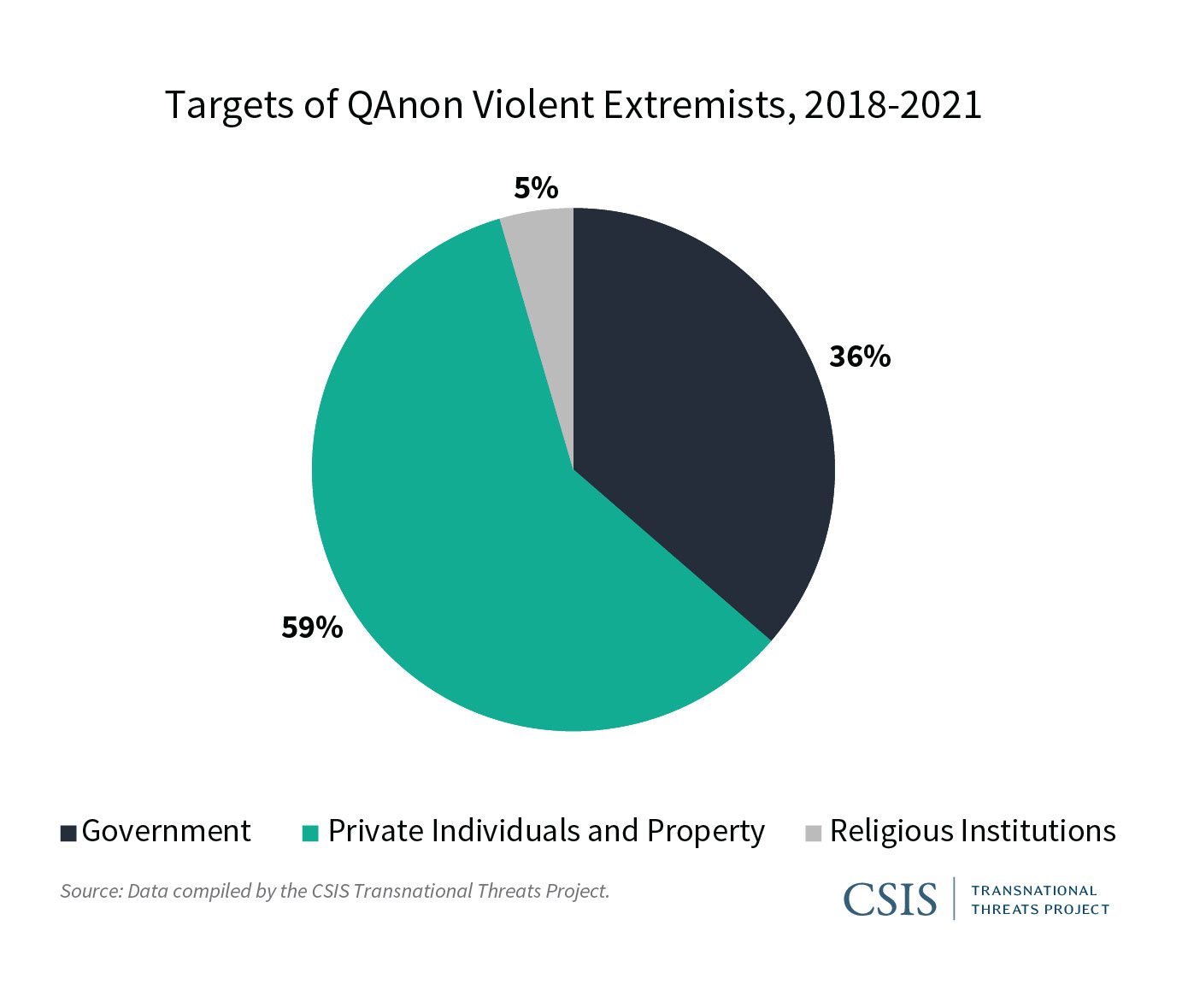 Of the 22 QAnon-related violent incidents, 13 targeted private individuals, eight targeted government entities, and one targeted a religious entity. This variety reflects the broad ideology of the QAnon conspiracy. Although Democratic presidential candidate Joe Biden was a target of a poorly planned QAnon assassination plot, so was then-President Trump—despite QAnon believers being predominantly pro-Trump. QAnon extremists have targeted both religious institutions and private individuals, typically for alleged complicity in child trafficking. QAnon supporters have also clashed with left-wing protesters, such as in Portland, Oregon in August 2020.

In terms of primary weapons, of the 22 incidents since 2018, QAnon extremists used firearms in eight cases, melee weapons in six cases, vehicles in four cases, and arson in two cases (some cases involved multiple weapons). Weapons were not explicit in four of the cases, three of which involved the kidnapping of children by estranged parents. This breakdown is in line with broader terrorism trends that show firearms are a common weapon of choice in lethal attacks regardless of terrorist orientation, but it also reflects QAnon extremists’ use of weapons of convenience, such as knives and cars.

Of these incidents, only three resulted in non-perpetrator fatalities. In January 2019, Buckey Wolfe murdered his brother with a sword, claiming he believed him to be a “lizard,” a reference to one of the more outlandish QAnon beliefs, recycled from conspiracists like David Icke. In March 2019, QAnon believer Anthony Comello shot Francesco Cali, a leader of the Gambino crime family, because Comello thought Cali was a member of the “deep state.” In November 2020, QAnon believer Neely Petrie-Blanchard shot Christopher Hallett, a leader of a “sovereign citizens” group that advocated fringe legal theories. Finally, although no victims were killed by known QAnon believers, the deadly January 6 attack on the U.S. Capitol heavily featured QAnon supporters, including Ashli Babbitt, who was killed by police as she breached the Speaker’s Lobby.

With only 22 violent incidents in three years, of which nine counted as terrorism and three were fatal, the demonstrated threat from QAnon extremists has been relatively small. For comparison, TNT data on terrorist attacks and plots record 148 far-right incidents (which include the nine QAnon attacks that meet the definition of terrorism), 34 religious incidents, and 37 far-left incidents over the same time period. However, QAnon extremism has increased every year since its inception—there were three incidents in 2018, six incidents in 2019, 13 incidents in 2020, and two incidents just in January 2021. Additionally, QAnon has the potential to be more lethal, especially when viewed as a subset of conspiracy theories more broadly. The conspiracist milieu in which QAnon resides is adjacent and sometimes overlaps with other dangerous beliefs—for example, the New World Order and the Great Replacement theories—that have inspired white supremacists and militia extremists for decades. Since October 2018, there have been at least five major mass shootings across the globe that were motivated in part by conspiracy theories; they claimed a total of 96 victims.

Political changes in Washington, D.C. have the potential to instantly and gravely worsen the threat posed by QAnon adherents. Given QAnon’s assessment of Democrats as satanic pedophiles, any Democratic gains—whether legitimate or perceived, including President Biden’s election victory—may inspire Q to retaliate under a variety of justifications, such as to “Save the Children” or “Stop the Steal.” President Trump’s political future will, accordingly, also likely factor into the movement’s threat. The variability of Q tactics and targeting so far suggests the form of violence will be unpredictable, greatly complicating counterterrorism efforts and increasing the likelihood of both more frequent and more lethal attacks.

The U.S. government is aware of the threat. As early as May 2019, an FBI assessment warned that the 2020 U.S. presidential election was likely to intensify the domestic terrorist threat from conspiracy-motivated extremists, including QAnon believers. And a March 2021 domestic violent extremism assessment by the Office of the Director of National Intelligence seemed to indicate government concerns over QAnon and related conspiracies, warning, “Newer sociopolitical developments—such as narratives of fraud in the recent general election, the emboldening impact of the violent breach of the US Capitol, conditions related to the COVID-19 pandemic, and conspiracy theories promoting violence—will almost certainly spur some DVEs [domestic violent extremists] to try to engage in violence this year.”

Along with violence, QAnon’s most threatening capability is its dissemination of online disinformation through its diverse and transnational ecosystem of supporters. Furthermore, QAnon has demonstrated it can adapt its messaging to changing times and turn any world event into a conspiracy, any person into a target. Yet some question how resilient the QAnon movement would be if Q disappeared and its core enablers and influencers lost traction on social media—Q’s noticeable silence since Joe Biden’s electoral victory has led to both a rise in violent rhetoric and fragmentation between hardcore QAnon believers and those losing the faith. Even if QAnon is but a temporary meme, dangerous conspiracy theories will not go away. As long as the Internet provides forums for fringe content, QAnon adherents will continue to perpetuate their fact-free beliefs and occasionally be radicalized to conduct violent attacks. And if QAnon does disappear, it will still have highlighted a path for both nefarious extremists and state-actor rivals to polarize and divide American society, often with violent consequences.

James Suber is a former research associate with the Transnational Threats Project at the Center for International & Strategic Studies (CSIS) in Washington, D.C. Jacob Ware is a researcher studying far-right terrorism and countering violent extremism.