Animal rights extremists, a subset of ecoterrorists, aim to end the real or perceived abuse and exploitation of animals through sabotage and violence. This analysis provides an overview of the movement’s history, ideology, organizational structure, and targets and tactics in the United States. It concludes with an assessment that while animal rights extremists intend to achieve their objectives by causing maximum economic and physical damage, the threat they pose to the United States is at a historical low.

The origins of the modern animal rights extremist movement in the United States have ties to British activist Ronnie Lee and the Hunt Saboteurs Association (HSA), a group formed to sabotage hunting expeditions as they were underway. Lee was first a member of the HSA, but he later created an offshoot group, Bands of Mercy, to prevent hunts from ever occurring. He called for the use of more radicalized action and founded the Animal Liberation Front (ALF) in 1976 as an umbrella organization for any activist willing to engage in violent action in order to combat industries perceived to be violating animal rights.

The British ideas and inspirations of the animal rights movement migrated to the United States. In May 1977, activists affiliated with the Undersea Railroad released two dolphins into the ocean from the University of Hawaii’s Institute of Marine Biology. A U.S. branch of the ALF began operating in 1979, when they orchestrated a raid to free laboratory animals from New York University’s Medical Center.

By the 1990s, the ALF established itself as the most infamous and damaging animal rights group in the United States. For example, one cell conducted a string of 20 arsons from 1996 through 2001, which caused $40 million of damage to government facilities, such as ranger stations, wildlife facilities, and a police department; private companies, such as meat packing companies, a ski resort, a lumber company, a truck center, and a farm; an educational institution, such as the University of Washington Horticultural Center; and infrastructure, such as a power line. In May 2005, FBI and Bureau of Alcohol, Tobacco, Firearms and Explosives (ATF) officials stated that “violent animal rights extremists and eco-terrorists now pose one of the most serious terrorism threats to the nation,” and the ALF was listed as a domestic terrorist threat in a 2005 Department of Homeland Security (DHS) internal planning document.

In coordination with private corporations, the U.S. government conducted a targeted campaign to arrest and indict ALF members during the mid-2000s. Activists have labeled the legal action as the Green Scare, claiming that law enforcement unjustly targeted animal rights extremists despite the lack of any casualties resulting from related attacks. 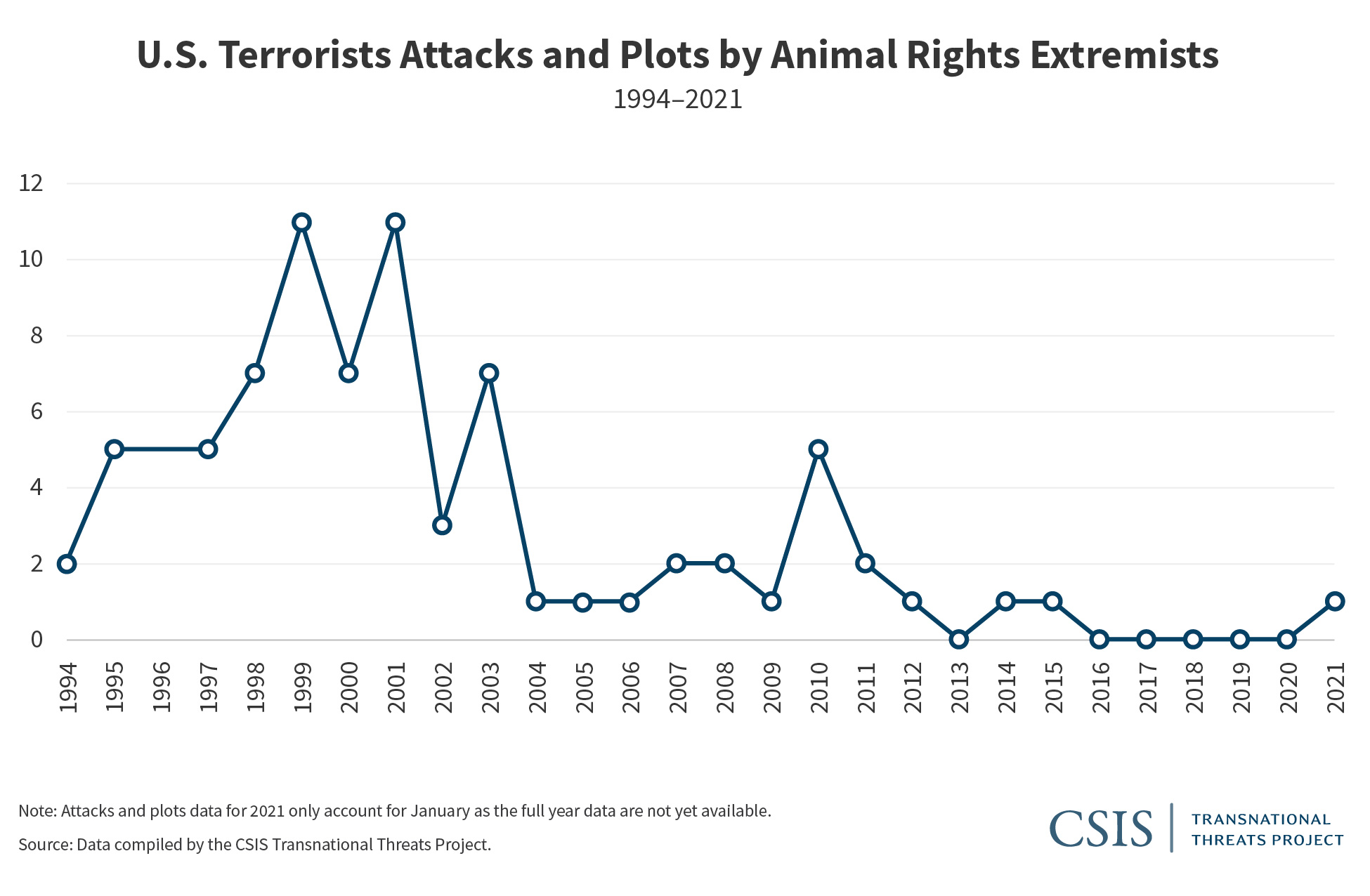 Animal rights extremists regard Peter Singer’s Animal Liberation as a core ideological foundation for the movement. Singer proposed that the interests of humans and the interests of animals deserve equal consideration based on the utilitarian principle that morally correct actions are determined by the extent to which they maximize pleasure and minimize pain. The movement also draws inspiration from U.S. philosopher Tom Regan, who argued on a similar basis that because some animals have the cognitive ability to feel pain, they should be treated with the same moral standards as humans.

Animal rights extremists seek to permanently end major inequities to animals, which they deem as exploitation and abuse. First and foremost, extremists are motivated to end speciesism, which is defined as the discrimination of beings on the basis of their species. They are also opposed to vivisection, or surgery conducted on a living organism for the purpose of experimentation. Animal rights extremists will not settle for animal welfarism—the general improvement of conditions for animals—but instead aim to achieve full equality for animals by imposing the greatest costs on private companies, educational and medical facilities, and individuals involved in these activities.

Animal rights extremists believe their actions are extensional self-defense, in which human beings act as proxies to protect animals. They have likened the concept to the legal principle of necessity defense, when an illegal act is necessary to avoid imminent harm. Extremists believe that since animals are unable to defend themselves, humans are morally obligated to engage in acts of sabotage or violence on their behalf.

The animal rights extremist movement relies on grassroots organization and activists who engage in “direct action” against companies or individuals that exploit animals. This may include removing animals from facilities that conduct experiments, arranging veterinary care for animals, or relocating animals to sanctuaries. One example occurred in 2011 when activists entered a mink ranch in Gifford, Washington, and released 1,000 minks. Extremists also conduct violence against individuals associated with animal experimentation, such as in 2009, when members of the Animal Liberation Brigade set fire to a car belonging to a neuroscientist at UCLA for testing lab monkeys with methamphetamines.

Although it is often framed as a formal group, the ALF operates as a loose network of radicalized individuals or small cells that usually consist of groups of friends. Extremists can use the ALF website, which posts instructions on how to carry out attacks, conduct surveillance, and construct incendiary devices. Furthermore, volunteers for ALF release news updates—including on two websites, Bite Back and No Compromise—through which activists claim responsibility for actions. The ALF also claims responsibility through its Animal Liberation Press Office and publicizes anonymous communiqués from volunteers. Members of the ALF act covertly and attempt to remain anonymous, but the ALF maintains partnerships with public groups that offer support, such as the Vegan Prisoners Support Group and the Animal Liberation Front Supporters Group (ALF SG).

According to the TNT data, which tracks terrorist attacks and plots in the United States between January 1994 and January 2021, animal rights extremists have conducted 82 attacks and plots. This data set defines terrorism as the deliberate use—or threat—of violence by non-state actors in order to achieve political goals and create a broad psychological impact. In addition to these 82 incidents, animal rights extremists have conducted other criminal activity that did not meet these criteria, such as vandalism.

Targets of attacks and plots include facilities perceived to be violating animal rights, such as laboratories, farms, and restaurants; researchers that use animals—particularly non-human primates—for experimentation; and private companies that rely on animal testing or are affiliated with those that do. Of the targets in the 82 attacks and plots, businesses accounted for the majority at 67 percent, followed by educational institutions at 14 percent; government, military, and police personnel and institutions at 11 percent; private individuals at 7 percent; and transportation and infrastructure at 1 percent. 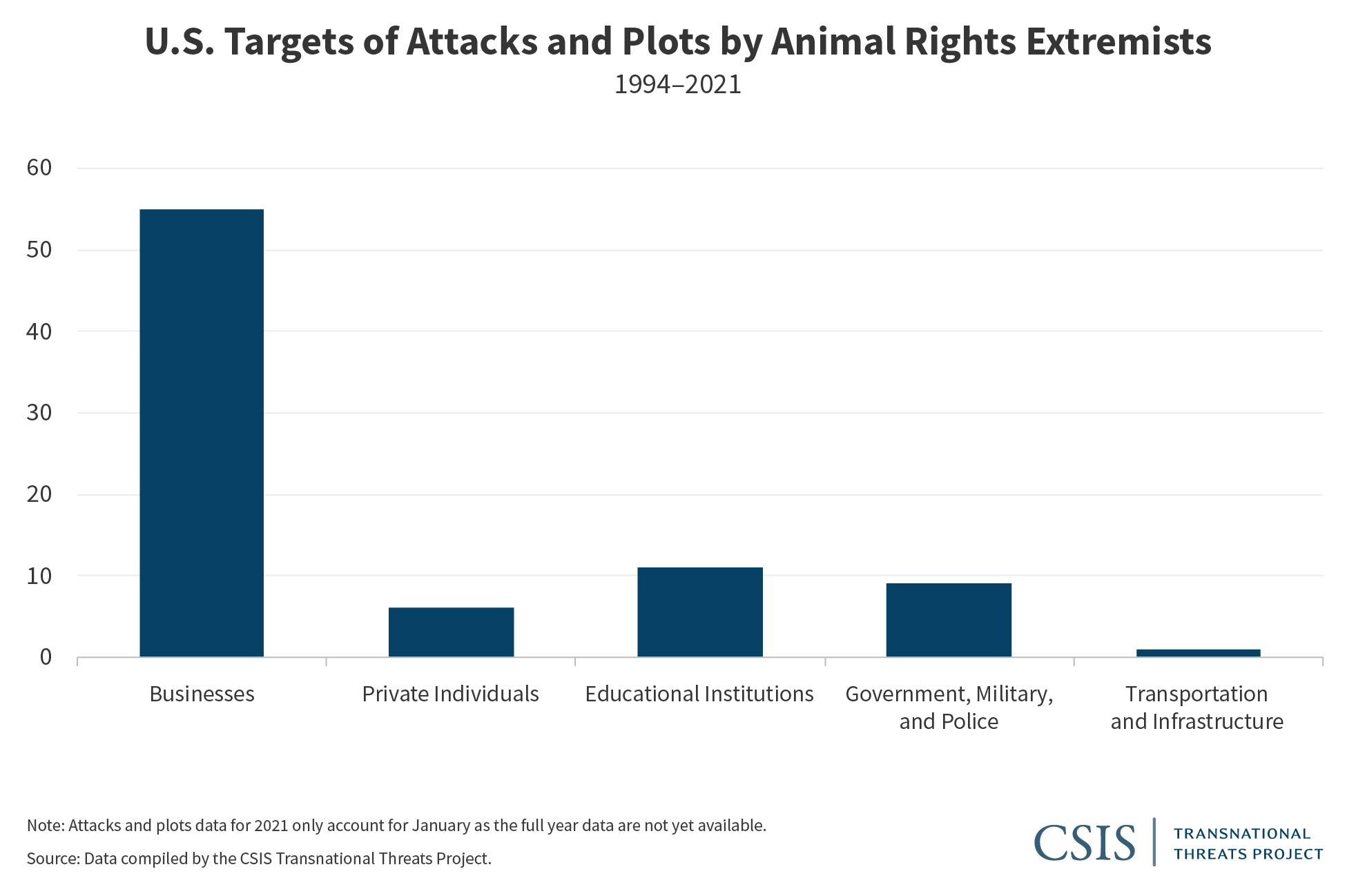 Animal rights extremists conduct attacks to cause economic losses, property damage, or major setbacks in operations. Explosives and incendiaries were used in 87 percent of incidents, the clear majority, followed by “other” in 10 percent, melee weapons in 2 percent, and threats and hoaxes in 1 percent. The 10 percent of attacks characterized as “other” involved an assortment of less traditional tactics, such as mailing letters containing razors to researchers who worked with animals. Firebomb attacks have caused significant damage, including two pipe bomb explosions at the biotechnology firm Chiron Life Sciences Center in Emeryville, California, on August 28, 2003. A threat accompanying these blasts stated, “This is the endgame for the animal killers and if you choose to stand with them you will be dealt with accordingly.” 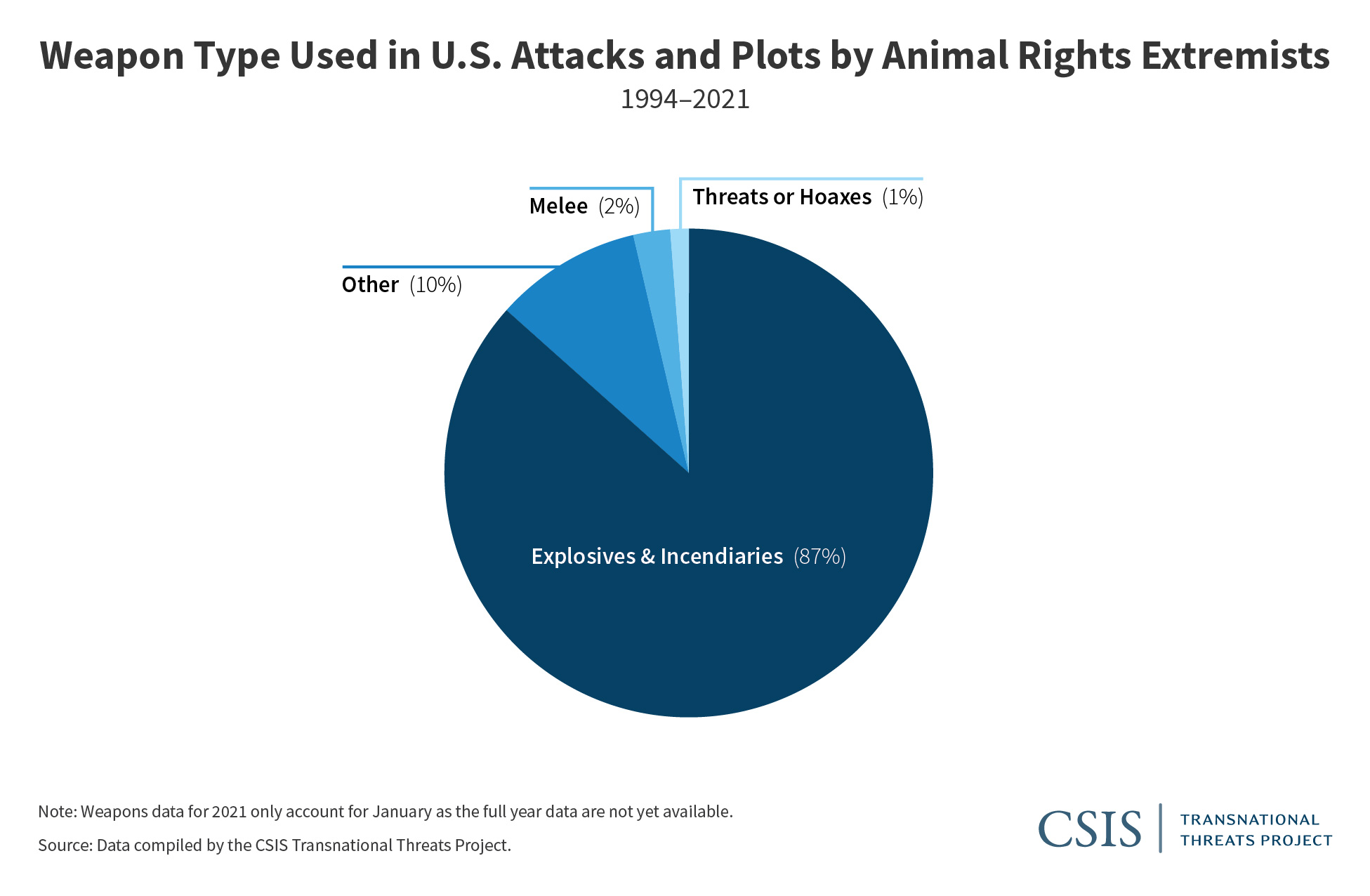 Animal rights extremists have used radical methods of sabotage and violence to cause maximum physical and economic damage in the past, such as the series of arsons conducted by the ALF in 2010. The cost of damages animal rights extremists, along with their violent environmental counterparts, caused is estimated to be more than $110 million as of 2004. While the movement is determined to persevere until all human use of animals—from husbandry to research—is completely eradicated, animal rights extremists present a low but enduring threat in the United States.

Animal rights extremists tend to target businesses as well as government and educational facilities rather than people, resulting in zero fatalities caused directly by the movement. Furthermore, by 2004—with an outlier increase in 2010—the number of attacks and plots conducted by animal rights extremists had sharply declined with only two incidents since 2015.

One explanation for the decrease in activity is the U.S. government’s response following the height of attacks during the late 1990s. In 2006, Congress passed the Animal Enterprise Terrorism Act (AETA) to federally prosecute anyone accused of acting with the intention of damaging or interfering with the operations of an animal enterprise—defined as a commercial or academic entity that uses animals for food or fiber production, research, or testing, as well as zoos, circuses, or other lawful animal competitive events. AETA increased the maximum prison time for such offenses up to 20 years. These changes, in conjunction with the FBI’s concerted investigations and arrests, resulted in increased pressure on animal extremist cells. Activists were more willing to betray their cells or become informants for the FBI.

While animal rights extremists currently present a low threat in the United States, law enforcement and government officials can view this movement as a case study on how to respond to the growing violent far-right extremist threats in the United States and the need to respond to domestic terrorism. There is currently no domestic terrorist statute in the United States, but the AETA serves as an example of how to use legal alternatives to combat domestic extremist activity. While the AETA did receive critique for its excessive punitive response, it more importantly serves as an example of the effectiveness of a unified U.S. government response to counter domestic extremism.

Grace Hwang is a program coordinator and research assistant with the Burke Chair in Strategy and the Transnational Threats Project at the Center for Strategic and International Studies (CSIS) in Washington, D.C.