The big news out of China’s annual legislative session is Premier Li Keqiang’s announcement that the 2022 economic growth target would be “around 5.5%.” The majority of media coverage has highlighted that this is the lowest target in several decades. We have a different take on the significance of this goal and its implications for other policy priorities.

Aim High
We are impressed by how high the target is: 5.5% is at the top end of all projections for Chinese growth for this year that we have found (see Figure 1). Most prominent is the International Monetary Fund (IMF), which lowered their estimate from 5.6% (October 2021) to 4.8% (late January 2022). 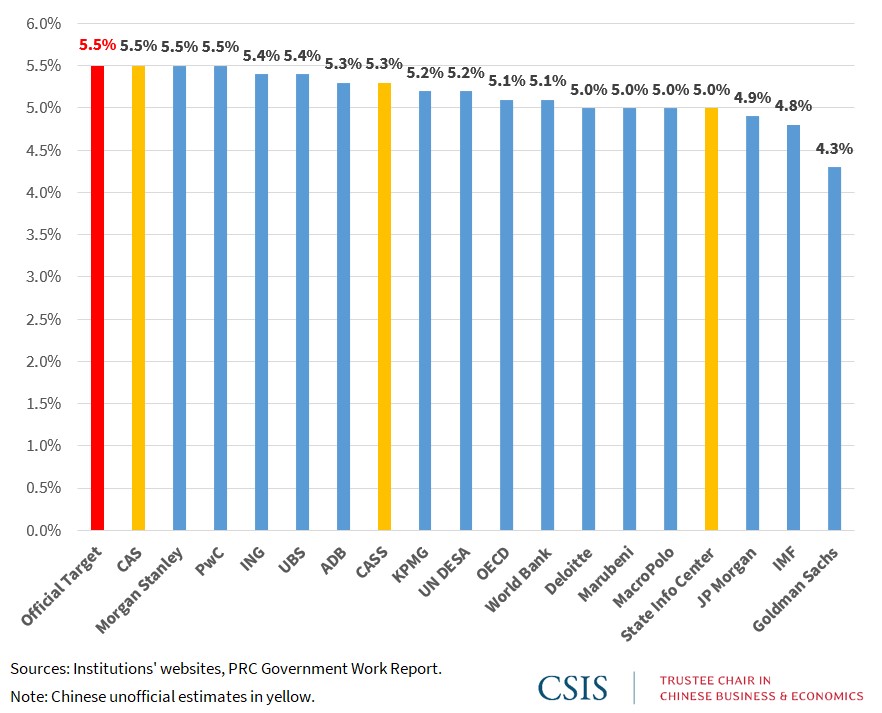 We agree with Premier Li Keqiang, who wrote in the Government Work Report (Chinese text, English summary): “Achieving this goal will require arduous efforts.” Although much lower than the 8.1% growth rate recorded in 2021, the Chinese economy faces a long list of headwinds. Domestic challenges include: lots of debt (at least 300[IM1] % of GDP), an aging population going over the demographic cliff, an unenthusiastic private sector chastened by the ongoing “common prosperity” campaign, flagging household consumption, and policy opacity and unpredictability. The international environment grows darker by the day, as relations with the United States and the West continue to degrade, and national security and resilience become the watchwords of policy everywhere. On top of that, Russia’s invasion of Ukraine is increasingly likely to further hamper trade and investment ties, and restrictions on Russian fossil fuels could generate additional inflationary pressures.

The most important figure to remember when considering China’s overall economic health and long-term growth prospects is 0.7%; that is the paltry average annual improvement in total factor productivity (TFP) that China has recorded over the last decade, compared to 3.5% in the previous decade. (An excellent source to understand these challenges is the IMF’s latest Article IV report on China’s economy, issued in late January.) This is the result of the compounding consequences of year after year moving away from a market-driven economy to one dominated by state decision-making and support for politically loyal companies and trophy projects.

A central consequence of years of misguided policies and a desire to achieve a relatively high rate of growth in 2022 means that this year’s stimulus will be larger than most have expected. No, China will not repeat something akin to their 2009 four-trillion yuan funding injection; but we can expect somewhat looser monetary policy, an increase in fiscal transfers to local governments, and a sizeable jump in the use of retained earnings from state-owned enterprises for public investment.

Why has China decided to aim high for growth? Simply, the most important political event on the calendar is the 20th Party Congress, slated for the Fall, and nothing should get in the way of Xi Jinping’s re-appointment for a third term as General Secretary of the Party. Hence, spend.

Aim Low
In contrast with a higher growth target, the leadership is showing zero signs that it is wavering from its zero-Covid strategy.

At the end of 2021, the Party’s Central Commission for Discipline Inspection concluded that China’s “dynamic zero-Covid” policies had proved cost-effective by isolating affected communities and allowing others to operate normally. The latest Government Work Report praised the successful implementation of control measures and did not include any adjustments to current policies. Moreover, as far as we can tell, none of the roughly 6,000 representatives of either the National People’s Congress (NPC) or Chinese People’s Political Consultative Conference (CPPCC) in Beijing for the annual sessions said anything about Covid that would put them out of step with the official line. The runaway number of cases in Hong Kong has not disrupted this framing in the least. Beijing’s response, instead, has been to tell local Hong Kong officials to “shoulder their responsibility and uphold their oath of office” to get the outbreak under control. Although there may be internal debates or discussions about the strengths and weaknesses of zero-Covid and potential options during small group meetings, they are occurring entirely outside our vision.

Our expectation still is that China is unlikely to abandon zero-Covid before late this year, until after the 20th Party Congress and when there is a credible domestic mRNA vaccine ready to be widely distributed across the country. Pressure may begin to mount, not from slowing growth, but from watching much of the rest of the world safely resume normalcy, including extensive international travel. That sense of distinctive growing isolation may prod Beijing to more quickly approve modest adjustments, such as creating targeted “closed loop” systems, with shorter quarantine periods than is currently the case, for business travelers and their own international students.

Aim Later?
The emphasis on achieving somewhat higher short-term growth and sticking with zero-Covid is that other long-term goals, such as rebalancing the economy toward consumption and reducing inequality as part of the drive for “common prosperity,” are being put off. Gavekal Dragonomics’ Andrew Batson incisively notes that “common prosperity,” once thought to be an enduring pillar of Chinese economic policy, was barely mentioned in any of the government’s reports or discussions at the Two Sessions.

This conclusion also certainly applies to the climate space. The Government Work Report and the report by the National Development and Reform Commission (NDRC) both emphasize the need for “flexibility” in the context of assessing energy consumption and taking a “well-ordered” approach to the energy transition. This is consistent with the message coming from Beijing in recent months, which has emphasized energy security and gradualism when it comes to decarbonization.

The messaging from the two conferences does not suggest any changes to the country’s climate goals of peaking emissions by 2030 and reaching carbon neutrality by 2060. They do, however, indicate that the government is unlikely to pursue bolder climate action in the short term. By prioritizing economic growth through infrastructure spending, the government implicitly is accepting a higher level of carbon emissions.

There is one important issue that unsurprisingly is not addressed in the work report or elsewhere, and that is the implications of the Russian invasion of Ukraine for China’s energy sector. In the medium- to long-run China could benefit from less competition with Europe over gas imports and be able to purchase more commodities from Russia. But these advantages remain for now only in the realm of possibilities. Instead, it seems more likely that the near-term impact will be negative due to spikes in commodity prices that could threaten China’s economic targets. This will reinforce concerns in Beijing over energy independence, strengthening the case both for domestic coal, diversified imports, and renewables.