On March 12, U.S. president Biden, Japanese prime minister Suga, Indian prime minister Modi, and Australian prime minister Morrison attended the first leader-level summit of the Quadrilateral Security Dialogue, or Quad. The resulting joint statement pledged to deepen the nascent grouping, which arose in response to the 2004 Indian Ocean tsunami but lay dormant from 2008 to 2017, and to expand its focus beyond military exercises and humanitarian aid. Notably, the Quad leaders established three working groups to collaborate on Covid-19 vaccine distribution, climate action, and critical and emerging technologies. The technology working group is the latest of several recent efforts to formalize cooperation among like-minded countries on protecting, regulating, and developing strategic technologies. Since the election of President Biden, such proposals have gained steam, ranging from new multilateral bodies to narrowly scoped technical efforts. Yet there remain significant hurdles to the sort of broad technology partnerships envisioned.

Q1: What is the impetus for cooperation on critical technologies?

A1: The United States and its allies have a history of joint research and protection of critical technologies, dating back to British and Canadian support for the Manhattan Project. Today, China’s rapid technological advancement and ambitious industrial strategy have raised concerns in Washington and other allied capitals that Beijing will lead the deployment of emerging technologies, such as artificial intelligence and quantum computing, which could have problematic economic, strategic, and human rights implications.

U.S. policymakers worry that Chinese government-backed firms could undercut U.S. competitors, potentially pushing them out of business and eroding the defense innovation base. In addition, the ongoing semiconductor shortage and recurring fears that Beijing could limit access to strategic minerals have bolstered calls for secure, resilient supply chains. Finally, Washington and its allies have a shared interest in ensuring that the development of emerging technologies, as well as the evolving standards and regulations that govern them, align with democratic values.

Q2: What is being proposed?

A2: Given the international nature of global technology supply chains and talent, multilateral cooperation can more effectively address concerns posed by China. The Biden administration has made such coordination the cornerstone of its foreign policy agenda, and U.S. allies and partners have similarly emphasized the need to work together.

U.S. allies have made other proposals in the spirit of cooperation. In its December 2020 New EU-U.S. Agenda for Global Change, the European Commission proposed an EU-U.S. Trade and Technology Council to strengthen joint technological leadership. The United Kingdom’s March 2021 Integrated Review of Security, Defence, Development and Foreign Policy endeavors to “develop a new framework for international science partnerships” and put technology at the core of alliances. Japan maintains roughly 160 joint scientific research collaboration projects with the United States and has been supportive of expanding the Quad format to cover emerging technology.

Outside policy experts have also tabled various ideas, such as an informal “Technology 10” forum that would coordinate on global standards and supply chains with variable, issue-specific membership.

Q3: Where do the proposals diverge?

A3: While all under the aegis of allied technology cooperation, the proposals differ on scope. Most cover technology protection and standard-setting, but some also include joint development efforts and even competition policy harmonization.

Among official proposals, the European Commission’s Trade and Technology Council is the broadest. The plan encompasses “developing compatible standards and regulatory approaches for new technologies, ensuring critical supply chain security, deepening research collaboration, and promoting innovation and fair competition.” Notably, the document links trade and technology issues and emphasizes the imperative of “solving bilateral trade irritants that weaken our strategic partnership.” Unlike other frameworks, the European Commission’s proposes that competition policy—a complicated subject for Washington—be discussed in a “transatlantic dialogue on the responsibility of online platforms and Big Tech.”

The Biden administration has not yet put forward a detailed, public vision for technology cooperation. Several senior White House officials worked on technology collaboration frameworks before joining the administration, and early reporting indicates that they will adopt a flexible approach, organizing variable coalitions of industry-leading countries. However, the specifics remain vague, with the potential scope of such groups ranging from technical standard- and regulatory-setting partnerships, technology-control coordination, alignment of supply-chain management, and more ambitious joint R&D efforts.

The Quad’s emerging and critical technology working group represents the first concrete step toward a “tech alliance,” but it has a much narrower scope than the EU and U.S. proposals. The White House factsheet lists five areas of focus: principles for technology design, development, and use; technology standards development; telecommunications deployment and diversification of suppliers; monitoring critical and emerging technology trends and opportunities; and critical technology supply chains. At this point, the action items are mostly dialogues, and leaders will likely prioritize the Quad’s joint vaccine efforts in the short term.

Q4: What are the roadblocks to deeper cooperation?

A4: Behind all the enthusiasm for cooperation, there are three primary obstacles to a potential “tech alliance”: different interpretations of the challenges posed by China, existing policy irritants, and economic competition among U.S. allies and partners.

While Washington and its allies share anxieties over China’s rise, they view the specific challenges from different perspectives. In his first speech on the Biden administration’s foreign policy vision, Secretary of State Blinken labeled China “the biggest geopolitical test of the 21st century” and recognized that the bilateral relationship “will be competitive when it should be, collaborative when it can be, and adversarial when it must be.” Brussels adopted similar language in its 2019 Strategic Outlook on China, which identified Beijing as simultaneously a cooperation partner, negotiating partner, economic competitor, and systemic rival. Yet the transatlantic powers have prioritized different aspects of the multifaceted relationship, with Brussels concluding a hard-fought comprehensive agreement on investment with Beijing just weeks before Blinken said he agreed with the Trump administration’s determination that the Chinese government is committing genocide in Xinjiang. Other vital partners have been careful not to publicly oppose China. While the readout of recent U.S.-Japan officials’ meetings heavily criticized Beijing’s behavior, the summary of U.S.-Korea meetings the following day did not mention China.

Existing policy disputes and differences, if left unresolved, will also hinder efforts at cooperation. The European Commission’s Trade and Technology Council agenda urges resolution of “bilateral trade irritants,” referring to U.S. national security tariffs on European steel and aluminum and retaliatory duties over subsidies to Boeing and Airbus. A greater test for policymakers lies with reconciling divergent visions of data governance and competition policy, which will shape the nature of emerging technology development.

Finally, while allies share strategic interests, they are also fierce economic competitors. Countries in a potential tech alliance are racing with each other to lead in emerging technologies, with large public investments in batteries, artificial intelligence, and semiconductor manufacturing capacity, among others. Such efforts could be interpreted as discriminatory industrial policy; Brussels has already voiced concerns that recent “Buy American” initiatives could violate World Trade Organization rules.

While these challenges are significant, they are not insurmountable. Views of China have been converging across key U.S. technology partners, albeit at different speeds. There have been positive early indications from the Biden administration that it is willing to compromise on long-standing U.S.-EU irritants, such as a global digital services tax and the Boeing-Airbus dispute. Going forward, how the Biden administration approaches data governance and builds out its “Buy American” program could determine whether deeper allied technology cooperation is possible.

Matthew P. Goodman is senior vice president for economics at the Center for Strategic and International Studies (CSIS) in Washington, D.C. Dylan Gerstel is a research associate with the CSIS Economics Program. 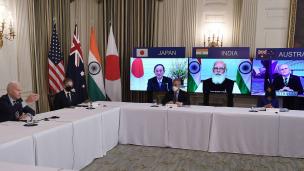 The View from Arkansas
March 17, 2021
View all content by this expert