The Art of Summitry

It has recently become fashionable to host a regional summit with African leaders. The Arab states, China, the European Union, France, India, Russia, and Turkey all established high-profile diplomatic forums with African counterparts. Japan has been one of the pacesetters, inviting African governments, as well as multilateral institutions, to attend TICAD since 1993. TICAD’s seventh iteration, which was staged in Yokohama from August 28- 30, 2019, welcomed 42 African presidents, vice presidents, and prime ministers and witnessed the signing of 110 memorandums of understanding (MOUs) with African countries and private-sector companies.1,2

The United States chaired one such event, the U.S.-Africa Leaders Summit, in August 2014. While it represented a milestone in U.S.-African diplomatic engagement, the United States has not attempted anything on the same scale since. In 2016, the U.S. Department of Commerce with Bloomberg Philanthropies chaired a second U.S.-Africa Business Forum. President Trump met with eight sub-Saharan African leaders on the margins of the UN General Assembly in 2017 and separately invited Nigerian president Muhammadu Buhari and Kenyan president Uhuru Kenyatta to the White House in 2018. If the U.S. government decides to resume the U.S.-Africa Leaders Summit, it has the potential to deepen ties between the United States and African counterparts, as well as promote trade and investment and advance signature initiatives.

A SUMMIT WITH “JAPANESE CHARACTERISTICS”


At the conclusion of this year’s TICAD summit, the  Japanese government released a communique that stressed the conference’s “unique role” as a  multilateral  forum while acknowledging that it also reflects the evolving relationship between Japan and its African counterparts.3 The summit, however, has its share of detractors; for instance, Nikkei and Asia Times columnist William Pesek called it “short on muscle [and] creativity.”4 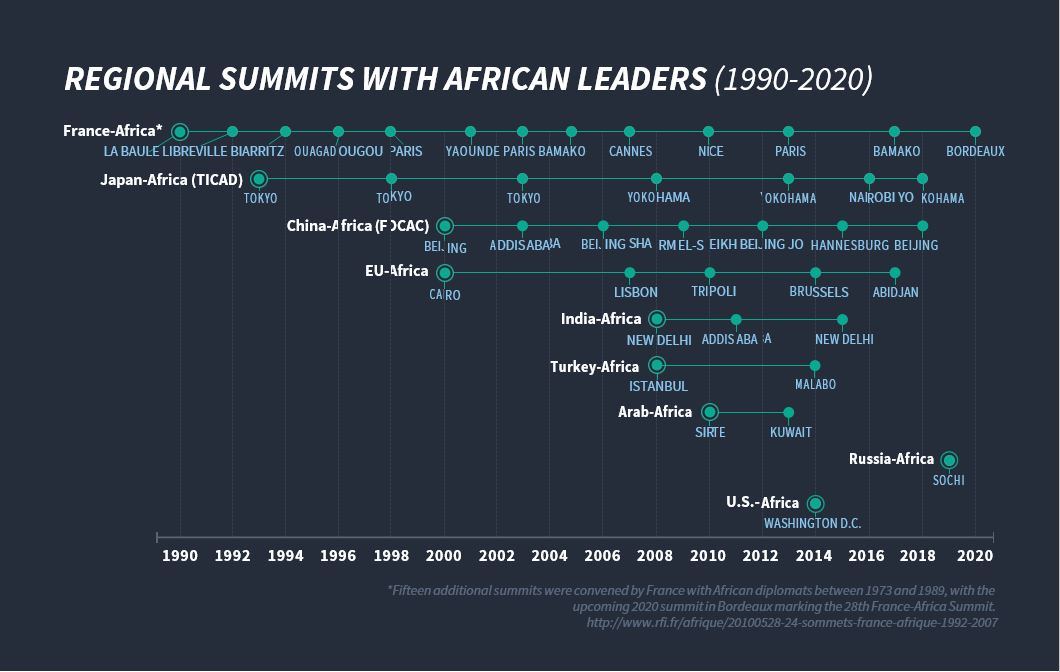 When TICAD started in 1993, it was an opportunity to reset its relations with the continent and signal its intention to step up as a leader on the world stage. Japan had previously faced criticism for its support to some of Africa’s autocrats and to the apartheid regime in South Africa;14 in fact, its trade with South Africa was so important to Pretoria that Japanese citizens were accorded “honorary white status.”15 As several countries in the region restored multiparty politics and South Africa transitioned to a multiracial democracy, Japan envisioned  TICAD as a venue to renew its ties with the continent.

Similarly, Tokyo viewed TICAD as an attractive stage to assert itself as a global leader following the end of the Cold War. Its impressive economic growth in particular enabled Japan to champion official development assistance (ODA). Indeed, Japan provided more ODA to Africa than to any other region outside of Asia. At the first TICAD, the Japanese government stated that its main objective was to demonstrate the solidarity and support of the international community to Africa.

Following TICAD III in 2003, the Japanese government came under pressure to adjust the forum’s approach. Many observers dismissed it as  a “talk shop” or “diplomatic jamboree” that seemed wasteful during a period of  economic  stagnation in Japan.16,17 In addition, African leaders, including then-president John Kufour of Ghana, argued TICAD lacked a “concrete instructional structure and machinery.”18 Finally, China, India, and other countries started hosting their own summits, which resulted in greater competition over participation and significant deliverables.

The Japanese government consequently initiated a pivot to elevate economic growth as a priority and introduced a mechanism for monitoring commitments at TICAD IV in 2008. It added the African Union as an official partner in 2010 and further emphasized public-private partnerships at TICAD V in 2012. Presumably in response to pressure from China’s Forum on China-Africa Cooperation (FOCAC), Tokyo committed to alternating its conference between Japan and Africa and moved from a five-year to a three-year cycle. It hosted TICAD VI in 2016 in Nairobi, Kenya.

UNDER PRESSURE TO STEP UP ITS GAME AND COMPETE WITH BEIJING

During the past decade, TICAD has reinvented itself in response to a shifting orthodoxy on aid and the return of geopolitical competition. TICAD has pivoted from a forum which championed official development assistance in a multilateral setting to an event that promotes private-sector and bilateral ties. Japan’s earlier emphasis on development assistance was increasingly discordant with the “trade, not aid” approach and large-scale debt relief in 2005. Japanese officials presumably agreed with one scholar’s view that “doubling the amount of ODA (official development assistance) won’t attract Africa’s interest anymore.”19 Recent TICAD summits have consequently elevated trade and investment, prioritizing economic growth over traditional development assistance.20 This transition also answered demands from the private sector: 76 percent of Japanese companies in Africa have asked for more support from the government, according to the latest survey by the Japan External Trade Organization (JETRO).21

More importantly, Japan has rebranded TICAD because it faces increased competition from China and other countries for leadership and influence in sub-Saharan Africa. During the recent summit, China was the elephant in the room. While TICAD was once one of the preeminent summits with Africa, it is increasingly overshadowed by China’s FOCAC, as well as Indian and EU summits. In addition, Japan’s private sector is losing ground to Chinese companies and other foreign businesses. Japan’s overall trade with Africa is just a fraction of Africa’s trade with China. According to data compiled by the Massachusetts Institute of Technology, Japan’s exports to the continent totaled $7.8 billion in 2017, while imports were $8.7 billion.22 Japan is not just falling behind to China; according to the Financial Times, Japan is now sub-Saharan Africa’s sixth largest trading partner, following India and the United Arab Emirates.23 The reality of Japan’s declining economic and diplomatic position is almost certainly a driver of some of TICAD’s changes. 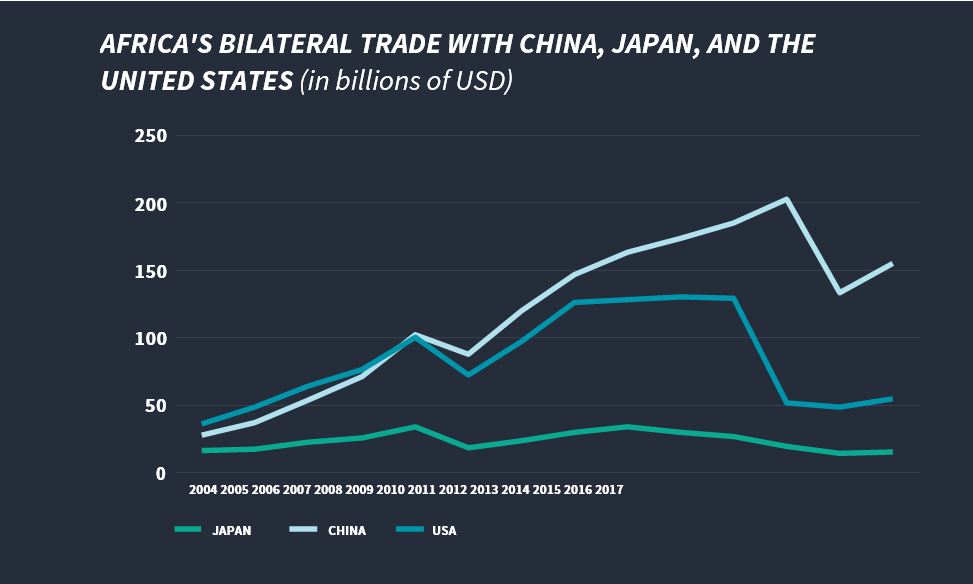 TICAD AND THE VALUE OF SUMMITRY

TICAD’s seventh edition presents an opportunity to assess the utility of regional summits, specifically during a period of great power competition. Moreover, Japan’s model underscores some of the differences between forums hosted by democracies and those led by autocracies such as China and Russia.

Based on a literature review, interviews, and firsthand observations from TICAD, it is possible to separate the strengths of regional summits into six bins.

However, TICAD also reveals some of the drawbacks of regional summitry. While once a prototype for these events, TICAD has been eclipsed by China’s FOCAC and is consistently under pressure to match the Chinese forum’s flashy headlines and high-profile attendance. TICAD’s last offering underscored three main shortcomings to hosting regional events with African leaders.

OPPORTUNITIES FOR PARTNERSHIP BETWEEN JAPAN, THE UNITED STATES, AND AFRICAN GOVERNMENTS

Japan’s recent initiatives, including a permanent joint council and trade insurance to cover infrastructure related exports and loans, closely aligns with African priorities and U.S. policy in sub-Saharan Africa. Below are four areas of convergence.

THE CASE FOR REVIVING THE U.S.-AFRICA LEADERS SUMMIT

Japan’s experience with seven TICAD conferences underscores the advantages of regional summitry. While not without its criticism and costs, Japan’s commitment to regularly host African leaders and adjust its approach in response to new geopolitical pressures is a model for the United States to emulate. In 2014, the United States convened its first and only regional summit with African leaders. Like TICAD, it attracted a large number of African leaders and inspired a dizzying array of side events, from investment forums to an after-party hosted by the ONE foundation.39 The event garnered $37 billion in commitments, launched new initiatives, and elevated U.S. engagement with Africa’s next generation of leaders. In fact, it was the single biggest engagement of any U.S. president with African leaders in history. Former special assistant to the president and senior director for African affairs at the National Security Council Grant Harris explained that the summit, especially the CEO forum, was meant to “showcase economic opportunities across the continent and propel deals between American and African companies.” More broadly, he said the summit was “an incredible opportunity to make and lock-in commitments on issues from good governance and security to electricity access and support for young leaders.”40

The U.S. government has an opportunity to restart the U.S.-Africa Leaders Summit, showcasing new policy initiatives and renewing its commitment to engaging the region. It is important that the event includes themes that align with the president’s style of engagement instead of simply replicating a format that was tailored for President Obama. The White House also should set aside resources, designate a “czar” to lead the process, and map out a yearlong plan to ensure a successful event. As former assistant secretary of state for African affairs Johnnie Carson explained in 2016, the U.S.-Africa Leaders Summit was a high point, and it is crucial that the summit “does  not become a one-off event.”41

This brief was made possible with generous support from the Embassy of Japan.


CSIS Briefs are produced by the Center for Strategic and International Studies (CSIS), a private, tax-exempt institution focusing on international public policy issues. Its research is nonpartisan and nonproprietary. CSIS does not take specific policy positions. Accordingly, all views, positions, and conclusions expressed in this publication should be understood to be solely those of the author(s).