Overall, Australia’s hydrogen strategy is more focused on economic goals than it is on climate goals. Hydrogen production is seen as an opportunity to diversify the economy, attract investment, and reach new export markets. The country’s approach is guided by the National Hydrogen Strategy, released in November 2019, which contains 57 recommendations for the government to act on.

The hydrogen strategy feeds into the government’s broader industrial strategy document, the Technology Investment Roadmap, as one of five priority low-emissions technologies. However, there is no whole-of-economy industrial strategy. The roadmap will be a core component of the Long-term Emissions Reduction Strategy, to be delivered at the United Nations Climate Change Conference in Glasgow in late 2021. How much these five technologies will contribute to its emissions goals is currently uncertain.

These three interrelated strategy documents reflect the current government’s “technology not taxes” approach to climate action. In the Technology Investment Roadmap, for example, one of Australia’s “priority technology stretch goals” is to bring the cost of clean hydrogen below $2 per kilogram—referred to as “H2 under 2”—making it competitive with carbon-intensive applications, such as producing ammonia, producing transport fuels, and firming electricity.1 Australia’s strategy is notable for the range of technological options it is considering, particularly its embrace of carbon capture and storage (CCS) technology to produce clean hydrogen. One aspirational project, for example, would use CCS to create clean hydrogen from brown coal in Australia’s LaTrobe Valley.

With the exception of the H2 under 2 target, none of the strategy documents include firm economic or emissions targets with regard to hydrogen, but they do include aspirational goals and various “measures of success.” Exports are a key focus of these aspirational goals. By 2030, the strategy aims for Australia to be among the “top three exporters of hydrogen to Asian markets.” Both the hydrogen strategy and the investment roadmap make many references to the “potential for thousands of new jobs . . . and billions of dollars in economic growth.” Estimates in a high-demand scenario expect an additional $26 billion in GDP and 17,000 jobs by 2050. Other prominent goals in the strategy include producing hydrogen at low-carbon intensities, with an excellent safety record, and creating a “hydrogen-ready” workforce to meet the industry’s needs.

The National Hydrogen Strategy recommends an “adaptive approach,” themed around seven areas: national coordination, developing production capacity, responsive regulation, international engagement, innovation, skills and workforce, and community confidence. The progress of government action to date varies considerably by theme, with international engagement and innovation the most advanced to date. Overall, the government hydrogen strategy is to be carried out in two phases:

As part of its first phase, the government has provided funding to 72 hydrogen projects. This funding was distributed by one of Australia’s three innovation or clean energy agencies, most of which include private co-financing and all of which are in partnership with a private or nongovernmental stakeholder. According to International Energy Agency (IEA) data, these projects add up to the second-highest quantity of zero-carbon normalized capacity in the project pipeline, after Great Britain. In operational capacity, on the other hand, the United States is comfortably atop the ladder and Australia just 24th.

Importantly, many of these projects are either explicitly designed to form the basis of a regional hub or are located in close proximity to existing infrastructure or demand sources. This is discussed further in the geography section below. The government has also made a series of investments in research, design, and development (RD&D) of hydrogen in recent years in pursuit of the H2 under $2 goal.

The government has also increased funding for the national research agency, CSIRO, to pursue a Hydrogen Industry Mission. According to IEA data, Australia spent the highest share of its energy-related RD&D money on hydrogen between 2015 and 2019. However, Australia spends just US$122 for every US$1 million of economic activity, almost a fifth of Japan’s spending and a third that of the United States (US$580 and $US347, respectively). On top of that, this figure has been in decline year-on-year under the current government. 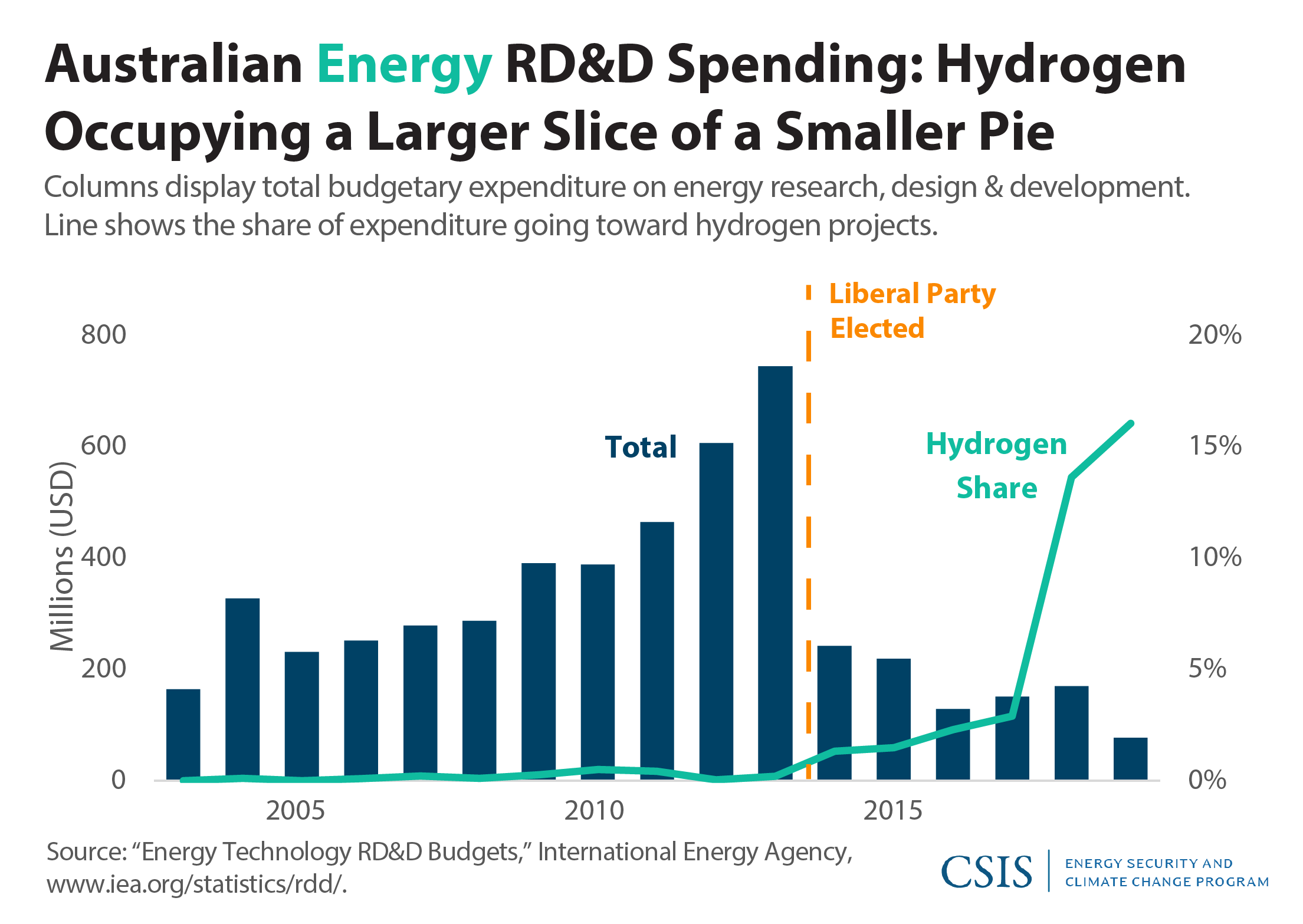 In addition to the CSIRO, the Australian Renewable Energy Agency (ARENA) is the other key institution in facilitating clean energy innovation in Australia. Launched by the previous government in 2012 as part of its climate strategy, ARENA continues to “improve the competitiveness of renewable energy technologies,” issuing $1.75 billion in grant funding to over 600 projects since its inception. In coordination with the National Hydrogen Strategy, ARENA announced in 2019 a funding round of $70 million to support renewable hydrogen projects in Australia. Through this and its conventional funding sources, over $100 million has been conditionally approved to develop three commercial-scale renewable hydrogen projects.

The other key agency in the government’s strategy is the Clean Energy Finance Corporation (CEFC), which, with a US$7.6 billion capitalization, is the largest dedicated green bank in the world. Unlike ARENA, which is a grant-making institution that often funds research as well as projects, the CEFC operates like a commercial bank and provides loans only to the demonstration, commercialization, and deployment stages of innovation. Further, the CEFC is expected to earn an average return equal to the Australian government bond rate +3–4 percentage points. In 2020, the government updated the legislation, guiding the CEFC to include a $300 million Advancing Hydrogen Fund, which, as of this writing, has not yet lent to its first project.

Another key feature of Australia’s hydrogen industrial strategy has been its proactive international engagement on the issue. This both secures future export markets and helps address Australia’s poor reputation on global climate engagement. The government is primarily focused on developing Asian export markets, particularly with Japan, which has long looked to hydrogen as a solution for its energy import problem.

In January 2020, just two months after launching the National Hydrogen Strategy, Australia and Japan released a joint statement regarding cooperation on hydrogen and fuel cells. The two countries participate in a regular Japan-Australia Energy and Resources Dialogue to further progress this relationship. A “cornerstone” in this relationship is the Hydrogen Energy Supply Chain project, which would produce hydrogen from brown coal in the Australian state of Victoria and store its carbon emissions underground. Australia has also worked with Japan to promote hydrogen in regional forums like the Association of Southeast Asian Nations and the Asia-Pacific Economic Cooperation.

In March 2020, Australia and Singapore agreed to pursue a Memorandum of Understanding on low-emissions technologies, including on hydrogen cooperation. In September 2020, Germany and Australia also announced a partnership to develop a feasibility study on a renewable hydrogen supply chain, which will spend two years examining potential trade between the two countries.

The Australian hydrogen strategy focuses heavily on developing regional clusters of hydrogen development, or what it calls “hydrogen hubs.” According to its strategy document:

Hubs aggregate various users of hydrogen into one area. Doing so minimises the cost of providing infrastructure . . . and supports economies of scale in producing and delivering hydrogen to end users. Hubs also help focus efforts for innovation and building a “hydrogen-ready” workforce.

The government’s Hydrogen Opportunities Tool shows that all its demonstration and pilot projects are located near existing infrastructure, other projects, or significant renewable energy or CCS potential. Using government modeling on Hydrogen Production Prospectivity Scenarios, the two maps below show Australia’s 72 hydrogen projects and their proximity to areas of either high renewable energy or CCS potential. The government has also identified seven priority prospective hub regions, which are also displayed. 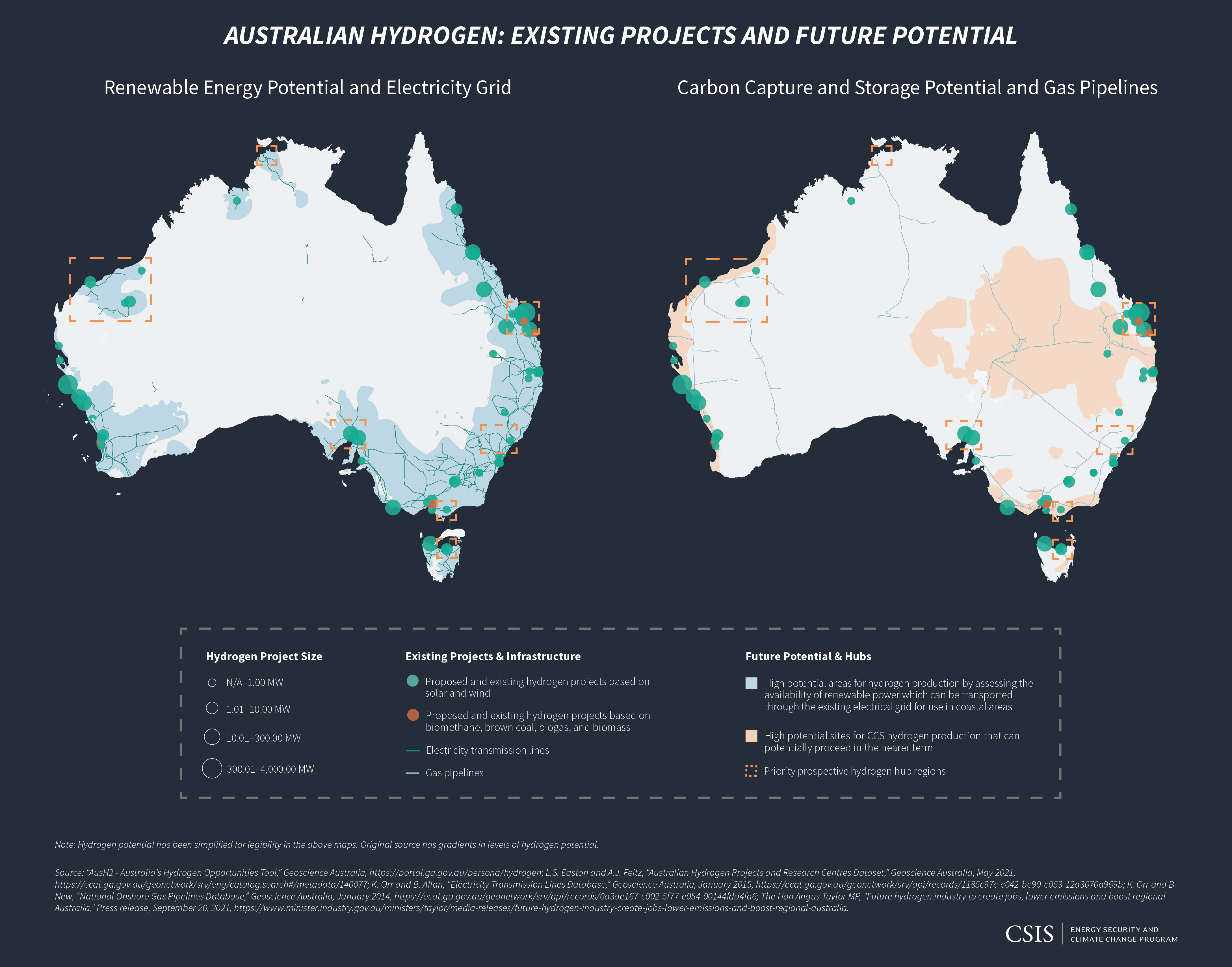 In September 2021, the government announced an additional $150 million in funding for “Hub Development and Design Grants” to support emerging hub concepts, and “Hub Implementation Grants” to help fund clean hydrogen industrial hub projects. Seven prospective locations have been identified, which, as can be seen in the maps above, match closely with existing projects and potential for either accessible renewable energy or CCS locations.

One of the more ambitious hubs is the Asian Renewable Energy Hub, located in the Pilbara region of Western Australia, which is one of the priority hub locations identified by the government. The project originally proposed exporting renewable electricity to Indonesia and Singapore via subsea high-voltage cable. In 2018, the project pivoted to the export of hydrogen, and the proposed project capacity has increased from 6 gigawatts (GW) to 15 GW. The proposal includes up to 1,743 wind turbines and 2,000 megawatts of solar photovoltaic capacity. The project is currently in limbo, however, due to its potential impact on local wetlands and migratory birds.

In terms of government policy, the Hydrogen Hub strategy is more decentralized, relying on state and local government incentives, as well as industry-led project siting proposals. Most Australian states have a state-specific hydrogen strategy, often competing with one another for new projects. For example, the state of New South Wales (NSW) released its $3 billion NSW hydrogen hub plan in October 2021, just weeks after the federal funding announcements; the plan aims to make the coal region of the Hunter Valley, and another of the federal government’s priority regions, into a future hydrogen export hub.

Lachlan Carey is an associate fellow in the CSIS Energy Security and Climate Change Program.

© 2021 by the Center for Strategic and International Studies.