Energy has long played a major role in America’s trade deficits. Today, energy is seen differently: as a commodity to be exported, one that can help narrow trade deficits. Yet the hope that energy alone can solve this macroeconomic headache is misplaced. For one, over the last decade the non-energy trade deficit in goods has widened sharply even as the energy trade deficit has disappeared; energy can only do so much without the rest of the economy following. More importantly, the forecasted shifts in the energy trade balance are small compared to what has already happened; if energy has not shrunk the deficit over the last 10 years, it is unlikely to do so in the future. Energy will still matter, of course, but do not expect it to solve this big, non-energy issue.

The Energy and Trade Deficits Delink

The United States has been a net energy importer for decades, and energy has long been a major source of America’s trade deficits. From 1974 to 1982, it was energy that pushed the trade balance in goods into deficit, as the non-energy balance was still positive. Since 1983, the energy deficit has accounted, on average, for over a third of the country’s overall trade deficit in goods. Even as recently as 2008, more than half of the trade deficit was due to energy. It is no accident, then, that successive administrations have seen “energy independence,” loosely defined, not only in energy security terms but also in trade terms. 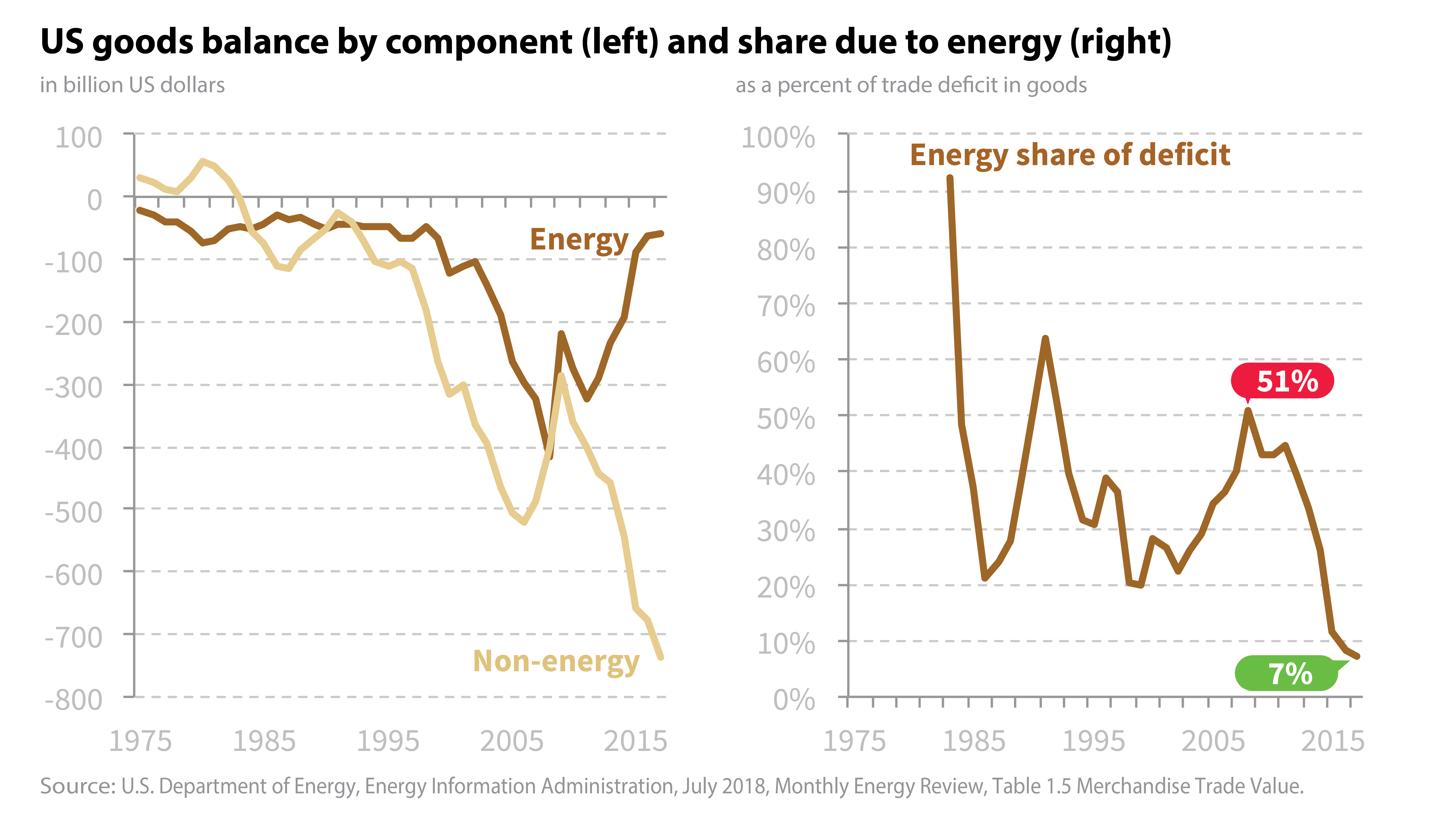 In just under 10 short years, the energy trade deficit has shrunk by 87 percent (for reasons explained below). As such, energy now accounts for just 7 percent of the overall trade deficit in goods. But the energy balance and the overall goods balance have also delinked for the first time since the 1990s. A lower trade deficit in energy has done nothing to reduce the country’s trade deficit in general. From 2008 to 2017, the energy deficit fell by $363 billion, but the non-energy deficit rose by $343 billion, with the automotive sector alone accounting for more than a quarter of that ($90 billion). Relative to 2008, America’s goods deficit is basically the same in nominal terms, down by just $20 billion. (The surplus in services has meanwhile doubled from $124 billion to $255 billion, but services tend to be short-changed in public discussions.)

There are different ways to interpret these numbers. One is to say that energy is no longer a drain on the balance of payments, insofar as “drain” is a fair term anyway. Another is to point out that by spending less on energy, Americans can import more of other goods. Yet another is to underscore the limits of what energy can do for trade imbalances: if a $363 billion shift in less than a decade has failed to lower the trade deficit, why might more energy exports do the trick? Can energy really drive change without the rest of the economy following? To answer that question, let us ask another: how much more can energy do?

How Much More Can Energy Do?

In nominal terms, the trade deficit in energy peaked in 2008 at $418 billion, before falling to $54 billion in 2017. Around 90 percent of that decline was due to oil. Net imports of crude oil fell by $230 billion from 2008 to 2017, as the country’s net imports went from 9.8 million barrels a day (mmb/d) to 6.8 mmb/d. Of that change in value, around $142 billion came from falling oil prices for crude imports, $20 billion came from more crude oil exports, and $68 billion from lower volumes imported. 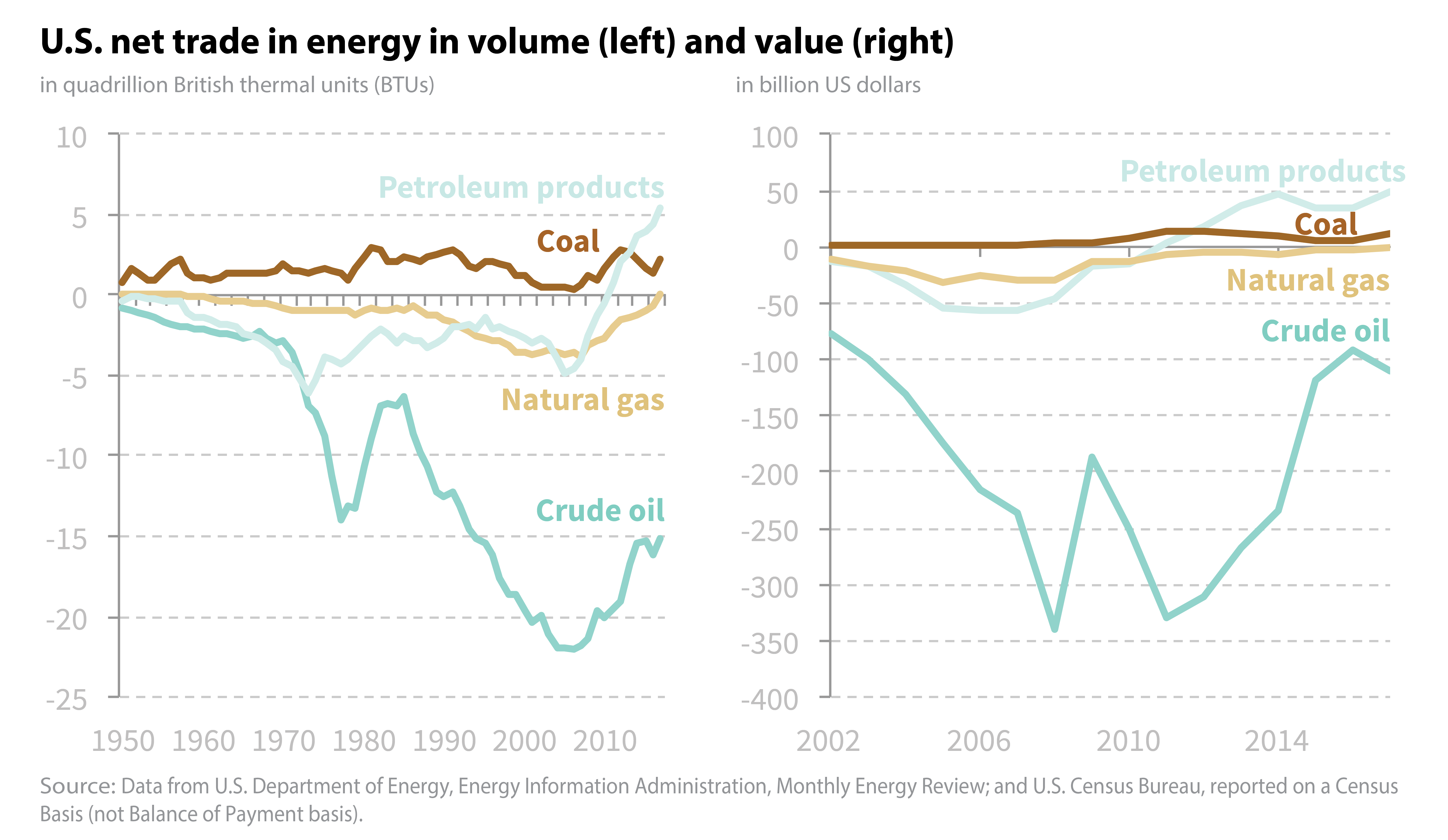 Besides crude oil, the balance in other liquids—fuel oil, petroleum products, natural gas liquids, and liquefied petroleum gases—shifted by $94 billion in total from -$45 billion to +$49 billion between 2008 and 2017, as the United States turned from a net importer (-1.5 mmb/d) to a net exporter (+2.9 mmb/d). The rest of the energy balance—coal, gas, nuclear fuels and materials, and electricity—showed a more modest change from -$32 billion to +$7.4 billion, largely due to reduced net imports of natural gas.

Looking at the next 5 to 10 years, it is oil, above all, that will shape the trade balance in energy—both because it is larger volumetrically but also because, on a unit basis, oil earns more than coal or gas. In its 2018 Annual Energy Outlook (reference scenario), the Energy Information Administration (EIA) expects that the United States will remain a net crude oil importer and a growing products exporter—until 2030, when product exports surpass crude imports. What this means for the trade balance, however, is harder to know. The United States exports higher-value crude than it imports, but it imports higher-value products than it exports. In short, the United States might see its current (2017) $62 billion deficit in petroleum wiped out in the next decade, though much will depend on oil prices and the value of what is imported and exported.

Beyond oil, coal and gas matter most. Gross exports of coal and the related fuels that the Census Bureau groups with coal were $13.7 billion in 2017, which was admittedly a high year for coal. Since 2008, gross exports averaged $11.6 billion a year, with a range from $7.7 billion to $17.8 billion (the net amount is a bit smaller since imports run around $2 to $3 billion a year). The EIA expects net exports to remain at their 2016 levels, which means there is little upside from where coal was in 2017 (and possibly lower).

Gas is the final piece of the puzzle. On the pipeline front, the United States might soon turn into a net exporter, but will remain a modest one; it is liquefied natural gas (LNG) that will drive America’s net export position (according to the EIA, by 2022 LNG exports will be 3.3 times greater than pipeline net exports). If we assume that LNG exports will fetch the same price as they did in 2017, the gross value of those exports might be $15 billion a year by the time all LNG projects under construction come online in 2022–2023. However, the 2017 price was likely underreported; assuming a more realistic price could push that value to $22 billion.

In short, relative to 2017, the United States might see much of its $62 billion petroleum deficit shrink, although the precise numbers will depend on many factors. On the coal side, there is limited upside and some downside. On gas, there is upside, but not as much as the enthusiasts would want—at least not in the grand scheme of things. It is possible that the $363 billion reduction in the energy trade deficit that occurred between 2008 and 2017 was the high point; there is still upside, of course, but it will be smaller than what the industry delivered in the last decade. If the United States wants to shrink its deficits it needs to look beyond energy and on to other sectors; energy has already done its part and can do a bit more. But the solution lies elsewhere.