The Challenges of Building a National Army in Yemen

Yemen—perhaps the most impenetrable state of the Arab world—has never managed to develop that most important of state institutions, a cohesive and effective national army. Understanding and explaining the inability of the Yemeni state to build a cohesive military has been one of the key underlying causes of past and present Yemeni instability, and a new report by the CSIS Burke Chair attempts to address these issues. Written by Senior Associate Zoltan Barany, the new report is entitled “The Challenges of Building a National Army in Yemen” and is available on the website at http://csis-website-prod.s3.amazonaws.com/s3fs-public/publication/160718_Challenges_Yemen_National_Army.pdf.

This report argues that if Yemen has been on the verge of state failure, its regular armed forces have certainly failed to execute their essential function. Not only have they failed at defending the state but, more importantly for an authoritarian polity, they have also been unable to effectively protect the regime. This report contends that the main reasons for this unflattering assessment of Yemen’s military are primarily reliance on tribal, clan, and family networks, lack of professionalism, gross mismanagement, and deep-seated corruption, in other words, the very same ills that have done so much harm to the Yemeni state at large. The seemingly inherent conflict between the state and the tribes as well as the fragmentations of and the divisions between various military forces, are long-standing attributes of armies in Yemen that are unlikely to change in the foreseeable future.

Throughout the paper the author underscores two key aspects that are crucial to the understanding of Yemen’s political history and current state of affairs. The first is the virtually constant struggle between those who wanted to increase state authority (most prominently, the central government) and those who privileged traditional tribal influence in politics. There is no better institution to observe this ongoing conflict between “centralizers” and “tribalists” than the armed forces. The second important factor to grasp is that domestic conflicts in Yemen are not binary, one foe opposing another, but multipolar with certain groups—including both state and non-state actors—cooperating with one another on some issues but not on others. Moreover, the positions of individual actors often fluctuate in response to various impulses—inancial, political, psychological—in their environments. This is the main reason that Yemen’s contemporary predicament is so enigmatic, so intractable, and, ultimately, that lasting peace has been and will continue to be so difficult to hammer out.

The study proceeds in three main parts. In the first, it considers Yemeni armies from before the country’s independence to the 1991 unification of the two Yemeni states, the Yemen Arab Republic and the People’s Democratic Republic of Yemen at the end of the Cold War. In the second part the focus shifts to Yemeni military politics in the two decades from unification to the resignation of President Ali Abdullah Saleh following the 2011 uprising. Finally, the third section analyzes the widening chaos, President Abd Rabbuh Mansur Hadi’s feeble efforts to ward off anarchy and reform the military, the various related security threats to the Yemeni state from 2011 until mid-2016, and the thus-far-unsuccessful campaign of the Saudi-led coalition of forces tasked with reinstating Hadi and defeating the Houthi insurgency. 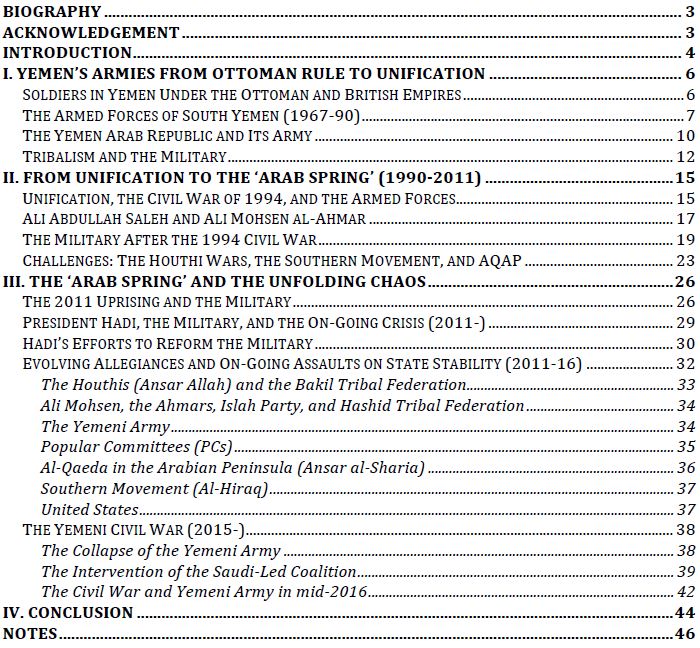