The China-Pakistan Economic Corridor at Five

The China-Pakistan Economic Corridor (CPEC), a flagship of China’s Belt and Road Initiative (BRI) that was off icially launched in April 2015, promised transformational gains. Five years later, a quarter of announced projects have been completed, energy projects dominate, and industrialization efforts are lagging, according to data collected by the CSIS Reconnecting Asia Project and made available to the public here.

Since the CPEC’s official announcement in 2015, Chinese and Pakistani officials have declared it a success. “Good progress has been made in building the China-Pakistan Economic Corridor,” Xi Jinping told Pakistan’s parliament during his visit in April 2015. (While the CPEC has a much longer history, and includes projects started earlier, Xi’s visit marked its formal announcement.) Three years later, a joint statement declared: “As a signature project of BRI, the fast development of the CPEC has played a significant role in the Belt and Road cooperation.” At last year’s Belt and Road Forum, Pakistani Prime Minister Imran Khan said: “The China-Pakistan Economic Corridor, one of the BRI’s major components—and one of its earliest manifestations—has made substantial progress.”

Using official targets, however, the CPEC has underperformed. “By 2020 . . . major bottlenecks to Pakistan’s economic and social development shall be basically addressed, and the CPEC shall start to boost the economic growth along it for both countries,” a joint planning document promised in 2017. By 2018, Pakistan was again facing unsustainable debt levels and sought assistance from China, Saudi Arabia, and the United Arab Emirates. In 2019, Pakistan received a bailout from the International Monetary Fund, and its economy mostly appeared to be moving in reverse: growth slowed to 3.3 percent, inflation hit a five-year high, and deficits soared. The CPEC is not responsible for all Pakistan’s troubles, of course, but it has exacerbated long-standing challenges.

Progress on the ground provides some clues, revealing where projects have succeeded and failed and illustrating how the CPEC’s grand ambitions have been scaled back. Of 122 announced projects, only a quarter (32 projects) have been completed, or roughly $20 billion of the estimated $87 billion in funding. Less than half (54 out of 122 projects) are completed or under construction. These activities reflect a broad definition that counts projects announced by either side as well as media reports associating them with the CPEC. Dropping large projects that have been shelved, such as the Diamer-Bhasha Dam, the Pakistan-Iran gas line, and the Muzaffargarh Coal Power Project, brings the overall total to $67 billion.

Announced project funding (excluding national and cross-border projects) is distributed roughly evenly across Pakistan’s provinces, with the exception of the most developed (AJK) and two least-developed provinces (Balochistan and FATA). This has played out in project completion rates as well, with the most and least developed provinces having no completed projects so far, and the moderately developed provinces of Punjab and Sindh approaching completion rates of 50 percent. Two of the three provinces with no completed projects (excluding cross-border links), AJK and Gilgit Baltistan, are located in Pakistan-administered parts of the Kashmir region in dispute by India and do not have representation in Pakistan’s national parliament. 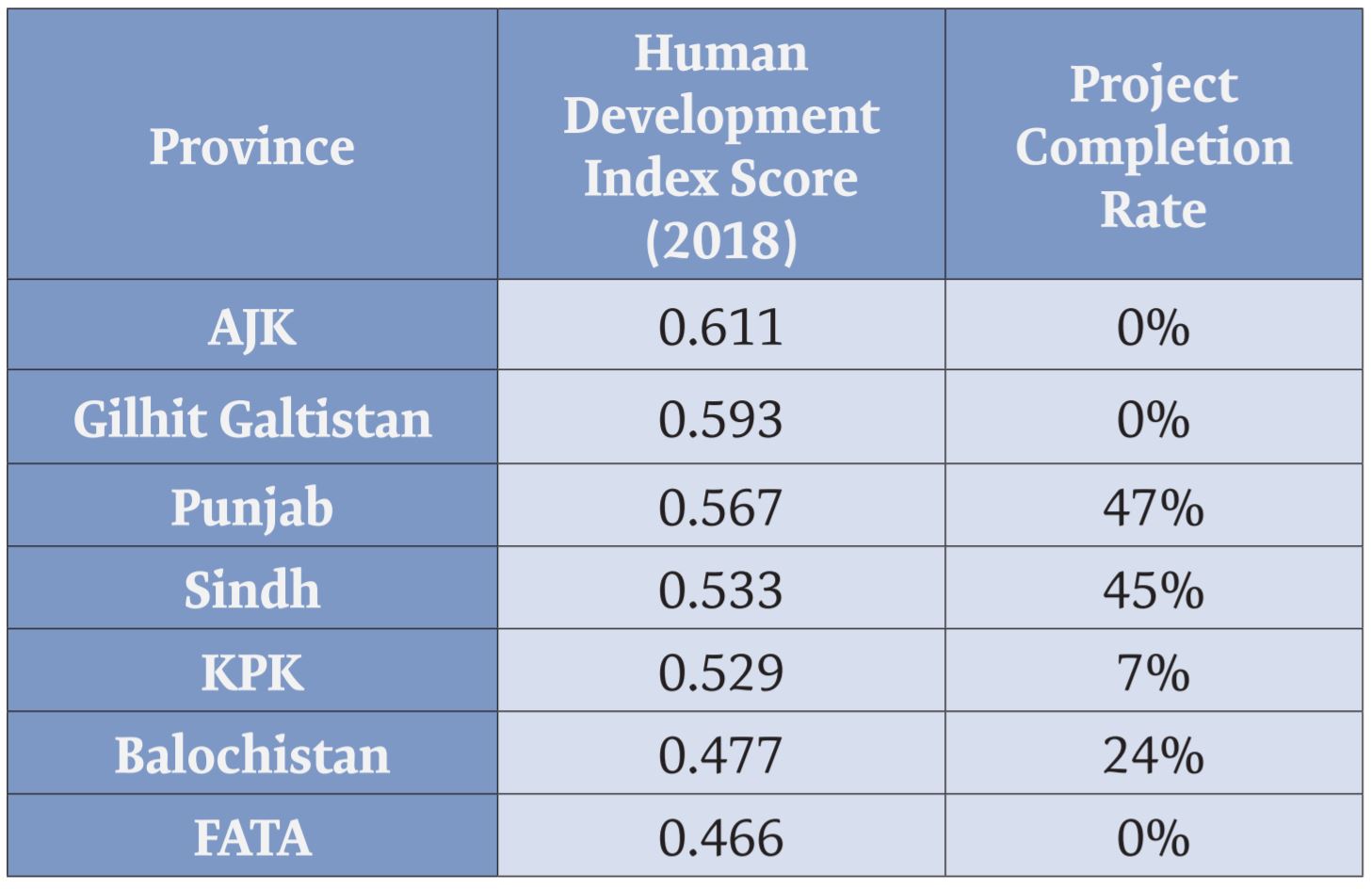 While still lagging behind Punjab and Sindh, Balochistan has fared slightly better than other provinces, with 24 percent of announced projects complete to date and announced funding levels above the national per capita average (although per capita comparison’s across provinces are difficult due to incomplete population statistics). Balochistan is home to Gwadar port, the CPEC’s “anchor” and the site of more than half of the province’s projects, as well as some of the CPEC’s strongest opposition. 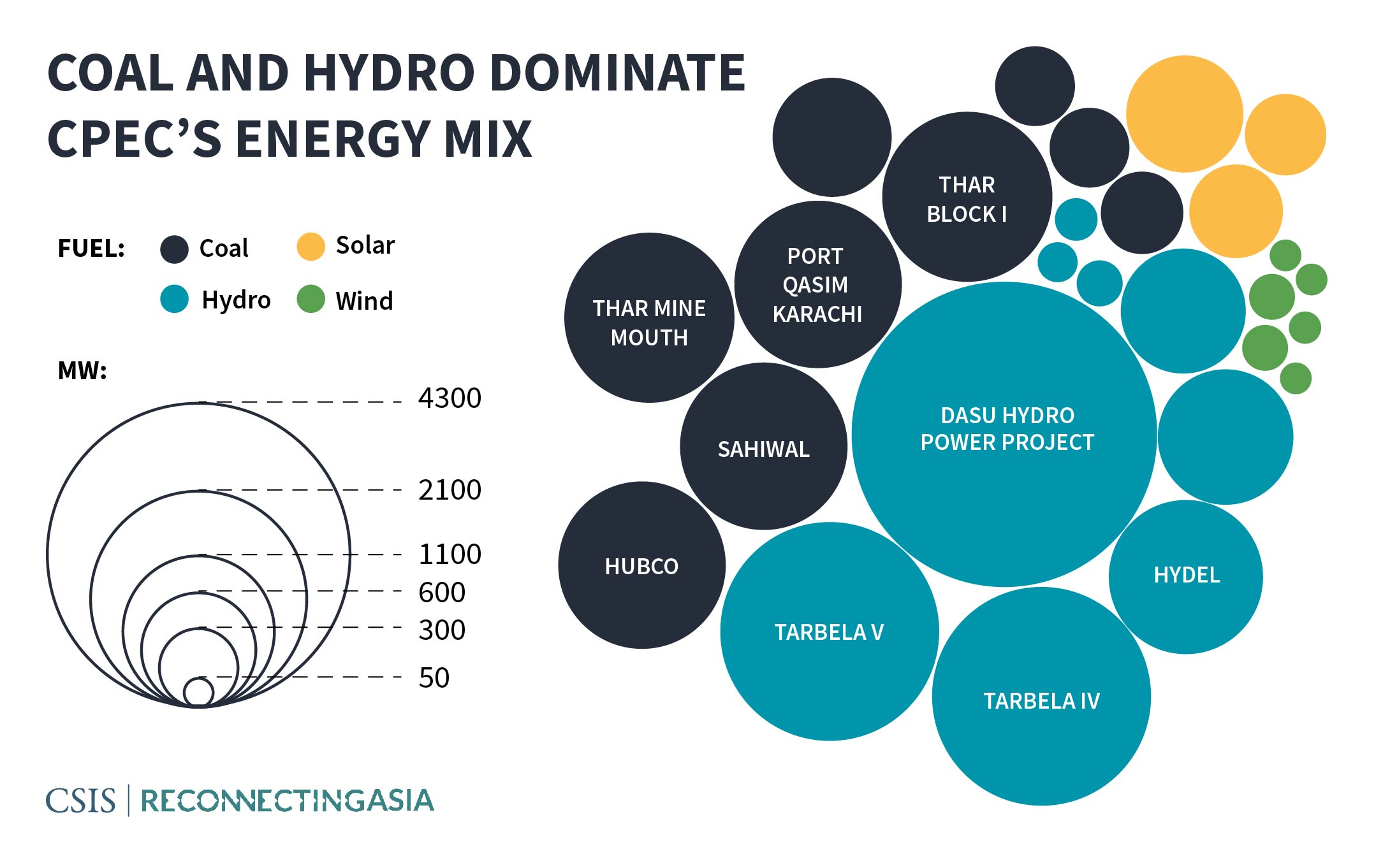 Pakistan currently faces an energy deficit of 3,000 MW during peak demand—an issue that successive governments have made a top priority for the CPEC since 2013. Although energy projects, including power plants, pipelines, and transmission projects, account for nearly two-thirds of announced funding, much of that is concentrated in large projects that have since been delayed or shelved.

STUCK ON THE VALUE CHAIN

The CPEC’s supporters claimed it would help industrialize Pakistan, turning it into a manufacturing hub. “CPEC will greatly speed up the industrialization and urbanization process in Pakistan and help it grow into a highly inclusive, globally competitive and prosperous country capable of providing high-quality life to its citizens,” promises a joint planning document. While energy and transportation projects are critical for this transition, spending on other important areas, such as manufacturing and ICT projects, has lagged. 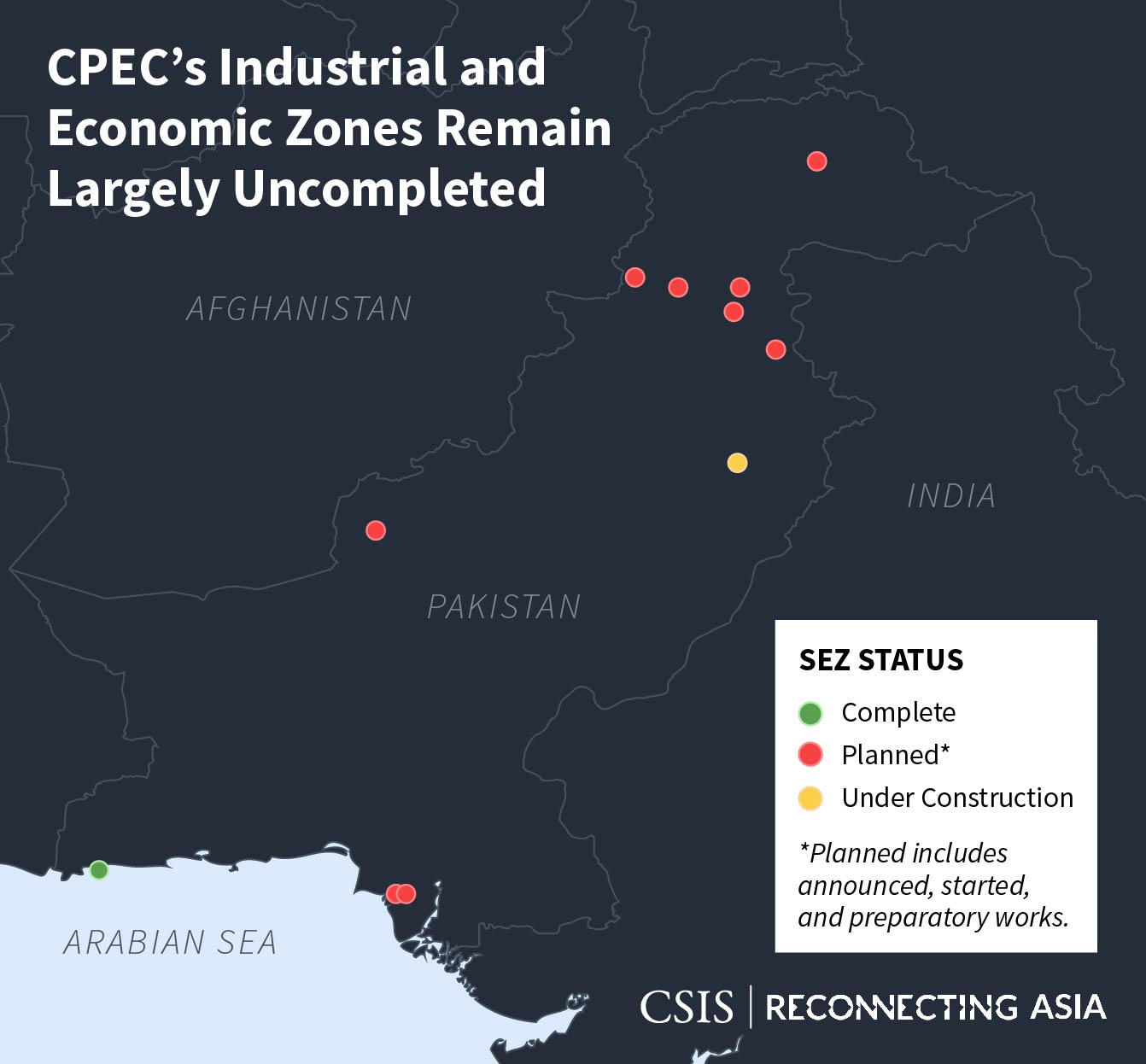 These areas are expected to receive more attention in the years ahead. The second phase of CPEC, which began in late 2019, promises to stimulate economic growth, with a focus on industrialization, agriculture, and socio- economic development. Facing a harsher economic environment, however, China and Pakistan may be forced to make additional tradeoffs between completing energy and transportation projects that were started during the first phase and focusing on these areas. Canceling more big-ticket projects could be financially wise but politically challenging given the CPEC’s symbolic importance to Xi’s signature foreign policy vision. But if Pakistan does not carefully steer the Belt and Road’s flagship during the next five years, it could find itself scrambling for the lifeboats.

This brief is based on data collected by the CSIS Reconnecting Asia Project using publicly available information from Pakistan’s government CPEC portal and annual budgets, the website of the Chinese embassy in Pakistan, the U.S. Institute of Peace, the Asian Development Bank, the World Bank, and relevant local, national, and international news articles published through January 2020. Additional information about the methodology and the full dataset is available here.