China’s Poor Purchasing Performance: How Should the United States Respond?

The U.S.-China Phase One deal’s most ambitious component, China’s commitment to increase purchases of U.S. goods and services by over $200 billion by the end of 2021, was also its riskiest. The targets were never realistic; they were just gaudy numbers meant to impress. The pandemic made the unrealistic the impossible.

Proof arrived earlier this week when the U.S. Commerce Department issued U.S. goods trade data for the first quarter of 2020. We do not yet have a full picture because the services data will not be available for several months and because China has yet to publish its own detailed line-by-line trade figures for its trading partners. As we documented in a recent CSIS Brief, the purchase targets are an amalgam of U.S. and Chinese data. Despite those limitations, the picture that we have so far suggests that what started as fantasy has become a nightmare.

U.S. exports of goods to China in the first quarter of 2020 were down 10 percent from the same period in 2019. By contrast, the deal forecasted a rise in goods exports of 36.6 percent this year.

In absolute terms, the biggest gap was in manufacturing, where for the first quarter alone the shortfall was over $19 billion. This reflects depressed sales across a wide range of industries, with exceptional shortfalls in commercial aircraft (essentially at zero) and automobiles (down 47 percent). Perhaps the biggest disappointment was in energy, where exports to China fell 33.3 percent when they were slated to grow 160 percent. This reversal is largely due to the collapse in energy demand, and with it, the cratering of prices. (That said, China’s energy imports from the Middle East jumped in Q1.) Even agriculture, which saw some high-profile purchases, underperformed, growing only 3.2 percent as compared to the expected expansion of 52.1 percent. Soybean exports were down almost 40 percent compared to 2019. Chinese demand for imported pork is sky-high since their own pig population was decimated by swine flu, but the United States has not been able to fully take advantage of this opportunity because Covid-19 has led to the halting of production in so many meat processing plants around the United States. 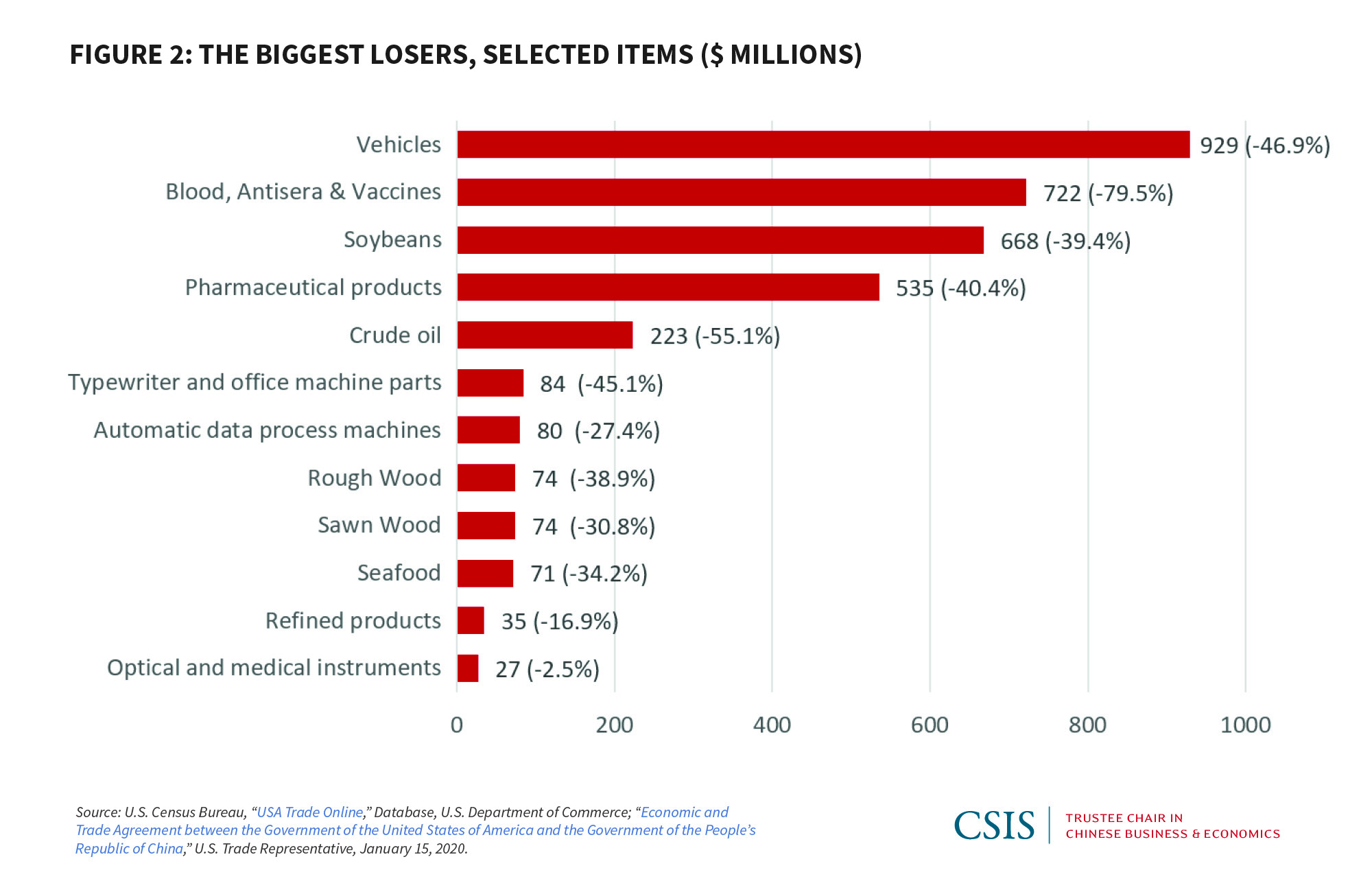 When the services data is eventually reported, it is likely to show a huge falloff due to the collapse of Chinese travel and tourism and the early closing of U.S. universities. Lower manufacturing activity also likely means fewer royalty and license payments to U.S. innovators. 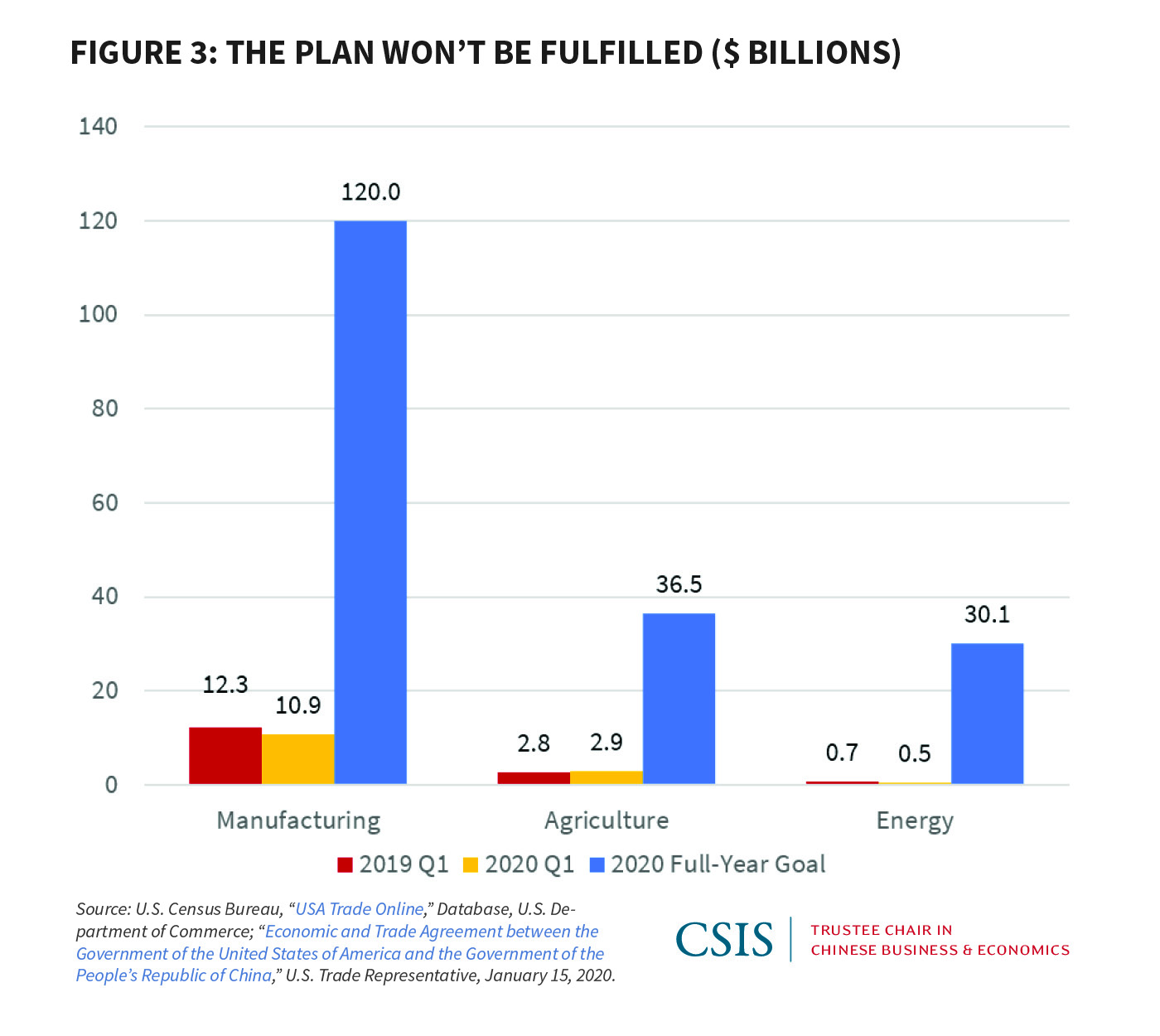 Projected over the entire year, U.S. goods exports to China might only be $60.0 billion, not the projected $186.6 billion, meaning a shortfall of $129.6 billion. Admittedly, this is a worst-case scenario, because Chinese imports are likely to rise as the economy recovers. And integrating in the Chinese data, which will count U.S. goods that were transshipped through Hong Kong as imports, will also help. But those amendments will not change the overall picture, just the details.

Options for the Trump Administration

Given this poor performance, what should the Trump administration do? Realistically, it has three choices. The first option is to use the agreement’s “bilateral evaluation and dispute resolution” mechanism by submitting an “appeal” to the Chinese and going through the multistage process to reach some sort of resolution, such as renegotiated targets, and failing that, to move forward with some sort of “remedial measure,” such as tariffs. The second option would be to forgo those consultations and quickly enact penalties and possibly withdraw from the deal entirely. The third option would be to not submit any sort of complaint, recognizing that China’s ability to import has been hampered by the pandemic, that its imports will rise over the remainder of the year, and that it has made incremental progress on every other element of the agreement.

There are pluses and minuses to each of these options. Following the first path would give life to the novel dispute resolution system invented by this deal and socialize China into this new world of bilateral, rules-based enforcement. But China could balk at these complaints by citing the unprecedented obstacles created by the pandemic and then either drag out the process or possibly quit the deal themselves. (Either party is permitted to withdraw by providing 60 days’ written notice.)

The second alternative would be faster, keep the United States on the offensive, and buttress Trump’s claim to be uniquely tough on China. But the downsides of rapid penalties or withdrawal are substantial. It would suggest that the strategy of unilateral pressure failed to change Chinese behavior, and new penalties would lead to Chinese retaliation at a time when the U.S. economy, including farmers, are facing unprecedented challenges. It would also likely mean the scuppering of potential Phase Two talks on Chinese structural reforms and perhaps any other negotiations. It would also hurt America’s credibility in terms of keeping to its word just as the Trump administration is trying to negotiate bilateral deals with Japan, the European Union, the United Kingdom, and others.

The third option, giving China a pass for now, would keep the deal together and be the most likely way to revive U.S. exports this year, have China make further progress on other parts of the agreement, and set the stage for future negotiations on constraining subsidies and other elements of China, Inc. It would also be consistent with the administration’s overall strategy to portray their trade policy as being more successful than their predecessors. However, a strategy of magnanimity has weaknesses. The United States may give China an inch, but China could take a mile, continuing to limit their imports and slow-walking other commitments. This tactic is also the most politically risky approach, as the administration will open itself up to attack from trade hawks on Capitol Hill and the president’s rival for the White House in the November election.

The Best but Least Likely Alternative

There is a fourth option, but it is not one the administration will choose: Admit that the purchases component of the deal was a mistake to begin with and reconsider their entire approach to China. The specific quantitative metrics were not just unrealistic, they violated America’s traditional commitment to free trade and undercut a multilateral trading system that has served the United States exceptionally well over the past seven decades.

A more effective way to expand U.S. exports and its broader economic interests vis-à-vis China would be a two-step approach. The first would be to renew America’s commitment to multilateralism by fixing the weaknesses in the current architecture and creating systems to address new challenges—in digital trade, advanced dual-use technologies, investment, and competition policy—for which the world currently lacks even the most basic institutions to govern. And the second would be to then use that foundation as negotiating leverage to push Beijing to marketize China’s economy domestically and further open externally. That does not mean giving up bilateral negotiations and even some kinds of unilateral action in certain circumstances. Instead, it means tilting the overall playing field in America’s favor, which would translate into a greater opportunity to advance U.S. interests on the full range of economic issues it faces with China, including promoting U.S. exports. The data now show that the current experiment is not up to the challenge.

Scott Kennedy is senior adviser and Trustee Chair in Chinese Business and Economics at the Center for Strategic and International Studies.

U.S. Business Leaders Not Ready for the Next U.S.-China Crisis
By Michael J. Green, Scott Kennedy
May 16, 2022
In the News