Counterterrorism Measures: Pretext for Closing the Space for Civil Society

Last week, the White House released its FY 2018 budget blueprint, adding $54 billion in defense and national security spending, while proposing massive cuts to foreign assistance and multilateral funding. This budget—justified as necessary to keep America safe—will do the exact opposite. It repeats the same mistake made by many Republican and Democratic administrations: a failure to understand that security and prosperity in the United States depend on the vitality of democratic institutions, including civil society, around the world. Instead, the budget reflects a deeply held and largely debunked notion that security and human rights are in competition.

For decades, despotic governments have sought to limit freedoms of expression, association, and assembly—among other rights—in a bid to maintain power. Following the color revolutions in Eurasia and the Arab Spring in the Middle East and North Africa, in which mass mobilizations of citizens toppled firmly entrenched leaders, governments intensified their crackdowns on civil society. Using various approaches—ranging from controlling the media, conducting smear campaigns, and passing restrictive legislation to depriving human rights activists of their nationality, detaining civil society leaders, and in some cases, engaging in targeted killing—authoritarian and semi-authoritarian governments, as well as fragile and emerging democracies, have attempted to silence independent voices. The fear of foreign interference and citizens’ demands for democratic reform have led governments to put constraints on the work of civil society organizations and their interaction with international organizations, foundations, and donors. In places such as Ethiopia and Russia, these restrictions on foreign funding have decimated the human rights sector, creating a vacuum filled by government-affiliated organizations.

The emphasis on counterterrorism since the attacks of September 11, 2001, accelerated this trend, giving governments a convenient justification and sweeping new authorities for closing the space around civil society. In response to UN Security Council Resolution 1373 (2001) and the UN General Assembly’s Global Counter-Terrorism Strategy, governments enacted a raft of laws to protect all individuals in their territories from terrorism. Despite the fact that countries were reminded of their obligations to align human rights and counterterrorism efforts, these measures often fell short of human rights standards. Governments with a deficit in human rights harnessed legitimate concerns about terrorism and their wide latitude on national security issues as an excuse to target domestic actors they consider opponents, including civil society. The UN special rapporteur on the promotion and protection of human rights and fundamental freedoms while countering terrorism drew the same conclusion, noting that “these requirements have in fact been misused by states that wish to curtail the existence of civil society for political reasons.”

The lack of a shared definition of terrorism at the global level has led countries to use deliberately vague and broad constructs that are vulnerable to abuse. For example, China’s counterterrorism law, passed at the end of 2015, is written so generally that it encompasses “any advocacy or activity” that aims to “create social panic, undermine public safety, infringe on personal and property rights, or coerce a state organ or an international organization, in order to achieve political, ideological, or other objectives.” Counterterrorism laws, as a result, have been used to stifle dissent and silence opposition voices, views, and opinions in the name of fulfilling countries’ international obligations to combat terrorism—and done so under the guise of the rule of law. The government of Egypt recently used its terrorist entities law to designate, without due process, 1,500 citizens as terrorists for their alleged links to the Muslim Brotherhood. Meanwhile, in Turkey and Uganda, journalists were prosecuted on charges of terrorism for exercising their right to freedom of expression.

Misuse of measures on countering the financing of terrorism further contribute to closing space for civil society. The Financial Action Task Force (FATF) was established in 1989 to prevent money laundering. After September 11, 2001, FATF’s mandate was expanded to include combating terrorist financing in an attempt to respond to new challenges. As part of this effort, FATF adopted Recommendation 8, which requires states to review the adequacy of laws and regulations that relate to the nonprofit sector and take concrete steps to prevent abuse by terrorists. Despite its recognition of the centrality of the work of civil society, FATF singled out nonprofit organizations as “particularly vulnerable” to abuse for terrorism financing. This language was amended in 2016 after effective engagement by a coalition of civil society groups, but much of the damage was already done.

Although FATF calls for a targeted, risk-based approach to regulating nonprofit organizations, many states introduced restrictions across the entire sector, particularly regarding foreign financial support. Algeria, Bangladesh, Russia, Tunisia, and Venezuela, for example, issued regulations that mandate additional scrutiny of financial institutions’ transactions and cap foreign funding for organizations engaged in human rights and advocacy efforts. Even the United States has fallen into this trap. While its restrictions are not as severe as those in authoritarian countries, the focus on countering terrorist financing has negatively affected U.S.-based organizations, especially in the areas of peacebuilding and humanitarian response. Regardless of whether governments did this out of a genuine desire to achieve FATF compliance or intentionally to suppress civil society, these measures have had severe consequences. For one, increased oversight and the risks of noncompliance have made some financial institutions reluctant to provide services to what can be considered high-risk clients: civil society actors. Consequently, two- thirds of all U.S.-based nonprofits with overseas operations have faced challenges in accessing financial services. Likewise, given their dependence on foreign aid, many civil society organizations are no longer able to sustain their work and respond to the needs of their constituencies.

The closing of space for civil society is clearly due to various and intersecting factors. Heavy reliance on foreign support, the lack of connection with local populations and constituencies, and “business as usual” advocacy approaches undermine the resilience and sustainability of civil society. Moreover, governments’ heightened fears about civic opposition to their rule have contributed to a restrictive environment for civil society. Governments have opted to weaken civil society, systematically ignoring that “an empowered civil society is one of the best defenses against violent extremism, serving as a powerful bulwark against the pernicious influences and narratives of extremist groups.”

Against this backdrop, the overwhelming focus on counterterrorism has exacerbated the closing of civil society space in countries all over the world and, in turn, muted international criticism of these measures. For decades, policies on human rights protection, civil society support, and countering terrorism have developed in silos, leading to tensions and outright contradictions in words and deeds. On one hand, there is immense pressure on governments to do everything they can to combat terrorism; otherwise, financial and military support could be withheld and innocent lives could be lost. On the other, governments are quietly reminded of their obligations to protect human rights and civil society space. The result is that governments adopt “narratives according to which human rights and democratic freedoms have to be traded off against security and stability.”

With these challenges in mind, it is time for the international community to define “terrorism” and determine the basis of its designation in a systematic way to limit abuses. A comprehensive and multidimensional definition, coupled with accountability mechanisms that would be triggered when counterterrorism imperatives are abused, would lead to an environment in which civil society has the space and independence to operate. Furthermore, the United States needs to create policy processes whereby tensions between counterterrorism objectives and human rights can be worked through in a way that best advances U.S. interests. The lack of dialogue between these two camps has resulted in setbacks for civil society and missed opportunities to build on the mutually reinforcing nature of security and human rights. It is in the interest of the United States to support the development in partner countries of democratic institutions that can uphold the rule of law, manage political and societal disputes, and protect civilians from harm. It is necessary to reengage in the discussion on how to strike the right balance between countering terrorism and protecting human rights. The budget is a good place to start.

© 2017 by the Center for Strategic and International Studies. All rights reserved.
Photo credit: KARIM SAHIB/AFP/Getty Images
Written By 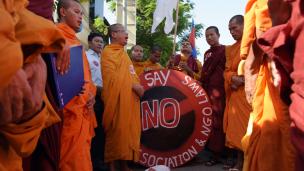 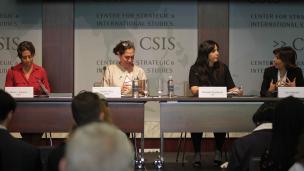 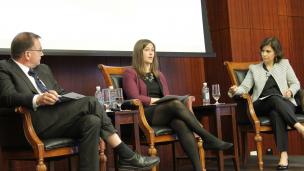 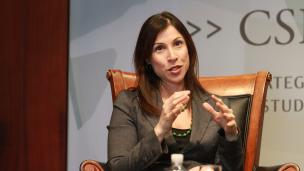 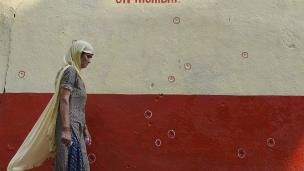