The Comprehensive and Progressive Agreement for Trans-Pacific Partnership (CPTPP) among 11 countries—Australia, Brunei, Canada, Chile, Japan, Malaysia, Mexico, New Zealand, Peru, Singapore, and Vietnam—broke new ground addressing digital trade issues via a comprehensive e-commerce chapter. What is the value of that chapter in terms of trade and digital trade?

Little is known to date about the impact of the CPTPP in general, and its e-commerce chapter in particular, on trade, investment, and e-commerce in the CPTPP region. This, of course, is not surprising—the agreement is not even three years old. However, learning about the CPTPP’s value added, and especially the value added of its e-commerce provisions, is hugely relevant, both for CPTPP members and the many countries that have inked trade deals with comprehensive digital trade chapters in recent years, such as the United States with Mexico and Canada, Singapore with Australia, and Chile with Uruguay and Brazil, respectively.

The value added of digital trade commitments on trade is also relevant for governments working on e-commerce negotiations in Geneva among the leading World Trade Organization (WTO) members and among the many countries and regional groupings, such as the members of the African Continental Free Trade Area (AfCFTA), that are pursuing agreements related to e-commerce. Moreover, e-commerce is booming globally; rules around it will shape the extent to which e-commerce sellers, many of them micro and small firms, can internationalize and, in turn, hasten their recovery from Covid-19.

One way to learn about the CPTPP’s impacts is through firm-level surveys that were displayed earlier in this series. These suggested that the CPTPP is valuable for the CPTPP region’s firms as a means to open new market access in goods and services and in terms of setting the ground rules for e-commerce. Firms especially value the agreement’s commitments to consumer protection, free cross-border data flows, and ban on server localization.

Another way to explore the CPTPP’s impact is to assess the trade effects of preferential trade agreements (PTAs) such as the CPTPP that have comprehensive e-commerce chapters. This article takes a look at existing literature on the impact of trade agreements on trade, and especially digital trade, and performs a preliminary assessment of impacts on trade from CPTPP-style PTA’s trade effects.

As the World Trade Organization’s (WTO) Doha Round stagnated in the 2000s, PTAs emerged as a means for countries to integrate with each other and incubate new trade and trade-related rules in areas such as services trade, investment regulations, trade facilitation, and intellectual property rights. In recent years, a growing number of governments have also used PTAs to forge agreements that have a dedicated chapter for e-commerce, such as the CPTPP, or “digital trade,” as in United States-Mexico-Canada Agreement (USMCA). Such agreements include sophisticated provisions to protect consumers, enable cross-border data flows, ban server localization, protect member-country firms’ source code, and so on. These comprehensive digital trade chapters have started to be increasingly common in PTAs formed in 2020 and 2021, often among CPTPP members, such as the 2020 Australia-Peru FTA and 2020 USMCA (Figure 1). 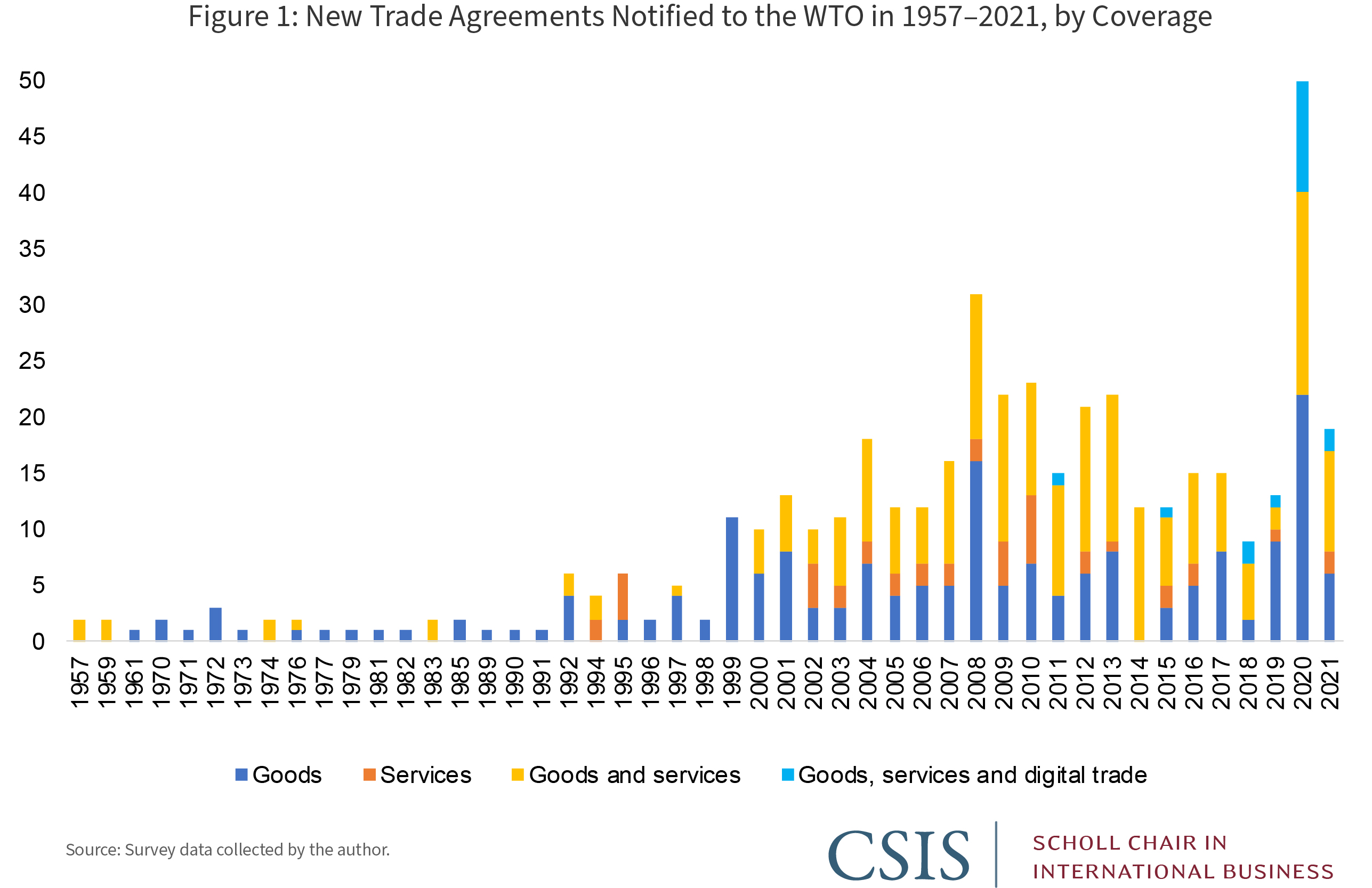 Granted, many PTAs struck even in the heyday of PTA formation in the 2000s contain some e-commerce-related rules. For example, a great many PTAs have adopted the WTO’s moratorium on customs duties on electronic transmissions, and many also promote to paperless trade. In a 2017 mapping, 75 PTAs, or over a quarter of all PTAs notified to the WTO at the time, had some specific provisions on e-commerce. In addition, PTA provisions on issues such as intellectual property protection, services liberalization, technical barriers to trade, and paperless trade commitments also facilitate trade and e-commerce. Many PTAs also promote alignment between domestic regulations with international model laws on e-commerce. However, it is only in the past few years that countries have adopted e-commerce chapters with the kind of comprehensive scope used in the CPTPP.

There is a voluminous body of academic literature on the impacts of trade agreements on trade flows among members and non-members.1 In the main, this literature shows that liberalizing and well-implemented PTAs promote trade among members. Agreements whose members adhere to the principle of open regionalism and lower, or at least do not raise, trade barriers to third parties also tend to promote trade with third parties, due to increased import demand from the members. PTAs have also been found to impart benefits that go well beyond traditional analyses on gains from trade, such as propelling export-oriented, efficiency-seeking investment flows among members; encouraging cooperation among members on customs and infrastructure integration; and helping relax members’ political economy constraints to multilateral trade talks.

In the digital era, another question has emerged: how does expanding internet penetration rates in a country affect its trade flows? This is a sensible question: individuals in advanced countries can much more easily use the internet to find sellers in foreign countries, pay them, and orchestrate shipments at the press of a button. Digitization also streamlines the numerous paper-based processes businesses need to carry out and to manage trade logistics and trade compliance, reducing trade costs and facilitating trade. Of course, the internet also enables trade in digital services among countries and cross-border transmission of data that enables efficiencies in services and manufacturing.

There is a long-standing literature on the positive impacts of the internet and broadband use on trade in goods and services and, more recently, export diversification.2 Business survey data for this study shows that these patterns are very much at play at the firm level: companies in the CPTPP region that are most digitized and aware of trade agreements also tend to export and export to multiple markets (Figure 2). 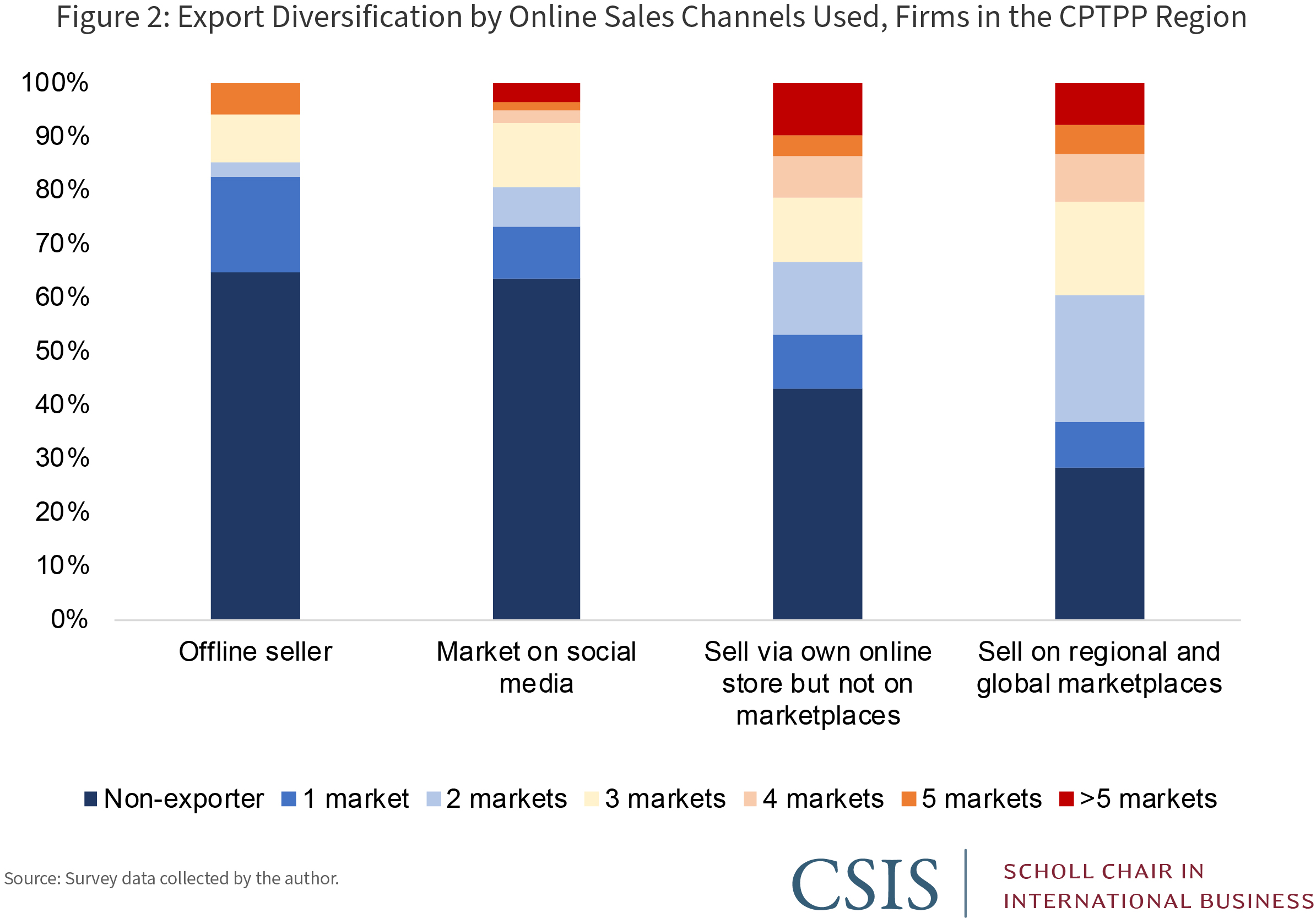 In short, there is substantial evidence, much more than can be summarized here, that PTAs and connectivity promote trade among nations. There is also some evidence that PTAs promote cross-border e-commerce in services (or trade in digitally deliverable services).

Impacts of “Super PTAs” on Trade

Do PTAs with robust e-commerce chapters promote trade and digital trade? This question is still quite unexplored given that CPTPP-style “Super-PTAs”—binding, highly comprehensive agreements that cover trade in goods and services, digital trade rules, data flows, and investor protections—are few in number and recent. Here, this question is explored very preliminarily through a gravity data set that catalogues bilateral trade among countries for goods between 1970 and 2020 and for services between 2005 and 2019, disaggregating PTAs into four types that cover trade in goods; trade in services; trade in goods and services; and trade in goods, services, and digital trade respectively. The results in Table 1 in the appendix can be summarized as follows:

In sum, this preliminary look suggests that PTAs with robust e-commerce chapters, along with chapters in goods and services, help promote trade in goods, services, and digital services among the member countries. This statement needs to be taken with a grain of salt. The number of comprehensive agreements is small, and time series to analyze them are very short; for now, this analysis also cannot state that the most comprehensive CPTPP-like agreements are associated with increased trade because they have provisions on digital trade or whether they might have produced the same impact without the e-commerce chapter. The unique contributions of the different PTA chapters to trade and economic outcomes are beyond this brief look and, in general, are challenging to establish. The World Bank’s initiative on deep trade agreements addresses the great many provisions in PTAs and seeks to assess their impacts.

There is a great deal of work ahead to assess the value added of trade agreements with robust e-commerce chapters. For example:

Kati Suominen is an adjunct fellow (non-resident) with the Europe, Russia, and Eurasia Program at the Center for Strategic and International Studies in Washington, D.C.

This report was made possible by support from Google.

The classic way to assess the impacts of trade agreements on trade among pairs of countries is the gravity model, whereby bilateral trade among two parties is a function of their GDPs (positive impact on the volume of bilateral trade), distance (a negative), and a number of other variables such as common language, common border, and a trade agreement (all of which are expected to promote trade).

This paper uses the U.S. International Trade Commission’s dynamic gravity database for 1970 to 2020 for gravity variables. Data on trade in goods are from United Nations Comtrade, and trade in commercial services is from the WTO. As a subset of commercial services, digitally deliverable services include insurance and pension services; financial services; telecommunications, computer, and information services; other business services; and charges for the use of intellectual property. The broadband variable is a log of combined broadband penetration rates.

Regressions include country and year fixed effects in Table 1, and, to account for multilateral resistance, country-year fixed effects in Table 2. There are familiar methodological challenges with regressions covering services given that many country pairs do not either have such flows or simply that neither party reports such flows. Poisson pseudo maximum likelihood (PPML) regressions used here seek to address this problem and are in general emerging as a useful method for gravity models. 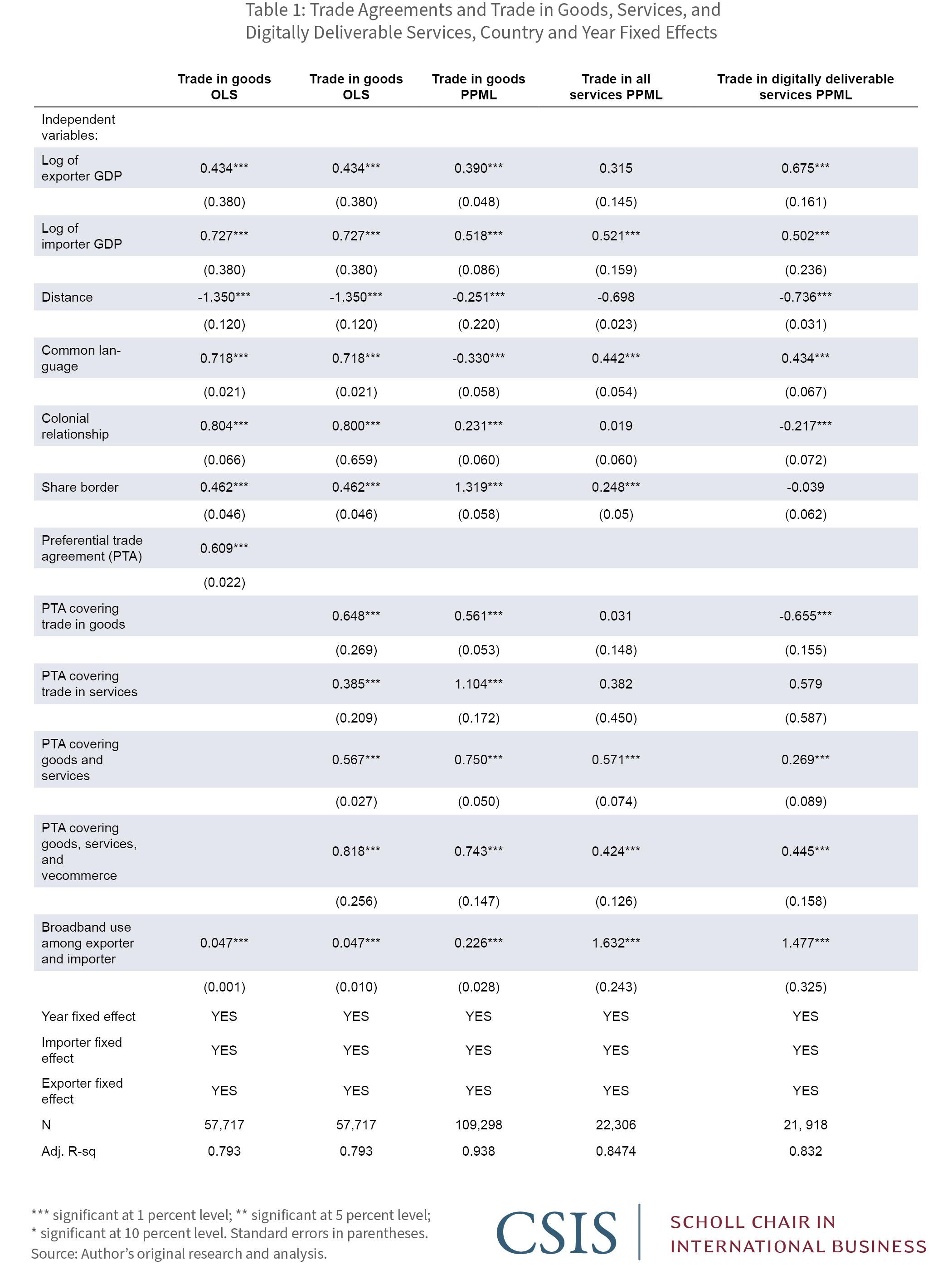 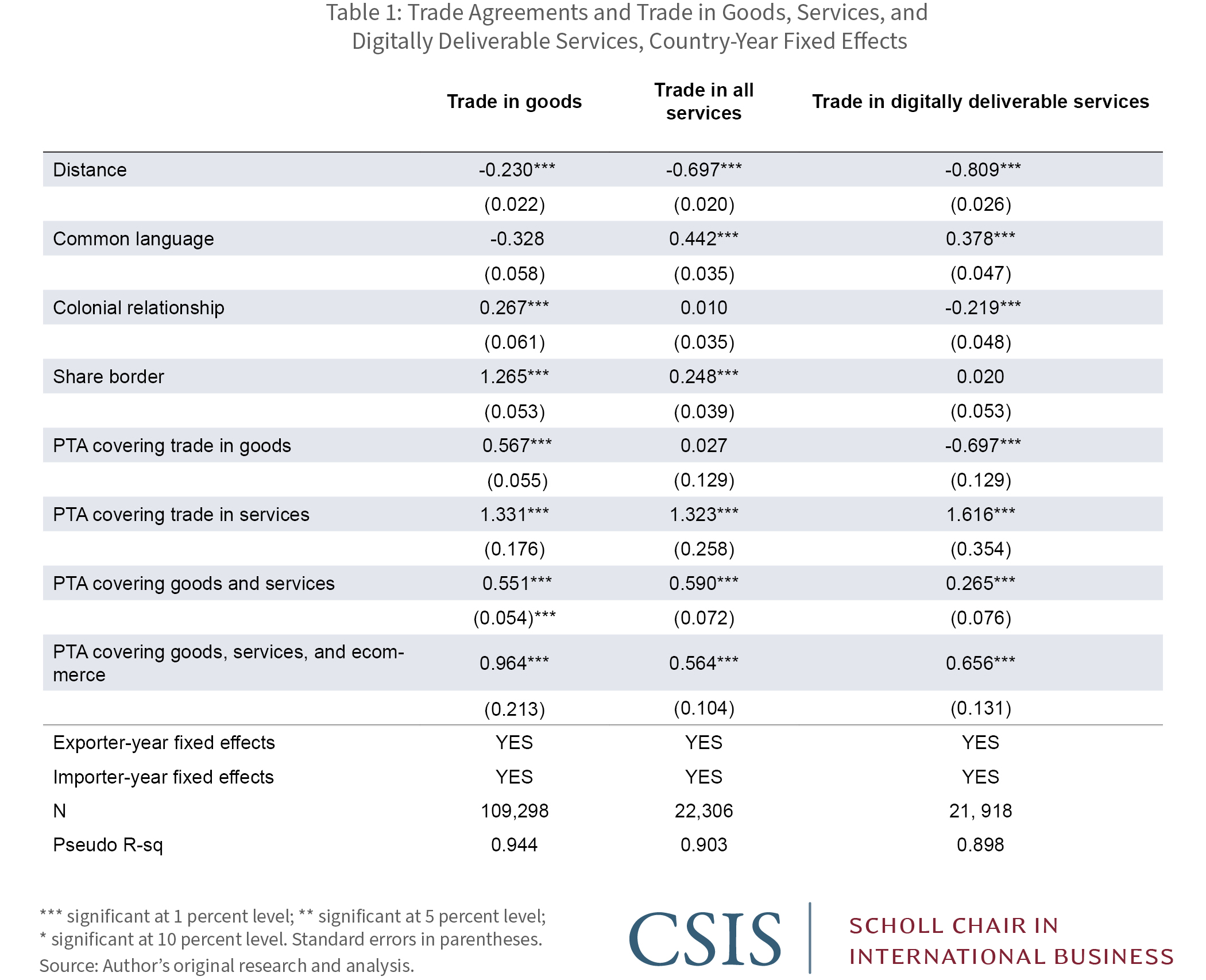