In March, Congress passed the Coronavirus Aid, Relief, and Economic Security (CARES) Act, a historic $2 trillion disaster relief bill mislabeled as a stimulus package. Along with the speaker of the House, former presidential candidates, and billionaire investors, President Trump is now calling for “Phase 4” of coronavirus response measures: a “BIG & BOLD” infrastructure package.

While it now appears as if a “CARES 2” bill is the immediate priority for legislators, at some point, Congress will have to turn from relief to stimulus and infrastructure should be at the heart of such a plan. The phrase “infrastructure package” is something of a Rorschach test in Washington D.C., appealing to different interests for different reasons, and this time will be no exception. Yet whatever political squabbling takes place in the next few weeks should not distract us from three facts: (1) America can afford to spend big on infrastructure; (2) after this crisis will be the perfect time to do so; and (3) climate change is rapidly increasing the need for new infrastructure projects. Congress and the White House should start with existing plans, work out what is possible in the short and medium term, and ensure that an infrastructure plan is “shovel ready” in time to restart the American economy when the worst of this crisis has passed.

The “once great infrastructure of our Country” was “great” because it planned for the economy of the future, not the technologies of the past. Today, this means more than just “rebuilding”, but investing in projects that help mitigate climate change and adapt to its impacts. In particular, investing in public transit and electric vehicle charging networks, clean energy infrastructure, clean water systems, energy-efficient communities, and green spaces.

Despite his election promise to build a trillion dollars’ worth of new infrastructure, the Trump administration has few projects to its name. The phrase “infrastructure week” has become something of a running joke on Capitol Hill, with Trump and the Democrats both enthusiastic about infrastructure, yet regularly unable to reach a deal. However, the state of America’s infrastructure is no joke. According to the American Society of Civil Engineers, the United States needs to spend $1.5 trillion by 2025 just to fix its existing stock of roads, bridges, dams, and other infrastructure. These estimated costs expand to $5 trillion by 2040. Total public construction spending as a share of economic activity has been in free-fall since the Great Recession of 2008-2009 and is at its lowest level since the Census Bureau began collecting data (see Figure 1). 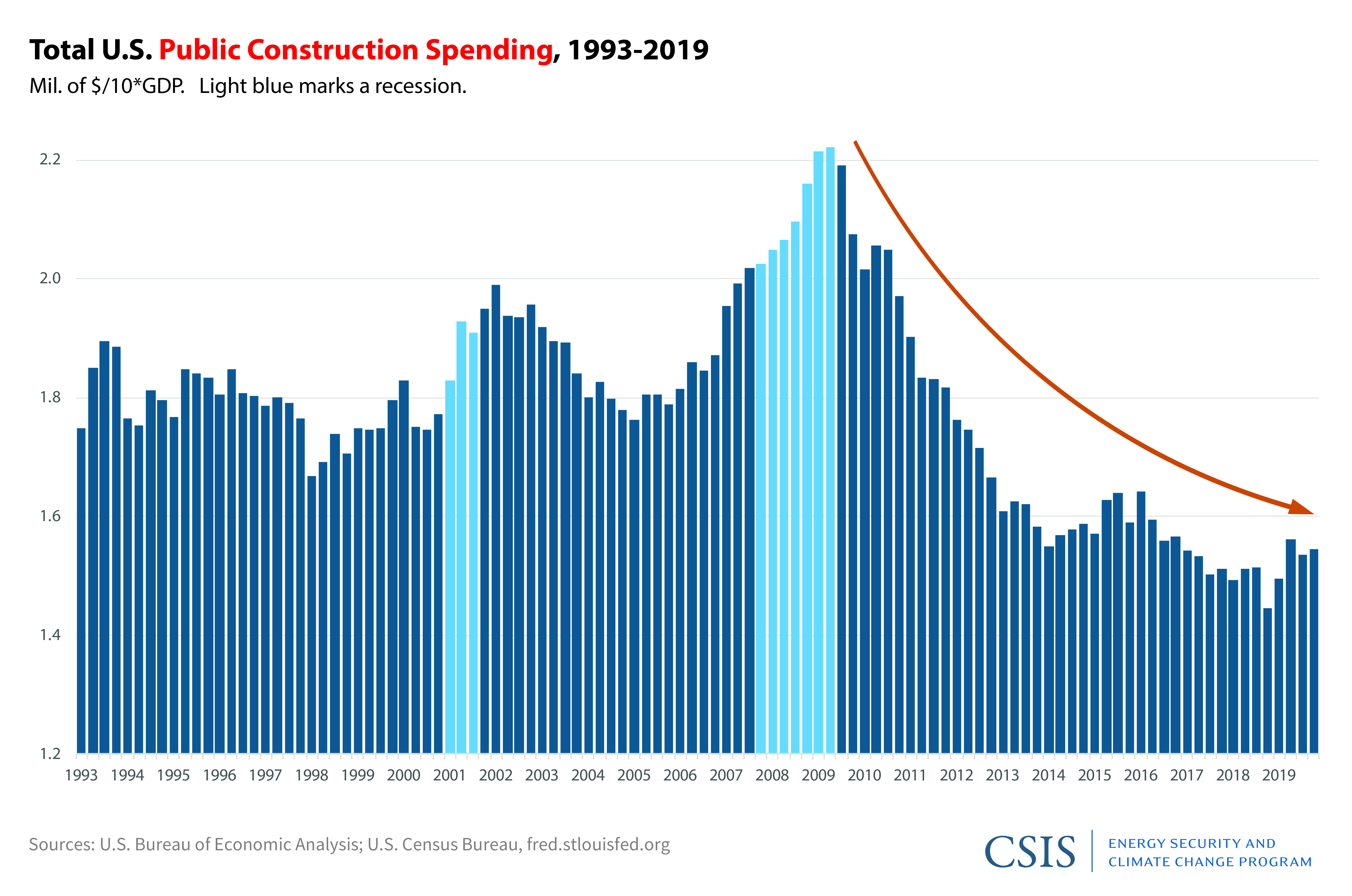 Just over a month ago, reports circulated that the White House and Democrats were negotiating a bipartisan infrastructure deal. These talks came to nothing, with neither side able to agree on how such a package would be financed. At the time, Republicans were unwilling to either grow the deficit or reverse corporate tax cuts, and Democrats refused to cut other spending. With the coronavirus crisis threatening a “Greater Depression,” financing is now unlikely to be the biggest hurdle, nor should it be.

The United States Can Easily Afford a Large Infrastructure Package

Trump is right to say there has never been a better time for the federal government to borrow money. The yield on 10-year Treasury bonds is at an all-time low of just 0.62 percent (as of April 3, see Figure 2), implying that bond markets are not only pricing in a COVID-19 global recession but expect the American economy to be in a “liquidity trap” more often than not over the foreseeable future. In other words, monetary policy—the setting of interest rates by the Fed—will have a harder time stimulating economic activity, leaving the hard work up to fiscal policies such as infrastructure spending. 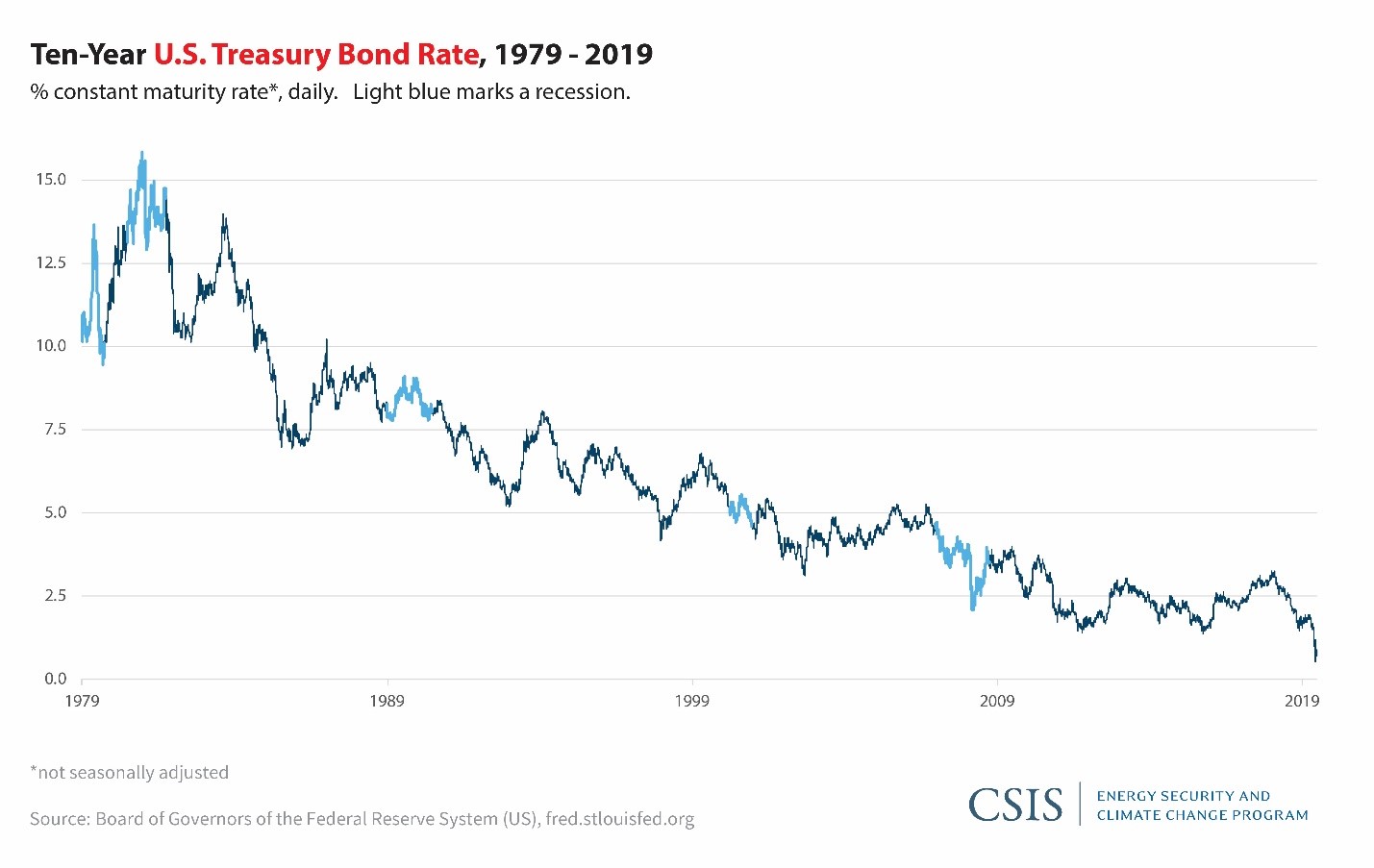 Not only is the burden on fiscal coffers lower in this environment, but if the economy’s nominal growth rate remains above the average nominal interest rate, then that debt is sustainable. That is, the federal government should feel comfortable increasing its debt stock so long as it invests in the productive capacity of the economy. While such productive investments are by no means guaranteed, there is such a desperate need for modern, green infrastructure in this country such that identifying productive projects should not be a constraint. While some fear a sovereign-debt crisis, that risk is mitigated by the unique status of the United States as a safe haven and the status of the U.S. dollar as a global reserve currency. Paul Krugman, for example, has argued that the U.S. federal government could feasibly double its debt-to-GDP ratio and still not risk a debt crisis.

An Infrastructure Package Is an Effective Stimulus Package

Then there is the question of whether infrastructure spending is the right kind of economic stimulus for the Covid-19 crisis. There are some concerns that large-scale infrastructure projects involving hundreds of workers could exacerbate the health crisis. To be clear, now is the time to start planning for projects that will be built when the health crisis has passed. Infrastructure projects in the United States have a long lead time, and even in the present crisis, that is unlikely to change. There are multiple relief measures that still need to be enacted to address the immediate economic shock of the Covid-19 crisis. However, planning for an infrastructure-led stimulus package can and should happen at the same time.

With Goldman Sachs estimating that GDP could fall as much as 34 percent in the second quarter, and recent data out of China indicating life does not return immediately to normal after the peak of the epidemiological curve, it will be critical to have a stimulus package ready to go when the economy is given the green light to start up again.

Infrastructure spending helps raise economic output in two ways. In the short term, it provides a boost to aggregate demand through what is known as the “short-term fiscal multiplier.” That is, a dollar of fiscal spending will raise GDP by more than that dollar as it is spent and re-spent throughout the economy, particularly by those newly employed on these projects. The multiplier on infrastructure investment is likely lower than government consumption—such as the cash handouts included in the CARES Act—but infrastructure also increases the productive capacity of the economy by boosting potential growth through greater productivity in the future, as workers and capital are able to produce more output for less. Overall, the International Monetary Fund's (IMF) estimates that an unanticipated 1 percentage point of GDP increase in investment spending increases the level of output by about 0.4 percent in the same year, on average, and by 1.5 percent four years after.

These effects are averages, however, and could be much larger (or smaller) depending on three key factors. First, infrastructure spending is much more effective when economic growth is low, and monetary policy is accommodating. Assuming the Covid-19 pandemic continues to stall global and U.S. growth and that interest rates remain low, right now is, therefore, the perfect time to launch a large public investment package. Second, the IMF has shown that demand effects are stronger, and the debt-to-GDP ratio is more likely to decline if public investment is debt-financed rather than budget neutral. With debates over how to pay for infrastructure, such as increasing the gas tax, holding up previous attempts at an infrastructure package, it is politically convenient that debt-financing is the more effective economic policy at this moment.

Finally, the effects on output are more pronounced if executed through an efficient public investment regime. This is where the United States may be in trouble. Part of the reason federal spending on infrastructure has fallen is that the barriers to such spending have been increasing for decades. For example, China has managed to install 15,500 miles of high-speed rail lines and around 23,000 miles of ultra-high-voltage transmission lines, while the United States has been unable to build a mile of either. The forces of NIMBY-ism and “predatory delay” have significantly increased the costs and regulatory burdens on new projects. As a result, many projects remain in planning and approval purgatory indefinitely, such as California’s high-speed rail line, which received funding in the 2009 stimulus package and is still yet to begin construction.

A large new infrastructure initiative may, therefore, require not only opening the purse strings to action appropriate infrastructure spending but also implementing crisis regulation to modify or even override zoning laws, federal insurance policies, and public input processes. This is often how it has worked in the past, with some of the largest infrastructure packages—such as Roosevelt’s New Deal or Obama’s 2009 stimulus bill—expediting the funding and building of ambitious projects.

A Coronavirus Crisis Stimulus Should Plan for the Climate Crisis

But what kind of infrastructure spending? This is where legislators are likely to encounter the largest stumbling blocks. Despite the dip in pollution, Covid-19 does not mean the climate crisis suddenly goes away, yet many will argue now is not the time to think about other issues. Any large infrastructure package made in response to Covid-19 may crowd out any future attempts at such spending, making it vital that any plan includes “green infrastructure” now. Already there are concerns that negotiations over an infrastructure package could become overwhelmed by “climate politics,” a familiar sticking point from the $760 billion infrastructure bill Democrats put forward in January this year, which prominently featured climate-related spending.

It’s important to remember that the climate change issue, in many ways, is an infrastructure issue. Existing infrastructure globally has already locked in about half the emissions we can emit before 2100 and remain within the 1.5-degree target. Staying under 2 degrees will require huge investments in modern infrastructure that supports clean energy technology and reduces our overall energy use. Furthermore, the United States is going to have to upgrade much of its infrastructure stock to prepare for climate dangers already baked into the cake. Floods, fires, and hurricanes all put enormous pressures on infrastructure unprepared for what is to come.

A forward-looking infrastructure plan that puts the United States on the best footing for dealing with the next crisis would contain five key elements. These have been consistent themes across a range of plans, including the Democrats’ proposal from January, and Washington State Governor, Jay Inslee’s comprehensive climate plan during his short-lived candidacy for the Democratic presidential nomination. These five themes are:


Infrastructure projects should be “shovel ready” as soon as this crisis is over if they are to be of much help to the economy. However, negotiations on an infrastructure package are likely to be more protracted than those concerning immediate relief efforts, and green infrastructure is likely to be the least prepared of proposed initiatives. That is why they need to start now. We know the United States can take on the debt and that an infrastructure package could be the backbone of an economic recovery if it creates employment immediately and invests in projects that facilitate future growth and productivity. But perhaps most importantly, infrastructure could be the single most important policy swing the United States can take when preparing for the ongoing climate crisis.

Lachlan Carey is an associate fellow with the Energy Security and Climate Change Program at the Center for Strategic and International Studies in Washington, D.C.

Economics , and Energy and Sustainability