On July 15, the European Council imposed (modest) sanctions on Turkey in response to what it characterized as the latter’s “continued and new illegal drilling activities” in the Eastern Mediterranean. That decision followed a progressively escalating war of words on this issue between the European Union and Turkey that started in May, but that goes back years.

These tensions should be understood in a broader political and geopolitical context. Relations between Turkey and the United States are strained, chiefly due to Turkey receiving the Russian-made S-400 air defense system. So far, the United States has expelled Turkey from the F-35 program and might also sanction it under the Countering America’s Adversaries Through Sanctions Act (CAATSA). These heightened tensions follow a U.S. government effort to encourage a closer alliance between the Republic of Cyprus, Greece, and Israel, a policy supported by both the administration and bipartisan legislation—and seen in Turkey with suspicion.

At the same time, a regional initiative, the Eastern Mediterranean Gas Forum, was set up in early 2019 and included most countries in the region except Lebanon and Turkey, fueling Turkey’s fears that it is being cut off of exploitation of energy resources in the area. Efforts to solve the long-standing Cyprus dispute have meanwhile stalled. And Turkey’s president, Recep Tayyip Erdogan, is facing a weakened economy and is recovering from an electoral rebuke in the Istanbul mayoral elections—all good reasons for a leader to play the patriotism card.

How long this stand-off continues depends primarily on Turkey’s appetite for escalation, but longer-term tranquility will require addressing some fundamental disagreements that have proven intractable for decades. Even so, the conflict between Turkey and Cyprus has not been, so far, a big obstacle for gas development. That might change in the future.

Q1: Why did the European Council impose sanctions?

A1: The immediate trigger was that Turkish Petroleum (TPAO), a state-owned oil company, moved two drilling vessels into areas that the European Union recognizes as located within Cyprus’s exclusive economic zone (EEZ). This was the third naval incident to occur between Turkey and Cyprus since the first gas discovery was made in Cyprus in December 2011. The European Union responded to what it perceived as “a continuous escalation” by Turkey:

“[. . .] the Council decides to suspend negotiations on the Comprehensive Air Transport Agreement and agrees not to hold the Association Council and further meetings of the EU-Turkey high-level dialogues for the time being. The Council endorses the Commission’s proposal to reduce the pre-accession assistance to Turkey for 2020 and invites the European Investment Bank to review its lending activities in Turkey, notably with regard to sovereign-backed lending.”

The first naval confrontation came in October 2014, when the Turkish navy issued a Navigational Telex (NAVTEX) announcing that a seismic vessel, Barbaros, would explore in areas within Cyprus’s EEZ (which Turkey disputes—more on that below). The Barbaros was accompanied by a Turkish naval warship, while another warship was proximate to a vessel conducting exploration in an area licensed by the Republic of Cyprus. This action led to a condemnation by the European Council; it also led Cypriot president Nicos Anastasiades to briefly suspend his participation in talks about a settlement of the Cyprus dispute.

The second major incident came in February 2018 when Turkish naval forces interfered with the SAIPEM 12000, a drilling vessel chartered by the Italian company Eni. The protracted stand-off led Eni to abandon its drilling program and relocate the vessel to another country. This incident occurred in waters that are indisputably within Cyprus, but to which both the Republic of Cyprus and the Turkish Republic of Northern Cyprus (TRNC) have granted licenses for exploration (more on that below). It was Turkey’s defense of the right of the TRNC to license these areas that led to the confrontation.

Q2: What is the conflict about?

A2: Ostensibly, this conflict is about hydrocarbons—but only partly so. The Turkish Ministry of Foreign Affairs has explained its position thus: “our hydrocarbon activities in the Eastern Mediterranean have two dimensions: the protection of our rights on our continental shelf, and the protection of the equal rights of the Turkish Cypriots, who are co-owners of the Island, over the hydrocarbon resources of the Island.” This dual position is worth unpacking.

The first dimension is straightforward. Turkey believes that the law of the sea, and especially its provisions on the continental shelf and EEZ that islands can claim, as Cyprus does , leave it with a disadvantaged position in the Aegean Sea and the Eastern Mediterranean. Hence, Turkey is not a signatory to the United Nations Convention on the Law of the Sea (UNCLOS) and has sought a negotiated settlement with Greece (and, eventually after a settlement, Cyprus) on territorial waters. When the Turkish Ministry of Foreign Affairs says that it seeks “the protection of our rights on our continental shelf,” it means that Turkey and Cyprus have overlapping claims in the same area. One of the two vessels today (the Fatih) and the 2014 incident discussed above were located in areas that both Turkey and Cyprus claim (the former as part of its continental shelf and the latter as part of its EEZ).

The second conflict is more complicated and relates to the long-running Cypriot dispute. Since 1974, the island has been divided into a Greek Cypriot part, recognized by the international community with the exception of Turkey as the Republic of Cyprus, and a Turkish Cypriot part, recognized solely by Turkey (the TRNC). This reality produces a number of issues. Turkey disputes the right of the (Greek) Republic of Cyprus to sign international agreements to delimitate its maritime borders—like the ones it has with Egypt, Israel, and Lebanon; or to issue licenses for exploration and development. Turkey further believes that any revenue, even from licenses it does not formally recognize, should be shared with the TRNC and the people living in Northern Cyprus.

Turkey also believes that the TRNC has equal rights to issue licenses, including in areas that are offshore the southern part of Cyprus. Some naval disputes have emerged due to this last issue. After Turkey and the TRNC agreed to delimitate their border in 2011, the TRNC issued several exploration licenses to TPAO, including in areas that overlap with licenses issued by Cyprus. The incident in February 2018 involving Eni, and the second vessel deployed (the Yavuz), is focused on these areas (TPAO has also conduced seismic activities in these areas).

In short, there is one conflict about the proper maritime border between Turkey and Cyprus and by extension, other countries like Egypt and Greece. The second conflict is about who has the authority to license the areas that are, unquestionably, within the EEZ claimed by Cyprus, and how the revenue from any developments might be shared. This means, simply, that without a broader diplomatic initiative—a settlement on maritime borders in the Aegean, and a resolution to the Cyprus dispute—it is unlikely for Turkey to back down. Of course, Turkey can choose to escalate or not. But the underlying conflict will only go away following a resolution of disputes that have persisted for decades. 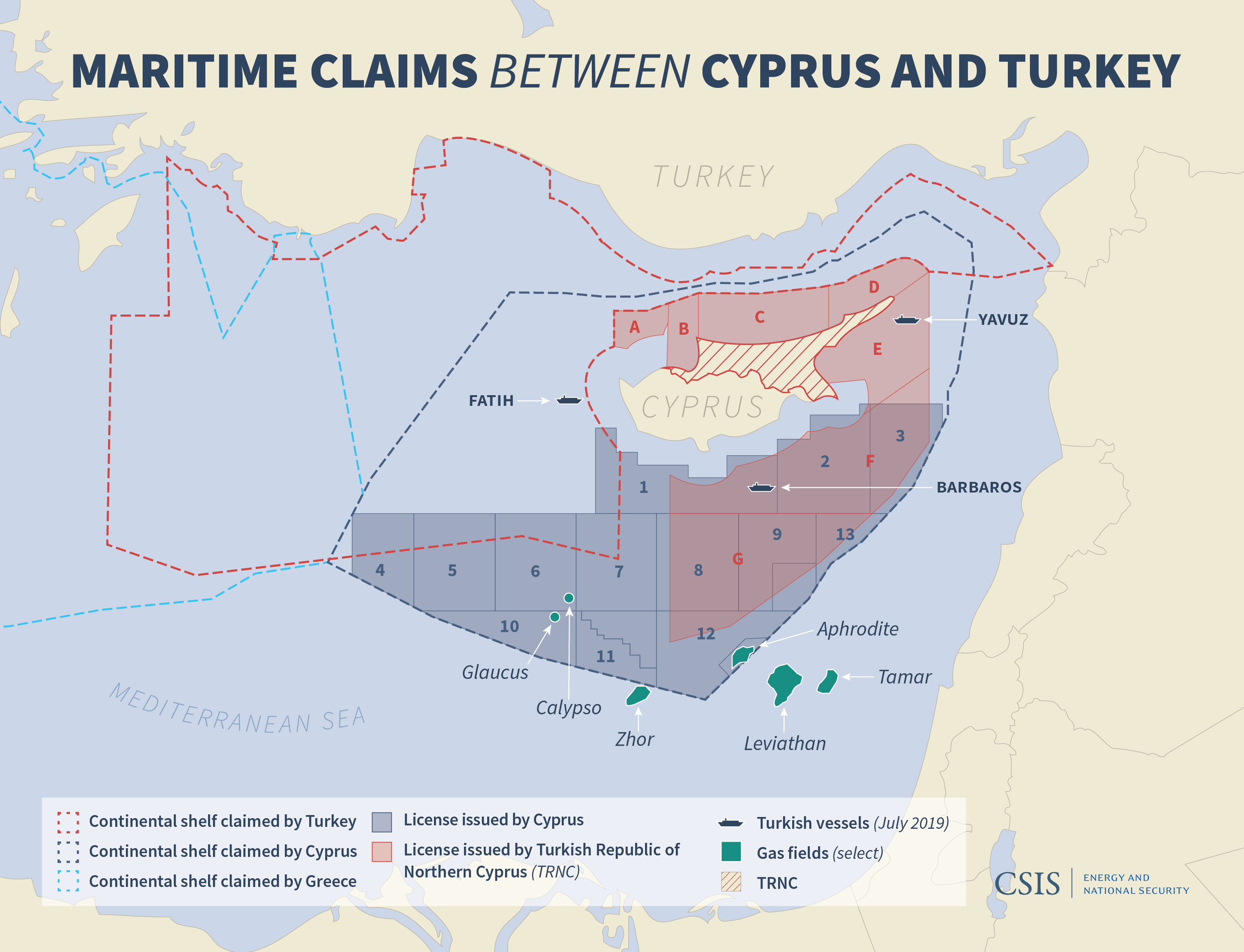 A3: The United States has a dual position as well, reflecting the two elements in the conflict. In terms of the territorial dispute between Turkey and Cyprus, the United States always refers to areas "claimed” by Cyprus—meaning that the United States does not take a position on whether these waters belong to Turkey or Cyprus; it only believes that Turkish surveying or drilling is “highly provocative and risks raising tensions in the region,” while urging “Turkish authorities to halt these operations and encourage all parties to act with restraint.”

On the question of sovereignty, the U.S. position supports the idea that “the island’s oil and gas resources, like all of its resources, should be equitably shared between both communities in the context of an overall settlement.” This is similar to the Greek Cypriot position; in principle, the Turkish Cypriot position concurs as well, except that the TRNC believes it should have a say in the agreements that govern revenue generation; and that there should be some process for guaranteeing revenues even in the absence of (or before) a final settlement.

A4: The three discoveries made so far off Cyprus—Aphrodite, Calypso, and Glaucus—are located outside areas that are disputed. (Aphrodite extends into Israeli waters, and how the two sides will share revenues is still being negotiated, but that’s a different, and far more amicable, dispute.) Turkish naval forces have mostly operated in areas that TPAO holds licenses to—granted either by Turkey or the TRNC. In one occasion, in 2018, those forces deterred Eni from drilling an exploration well, the most direct impact on exploratory activity in the region. But so far, there is no news about any hydrocarbons discovered in contested areas.

The Cyprus dispute, and Turkey’s forceful assertion of its rights and those of the Turkish Cypriots, has long been recognized as possible obstacles to gas exploitation—and it is certainly one of the (various) barriers that could inhibit the construction of an EU-backed pipeline to Greece (and, of course, Turkey). But the challenges holding back gas developments seem mostly commercial in nature—in fact, despite the apparent contest over how to spend the bonanza, it is quite likely that Cyprus might import gas before it exports it. The recent renewal of the proposal by the TRNC, welcomed by Turkey, for a revenue-sharing formula shows that despite the dispute, there is a recognition that this gas might be developed in ways that benefit the Turkish Cypriots as well, and that this is something that both Turkey and the TRNC would welcome. It is clear that an optimal development pathway would benefit from a resolution of the various issues; what is less clear is how much the failure to solve the political disputes will hamper exploitation of existing discoveries.