The Game Has Changed: Rethinking the U.S. Role in Supporting Elections in Sub-Saharan Africa

It is election season again in sub-Saharan Africa. Roughly every five years, the region faces a tidal wave of elections. In previous cycles, starting in the mid-1990s, the outcome was generally predictable. The ruling party leveraged its considerable advantages—including access to state resources—to secure another term. If the incumbent party rigged the poll, international monitors easily spotted the fraud and strenuously objected, even if to little effect. For the past two decades, five out of every six elections have produced the same result.

This next batch of some two dozen elections will be different. A combination of demographic, technological, and geostrategic developments is disrupting the region’s electoral landscape. African leaders, opposition, and publics are adapting and writing a new playbook in the process. From street protests and parallel vote counts to election hacking and internet shutdowns, sub-Saharan African politics are becoming more competitive and more unpredictable.

The case for democracy and improving the quality of elections is not simply a moral or altruistic one. U.S. national security objectives, including promoting prosperity and stability, are more achievable in democratic systems. Autocratic regimes, in contrast, worsen corruption, undercut sound economic management, and fail to produce long- term growth. Indeed, recent research indicates that Africa’s democracies grow at a faster rate than its autocracies, and this is more pronounced among countries that have been democracies for longer.1 Moreover, historically, democracies rarely have gone to war with one another. If the United States wants to advance its broad objectives in the region, it will need to reconceptualize its investments, partnerships, and interventions regarding elections.

A New Domestic and International Context

Sub-Saharan African governments will conduct at least 23 presidential or general elections during the next two years. The next wave of polls is likely to exhibit more volatility in part due to urbanization, underperforming economies, and majority youth populations. In addition, greater access to technology has upset the balance of power in many countries. For instance, young, urban dwellers are more likely to criticize the ruling party than rural counterparts and appear more adept at outmaneuvering government controls on information.2 These developments partly explain why there have been more than 25 peaceful handovers of power since 2015. 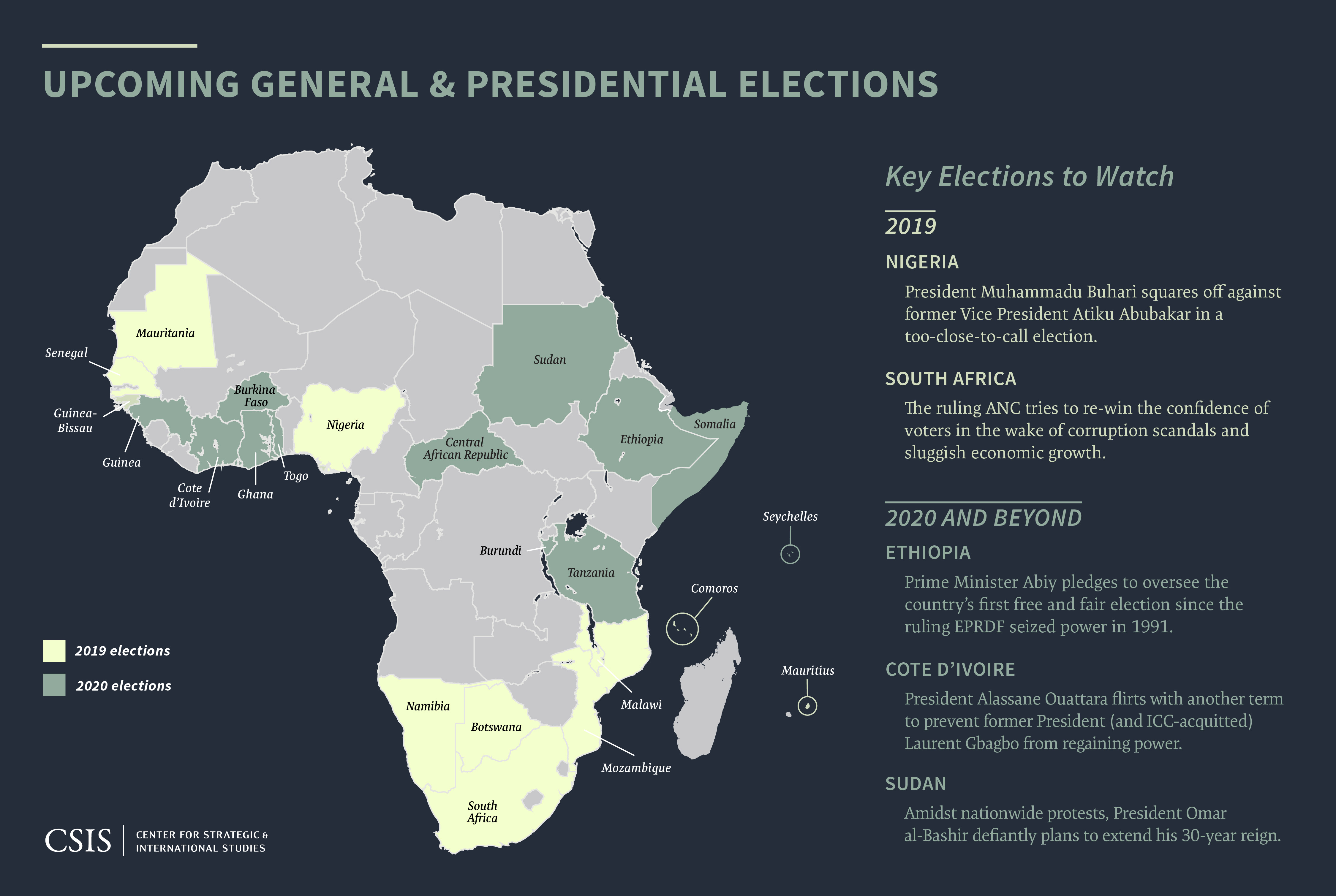 The next wave of polls is likely to exhibit more volatility in part due to urbanization, underperforming economies, and majority youth populations. In addition, greater access to technology has upset the balance of power in many countries.

In February 2018, the U.S. National Intelligence Council judged that sub-Saharan Africa is “entering a period of heightened competition between governments and their citizens over the nature of democratic governance that is likely to breed persistent volatility through 2022.”3 African elite and publics are redefining the rules of competition, showing a new willingness to protest more often and longer; spend more money on campaign spectacle and consultants; and employ a range of technological tools to mobilize, deceive, and hack. Furthermore, a new crop of politicians, outsiders, and activists are challenging the status quo. 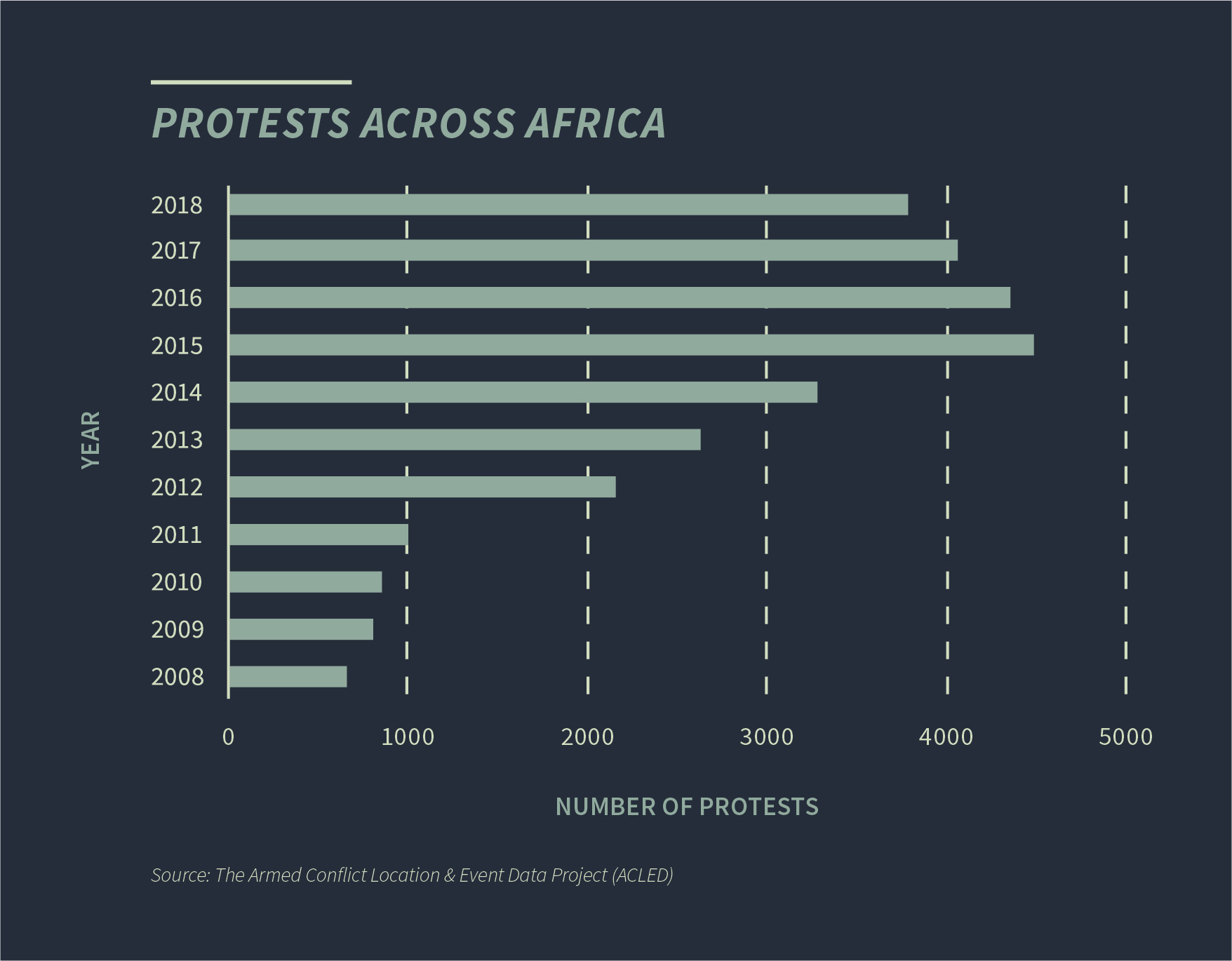 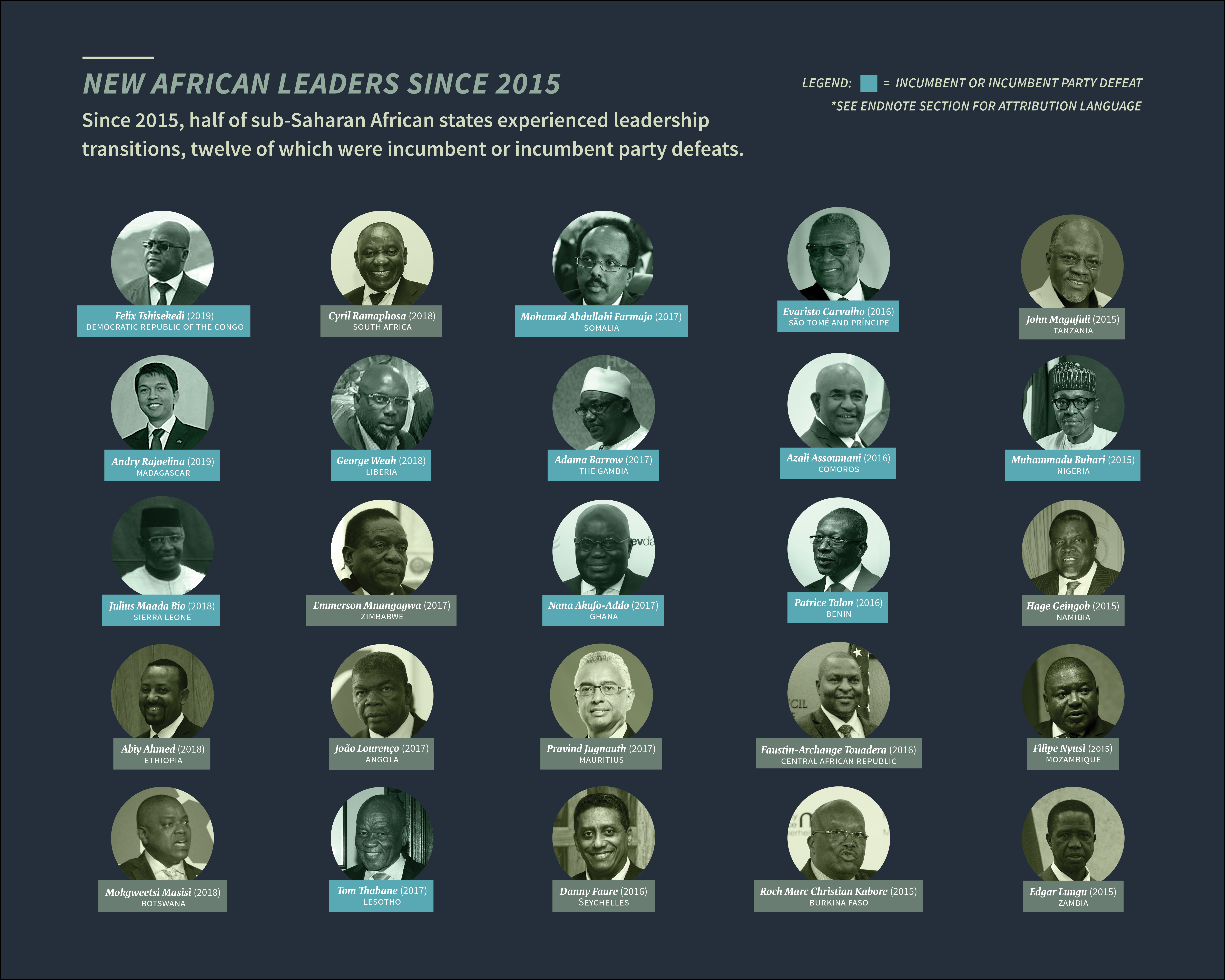 The international community, consequently, seems to have little bandwidth or appetite for governance issues in sub-Saharan Africa. No wonder a BBC correspondent recently asked: “why has the mute button been pressed on Africa?"

These dynamics are unsettling the status quo, even if it has muddied the picture about the state of democracy in sub-Saharan Africa. Freedom House, for instance, recently reported that 2018 marked both notable democratic progress in a number of pivotal countries and increasing threats to freedom in others.25 Whether this means the region is moving in the right or wrong direction,26 it is undeniable that the rules around elections are changing. Both incumbents and their opponents are testing new strategies to succeed in this emerging space, which partly explains some of the recent leadership turnovers, election malfeasance, legal (and extralegal) challenges, and government-sponsored violence.

Both incumbents and their opponents are testing new strategies to succeed in this emerging space, which partly explains some of the recent leadership turnovers, election malfeasance, legal (and extralegal) challenges, and government-sponsored violence.

While the region’s governance landscape continues to shift, the United States is failing to make commensurate investments and is falling behind in revamping its policies and tactics. The United States has dedicated limited resources and personnel to allocate for most elections outside of Nigeria and possibly Ethiopia in 2020. Even when there is considerable interest and attention, the United States and other international stakeholders have missed opportunities to respond to warning signs. For instance, the joint National Democratic Institute (NDI)/International Republic Institute (IRI) delegation in September 2018 flagged vote-buying in the Nigerian gubernatorial election as a threat to credible elections.31 Aside from some public statements,32 there has not been a concerted pressure on the government to investigate and prosecute instances of vote-buying.

Moreover, U.S. and international election monitoring are “decades out of date,” according to Stephan Chan of the School of Oriental and African Studies. In a recent essay, he points out that observation missions are by nature decentralized while rigging has become more centralized.33 U.S. and other international observers, however, depend on the government to grant access to certain regions and parts of the election process; it is not as useful to observe voting at a polling station if most of the manipulation is occurring in collation centers. In addition, most observers do not have the technological expertise to counter disinformation on social media platforms, circumvent government internet controls, safeguard election results from hacking, or detect digital tampering.

U.S. and international election monitoring are “decades out of date,” according to Stephan Chan of the School of Oriental and African Studies.

Toward a New U.S. Playbook

The United States has an opportunity to update its approach to elections by reconfiguring its investments, broadening its partnerships, and committing to principled interventions because it has positive effects on core U.S. interests including economic prosperity and stability. While Africans are ultimately in the driver’s seat, the U.S. government could reinforce some of the positive democracy trends and constrain countervailing forces.

This realignment will not be quick or easy. The most recent USAID data indicates that U.S. funding for governance and civil society programming in the region typically hovered around only 250-350 million dollars a year, and that in 2018, this sum was then cut in half.34 Furthermore, in October 2018, the State Department’s Office of the Inspector General noted that the Bureau of Democracy, Human Rights, and Labor did not have enough staff to manage its 450 active awards.35

While Africans are ultimately in the driver’s seat, the U.S. government could reinforce some of the positive democracy trends and constrain countervailing forces.

It also will necessitate the training of election specialists to counter social media disinformation and electronic voting manipulation. It will entail covering more elections across the region and for longer stints. Finally, it will involve a more holistic approach, coordinating interventions with the U.S. Congress, international allies and organizations, and most importantly, civil society and influential institutions in the region.

Beginning in November 2018, the Center for Strategic and International Studies (CSIS) convened election and country subject matter experts to discuss recent polls in sub- Saharan Africa. We used a case study approach to examine elections in Zimbabwe and the DRC, as well as upcoming votes in Nigeria and Ethiopia. Based on our discussions, we identified three focus areas for reinvigorating U.S. engagement on and support for elections in the region, as well as restoring confidence in international observation missions. Below is a menu of tactics to draw from depending on specific circumstances next wave of elections.


Judd Devermont is the director of the Africa Program at the Center for Strategic and International Studies in Washington, D.C.

This brief is made possible by the generous support of the Open Society Foundations.

CSIS BRIEFS are produced by the Center for Strategic and International Studies (CSIS), a private, tax-exempt institution focusing on international public policy issues. Its research is nonpartisan and nonproprietary. CSIS does not take specific policy positions. Accordingly, all views, positions, and conclusions expressed in this publication should be understood to be solely those of the author(s).