The Gulf Cooperation Council (GCC) states have big ambitions for natural gas. Strong domestic consumption growth, a growing gap between production and consumption, and geopolitical motivations have led several Gulf states to prioritize domestic gas developments in a push to extend or regain self-sufficiency. Gas projects will remain a high priority for the Gulf national oil companies (NOCs), but several costly domestic developments look questionable in the current environment and development could be deferred.

Natural gas has traditionally been sold at low, regulated prices in the GCC countries to boost domestic industry, encourage industrialization, and provide an inexpensive public good to consumers. The vast majority of natural gas in the Gulf states, aside from Qatar, is associated gas, or volumes produced in tandem with oil output. By and large, gas in the Gulf remains an inexpensive and highly subsidized fuel, befitting its history as a byproduct of more lucrative oil production.

Cheap gas has fueled strong demand. Since 2011, gas consumption in the GCC states has grown by more than 4 percent per year, and there are growing concerns over the ability to meet future demand from the power sector and industry. Some analysts argue that runaway gas demand growth in the Gulf will ease in the coming decade as industrial demand plateaus and the power sector turns to alternative fuel sources, including solar, wind, nuclear, and even coal. But for now, the gas fortunes of the Gulf states have diverged. Aside from Qatar—already the world’s largest liquefied natural gas (LNG) exporter and embarking on a massive capacity expansion—most of the region is gas short. 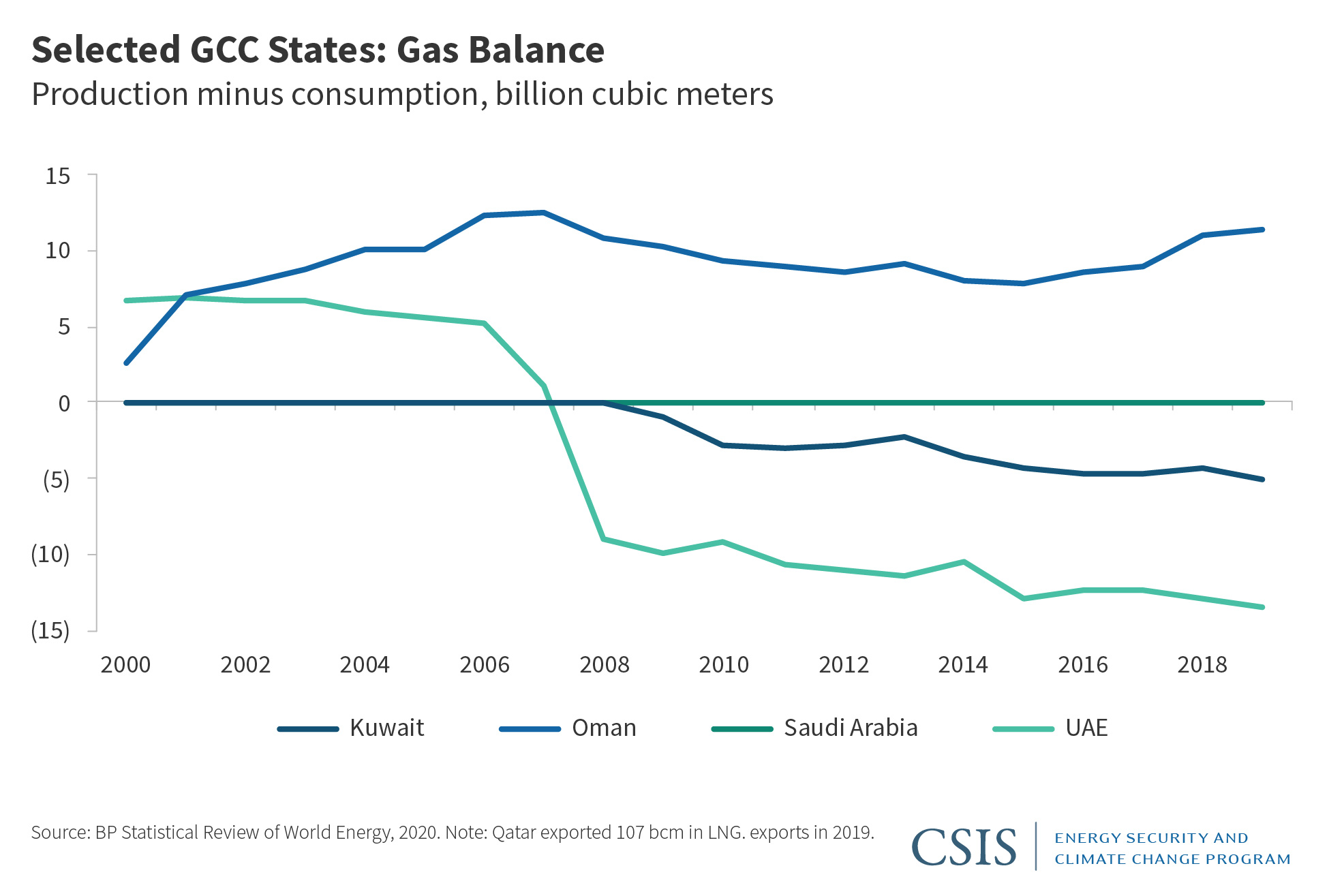 Import dependence has grown over the past decade in the United Arab Emirates (UAE) and Kuwait (see chart). Saudi Arabia has maintained self-sufficiency in gas for decades but has had limited success in developing new non-associated gas resources. Ethane feedstock for petrochemicals facilities is also increasingly scarce. Future petrochemicals projects in the GCC (aside from Qatar) will have to rely on most costly crude oil-derived liquids feedstock.

One response to the concerns over gas scarcity has been to raise prices. The oil price downturn that began in 2014 prompted several GCC states to cut subsidies for oil products, electricity, and natural gas. In 2016, Saudi Arabia raised its regulated natural gas (methane) price by 67 percent to $1.25 per million British thermal units (MMBtu) and raised its ethane price by 133 percent to $1.75 per MMBtu. Saudi Aramco’s first international bond prospectus last year suggested it would increase gas prices in 2020 to up to $3.84 per MMBtu for several non-associated gas areas. Bahrain raised its natural gas price incrementally each year beginning in 2015, and in 2017 Oman raised gas prices for industry and the power sector. Still, these relatively modest gas price reforms are not sufficient to change the outlook for the Gulf states.

Historically, regulated natural gas prices have discouraged exploration and development of natural gas resources in the GCC states. The Gulf NOCs have generally focused on oil projects that generate more export revenues. However, the Gulf NOCs are now seeking to jump-start gas development, including new licensing, partnerships, and price reforms.

Oman was an early leader in making concessions on commercial terms. In 2013, BP and its partners sanctioned the Khazzan tight gas project in Block 61, after years of negotiations to secure a gas price that would be sufficient to incentivize development. Khazzan began production in 2017, and phase 2 of the project (Ghazeer) came online in October 2020. Output at Block 61 should reach 1.5 billion cubic feet per day (Bcf/d) and will free up more gas feedstock for Oman LNG. Oman is also hoping to develop the Mabrouk North East field, a 2018 discovery that contains 4 trillion cubic feet (Tcf).

More recently, the UAE has prioritized gas exploration and development in an effort to achieve gas self-sufficiency by 2030. An important driver is to reduce Abu Dhabi’s dependence on gas imports from Qatar via the Dolphin pipeline, which currently delivers approximately 2 Bcf/d to the UAE, accounting for about 25 percent of domestic demand. Abu Dhabi hopes that a combination of unconventional gas, sour gas, and offshore gas cap developments at oil fields will obviate the need for gas imports from Qatar by 2032, when the Dolphin contract expires. Key gas projects include the offshore Hail, Dalma, and Ghasha fields in the offshore Ghasha concession and the Ruwais Diyab onshore exploration effort between Abu Dhabi National Oil Company (ADNOC) and Total. In early 2019, Occidental Petroleum was also awarded onshore Block 3 in Abu Dhabi, which is located close to ADNOC and Oxy’s ADNOC Sour Gas (Al Hosn) facilities. Last, in February 2020, ADNOC announced the Jebel Ali discovery along the Abu Dhabi-Dubai border, which comprises 80 Tcf of gas in place. However, the NOC has revealed little information about the potential recovery rate at this massive shallow gas field.

In Saudi Arabia, gas continues to play second fiddle to crude and natural gas liquids, which together accounted for 85 percent of Saudi Aramco’s total hydrocarbons production last year. One of Aramco’s key gas projects in recent years is the 2.5 Bcf/d Fadhili Gas Plant. The facility will process non-associated gas from onshore and offshore fields. It is part of Aramco’s broader Master Gas System, which will expand the country’s network capacity to 12.5 Bcf/d. Aramco’s goals are to reduce flaring and help direct more gas to industrial consumers and especially to power generation, curbing direct burning of crude and freeing up more volumes for export. Developing new non-associated gas production has been a priority for years, and while Aramco has found some new reservoirs in existing fields, it has not scored any major discoveries. The company is now focusing on unconventional gas development, including the Jafurah Basin megaproject that could deliver 2.2 Bcf/d of gas and 425 million cubic feet per day of methane, as well as natural gas liquids—if the company can develop it profitably (see below).

Despite the strategic drivers for gas developments in the Gulf, the economics remain challenging. Several projects have already been delayed or re-tendered in an effort to cut costs, while the economics of other megaprojects seem questionable. Also, as in other regions, there is growing competition for gas from renewables and even nuclear energy in the case of the UAE.

In response to the oil price downturn, Saudi Aramco cut capital expenditure by 11 percent in the first nine months of 2020 compared with the previous year. It is reassessing its $20 billion crude oil-to-chemicals project in Yanbu and may also tap the brakes on its Jafurah unconventional gas development, estimated to cost up to $110 billion over 16 years. (For comparison, this is twice the cost of Gorgon LNG in Australia, the most expensive LNG project in history). Jafurah presents significant technical challenges, with Aramco looking to deploy new multistage hydraulic fracturing and well stimulation programs in Saudi Arabia for the first time and to pioneer the use of treated seawater in fracking.

In the UAE, there will be similar questions over potential deferrals of gas projects, especially the Jebel Ali development. It is early days for Jebel Ali, and ADNOC and its partner Dubai Supply Authority have not given many indications of the project’s ultimate cost or the pace of development. But generally, ADNOC perceives some advantages in investing through the downturn, suggesting it is determined to keep gas projects on track. In April, ADNOC and its partners terminated two engineering contracts for the Dalma sour gas development and re-tendered the contract for the offshore field in search of better terms.

The Gulf NOCs could arguably find less expensive alternatives to costly unconventional gas and sour gas projects. LNG imports in the GCC states began in 2009 as a stopgap measure to help meet seasonal demand peaks but have become a more regular feature of yearly demand. Kuwait and the UAE (both Dubai and Abu Dhabi) are LNG importers, and Kuwait will soon open the GCC’s largest LNG import facility at Al-Zour, with a capacity of 22 million tons per year (mmtpa). Kuwait also recently signed a 15-year supply contract with Qatar Petroleum for up to 3 mmtpa. Bahrain has commissioned its first regasification plant, although it has not imported cargoes to date. Saudi Arabia, which has managed to sustain self-sufficiency in gas for decades, has long contemplated the potential need for LNG imports and has ambitions to become a player in LNG trading. It may seem paradoxical that the GCC countries have turned to LNG imports to meet demand, given the potential for pipeline imports from within the region, but political realities (among other challenges) impede pipeline imports from Iran or Qatar.

Last, there is growing competition for gas from other fuels. As in other regions, renewable energy is expected to grow rapidly, in part due to the Gulf’s potential advantages in solar power. The International Renewable Energy Agency estimated in early 2019 that although renewable energy accounts for less than 1 percent of installed capacity in the GCC states, 7 gigawatts (GW) of renewable energy projects were in the pipeline. In August, the UAE became the first Arab Gulf country to produce nuclear power, and at full capacity, its four 1.4 GW reactors at Barakah are expected to meet about one-fourth of the UAE’s power demand. Saudi Arabia has also considered nuclear energy development and mooted plans to develop as many as 16 nuclear reactors by 2040, although such plans remain in the early stages. Even coal, surprisingly, has some upside in the Gulf. The 2.4 GW coal-fired Hassyan power plant is under construction in the UAE and expected to come online in 2023.

This ample competition does not suggest that the Gulf states will forego domestic gas developments, even the more costly projects. Unconventional gas and sour gas projects have the potential to create jobs, support the local services sector, and build capacity in new areas. There is considerable potential for Saudi Aramco, for example, to boost its fracking and well stimulation knowledge and its familiarity with large-scale unconventional gas developments with Jafurah. However, there is no doubt that expensive GCC gas projects carry an opportunity cost. Gas price reforms could help to both incentivize domestic gas developments and to curtail wasteful consumption—but raising prices during an economic downturn is no easy task.

For now, gas is likely to remain a high priority in the Gulf, but one that will have to adjust to shifting internal and external conditions. The pace of domestic gas developments will affect the Gulf’s growth as an LNG demand center. The domestic outlook will also shape the ambitions of Gulf NOCs to expand their LNG trading capacity and emerge as equity investors in global LNG projects.