Guyana, the world’s newest oil-exporting nation, has finally resolved the months-long dispute over its election results as Mohamed Irfaan Ali was sworn in as president on August 2. His government will confront a tense political environment, elevated economic expectations, and all the challenges associated with managing an oil revenue boom.

Guyana’s political dispute dragged on for five months following its March 2 election. Former president David Granger’s A Partnership for National Unity/Alliance for Change (APNU/AFC) coalition initially claimed victory but was forced to agree to a recount after allegations of vote fraud, centering on reported results from one large voting district. The recount found that the opposition People’s Progressive Party/Civic (PPP/C) won the most votes, but the chief elections officer Keith Lowenfield refused to submit a final report to show the official results. Instead, Lowenfield concluded that 29 percent of the PPP/C’s vote count—and 115,000 votes in total—should be thrown out due to irregularities. His report was rejected by election observers from the Caribbean Community (CARICOM), and numerous legal challenges ensued.

As the post-election standoff continued, Guyana’s neighbors and the international community lost patience with Granger’s government. On July 15, Secretary of State Mike Pompeo announced the United States would impose visa restrictions on “individuals who have been responsible for, or complicit in, undermining democracy in Guyana” as well as their immediate family members.

Many feared the election results would be contested due to Guyana’s polarized political climate. Indeed, political uncertainty had already reigned for 14 months before the March vote, following a December 2018 no-confidence vote against Granger that set the wheels in motion for a new election. Although Ali has now been sworn in as President, Granger has vowed to challenge the declared results “lawfully, peacefully and purposefully.”

Guyana’s newfound oil bounty has raised the political stakes. GDP per capita in this small country of 780,000 people is around $5,500. The economy has traditionally been based on agriculture and commodities, including bauxite (aluminum ore), sugar, gold, rice, and timber. But beginning this year, oil revenues will transform the economy. Before the oil price crash, the International Monetary Fund forecasted a quadrupling of GDP between 2019 and 2024. Even with lower oil prices, Guyana’s central bank anticipates that the economy will grow by 57 percent this year.

Oil revenues are likely to entrench Guyana’s divisions and its long-standing ethnic identity politics. Citizens of Indian origin—who account for around 40 percent of the population—generally support the PPP/C, while Afro-Guyanese, who make up roughly 30 percent of the population, align with the APNU/AFC grouping. Indigenous groups or Amerindians account for close to 10 percent of the population and often make up a swing vote. For most of Guyana’s history, the PPP/C has controlled the government thanks to its demographic advantage, ensuring its command of funds for patronage, government jobs, and contracts. But after Granger successfully broadened support for his coalition beyond the Afro-Guyanese community, the APNU/AFC coalition won control of both Parliament and the presidency in 2015. It is not surprising that this year’s election came to resemble a winner-take-all battle since the victor will enjoy far greater resources and an incumbent advantage for years to come.

At the giant offshore Stabroek Block, ExxonMobil and its partners Hess and China National Offshore Oil Corporation (CNOOC) have now made 16 discoveries and found 8 billion barrels of oil equivalent in recoverable resources, excluding their most recent find. If all of these resources are eventually booked as proven reserves, Guyana’s reserve base will be larger than Mexico and Colombia combined (see BP Statistical Review of World Energy).

Oil production at the Liza field began last December and was scheduled to ramp up to 120,000 barrels per day (b/d) by June 2020, although technical problems and Covid-19 complications have created delays. It should reach peak output of 120,000 b/d in August, according to Hess. In May 2019, ExxonMobil and its partners sanctioned Liza Phase 2, which will add another 220,000 b/d in production by 2022. Final investment decision (FID) for Liza Phase 3, centered on the Payara field, could add another 220,000 b/d. Political uncertainty has delayed government approval of Liza Phase 3, which was expected last year, but the companies still aim to produce 750,000 b/d by 2026.

This timeline seems ambitious. Governance of the oil sector was the central issue in the run-up to the election, with the opposition PPP/C assailing the government for failing to secure a larger share of oil revenue. ExxonMobil, Hess, and CNOOC renegotiated the production sharing contract (PSC) for their block in 2016, and the 2 percent royalty rate, 50 percent profit oil split, 75 percent cost recovery ceiling, and $18 million signature bonus generated a backlash. Critics argued that huge discoveries had de-risked the block and the broader Guyana-Suriname Basin, and the government should have made more significant adjustments to the royalty and other terms. Those calls have grown louder as the recoverable resource base has more than doubled since early 2018.

Change in Government Could Slow Development

By necessity, frontier countries offer friendly contract terms to attract investment, but things tend to change quickly when companies make large discoveries. When citizens and policymakers become aware of the economic resources at stake, they often call for a reassessment of contracts to better reflect risks and rewards for investors. Governments must balance public expectations and the desire for more revenues on the one hand against concerns over contract sanctity and future investment on the other, as well as the economic viability of key projects. This is a difficult balance to achieve. Other emerging oil and gas producers facing a similar dilemma include Mauritania, Mozambique, Papua New Guinea, and Senegal.

It is even more challenging for governments to make sound decisions when there is an asymmetry of expertise. Oil and gas companies have many analysts who can model revenue and cash flows under various price assumptions, production scenarios, and fiscal terms. But regulators in developing countries often lack the technical expertise to scrutinize contract terms effectively. Governments also struggle to manage the onslaught of consultants and advisers that follow oil discoveries—even well-intentioned groups that want to help new producers build effective institutions and escape the resource curse and Dutch Disease.

Unfortunately, so far, Guyana seems unprepared to manage oil rents and regulate the sector. In January 2019, Guyana approved a new National Resource Fund, a sovereign wealth fund meant to save most oil revenues for future generations and cap the amount that can be transferred for budget spending. But the PPP/C contends that Granger had no standing to approve the fund, following the no-confidence vote against him the previous month. Other institutions in Guyana are still understaffed, given the complexity of regulating the sector. The Department of Energy was created only in 2018 and is still building capacity, with help from the Inter-American Development Bank and others.

Investors in the oil sector will surely welcome the end of Guyana’s political standoff, but the change in government could create further delays and significant uncertainty. The PPP/C has promised to review Guyana’s fiscal terms and renegotiate PSCs—but has stopped short of calling for retroactive changes to the Stabroek Block PSC. This seems to have reassured the project partners, but it is not impossible that Ali’s government will change tack. At a minimum, even as the political situation settles, it could take months to make key personnel appointments and review terms and regulations. These delays are no doubt frustrating for investors, but they could ensure more transparency and deliberation over oil sector governance at a critical period for Guyana.

Ben Cahill is a senior fellow in the Energy Security and Climate Change Program at the Center for Strategic and International Studies (CSIS) in Washington, D.C.

EU’s latest sanctions on Russian Oil: what are they and will it work?
Energy Post EU | Ben Cahill
June 15, 2022
In the News

Biden political gamble on Saudi trip unlikely to drive down gas prices
The Hill | Laura Kelly and Rachel Frazin
June 12, 2022
In the News 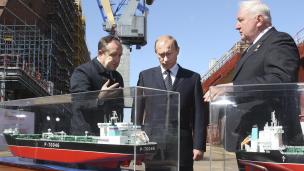