As Venezuela’s unprecedented humanitarian crisis continues to deepen, Nicolas Maduro’s regime has blatantly taken advantage of the population’s hardship to strengthen its political control. The Maduro regime’s most recent iteration of this tactic places special emphasis on distorting food supply programs, effectively using food as a political tool to manipulate and control the Venezuelan population.

Venezuela’s collapsed economy, with a GDP decline of about 45 percent in the last four years and annual inflation reaching over 40,000 percent, has created an increasingly vulnerable Venezuelan population. Despite the unprecedented economic and humanitarian crisis, the regime continues to reject aid from abroad and impose ill-intentioned policies that only deteriorate the economy further. As part of former president Hugo Chavez’s playbook, Maduro is strengthening a politically motivated subsidized food distribution system called Local Committees for Supply and Production, or CLAP in Spanish. The food aid provided through CLAP is a desperate and strategic response to rampant food scarcity and poverty in Venezuela. The country has seen its poverty rate explode from 55 percent in 1998, when Chavez came to power, to nearly 90 percent today. 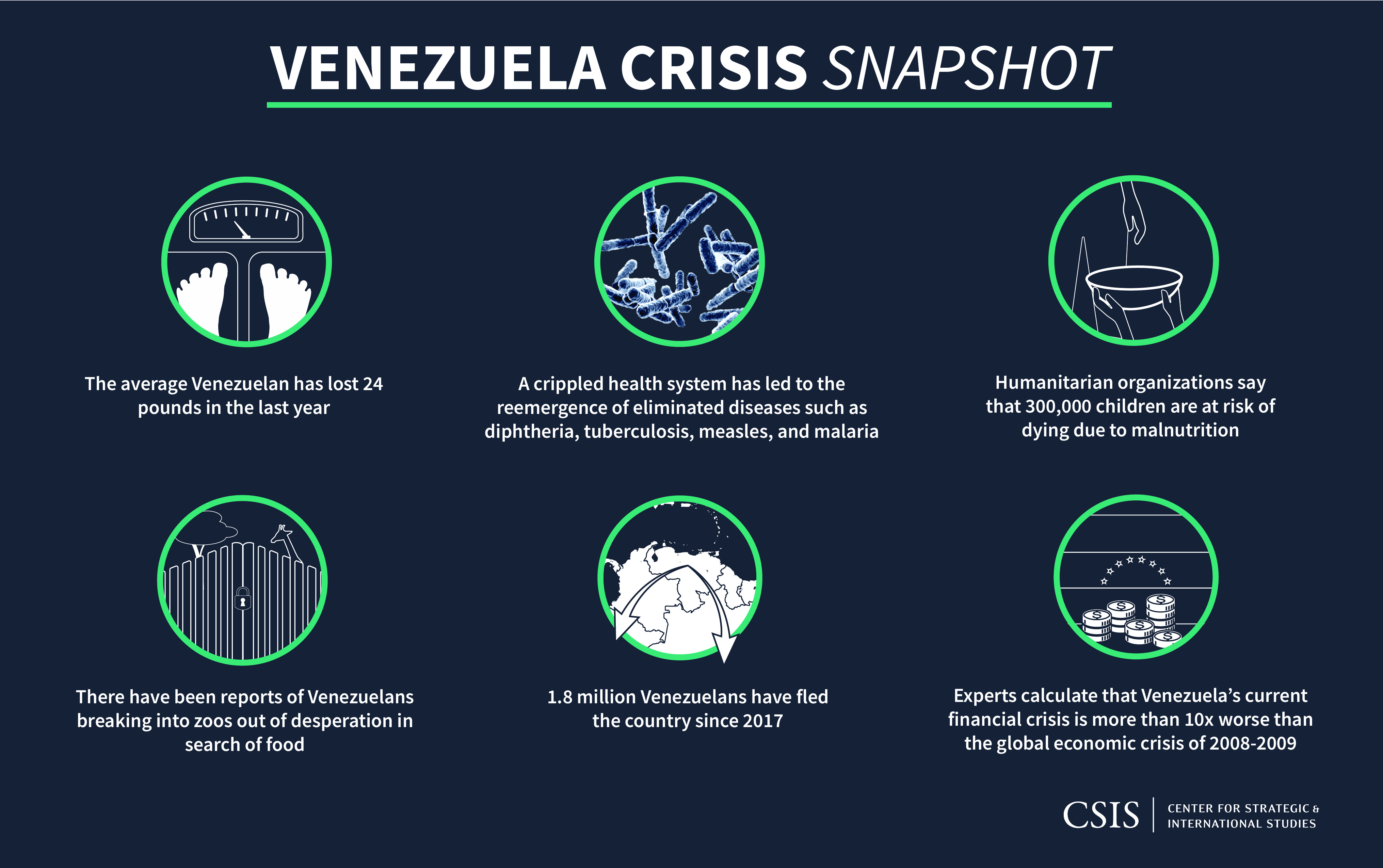 Following Chavez’s legacy, the Maduro regime has continued implementing highly ideological policies that undermine agricultural production, succumbing to a consequence known as the Dutch Disease. Oil production can crowd out other sectors, which, in an undiversified economy results in an overreliance on cheaper imports rather than domestic products. In addition, the government imposes strict price controls, hurting producers further and leading to extreme shortages. The regime has been unable to control inflation, which has disintegrated Venezuela’s economy. As a result, many poor Venezuelans are now dependent on CLAP deliveries to put food on the table. These deliveries, which are almost entirely made up of imported goods, typically consist of the most basic food items—mainly flour, rice, oil, and sugar. Nearly half of the population said that CLAP has become an “essential” part of their diet. Yet, this statistic hides troubling patterns when disaggregated by political party. While 83 percent pro-Maduro voters say that CLAP is their main source of food, only 14 percent of independents say the same. Accordingly, while 73 percent of pro-Maduro voters have access to three meals a day, only 54 percent of independents can say the same.

The link between food and politics is based in the regime’s introduction of a Carnet de la Patria (Homeland Identification Card), a federally issued hi-tech card that has become increasingly necessary to access not only CLAP benefits, but also healthcare, university, government jobs, and even government subsidies gifted at Maduro’s personal discretion. This strategy allows the Maduro regime to provide greater assistance to its own supporters, and to target others who are desperate enough to change their vote in order to receive food aid. The use of the carnet de la patria has recently been expanded primarily in urban centers and poor neighborhoods—even though opposition support has increased in those areas. It is becoming evident that the Maduro regime is weaponizing its safety net program during a time of crisis in order to prioritize, amplify, and concentrate political power.

The CLAP program is sustaining the Maduro regime not just through political manipulation, but financially as well. Government, military officials, and a network of operations personnel utilize the CLAP program to personally profit, directing tens of millions of dollars away from Venezuelan citizens and into their own pockets. Those overseeing the program are able to turn nearly a 200 percent profit on the sale of every CLAP box. The price of the goods within each CLAP box is approximately USD $12—yet the program’s facilitators charge the Venezuelan government USD $35 per box, as approved by the National Center for Foreign Commerce ( CENCOEX). Similarly, corruption runs through the distribution channels, as human rights-abusing military officials and pro-regime-controlled neighborhoods facilitate CLAP allocation for personal gain. The amount is not trivial; in a recent shipment of CLAP boxes, Venezuela paid USD $29 million, while the cost of the food itself was no more than USD $7 million. For the amount of money paid out for these boxes, Venezuela could have purchased three times as much food from abroad as the CLAP boxes provided.

While the regime’s objective is to “gradually reduce [Venezuela’s] dependence on foreign food,” in reality, 90 percent of the CLAP boxes are imported from Mexico and another 4 percent from neighboring Colombia. In addition, CLAPs bring health security risks for the most vulnerable. The distributed food often fails basic health quality standards—with spoilage and unsanitary conditions causing allergic reactions, diarrhea, and exacerbating children’s health nutrition issues from the ongoing humanitarian crisis. Compounded with a deteriorating health system that is failing the basic needs of its population, unsurprisingly, infant and child mortality rates are the highest they have been in the last half century.

The weaponization of the CLAP is a symptom of a desperate regime determined above all to hold onto power. An effective response will necessitate a concerted effort of international actors to apply sufficient pressure to bring about political change. While existing international sanctions have been successful in affecting some aspects of the regime, these efforts have been undermined by the simultaneous weakening and dismantling of the democratic forces within Venezuela. Coordinating internal and external forms of pressure is urgently needed.

The United States and other like-minded countries must work together to both expose and dismantle the politicized and corrupt CLAP program, and work with internal and international partners to provide aid inside of Venezuela. This will involve the imposition of additional individual sanctions, targeted at those responsible for CLAP operations, as well as the development of a framework to facilitate the delivery of donations and aid. For example, the use of cryptocurrency to safely transfer worldwide donations, following a model like EatBCH, is a novel approach already creating a positive impact for Venezuelans on the ground today. More peer-to-peer electronic cash transfers should be encouraged to assist with humanitarian aid from abroad.

More peer-to-peer electronic cash transfers should be encouraged to assist with humanitarian aid from abroad.

Given that the clear majority of CLAP products are originating abroad—specifically Mexico—this provides Mexico an additional strategic leverage point to assist Venezuela. Prior to the next administration’s transition in December, the current Mexican government should consider helping to bring to light the criminal nature of the CLAP operations and target sanctions on those responsible for the program. Above all, it is essential for the international community to maintain a strategy that links both external pressure and renewed internal political opposition to bring about a democratic transition.

Moises Rendon is an associate fellow and associate director of the Americas Program at the Center for Strategic and International Studies (CSIS) in Washington, D.C. Jacob Mendales is an intern with the CSIS Americas Program.