More Than Missiles: China Previews its New Way of War

On October 1, the People’s Republic of China (PRC) celebrated the seventieth anniversary of its founding. Among the pageantry was a military parade in which the People’s Liberation Army (PLA) performed a highly orchestrated show of strength, exhibiting many of its strategic weapon systems. While China has regularly held such displays in the past, this year’s parade was exceptional for the number and diversity of new, high-tech weapons. New systems represented 40 percent of the weapons showcased.i Although a carefully choreographed piece of propaganda, the parade nevertheless provides clues about China’s emerging warfighting doctrine. In doing so, it also revealed a nation seeking to supplant the United States as the dominant military and technological power in the Asia-Pacific region.

Despite their increased sophistication, the nuclear delivery vehicles displayed fill similar roles to previous systems, signaling continuity with existing Chinese limited nuclear doctrine.iv This is in contrast with Russia, which is significantly expanding the scope and ambition of its nuclear doctrine. And while U.S. intelligence projects that China could double the size of its nuclear force in the coming decade, its arsenal will remain a fraction of the size of U.S. and Russian forces.v However, observers remain concerned over the dual-capability of China’s medium-range systems. China’s DF-26, for example, has both conventional and nuclear variants, and similar uncertainties persist over the nuclear capability of China’s hypersonic glide vehicle (HGV) programs. Chinese commentators made a point, however, to characterize its new DF-17 HGV as conventional-only.

China’s embrace of high-tech “informationized” warfare reflects the many lessons the PLA has learned from observing U.S. operations over the past two decades. During this period, the United States enjoyed the uncontested use of advanced ISR and C2 networks. The PLA has watched this advantage become a dependency, one which it is now looking to exploit. This brief will provide an overview of the systems and capabilities the PRC emphasized in its 70th anniversary celebration and attempt to explain how they fit into China’s military vision. These include electronic warfare, drones, and China’s array of new missiles. 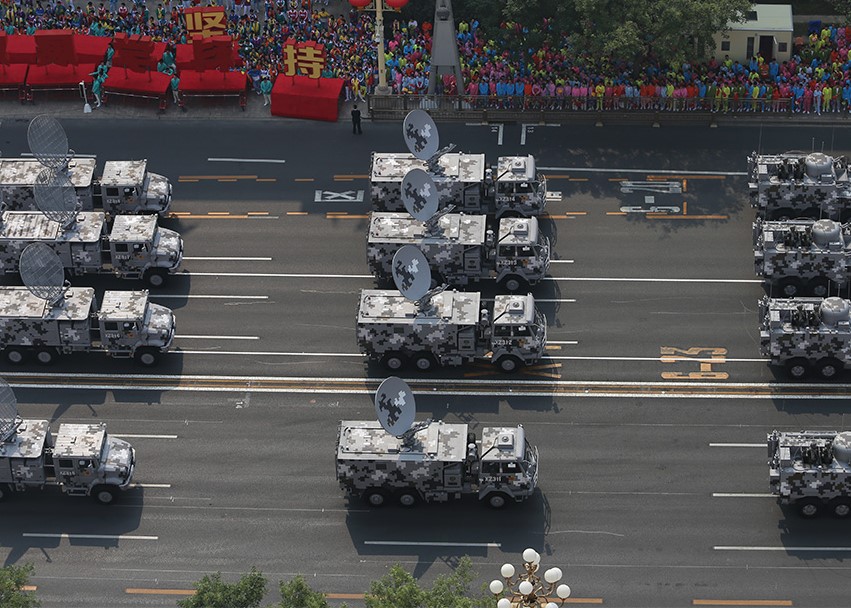 Consistent with its goal of degrading U.S. ISR, the PLA exhibited a large variety of electronic warfare systems.vi These included numerous ground-based jammers.vii The PLA also revealed two varieties of aerial jamming drones, including an electronic-warfare variant of its ASN-207 UAV, which previously only performed reconnaissance missions. According to Chinese state media, this variety of electronic warfare platforms highlighted China’s efforts “to seize the right to control information” during military operations.viii

The United States’ wireless battle networks are essential for completing its “kill chain,” the process of integrating intelligence, command, and fire control data to employ precision-guided weapons. By investing in electronic warfare assets, the PLA aims to sever a vital link in this chain. While a focus on information denial has long remained an element of PLA doctrine, this display of jamming units showcased the PLA’s information denial efforts across multiple domains—intended to disrupt U.S. communications on land, air, and sea.ix Underscoring this point was the presence of the PLA Strategic Support Force, China’s newly-formed cyber-, space-, and electronic-warfare service. The October 1 event was the first appearance of the PLASSF in a military parade.x 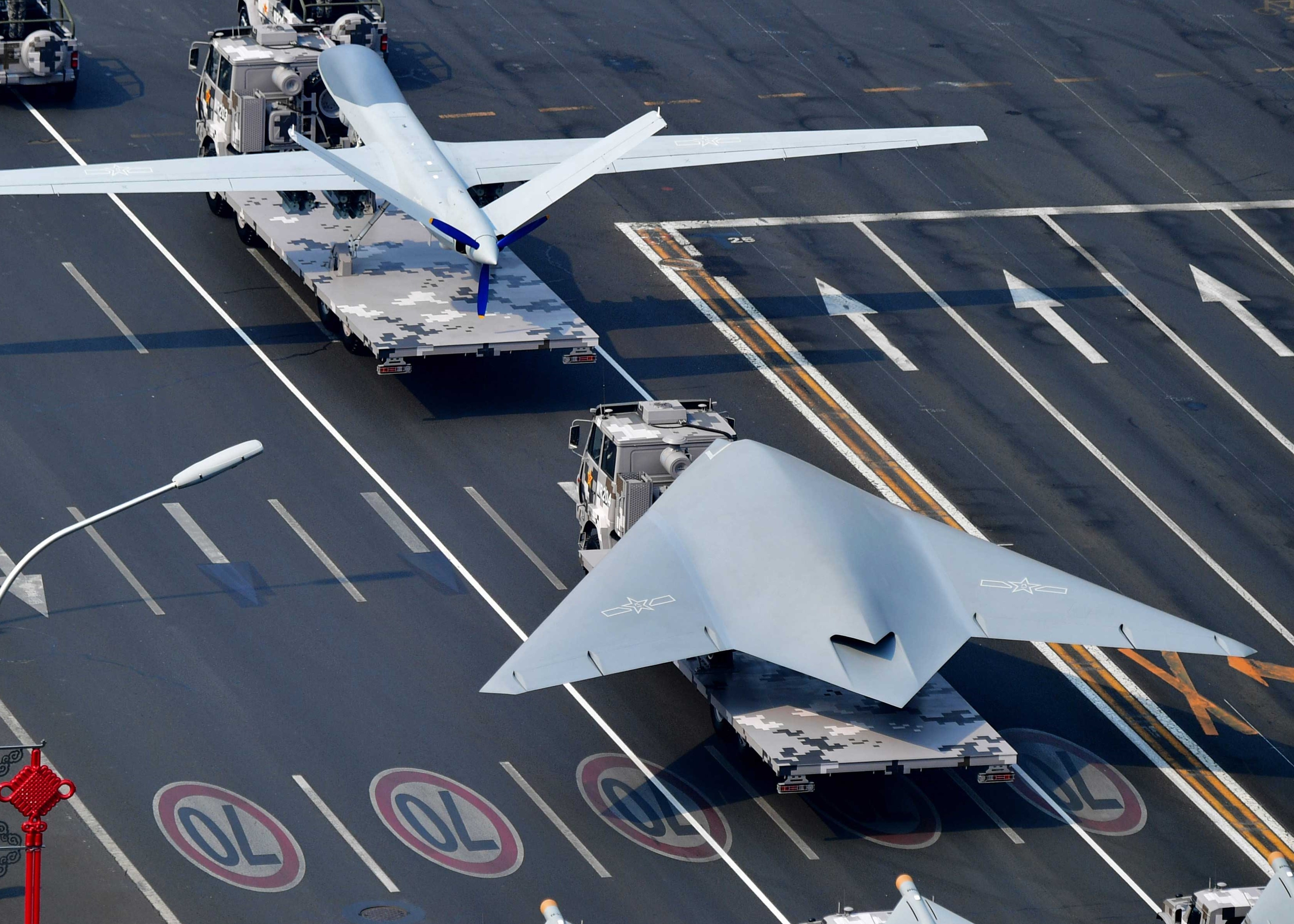 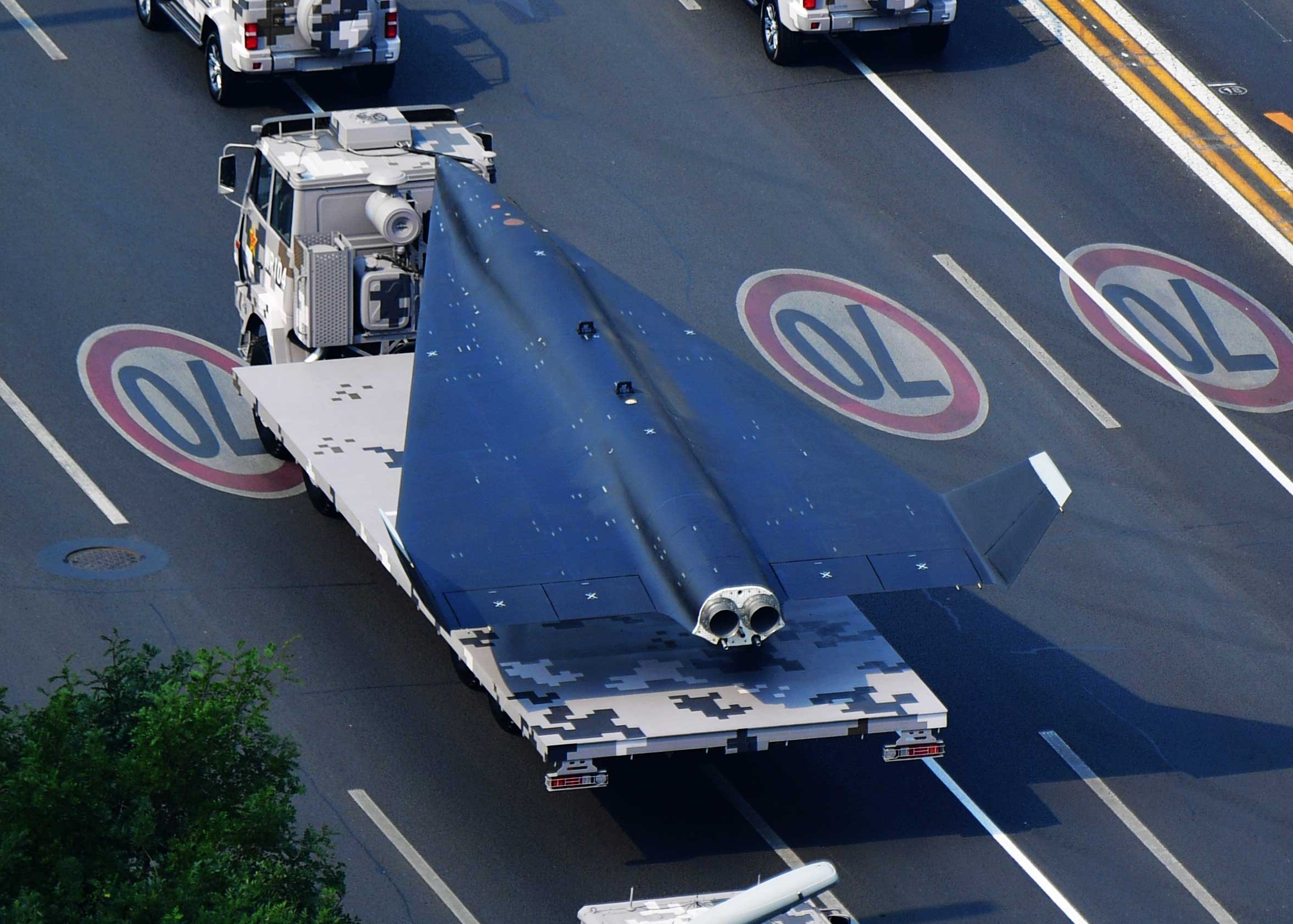 In addition, China revealed the WZ-8, an air-launched supersonic drone. Likely released from a bomber, the rocket-propelled WZ-8 is intended to conduct reconnaissance and battle damage assessment on U.S. carrier strike groups.xii Though the WZ-8 is unlikely to possess the loitering capability needed to support missile targeting, it could aid Chinese aircraft in locating and targeting enemy surface forces. According to media reports, the drone may have already entered service with the PLA’s Eastern Theatre Command.xiii 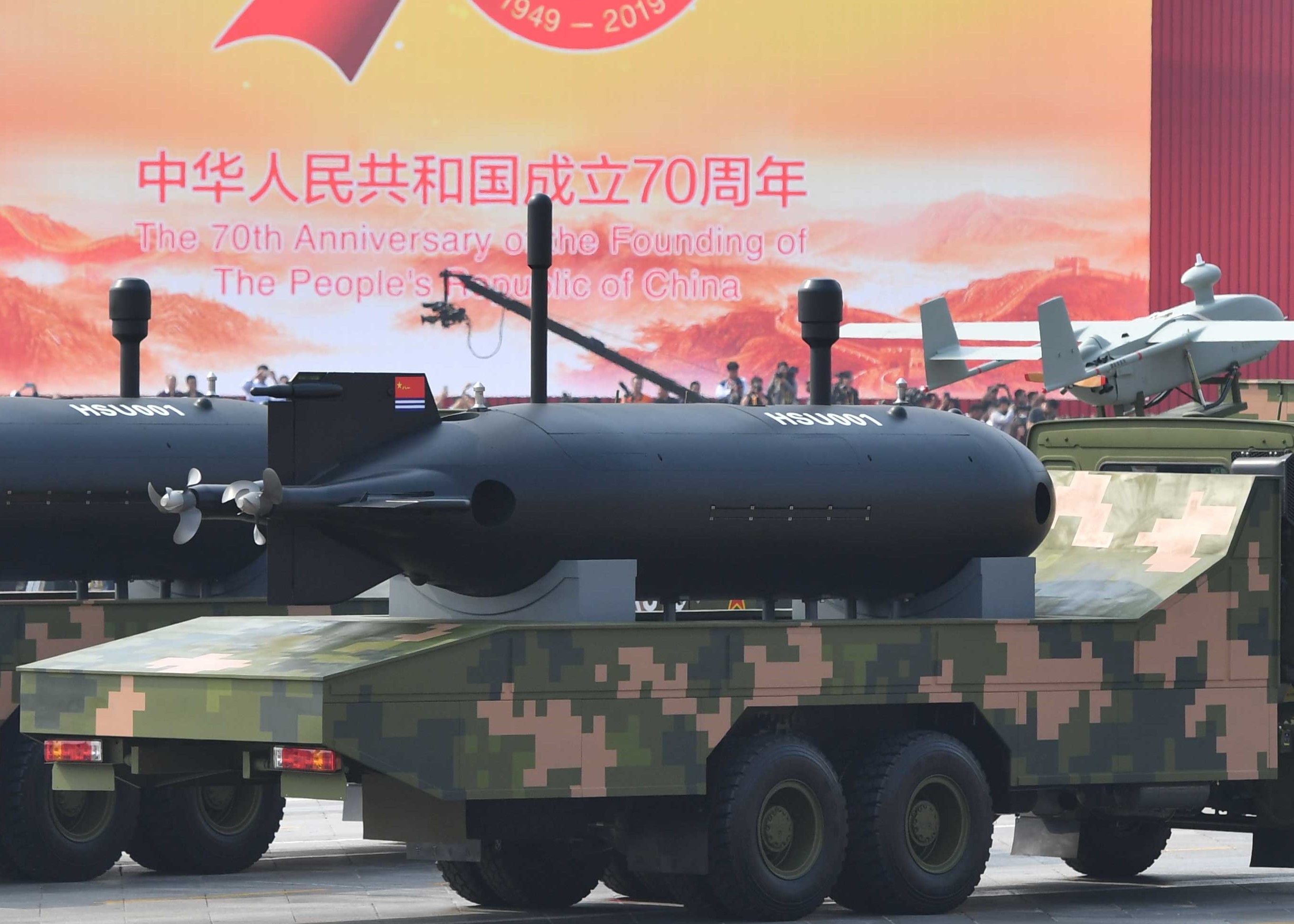 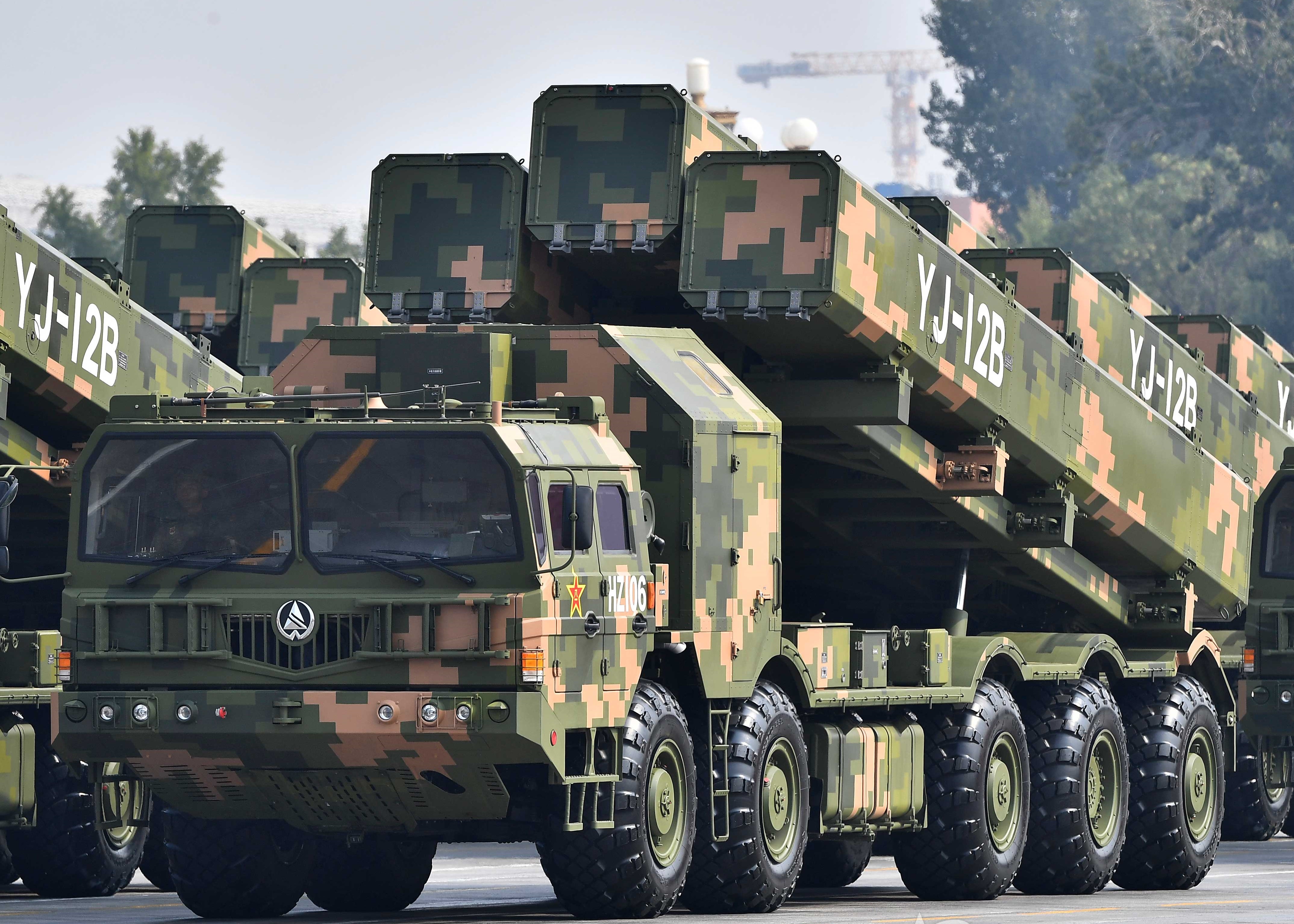 First revealed in 2015, the YJ-12 is a ramjet-propelled supersonic anti-ship missile with an estimated range of 500 km.xv The parade marks the first public appearance of the YJ-12B, a ground-launched variant of the missile. According to media reports, the YJ-12B has already entered Chinese service. 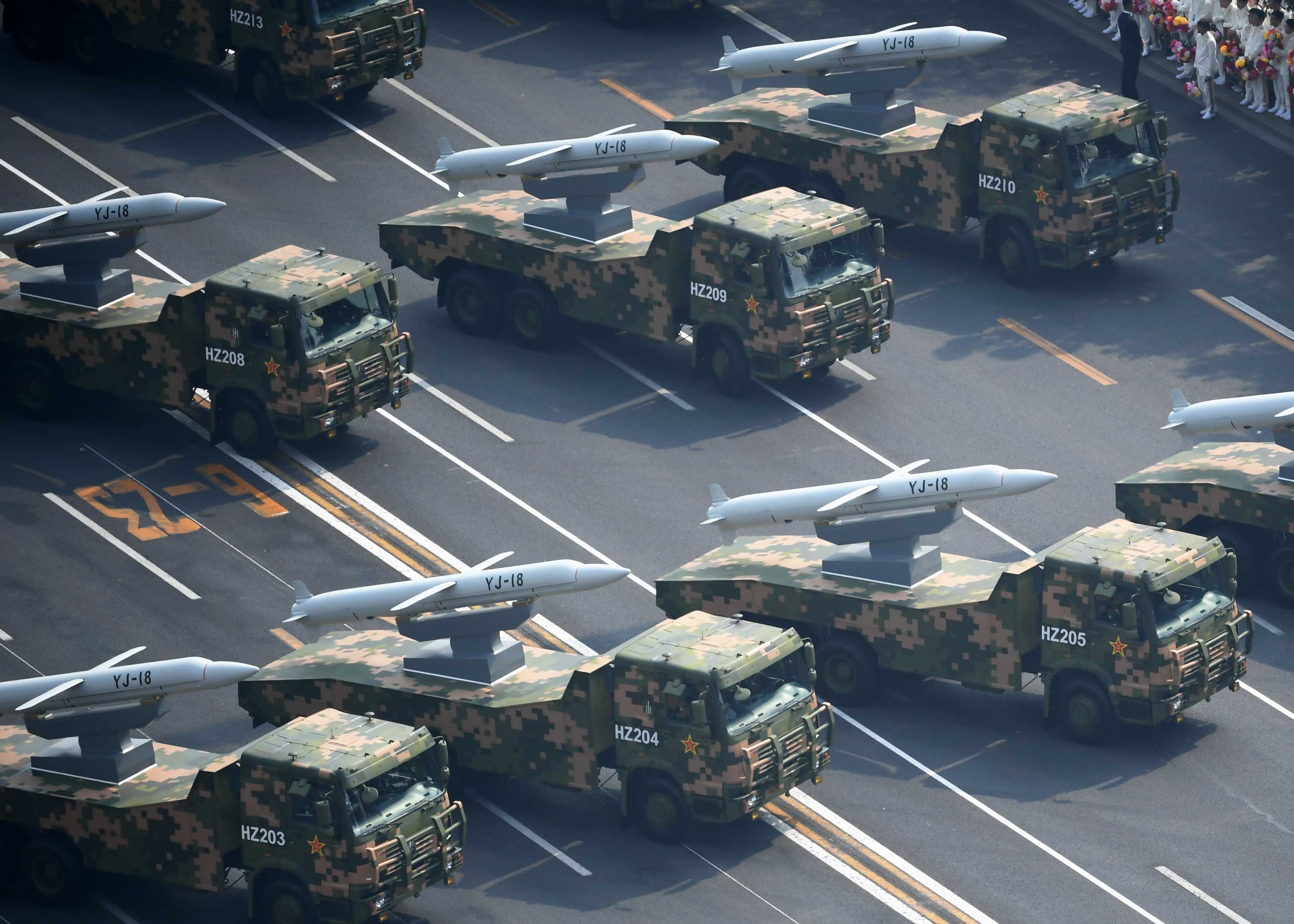 The YJ-18, meanwhile, is a subsonic anti-ship missile with an estimated range between 220 and 540 km.xvi After cruising to the target under turbojet propulsion, the YJ-18 releases a rocket-propelled warhead which accelerates to supersonic velocities. Bearing an external resemblance to Russia’s 3M54TE cruise missile, the YJ-18 had been known but not publicly showcased prior to the parade.xvii 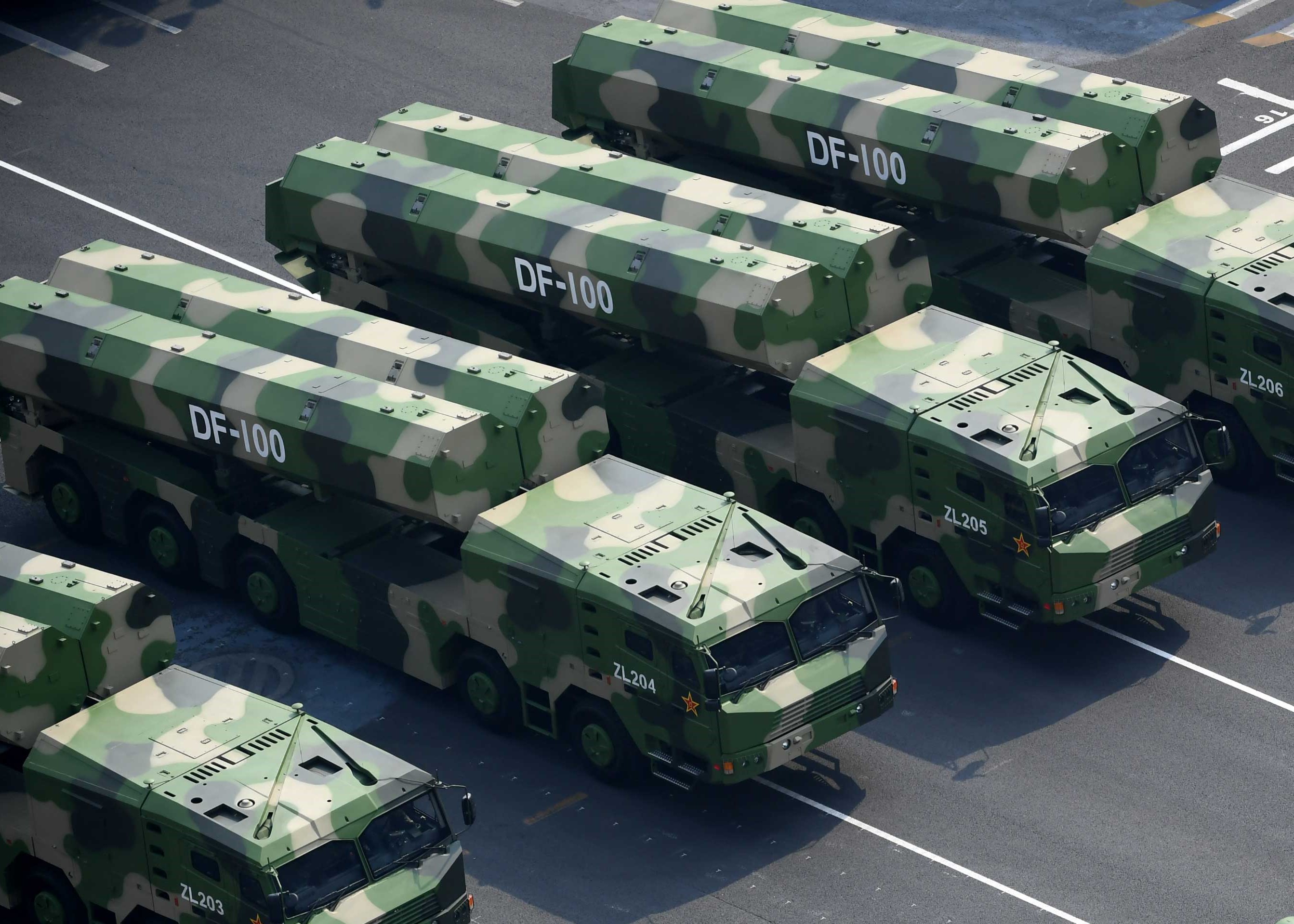 Unknown to the public before the National Day celebration, the CJ-100 is most likely a long-range, supersonic cruise missile.xviii Footage revealed days before the parade indicates that the missile is vertically launched and uses ramjet propulsion.xix Little else is publicly known about it. 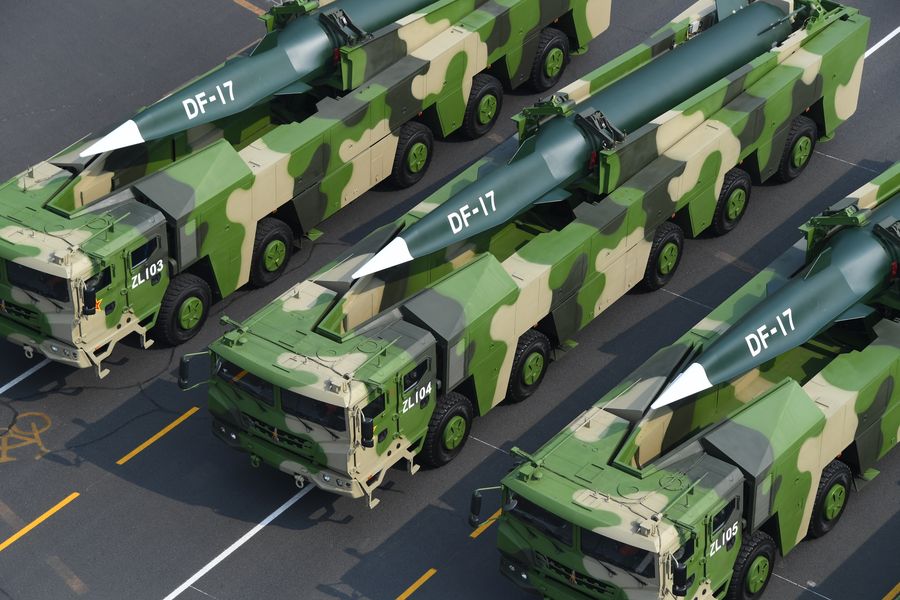 The DF-17, a “short to medium-range” ballistic missile, combines a DF-15-like rocket booster with a hypersonic boost-glide vehicle.xx First tested in January 2014, the missile had not been publicly displayed until the October 1 parade.xxi Public photographs of a similar hypersonic test article—the WU-14/DF-ZF—first surfaced in late 2017.xxii

According to Chinese state media, the DF-17 is intended to defeat U.S. and allied missile defenses, which struggle to engage low-flying, maneuvering threats. Unlike traditional ballistic missiles, hypersonic glide vehicles can modify their trajectory through most of their flight, creating uncertainty over where to commit defensive interceptors. This, however, makes boost-glide vehicles vulnerable to point defenses. Traveling at slower velocities than their ballistic counterparts, hypersonic glide vehicles retain less energy to spend on evasive maneuvers in terminal flight.xxiii 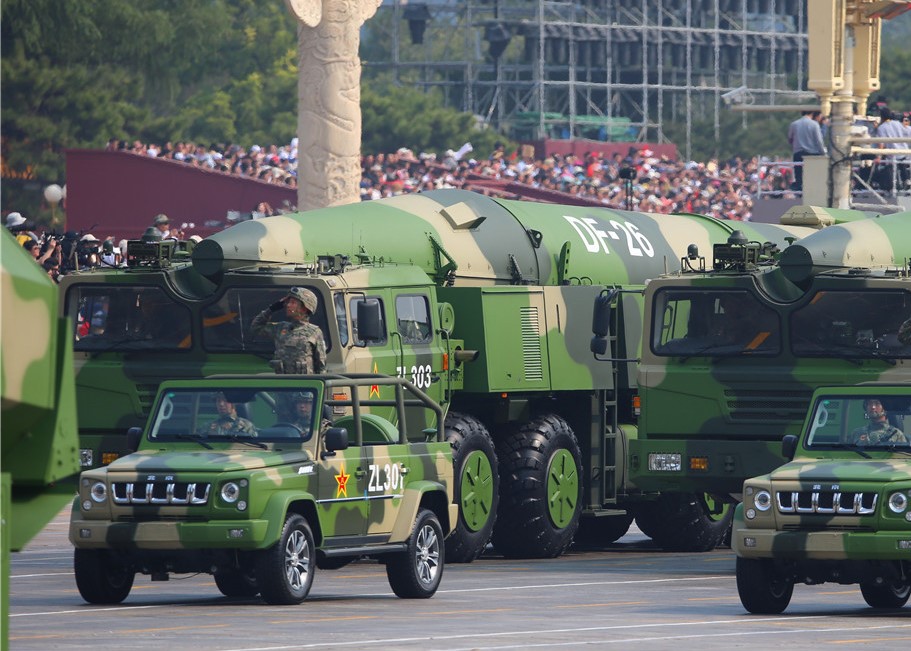 First unveiled in 2015, the DF-26 is an intermediate-range ballistic missile (IRBM) with a 4,000 km range.xxiv The missile can carry a variety of nuclear and conventional payloads and is typically seen with a maneuvering warhead.xxv Such a payload may aid in penetrating terminal missile defenses or striking mobile targets. According to Chinese media sources, China’s defense industry began developing the missile as early as 2008.xxvi China first tested the DF-26 in 2016, conducting its latest flight test in January 2019.xxvii China reportedly tested a rumored anti-ship variant, the DF-26B, in 2017.xxviii To successfully strike a moving target like a ship with a ballistic missile, however, would likely require an ISR asset providing near-real-time targeting information, most likely an unmanned aerial system. 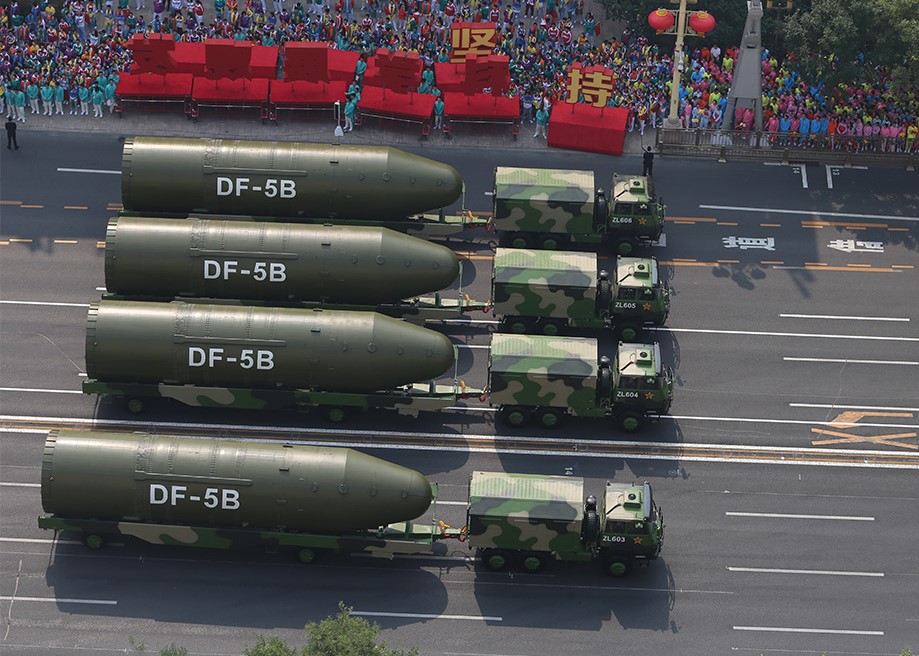 During the parade, China also displayed an upgraded variant of the DF-5, its oldest ICBM.xxix Designated the DF-5B, the missile entered service in 2015 and is the first variant of the 1970s-era DF-5 to carry multiple independently-targeted reentry vehicles (MIRV). Unlike China’s newer missiles, the DF-5B is silo-based and takes a considerable time to move or fire.

Despite analysts’ expectations, China did not showcase the DF-5C, a modernized DF-5 variant with a 10-MIRV payload.xxx Beijing may have tested the DF-5C as recently as 2017.xxxi Such an absence may reflect China’s emphasis on procuring new technologies; while the DF-5C test served to signal China’s resolve and demonstrate its ability to miniaturize nuclear warheads, China may not intend to further develop the DF-5 platform.xxxii Though the “old-fashioned” DF-5-series remains a core element of China’s current force, its underlying technology has become nearly obsolete.xxxiii 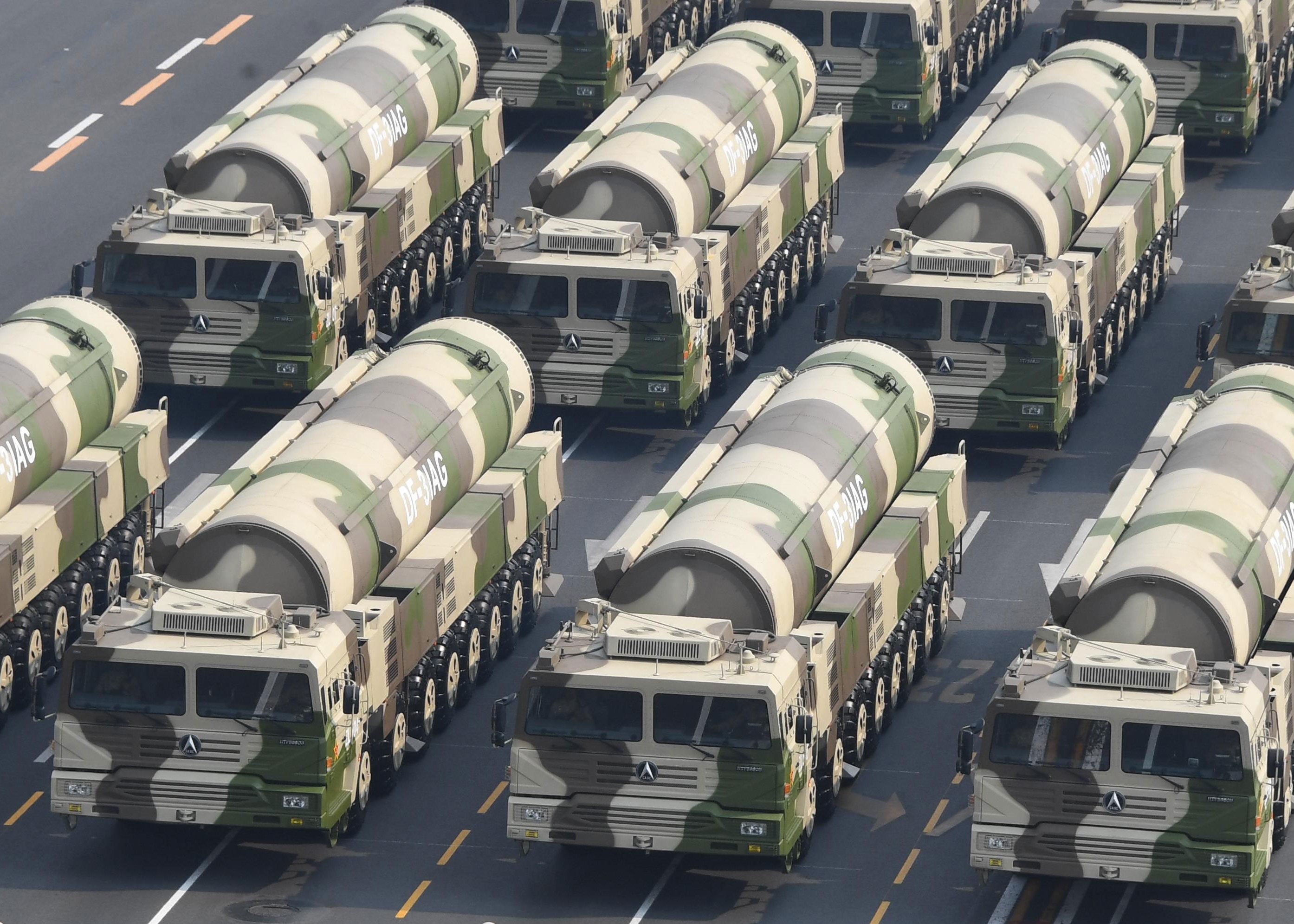 Beijing’s inclusion of DF-31AG missiles in the parade reflects its focus on modernizing its nuclear forces. The DF-31 is a solid-fueled ICBM which entered Chinese service in 2006.xxxiv An upgraded variant, the DF-31A, possesses a range of up to 11,700 km and is fitted with a 1-3 megaton nuclear warhead. First displayed in mid-2017, the DF-31AG is the latest upgrade of the DF-31A, equipped with a ruggedized launch vehicle for traversing unpaved terrain.xxxv No longer limited to China’s roads, the DF-31AG could disperse to more remote areas, making it difficult to target. 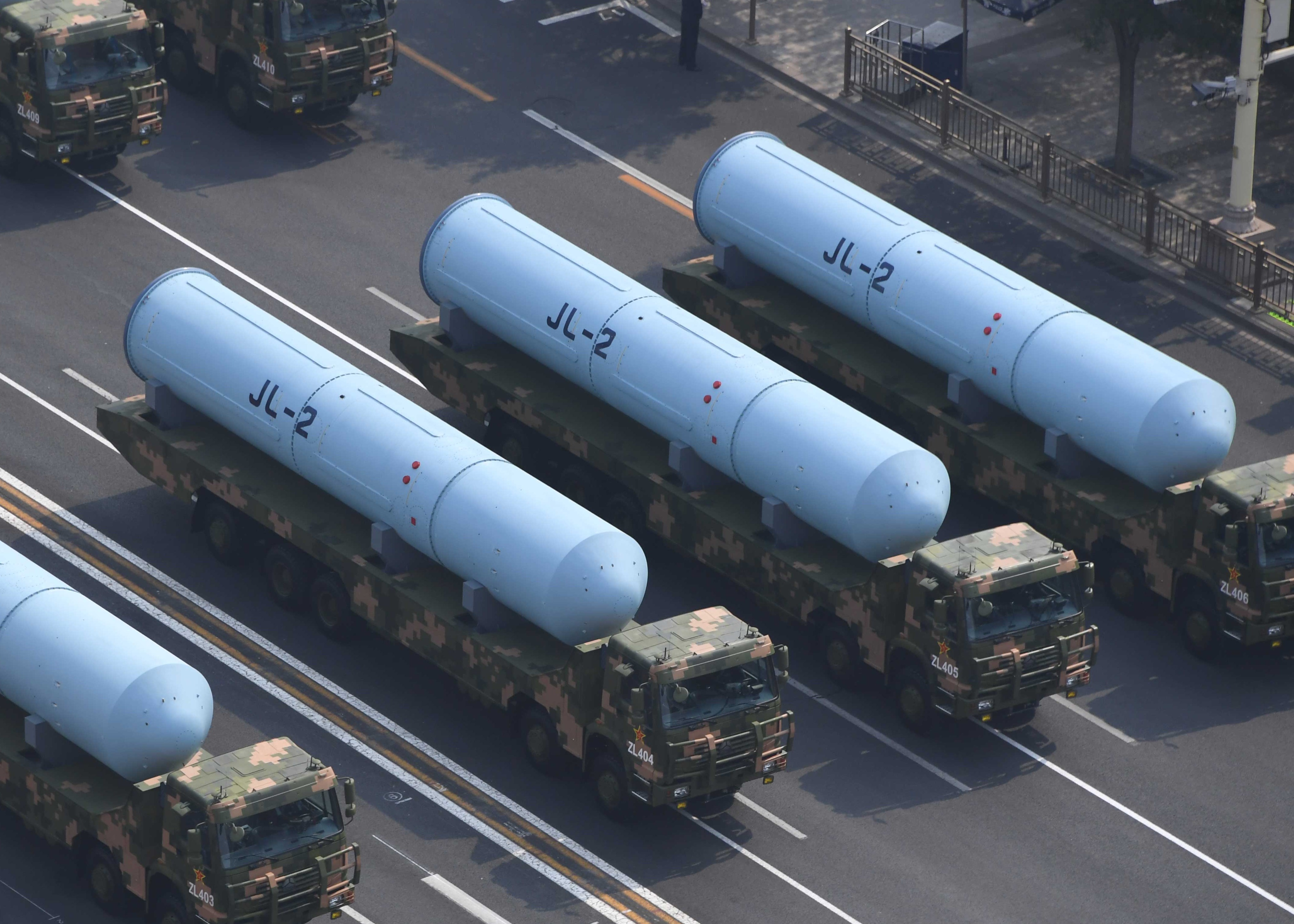 The National Day Parade also marked the first public appearance of the JL-2, a submarine-launched ballistic missile which underwent a troubled development period from 1983 to 2015.xxxvi This public display—combined with repeated declarations of the missile’s maturity—reflect Beijing’s growing confidence in its sea-based deterrent. Derived from the DF-31, the JL-2 reportedly possesses a maximum range of over 8,000 km and may be MIRV-capable. 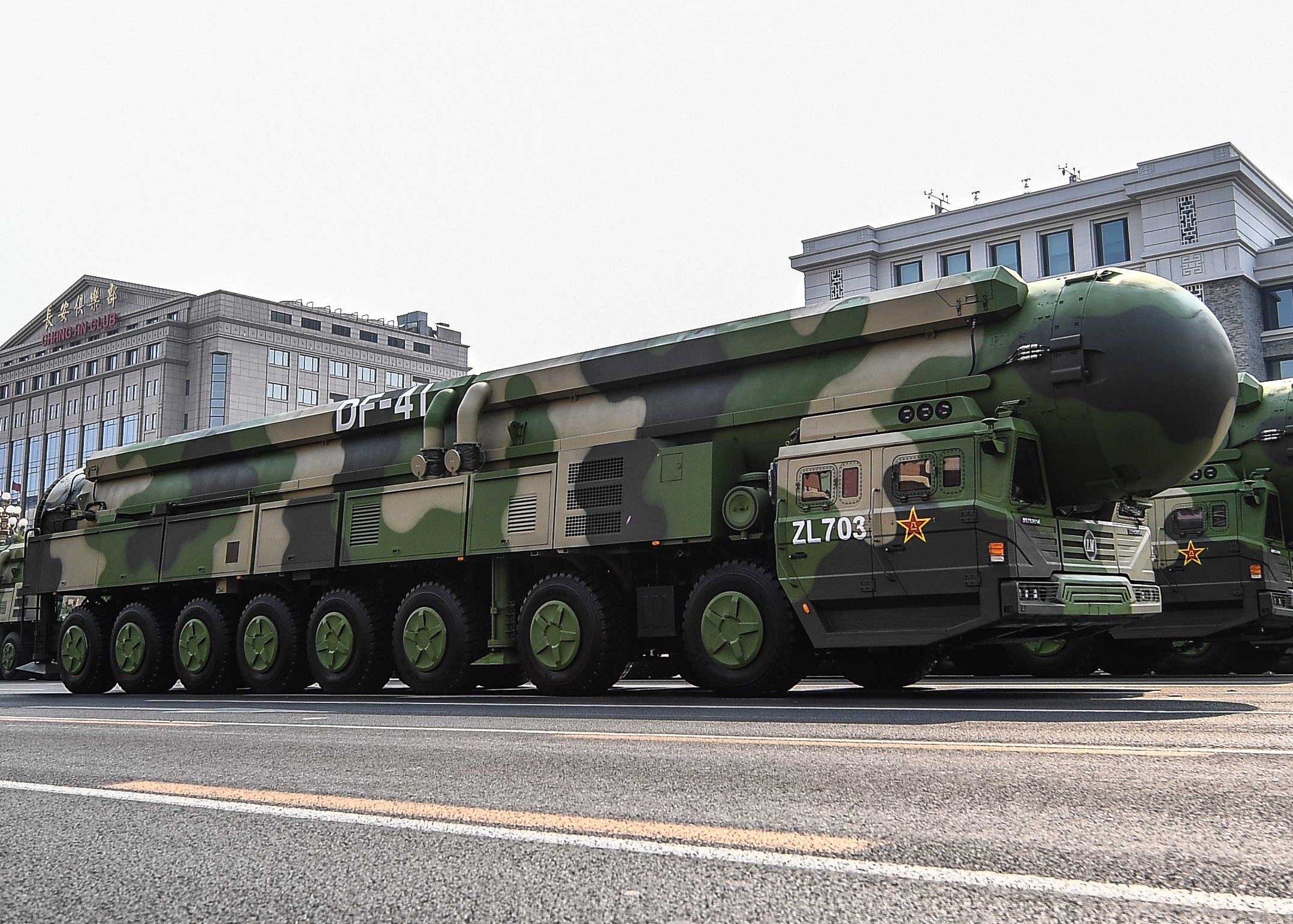 The DF-41 ICBM represents the culmination of China’s strategic modernization efforts, occupying the final position in the 70th anniversary procession. While the missile’s existence was reported by the Pentagon since 1997, no complete images of the system became available until two missile brigades—armed with eight missiles each, appeared at the National Day parade.xxxvii The future “mainstay” of China’s nuclear forces, the road-mobile DF-41 reportedly possesses an operational range of 15,000 km and is MIRV-capable.xxxviii The missile will likely share key technologies with the JL-3, China’s next-generation SLBM.

Through its parade, China has offered the clearest indication of its vision for future warfare. Jammer-equipped aircraft, trucks, and ships will blind U.S. sensors. A networked complex of drones, radars, and satellites will feed vital targeting information to China’s missile forces. And future hypersonic weapons, flying fast and low, will evade U.S. missile defenses.

Offsetting China’s growing capabilities calls for investment into more than just comparable technologies. It will require swift evolution of defensive measures like hardened datalinks and air and missile defenses. Furthermore, maintaining U.S. military advantages will require a nimbler defense acquisition process that can match the pace of China’s rapid development and fielding. Maintaining strong alliances in the Asia Pacific and taking regional leadership militarily and economically will also be crucial. The PRC’s vision of “informationized warfare” may well represent the most advanced military threat that the United States and its allies will face in the twenty-first century. U.S. defense priorities should reflect this gravity. 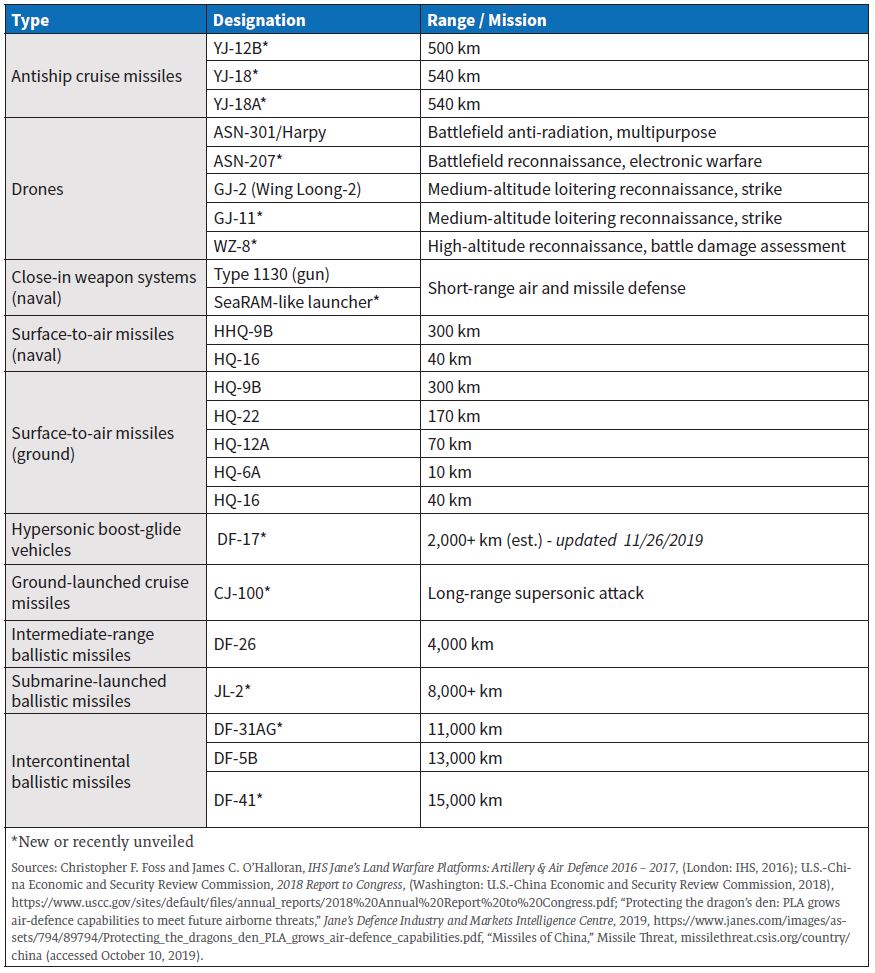 What do we know about North Korea's missiles?
DW | Wesley Rahn
January 9, 2022
In the News 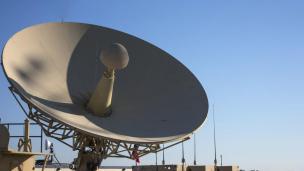 Eyes Everywhere: Intelligence and Strategic Decisionmaking in the Gray Zone
By Ian Williams
November 23, 2021
In the News

Hypersonic warfare: how China is edging ahead in the race for the fastest missile
The Times | Michael Evans
October 22, 2021
View all content by this expert