This past weekend, North Korea conducted a major military parade, an annual affair to commemorate the birth of Kim Il-sung. The event included the conspicuous display of many missiles and artillery pieces, which together demonstrate the nation’s firm intent to develop new and longer-range capabilities, as well as its overall reliance upon such military forces.

The display comes amidst increased tension, manifested both by words and action. Some signs point to a potential seventh nuclear test on the peninsula. Prime Minister Shinzo Abe of Japan has recently warned that North Korean missiles could be armed with sarin nerve agent, the same substance used in the recent chemical attacks in Syria. Meanwhile, the United States deployed a carrier battle group to the region, and recent U.S. air and missile strikes in Syria and Afghanistan could be serving a double purpose of communicating to Pyongyang a message of resolve.

The April 15 parade also offers a glimpse into the possible development of North Korean missile programs and included several new or at least previously unseen elements, including two intercontinental ballistic missile (ICBM)–sized missile canisters. Although the contents (if any) of the canisters were not visible, North Korea clearly communicated the ultimate goal of its missile development efforts.

Furthermore, North Korea displayed two other missiles that appear to be significant modifications of previously seen systems, namely an altered KN-08 IRBM/ICBM variant and another short- to medium-range missile, possibly a Scud variant that has been called the KN-17, which may have failed in launch tests on April 5 and 16.

Most of the media attention has thus far been focused on these new and potentially ICBM-class systems rolling down the street. It is perhaps easy to overlook some of the more mundane, but still quite considerable, weapons on display, including an extensive column of artillery, rocket systems, and antiship cruise missiles that should not be ignored.

Also noteworthy was North Korea’s display of air defense capabilities, possibly to send a counter-message to Washington that a preemptive aerial strike against North Korea would be more complex than operating in Afghanistan’s uncontested airspace.

To be sure, much uncertainty surrounds the launchers and rockets riding through the streets of Pyongyang. It is nevertheless clear that North Korea is not standing still with its missile programs and continues to pose an unpredictable and evolving threat in the Asia-Pacific region and to the United States.

Here is quick rundown of what we saw in Pyongyang on Saturday.

The biggest surprise in the parade was the display of two large, ICBM-sized launch containers on transporter erector launchers (TELs). It is unclear, however, whether they were carrying actual missiles or if such missiles are ready for flight testing. One of the containers appeared similar to that of a Chinese DF-31 ICBM and the other similar to the container for Russia’s Topol ICBM. 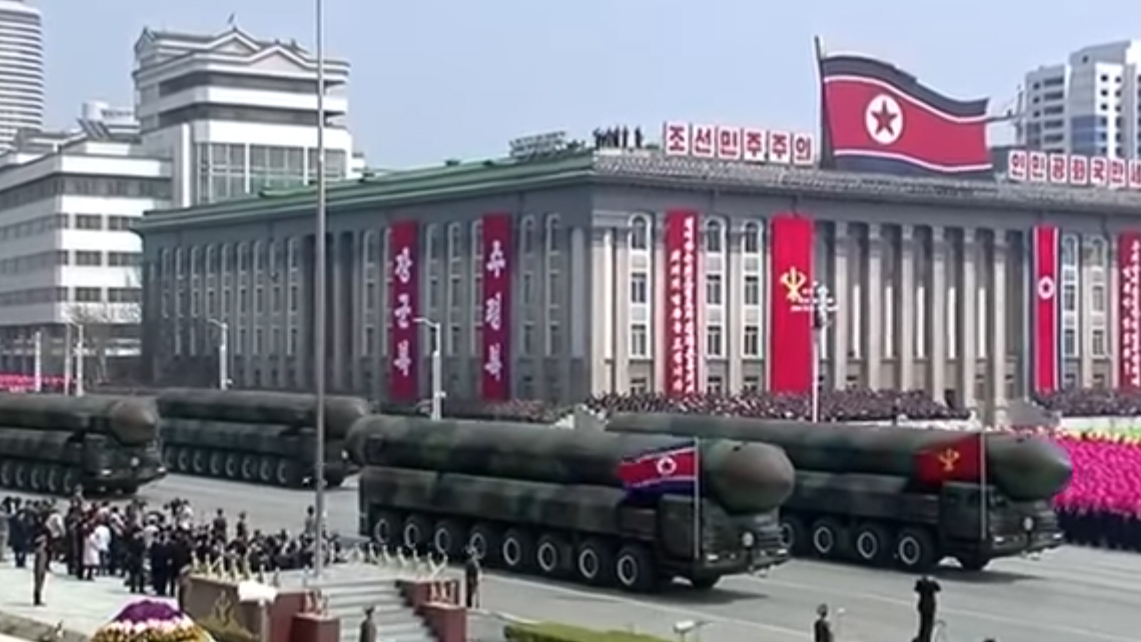 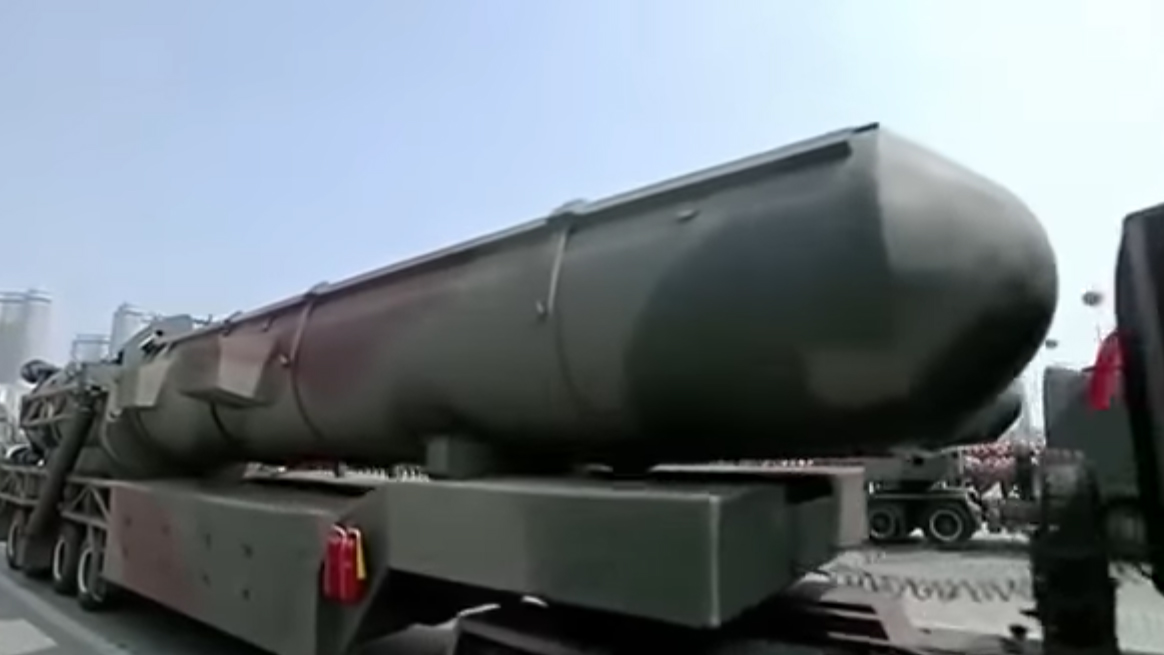 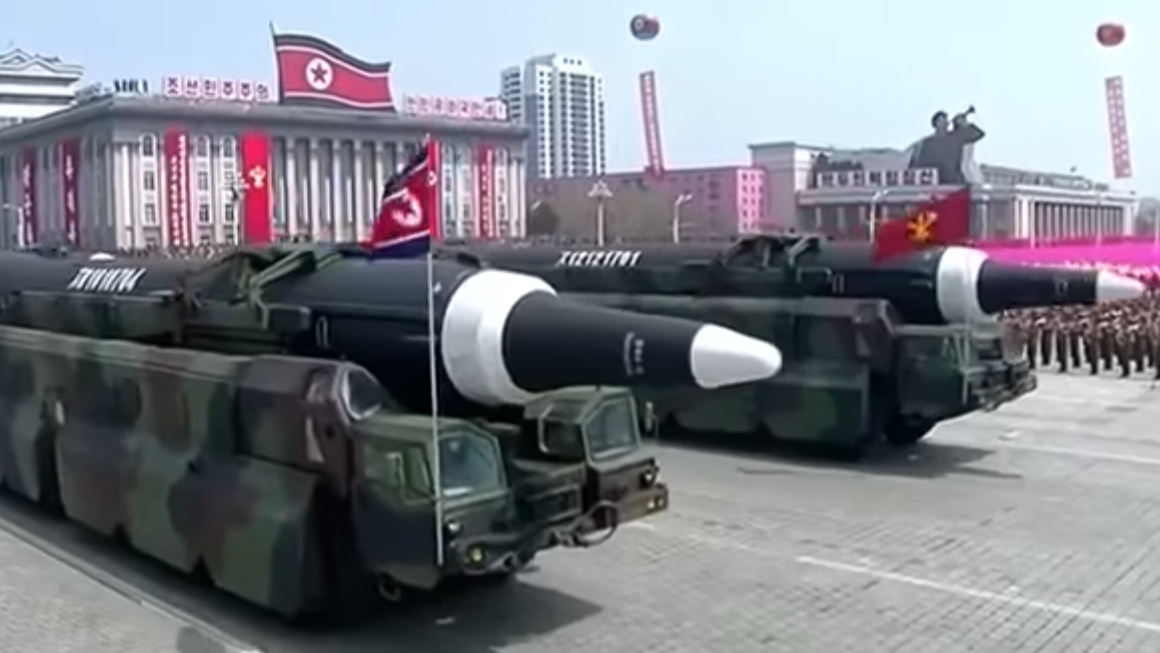 
Another mystery was this missile, which appears similar to North Korea’s previously displayed but apparently still untested KN-08. A three-stage, liquid-fueled ballistic missile, the range of the KN-08 may include the U.S. west coast or possibly further. It was first displayed in a North Korean parade on April 15, 2012. This missile, however, appears to be shorter than the KN-08 and was placed on a launch vehicle normally associated with the Musudan. Missile analysts have floated several theories, including that this could be a two-stage version of the KN-08 or the first two stages of a new ICBM design. 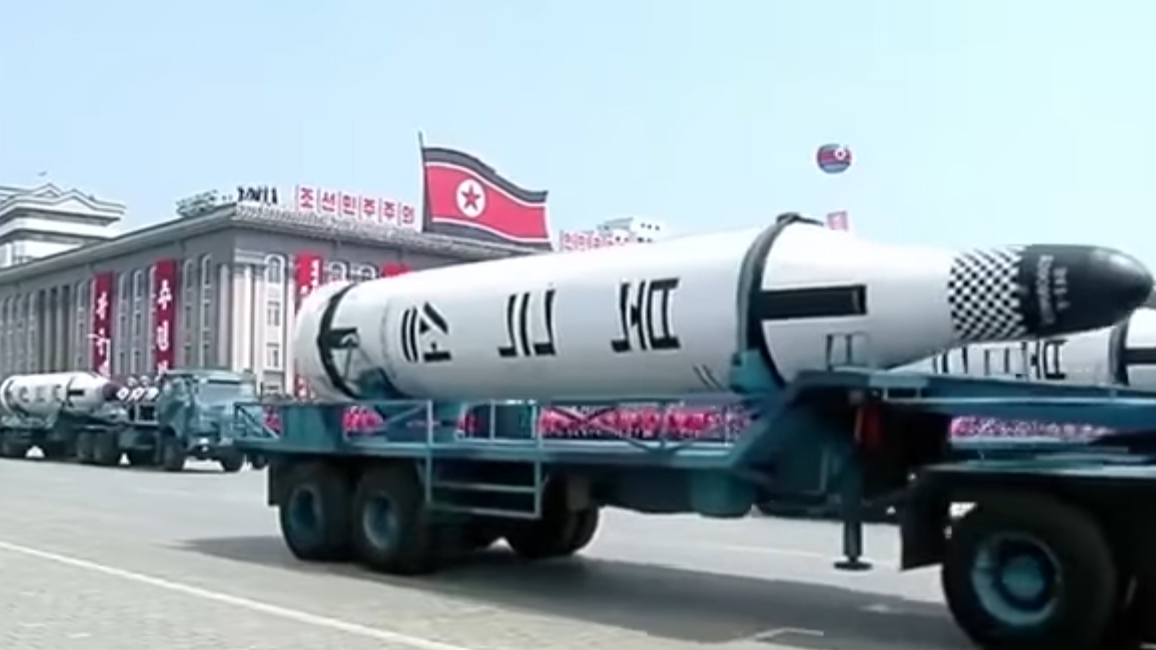 
The KN-11 (Pukkuksong-1) is North Korea’s submarine-launched ballistic missile (SLBM) currently in development. The airframe originally had a liquid-fuel engine, but North Korea changed to a solid-fuel configuration in 2016. Apparently designed to be launched from North Korea’s Gorae-class submarines, the KN-11 had a successful flight in August 2016. 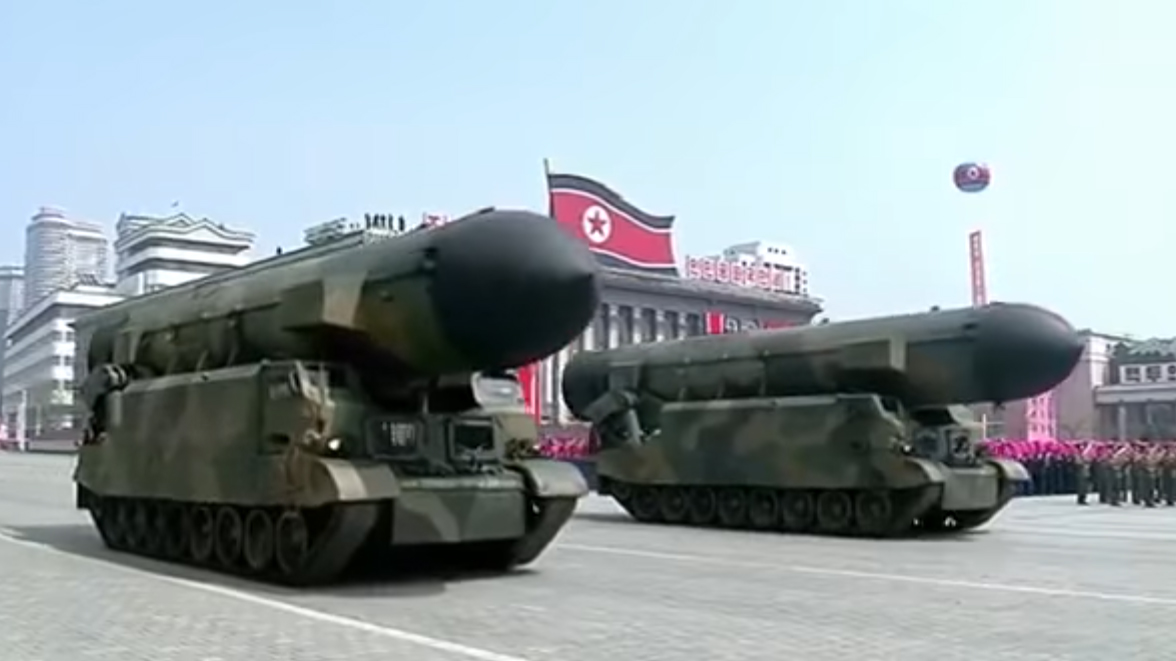 
North Korea’s “KN-11 Ashore,” the KN-15 or Pukkuksong-2, is a land-based version of the solid-fuel KN-11. It is cold-launched from a vehicle-based canister, ejecting in a fashion similar to that from a submarine launch tube. It was first unveiled and successfully flown during a test in February 2017. 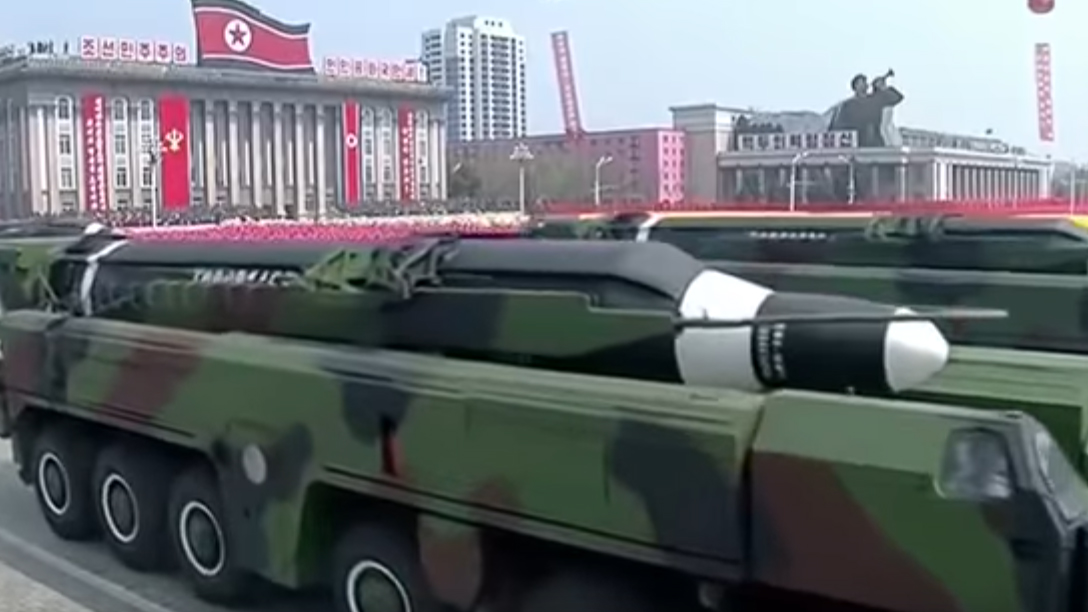 
The Musudan is a liquid-fueled, single-stage, intermediate-range ballistic missile. It is speculated to have a range of 2,500 to 4,000 kilometers (km)—potentially enough to hold U.S. bases in Guam at risk. Its reliability in testing, however, has been low. North Korea tested the Musudan eight times in 2016, but only once did it achieve a successful flight, in June 2016. Its two most recent tests in October 2016 were both failures. The North Korean designation for the missile is Hwasong-10. 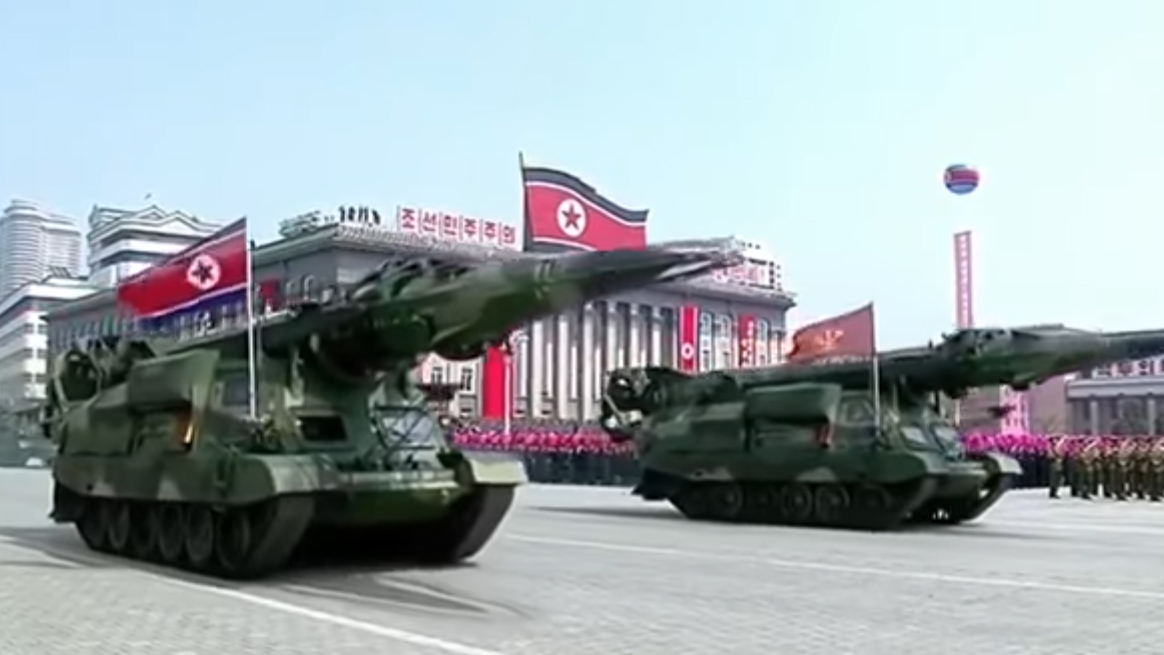 
This missile appears to be a new entry in North Korea’s missile lineup, possibly a version of what is sometimes called its extended-range Scud (Scud-ER), enhanced with better guidance. North Korea launched a salvo of at least four Scud-ERs last month, which fell into the sea just 350 km from Japan’s coastline in an apparent simulated attack on the U.S. military bases in Japan. Known in North Korea as the Hwasong-7, the missile has an estimated range of around 1,000 km.

This missile could also be what the Pentagon recently identified to reporters as the KN-17, a new Scud variant with possible antiship capabilities. Reports suggests that this missile was tested on April 3 and April 16, with both tests apparently ending in failure. 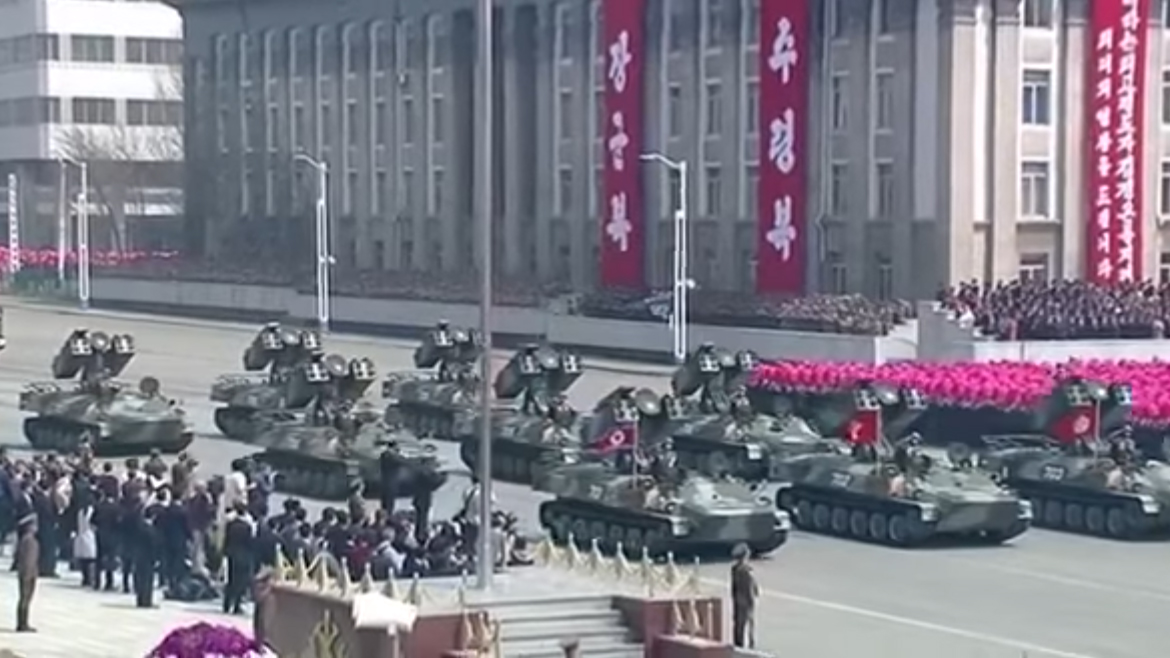 
These Russian-designed, short-range, “shoot and scoot” air defenses (so named to indicate the tactic of moving before they can be targeted) are designed to defeat aircraft up to 5 km away up to an altitude of around 3 km. 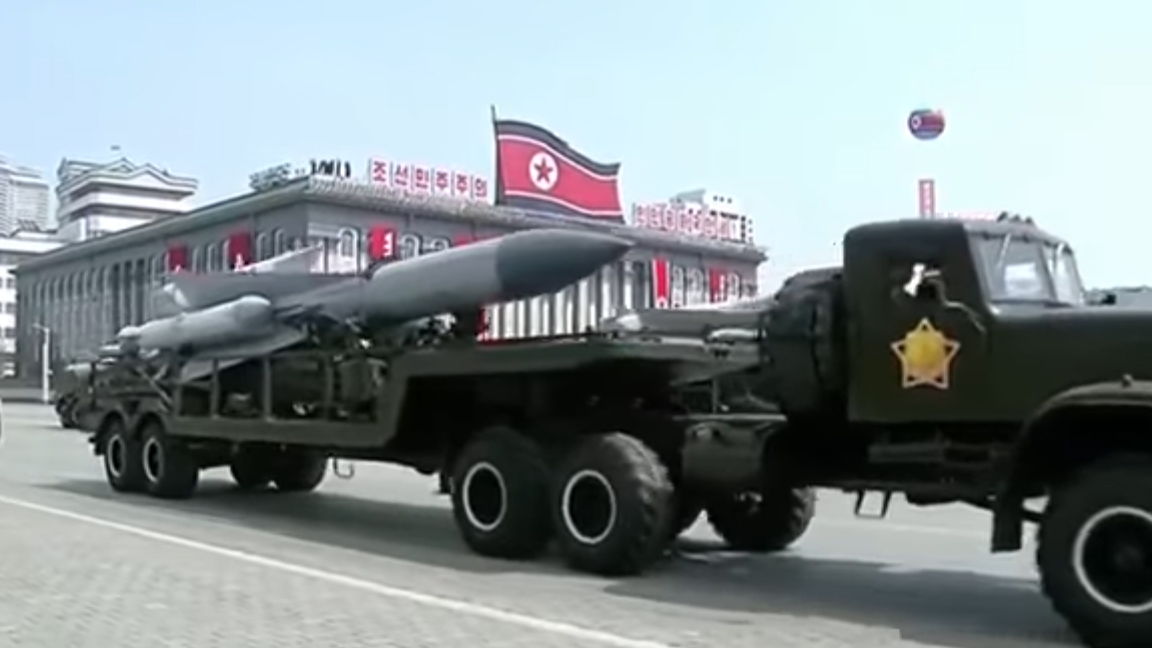 
These Russian-made air defense missiles, first developed in the 1950s, have a range of around 150 km and can reach an altitude of around 20 km. An interesting characteristic of the S-200 design is the solid-fuel strap-on boosters. With limited maneuverability, it poses a serious threat only to larger aircraft such as transport planes. 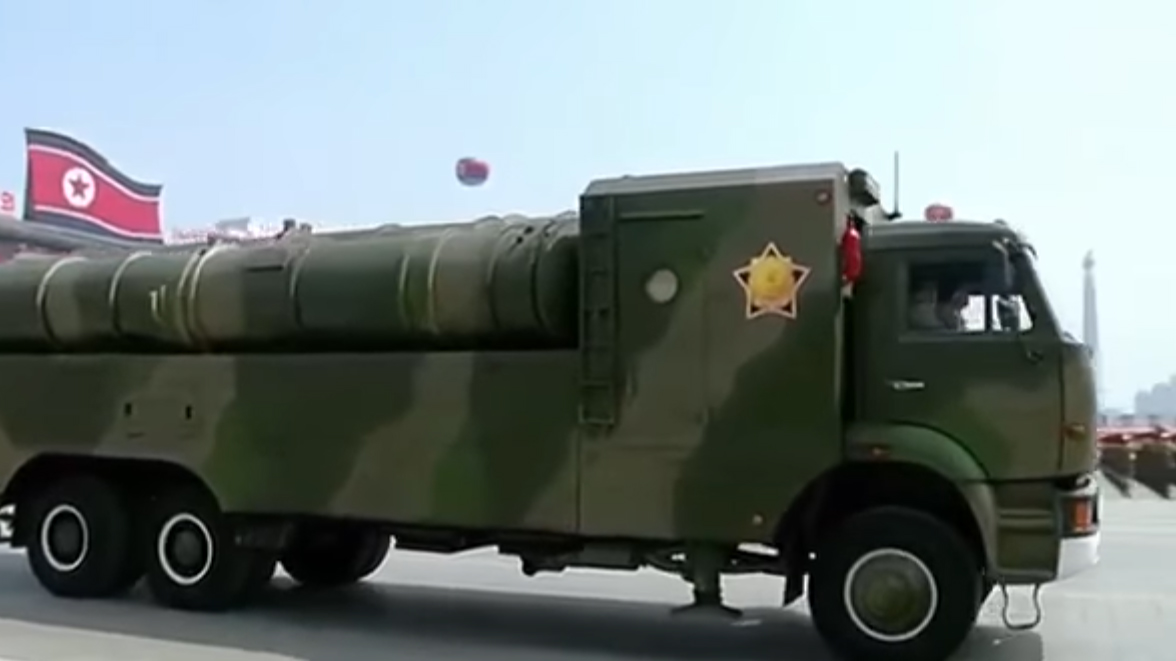 
Possibly North Korea’s most dangerous air defense system, the KN-06 is visually similar to the Russian S-300P and Chinese FT-2000, even if it is unclear how similar they are in capability. First shown on parade in 2010, North Korea released images of an apparent successful test in April 2016. In North Korea’s 2015 military parade, the KN-06 was displayed alongside what appeared to be a phased array radar and other support vehicles. If similar to the Russian S-300P in capability, KN-06 could potentially be capable of attacking airborne targets up to 150 km away. 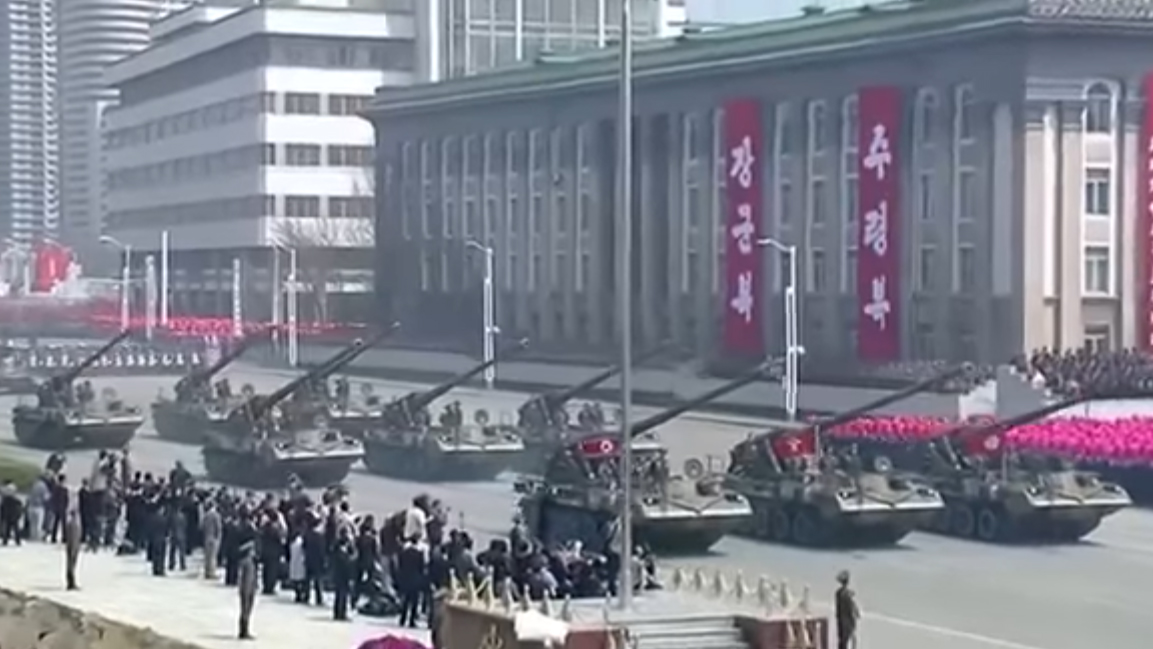 
North Korea’s largest artillery piece, this 170-millimeter (mm) gun has a maximum range of around 60 km, putting Seoul and Incheon well within its reach. 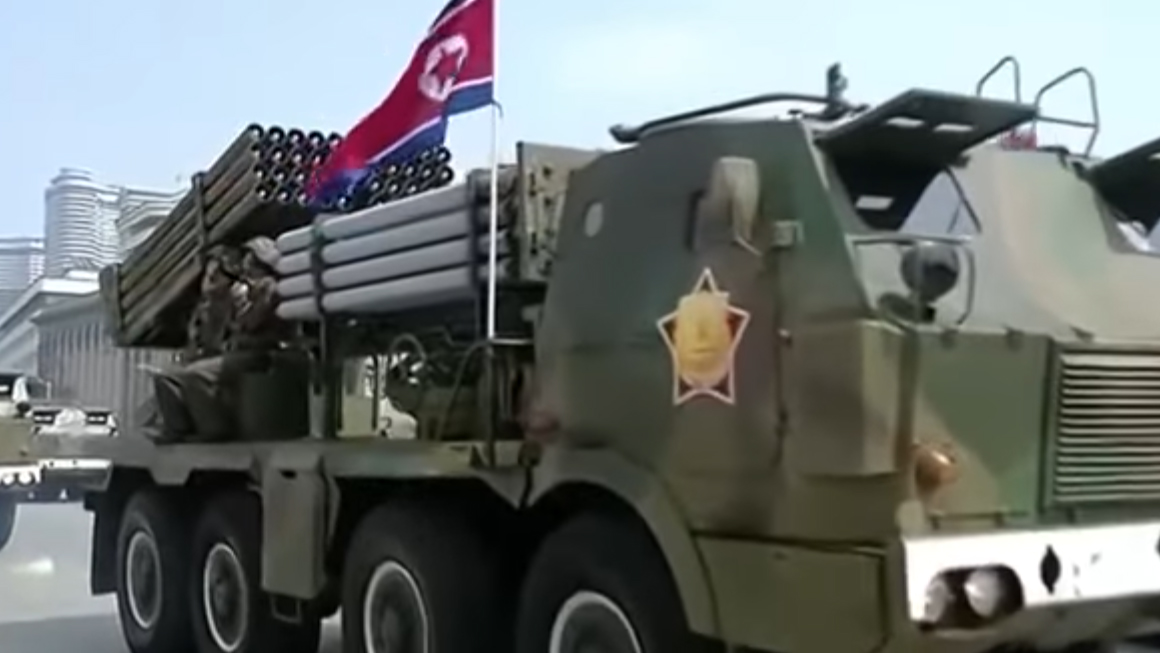 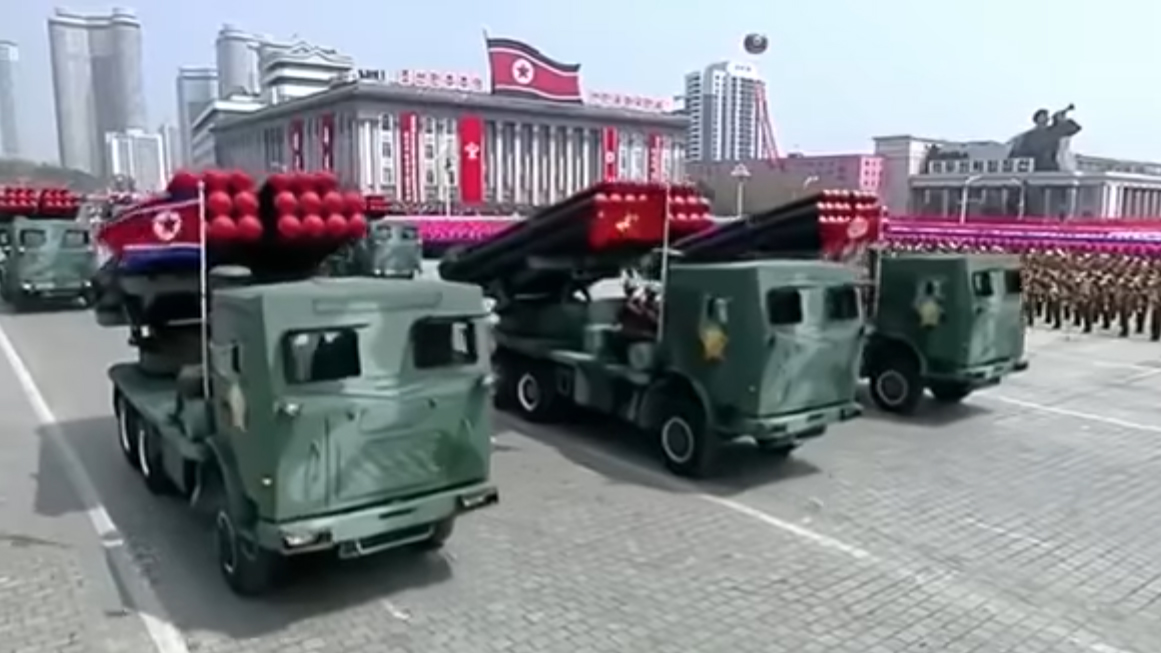 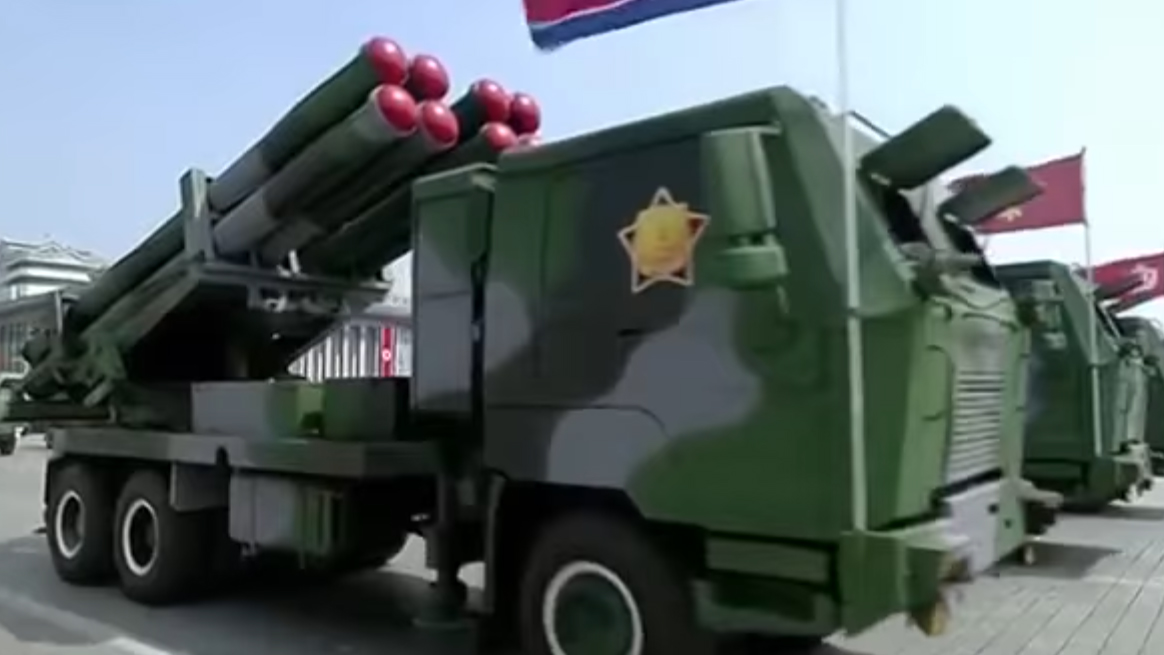 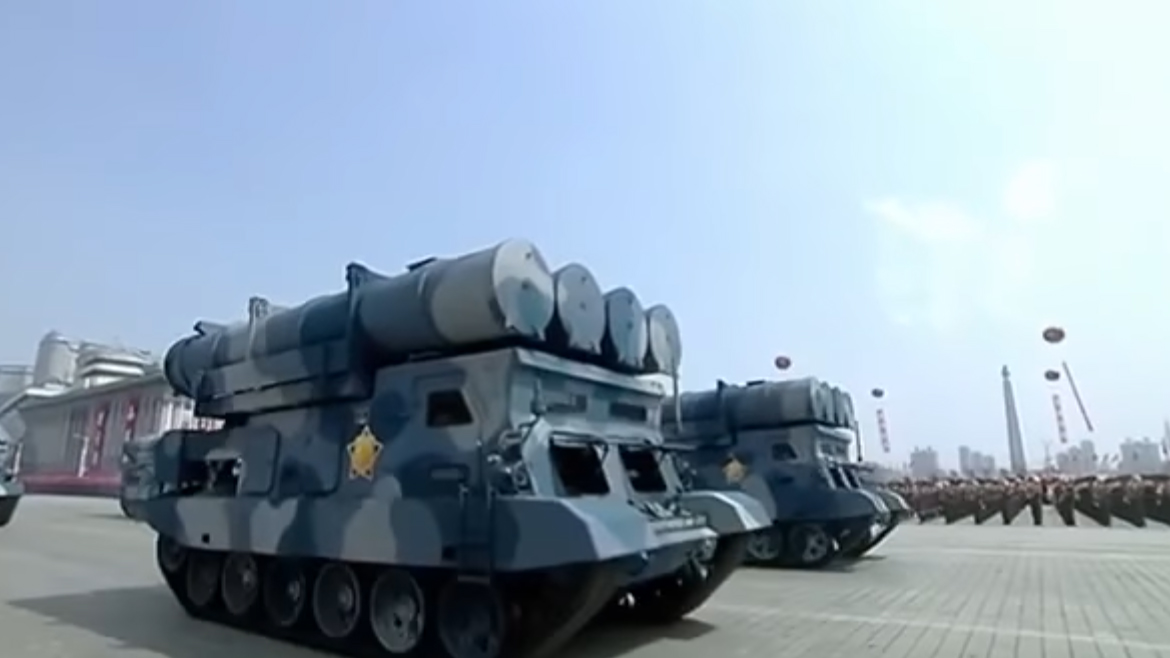 
These canister launch tubes are presumably for North Korea’s newer antiship cruise missiles, which are likely derived from the Russian Kh-35. North Korea released images of a test of this missile in 2015. This system represents an improvement over its older antiship missile, the KN-01, based on the Soviet P-15 Termit and Chinese Silkworm missiles.

What We Did Not See

Notable absences from this year’s red carpet include the No Dong, which North Korea test launched four times last year and is generally considered one of its more reliable liquid-fueled missiles. Also apparently absent were the previously displayed configurations of theKN-08 and KN-14, last seen in 2013 and 2015, respectively. As liquid-fueled missiles are not typically launched from canisters, it seems unlikely that these missiles would be used in the ICBM canisters displayed on Saturday.

This weekend’s parade included several surprises, but they must be taken with several grains of salt. North Korea is well known for displaying missile mock-ups at parades, and little can be discerned until flight testing can be observed. Of its longer-range missiles that have undergone more extensive testing, such as the Musudan, flight test results to date have been mixed, even poor.

Perhaps the most valuable thing that can be gleaned from these pageants, however, is the direction North Korea is taking its missile programs. As demonstrated by recent sea- and land-based launches of the KN-11 and KN-15 missiles, it remains clear that North Korea is tacking hard toward more use of solid fuel. Such a development is concerning, as these missiles are better suited to mobile deployments and can be fired with little preparation or warning. Although the smart money also says that the large ICBM canisters may have been empty, North Korea once again communicated its intent to develop mobile, solid-fuel missiles capable of reaching the United States.

What do we know about North Korea's missiles?
DW | Wesley Rahn
January 9, 2022
In the News

Companies with Arizona presence will be working on prototypes for hypersonic missile defense system
91.5 KJZZ | Mark Brodie
December 16, 2021
View all content by this expert