William Brown is an adjunct professor at the Georgetown University School of Foreign Service and a non-resident fellow at the Korea Economic Institute of America. He is retired from the federal government. The views expressed here are the author’s alone.

It’s not a surprise that last week China and Russia succeeded in watering down the new U.S.-proposed sanctions on North Korea. After all, they have veto power and have long wanted to protect the regime from measures they felt would threaten the stability of the country. But the result is as perplexing as it is disappointing and may indicate a significant shift in their thinking or a lack of discipline. In either case, we need to push to alter their thinking if we want collectively to create an environment conducive to radical change in the way North Korea operates—probably the only way a peaceful solution to the nuclear program, and a stable North Korean society, can be achieved. My partial answer is simple: Convince China to stop giving away crude oil to the North Korean government. Like any other customer, make Pyongyang pay for every drop.

Until this week, Beijing and Moscow tried to take the high road, arguing that sanctions should not hurt the North Korean people and thus should narrowly target entities that are responsible for the nuclear and missile programs. Embargoes on ordinary trade were off the table. Even this week, Moscow said the North Korean people would “eat grass” before giving up their nukes. Well, we might retort, in such a poor country, many of them already eat grass. But the new measures endorsed by both former communist capitals take dead aim at probably the most people- and market-oriented industry in the country, apparel and textiles, and, if enforced, will throw tens of thousands, of ordinary North Koreans out of work or force them back to useless state enterprises. U.S.-proposed sanctions that would have the most direct impact on the regime—not on the people but on crude oil and petroleum products—were essentially zeroed out.

The petroleum issue is a long story, and Beijing’s willingness, finally, to put it on the table, even without accepting significant reductions, is positive. And editorials in Chinese newspapers suggest a change in public sentiment is under way, important in the run-up to the Party Congress this November and the People’s Congress next spring.1 The data though is confused in reporting I have seen, with likely exaggeration on the U.S. part as to how much the supply will be cut. Crude oil, all supplied by China to a small refinery in the northwest corner of the country, is to be continued at the same rate, probably around 500,000 - 600,000 tons per year or 4.4 million barrels.2 But we can’t be sure of the volume since, beginning in January 2014, China has reported zero crude oil exports to North Korea each month in its formal customs data, even though by all indications this flow has continued, probably at its historic rate. By not reporting the trade, Beijing may be trying to hide from its own people the fact that it gives this oil to North Korea under a long term aid contract, likely not a very popular issue. This, by a large margin, is the source of the national oil supply, owned and distributed by North Korean government agencies and the military. And the new sanctions do nothing to change that. In recent years, there has been an increase in purchases of refined products, also mostly from China, which last year, according to Chinese data, was about 2.2 million barrels.3 The new sanctions cut that to 500,000 barrels per quarter, beginning next month, only a 10 percent reduction. And given a sharp drop in North Korean imports in recent months to well below that rate (see graphic), probably due to shortages of foreign exchange, the cap may not be a cap at all. This, in my view, is a lost opportunity to promote real change in North Korea. 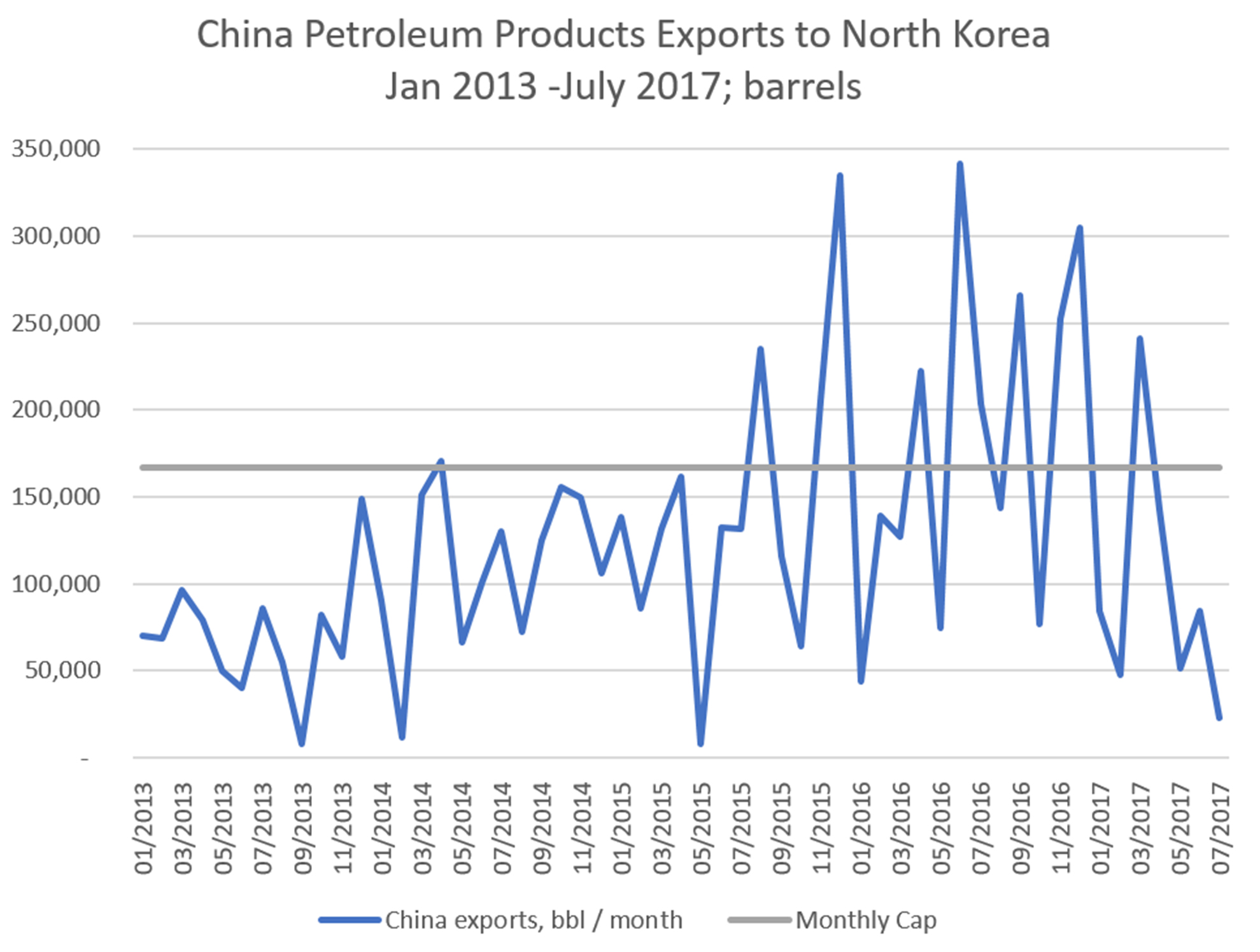 Like textiles, targeting refined products instead of crude oil fits a pattern that hits the people more than the government. Refined products are purchased by licensed North Korean firms using hard currency and sold as gasoline or diesel in the newly flourishing markets allowed by Kim Jong Un. They are probably vitally important to the new taxi businesses, to the distribution of diesel fuel to portable generators that allow people to delink from the broken electrical grid, to the operation of pumps and elevators serving apartment buildings, and to many other market activities. Market data show people are willing to pay high prices for these products given their utility— i.e. a taxi is incredibly more efficient in delivering people and products to a market than is walking or riding a bicycle. And running water is essential in a 40-story apartment building. After rumors of a Chinese crude oil shutoff earlier this year, gasoline prices tripled to the equivalent of more than $6.00 a gallon in Pyongyang, no doubt catching the government’s attention.4

Crude oil, in contrast, is by all indications provided free of charge by the Chinese government based upon an age-old aid agreement probably signed by Mao Ze Dong and Kim Il Song, back when China was an oil exporter, supplied by its super giant Daqing oilfield in Manchuria, not far from North Korea. But China is now a huge net oil importer so the oil given to North Korea comes a the expense of importing it from somewhere else. Even at low July 2017 world prices, the current supply would be worth more than $220 million a year, and if priced at a typical Chinese three-year contract, it would be well over $300 million. The refinery, operated by state agencies and the military, distributes the products within the government according to long-term distribution plans, a key piece of the command economy system. No doubt a small part of this is the kerosene that fuels the very missiles presumably of concern to China and the rest of us. In recent years, with market outlets available, some of these agencies, and even the military, have been selling some of their allocations into the markets, earning valuable hard currency or won, at the much higher black-market rate, and using the funds to import or buy from the domestic markets what they need outside the plan. I can well imagine the atomic energy agency diverts some of its diesel allocation to the markets for hard currency to fund what it needs from abroad. Ironically, if sanctions succeed in reducing refined product imports, their prices will rise and thereby make the oil supplied to the state agencies from the refinery even more valuable.


Hard liners in Beijing apparently have the power to prevent, for now, the stoppage of this crude oil lifeline. They may be right in thinking that without oil, the machinery of the Pyongyang government would freeze up, leading to an economic breakdown and chaos they don’t want to deal with. North Korea is a predominately coal- and hydroelectric-fueled economy, but this means that petroleum products are used only where essential, and cuts from the already small usage would have great impact. Transportation, farming, and the military would all be severely affected. Such conservative people might be convinced, however, especially in the run-up to the November Party Congress, and rising Chinese people’s interest in the North Korea problem, that simply making North Korea pay for oil would not create such dangers. To the contrary, they should know that realistic prices are essential to a reformed economy, distributing products where they are best used. North Korea would still import the oil, probably in about the same quantities, but it would distribute the products differently, more to the people and less to the state. Moreover, the state, in order to buy the crude, would have to import less of something else and prices would likely rise. Like almost every other leader in the world, Kim would then have to worry more about inflation, budgets, and unemployment, and less about missiles and nukes. Even if you are in Beijing or Moscow, what is not to like about that?
[1] Oki Nagai, “Beijing may cut crude oil to Pyongyang, says Chinese expert,” Nikkei Asian Review, April 21, 2017, https://asia.nikkei.com/Spotlight/Pyongyang-provocation/Beijing-may-cut-crude-oil-to-Pyongyang-says-Chinese-expert.
[2] One issue in the statistics is that China reports oil in tons, a weight measure, and the United States and the United Nations use barrels, a volume measure, so the conversion rate changes depending on the product involved. Daqing crude oil is about 7.3 barrels per ton; lighter gasoline is about 8.5 barrels per ton.
[3] There is no evidence of significant other refined product exports to North Korea, although the U.S. government is saying there is another 2 or 3 million barrels. Potential sources could be Singapore, South Korea, and Taiwan, although they all report no such trade. The United States also seems to think this unreported product is susceptible to the cap, meaning that somewhere it is reported.
[4] See William Brown, “Will Gasoline Prices Shake Pyongyang,” Peninsula (blog), May 11, 2017, http://blog.keia.org/2017/05/will-gasoline-prices-shake-pyongyang/.
Photo Credit: FREDERIC J. BROWN/AFP/Getty Images
William Brown
Media Queries
Contact H. Andrew Schwartz
Chief Communications Officer
Tel: 202.775.3242