South Africa’s response to the Covid-19 outbreak has been a standout in the region. President Cyril Ramaphosa has been an effective communicator, speaking frankly to his constituents about challenges ahead. His government moved to close borders and restrict movement and now is gradually adjusting alert levels and policies to ease enforcements in specific cities and communities. Leveraging its experience with HIV/AIDS and tuberculosis, it has deployed mobile testing units and plans to produce 10,000 ventilators. In its earliest stages, the lockdown slowed down the rate of infections—around a 3 percent daily increase—but not without its costs. While crime went down in general, there have been incidents of lootings, especially liquor stores, and more than 17,000 people have been arrested. Even more troubling, there have been allegations of security forces abuse. At least eight police officers are being investigated for deaths related to the lockdown.

A1: President Ramaphosa is wisely borrowing best practices from past responses to heath emergencies in South Africa, including mobilizing the public and private sector, following guidance from the scientific community, and conducting outreach to religious leaders and political opponents.

Q2: What remaining challenges does South Africa face in its response?

A2: South Africa’s principal challenges, aside from capacity shortfalls, are the low trust in the government and deep-seated inequality, hindering its long-term management of the virus. Why does this matter? Trust in government determines the degree to which citizens will comply with Covid-19 public health policies.

According to Afrobarometer, only 33 percent of South Africans say they trust their legislature “a lot” or “somewhat.” Trust in local councilors and police is similarly low (as was trust in Jacob Zuma, Ramaphosa’s predecessor, who was in office at the time of the survey). The low levels of trust reflect a history of an abusive state (during the apartheid era) and disaffection with the ANC in South Africa. It is also a symptom of deep-seated inequality.

As the world’s most unequal country, the top 1 percent of South Africans own 70.9 percent of the country’s wealth. Approximately half of the nation’s population lives in poverty, and many of the poorer households lack access to electricity and water. Although the country has a high number of public hospitals (337 in 2018), and 90 percent of South Africans live within two hours of a health facility, access to health care remains a pressing concern for those in remote rural areas. The country’s apartheid history has contributed to significant access-related racial disparities with black African adults living the farthest distance away from a clinic and lacking the resources to cover travel costs. Despite post-apartheid policies set to reverse and reduce these disparities, the government’s struggles to provide equity in access has left some communities without access to the medical care necessary to combat a serious infection. Two-thirds of South Africa’s 3,300 ventilators are in private hospitals, which the majority of the population cannot afford.

Q3: What additional steps can South Africa take to strengthen its response?

A3: The South African government should focus on increasing transparency and accountability and expanding access to health care services by strengthening the National Health Insurance (NHI) bill.

In April, President Ramaphosa announced a $26 billion fiscal plan that will be funded by borrowing and redirecting money from existing budgets. As the country receives funding from domestic and international lenders, all public money spent on health care and emergency procurement should be published on platforms such as the Open Fiscal Data Package. By making this information accessible to the public, the government will garner the trust of civil society. Transparency and accountability could potentially help reduce corruption and misallocation of donated funds.

As of 2019, only 16 percent of South Africans belong to a medical aid scheme. The government introduced the NHI bill last year to help the country “achieve universal access to quality health care services” by closing the increasing gap between the rich and poor. Although there are valid concerns surrounding increased bureaucracy and the government’s ability to efficiently provide services due to past issues, such as with the state-owned power company Eskom, the pandemic offers a chance at redemption. Challenges in South Africa’s delivery of health services existed before the pandemic but are now out in the open. This is an opportunity to move forward on strengthening the NHI bill and creating supplemental reforms around Covid-19 health care needs. If the government is able to successfully enact the NHI, public sector health care funding would increase at a time when vulnerable groups need it the most. A significant overhaul of the health care system has the potential to streamline health care resources, create a more balanced pool of funds in the system, and improve trust in the long term.

Q4: How can South Africa serve as a model and support the region to curb the disease’s spread?

A4: As African Union chair, President Ramaphosa has significant influence to nudge other governments to mount effective responses to the pandemic. He can engage his peers, pressing Tanzanian president John Magufuli, who claims the “satanic” virus cannot thrive in houses of worship, and Malagasy president Andry Rajoelina, who is proffering an organic remedy, to pursue a science and fact-based approach to combating Covid-19.

Ramaphosa also has the stature to secure economic relief for the region. The World Bank said the virus is driving the continent toward its first recession in 25 years. The international financial institution forecasts that growth will fall sharply from 2.4 percent in 2019 to as much as -5.1 percent in 2020. He already has established a solidarity fund and assembled an all-star team, including Donald Kaberuka, Trevor Manuel, Ngozi Okonjo-Iweala, and Tidjane Thiam, to press the G20, the European Union, and other international financial institutions to deliver “concrete support,” including a stimulus package, to assist the region’s fragile economies. In April, he discussed the region’s plight with President Donald Trump, sharing on Twitter that the United States has agreed to help Africa in its fight against Covid-19. These instances of successful coordination and diplomacy display South Africa’s influence and strength. President Ramaphosa’s position as African Union chair can serve as a crucial megaphone to address the challenges and elevate the opportunities facing the region during this pandemic.

Judd Devermont is director of the Africa Program at the Center for Strategic and International Studies (CSIS) in Washington, D.C. Topaz Mukulu is program coordinator for the CSIS Africa Program. 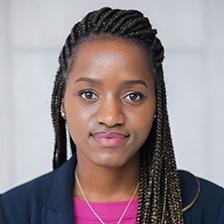 Renewing U.S. Commitment to UN Peacekeeping in Africa
April 14, 2021
View all content by this expert