One eternal element of the debate on trade policy is blame. Bad things are happening in our economy. Is trade responsible for them? Trade skeptics say “yes”—trade promotes a race to the bottom. Free traders say “no”—trade is a scapegoat for a lot of other things that are going on. Of course, where you place blame begins with what you think is wrong. It is probably not correct to blame trade for climate change, though no doubt some have tried. Likewise, it is safe to conclude that trade did not cause our problems with Iran, nor will trade cure them.

Instead of blaming trade for big things like that, let’s spend a few minutes looking at something a bit simpler but which is directly related to the growing skepticism about trade—wages. The argument is that trade depresses wages by facilitating ferocious global competition for market share that forces companies to reduce costs ruthlessly in order to survive, including by sending jobs offshore. The victim in that scenario is the average worker whose wages are kept low to keep costs down. Conveniently, thanks to the Pew Research Center, there is recent data that addresses this issue. It shows that over more than 50 years, while paychecks have risen in nominal terms, in constant 2018 dollars they have changed very little. By that measure, the average hourly wage in 1964 was $20.27, and in 2018 it is $22.65. This is an increase of less than 12% over 54 years, which works out to 0.2% per year—not an impressive performance. 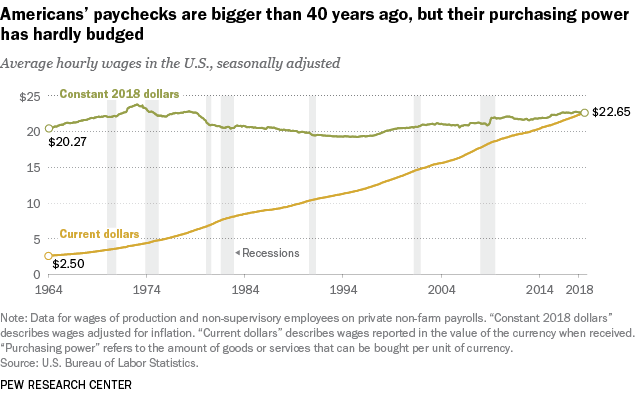 This data, of course, tells what is happening. It does not tell us why it is happening. We are left to figure that out for ourselves. Currently, with the unemployment rate hovering around 4 percent and with manufacturers complaining about growing difficulty in finding workers, one would think wage increases would start to kick in. Instead there appears so far to be only a modest bump. Experts (and non-experts) have offered a variety of explanations for wage stagnation in addition to trade:

There will never be consensus on the causes of wage stagnation, except possibly in the history books 100 years from now, when it won’t do us any good. The correct answer is probably all of the above, along with trade, which cannot be absolved of all blame for the pressures of competing in the global marketplace.

The lesson for policy makers is to remember the Serenity Prayer and figure out the things we can change and focus on them rather than beating our heads against the wall over things we cannot change. Clearly, globalization is in the latter category. We may not like it—the president clearly does not—but it’s here, and it’s not going to go away. (We can discuss the good things it has brought, like out-of-season fruits and vegetables and cool new technologies, another time.) Trying to return to a world where everything is made domestically is unrealistic at best and disastrous at worst, and it will not produce the wage increases the president would like. We would be far better off looking at the items on the list above that we can change and doing something about those.

We Have a China Trade Policy—or Do We?
By William Alan Reinsch
October 12, 2021
Commentary

Pittsburgh is Back!
By William Alan Reinsch
October 4, 2021
In the News 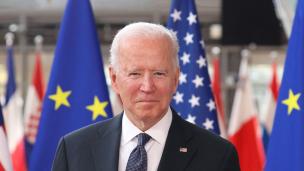 Unforced Errors
By William Alan Reinsch
September 27, 2021
View all content by this expert