The recent news headline said it all: “Pirates kidnap 15 Turkish sailors in attack on container ship” off the Nigerian coast in the Gulf of Guinea. A vast maritime zone of 2.3 million square kilometers and 5700 kilometers of coastline with considerable economic wealth, the Gulf of Guinea has recently been plagued by a succession of acts of piracy, making this maritime space one of the most dangerous and unstable in the world.

While Europe and the United States have been engaged in the region for many years, this deteriorating security situation requires renewed transatlantic engagement. In a context of repeated calls for a renewed partnership between Washington and Europe, the Gulf of Guinea could be a prime candidate for demonstrating the benefits of transatlantic collaboration.

Encompassing 17 countries from Senegal to Angola, the Gulf of Guinea is richly endowed with vast reserves of hydrocarbon, mineral (diamond, tin and cobalt), and fisheries resources, making it a strategic area. While not a major international shipping route, the Gulf of Guinea represents 25 percent of African maritime traffic and has nearly 20 commercial seaports. 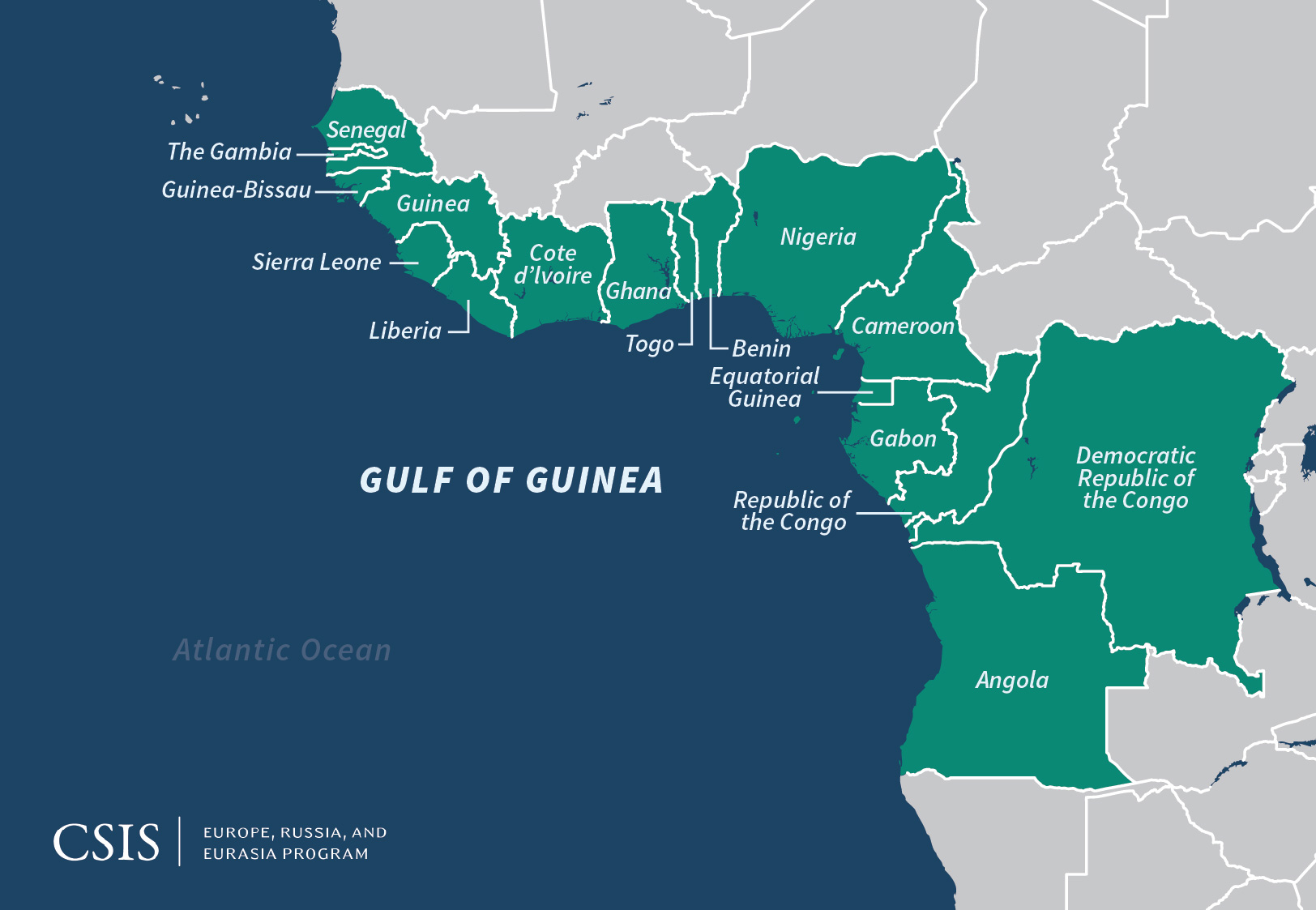 With 60 percent of Africa's oil production, the Gulf of Guinea is home to 4.5 percent of the world's proven oil reserves and 2.7 percent of proven natural gas reserves. Two-thirds of these reserves are concentrated within the exclusive economic zone of Nigeria, the center of gravity of the region, whose oil sector accounts for 75 percent of the state's revenue and 90 percent of total exports. The Gulf of Guinea also has one of the world's richest fishing grounds and represents almost 4 percent of global fish production. The fisheries sector is a critical source of employment for millions of people. In West Africa alone, up to a quarter of jobs are linked to the fisheries sector.

These resources contribute to the economic dynamism of the region, and its economic potential is expected to increase in the coming years (the region will comprise a quarter of the world's population by 2050). But before it can realize and benefit from this potential, threats to its stability and prosperity must first be addressed.

A Confluence of Threats

The region's maritime affluence has attracted non-state actors, who lack economic opportunities elsewhere, to engage in illicit activity which is fueled by regional corruption, high levels of unemployment, and a lack of good governance.

According to the International Maritime Bureau, the number of kidnappings at sea reported in this region increased by 40 percent between 2019 and 2020, with the Gulf accounting for approximately 95 percent of global kidnappings. The Gulf of Guinea has therefore overtaken the Gulf of Aden and Somalia as the leading global piracy hotspot. In 2019, 111 acts of piracy were counted, compared to 25 in the Indian Ocean. A decline in oil prices and a general shift from hijacking for cargo theft to kidnapping for ransom has occurred in recent years. In 2019, 146 people were kidnapped, compared to 60 in 2017.

Another source of attraction is illegal, unreported, and unregulated (IUU) fishing, which amounts to up to 65 percent of the legally reported catch, the highest level globally. Representing an annual loss of $ 1.5 billion for local governments, this illegal fishing contributes to the scarcity of fishery resources and further accentuates social and economic tensions in the region.

These concerns accentuate the already rampant amount of transnational illicit trafficking found in the Gulf of Guinea. Fuel and crude oil theft and smuggling are major problems in Nigeria, where an estimated 120,000 barrels of crude oil are stolen each day, or nearly 6 percent of Nigeria’s output. Facilitated by porous land borders, corruption, and inadequate maritime security enforcement, illicit trade in drugs, arms, and even persons is also escalating in the region. The Gulf of Guinea has also become a major transit point for transnational drug cartels from Latin America, with roughly 25 to 35 percent of all Andean cocaine consumed in Europe passing through West Africa.

International Cooperation as an Answer

This confluence of threats mobilized the international community in the early 2010s. Under the aegis of the United Nations, 17 riparian countries gathered at the Yaoundé Summit in 2013 and established a new maritime security architecture. Based on regional coordination centers (in Abidjan, Pointe-Noire, and Yaoundé), this architecture seeks to create shared maritime domain awareness among regional states through enhanced information-sharing.

The implementation of this architecture has received particular political and financial support from the international community, starting with the European Union, which has 400,000 nationals in the region and imports 13 percent of its oil consumption from there. Composed of the G7 countries and other like-minded countries and organizations, the G7++ Group of Friends of the Gulf of Guinea has also played a mobilizing role since its inception in 2013.

Given the very limited resources of local navies, particularly in terms of vessels capable of operating on the high seas, the European and American navies have also been directly engaged in the region. Maritime assets are regularly deployed to the Gulf of Guinea, performing various missions ranging from training local navies to anti-piracy operations.

France has a long-standing commitment in the region with pre-positioned forces in Senegal, Ivory Coast, and Gabon, and a permanent presence at sea since the 1990s through “Operation Corymbe.” Deploying one or two ships in the Gulf, the French Navy annually organizes three to four regional exercises, culminating in a major annual exercise called Grand African Navy's Exercise for Maritime Operations (NEMO). The 2020 NEMO exercise brought together 30 ships and aircraft from 14 nations, with the participation of the United States.

Other European countries are also actively engaged in the Gulf of Guinea, due to historical and economic links with the region. Portugal and Spain ensure a significant presence at sea, while other countries, such as Italy, the United Kingdom, or Belgium occasionally deploy their navies. Given the importance of its shipping industry (which is responsible for more than 10 percent of the global transport), Denmark is also increasingly engaged in the region, notably through capacity-building efforts.

Particularly concerned by the destabilizing impact of maritime insecurity centered on Nigeria, the United States has also maintained a maritime presence under the authority of U.S. Africa Command (AFRICOM), which regularly deploys warships in the region and organizes a major annual exercise called Obangame Express. As co-chair in 2020 of the G7++, Washington plays an active diplomatic role in the region and has provided substantial support bilaterally to local navies.

The Case for a Smarter Transatlantic Cooperation

Regional and international efforts remain insufficient, as witnessed in the most recent, high-visibility piracy attacks. Addressing increased maritime insecurity in the Gulf of Guinea will require stronger transatlantic cooperation, leveraging the deployment of scarce naval assets and countering the increased influence of competitors in the region such as China.

Washington and Europe should build on the achievements of their anti-piracy efforts off the coast of Somalia, which serve as a textbook case for effective multinational coordination, while adapting their strategy to the specificities of the Gulf of Guinea. Compared to the Horn of Africa, piracy attacks in the Gulf of Guinea are occurring mostly in territorial waters and not in an international and ungoverned space, therefore requiring locally owned solutions. Against this backdrop, a transatlantic response should focus on the following objectives.

Complete the Yaoundé security architecture. While the Yaoundé process has made initial progress, this architecture remains incomplete, due to the absence of an appropriate legislative and judicial framework, which makes enforcing the rule of law in the Gulf of Guinea nearly impossible. With the help of the G7++, riparian countries should ensure extradition or mutual legal assistance while closing existing law enforcement loopholes exploited by savvy criminals to evade prosecution. Members of the G7++ should also work towards a broader vision of maritime stability, notably by orienting part of their assistance to address the endemic problems of corruption, weak rule of law, and economic and social exclusion.

Strengthen jointly the capacity of local navies. Persistent instability in the Gulf of Guinea also hinges on the limited capacities of local navies or coast guards which are under-equipped to provide a credible deterrence, especially beyond their territorial waters. The United States and Europeans would benefit from greater coordination of their efforts to train and provide equipment to local navies, whether vessels or maritime surveillance platforms (e.g., radar, drones). Greater alignment between Washington and Europe will serve as a counter to China’s increased capacity-building assistance in the region. Beijing has delivered modern patrol boats and vessels to Gulf of Guinea navies, substantially strengthening its influence in the region.

Establish a coordinated maritime presence. Finally, the United States and Europe should ensure better coordination of their deployed navies and coast guards which typically operate in parallel, reducing their impact and leading to repetitive or unnecessary training provisions. Because of their limited naval assets, Europeans have begun to lay the groundwork for a more coherent engagement of their navies under the European Union-led “Coordinated Maritime Presences” initiative. Designed to leverage the presence of European national naval assets through enhanced information-sharing, this mechanism will be first tested in the Gulf of Guinea in close coordination with international and local partners, and will be among the priorities of the Portuguese presidency of the European Union (January–June 2021). This initiative could lay important groundwork for increased cooperation between U.S. and European navies on trainings, planned deployments, or logistical support.

While the Gulf of Guinea may not be at the top of the transatlantic “to-do” list for the Biden administration, the region remains a strategic area whose growing instability has larger global consequences which require sustained international mobilization. The Gulf of Guinea could be an important and early example of a partner-led and U.S. enabled framework where Europe increases its role as a security provider with support from the United States to address a growing security challenge.

Pierre Morcos is a visiting fellow with the Europe, Russia, and Eurasia Program at the Center for Strategic and International Studies (CSIS) in Washington, D.C.

Africa , Europe , Defense and Security , and Geopolitics and International Security