India has witnessed important economic reforms in both of the Modi government’s terms. However, the pace of these reforms has been erratic. As he approaches the end of his second term, Prime Minister Modi has a chance at surpassing the number of major reforms made during his first, but this will require real effort in these coming two years. Additionally, the government has not been very articulate in terms of the types of reforms it plans to undertake to further stimulate growth.

When the Bharatiya Janata Party (BJP) swept to power in 2014, expectations were high that Prime Minister Modi would remake the Indian economy. The CSIS Wadhwani Chair team decided to create a “measuring stick” to see how many big reforms his government could undertake. The team created a “India Reforms Scorecard” using a meticulous multistep process to select 30 significant reforms and track their implementation. These are not reforms the BJP promised to introduce, necessarily. Instead, they are economic reforms that experts believe could trigger job growth—even if some of these reforms appear politically impossible.


Looking at our own India Reforms Scorecard, we see that the Modi government’s reform record in its second term (six reforms) trails that of its first term (eight reforms) at the three-year mark. However, in its first term, the government initiated only a single significant economic reform during its last two in office. Thus, the government has a real opportunity to end on a strong note. 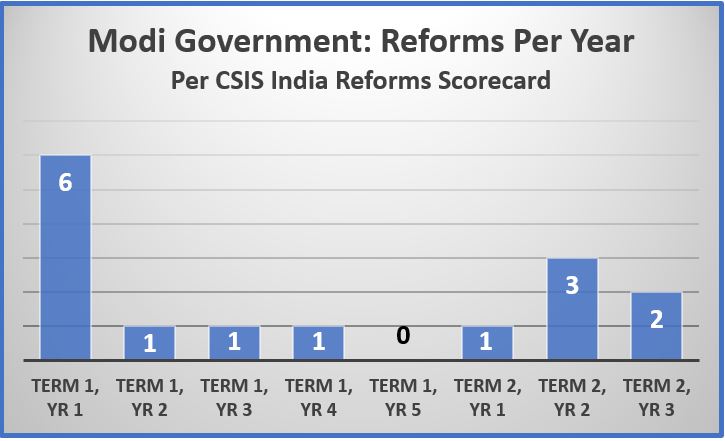 This only looks at the level of “completed” reforms. If we dig in a bit more deeply and also look at “partially-completed” reforms, we see a real pattern of under-performance in the Modi government’s second term. A partial reform means that a reform was undertaken but did not meet all of our criteria for a full reform.

Today, twenty of the reforms on our India Reforms Scorecard await action. Some of these are very politically challenging, such as ending banks “Priority Sector Lending,” and “Place Pricing Control of Electric Power in the Central Government.” But others are relatively simple and straightforward, like better reporting on “Origins and Destinations” of FDI or enforcing “Cost-Benefit Analysis” for proposed regulations.

In less than two years, our team will begin preparing a new “India Reforms Scorecard” for the 2024-2029 period, whoever is in charge. With effort from the current government, few of the reforms on the current Scorecard will make a re-appearance. From the chart above, it is apparent that the Modi government has broken out of the reform lull we saw at the end of its first term and start of its second term. The chance to improve on its reform total is apparent. And the impact on business growth and job-creation could be profound.