Nearly five years after the signing of a peace accord with northern armed groups, Mali finds itself in a complex and deteriorating security crisis. The 2015 Accord—officially the “Agreement for Peace and Reconciliation in Mali Resulting from the Algiers Process,” or simply “the Accord”—has failed to fulfill its promise of “genuine national reconciliation.” Its fundamental challenge? The Accord addresses only a slice of Mali’s instability: it focuses on the 2011-2012 separatist rebellion in the country’s north and has failed—in its original form and subsequent roadmaps—to address mounting Islamist violence, lethal ethnic tension, and persistent insecurity in Mali’s central regions. In addition, the Accord’s signatories and guarantors—namely the Malian government, northern separatist groups, northern armed groups that favor Malian territorial unity, and an Algeria-headed mediation team—lack the political will and buy-in required to implement essential pillars of the Accord, which include political decentralization and the disarmament, demobilization, and reintegration (DDR) of ex-combatants.

Many Malians never accepted the conditions outlined in the Accord and have, unsurprisingly, grown more disillusioned as the framework has failed to curb violence. Armed Islamist and ethnic militias in Mali (which, for the most part, are not signatories to the Accord) killed more civilians in 2019 than in any year since Mali’s civil war began in 2012. Tens of thousands of people have fled their homes, leading to mass internal displacement and widespread hunger in a country where malnutrition was already endemic. Despite these worsening conditions, international stakeholders including the United States, France, and the United Nations reflexively continue to portray implementation of the 2015 Accord as their top policy goal in Mali. In 2019, UN Secretary-General Antonio Guterres warned that the Accord “remains the only valid and viable framework” for the Malian peace process. This commentary outlines seven steps that Malian stakeholders and the international community can take to revamp the Accord and pave a more promising path toward peace.

The Accord, its signatories, and its guarantors have failed the Malian people. The Accord is crumbling due to three interlinked issues: (1) its failure to engage all actors contributing to instability, (2) its limited geographic scope, and (3) limited commitment and political buy-in from its signatories and guarantors.

The Accord excludes key actors involved in the Malian conflict. It almost exclusively engages the central Malian government and the primary northern armed movements—the Coordination of Azawad Movements (CMA) and the pro-unity Platform of Movements or “the Platform”—thereby sidelining key stakeholders such as Islamists, civil society, and women and youth groups. The Accord specifically mentions decentralizing power and engaging local elected officials, though implementation of these efforts has fallen short.

The Accord is a product of its time, hyper-focused on insecurity and separatism in the north of the country, which was the hotspot during the negotiations process. It did not have the foresight to outline security and development implications for Mali’s central regions, and it has failed to adjust to the evolving conflict. Indeed, the Accord’s emphasis on reconciliation only mentions the “Azawad problem,” referring to a would-be state, self-declared by Tuareg-led rebels, encompassing Mali’s northern regions. The Accord and subsequent roadmaps have remained silent on the interethnic conflict in the central regions between the nomadic Fulani (Peuhl) herders and the Dogon and Bambara farmers. While these ethnic tensions have deepened since 2015, the Accord’s lack of strategies to mitigate existing ethnic tensions in the central regions rendered the document deficient from inception. In fact, critics blame the Accord’s sole focus on northern rebels as having incentivized other minority groups to use violence to extract concessions.

The Accord’s inattention to central Mali, which is more densely populated than the north, has proven fatal. Since the signing of the Accord, northern-based jihadist groups have expanded into Mali’s central regions, most notably Mopti and Segou, waging deadly attacks and exploiting grievances among ethnic groups to drive recruitment. In particular, Islamist recruitment of members of the Peuhl and other ethnic communities has contributed to a surge in ethnic tension, prompting the formation of ethnic self-defense groups and contributing to a cycle of retaliatory violence. Some authorities and elites have reportedly backed Dogon ethnic militias to stem the extremists’ expansion. While the Malian government and international community acknowledge that the political and security crisis is no longer limited to the north, they continue to prioritize the northern-focused Accord as the preeminent vehicle for peace. The national government has tried to implement regional reconciliation forums in central Mali, but local communities are generally suspicious of localized peace processes that are not connected to a national strategy and are thus unlikely to participate, among other reasons.

The Accord, which was signed under considerable pressure from Algeria and the international community, has been hobbled by a lack of stakeholder buy-in and political commitment. The Malian government has failed to institute an effective mechanism for monitoring its own commitments to the Accord’s implementation, recording neither the amount of funds allocated to the north nor the nature or location of the projects supposedly being funded. Malian officials’ involvement in corruption has also likely contributed to the government’s lack of implementation. In addition, President Keita continues to reject the idea of ethnic rivalries and loyalties in the country, instead attributing unrest to conflicting lifestyles, e.g., farmer versus herder. And critically, the government has lagged in constitutional reform—failing to adopt the regulatory, legislative, and constitutional measures required to implement the Accord’s key pillars: decentralization and DDR.

The signatory movements (i.e., the northern armed group coalitions) and international guarantors have also displayed a lack of commitment to the Accord. The CMA has repeatedly suspended its participation in the Accord’s Monitoring Committee and has sought to delay the DDR process, withdrawing from DDR meetings without explanation and declining to select members to participate in the process. Renewed animosity, clashes, and infighting underscores the CMA and the Platform’s lack of commitment to the Accord’s explicit rejection of violence. Repeated reports have also noted the northern signatories’ continued engagement in trafficking, corruption, terrorism, and the diversion of humanitarian aid.

Meanwhile, Algeria has been a peripheral player in the Accord and its implementation following the 2017 replacement of its foreign minister, Ramtane Lamamra, the Accord’s key architect, and more recently the 2019 resignation of Algerian president Abdelaziz Bouteflika. At the same time, the Accord’s Monitoring Committee has been bogged down by internal disagreement among mediators over the participation of armed splinter groups.

While stakeholders have failed to implement the 2015 Accord, they have pushed forward ad hoc arrangements outside the bounds of the agreement. In October 2015 and again in 2017, the CMA and the Platform engaged in bottom-up reconciliation separate from the Accord, signing ceasefire deals that have reduced incidents of violence between the groups. In January, France and members of the G5 Sahel group—Mali, Chad, Niger, Burkina Faso, and Mauritania—announced the formation of the “Coalition for the Sahel,” which will focus on counterterrorism and economic development issues in the region. And in February, following years of secret dealmaking with elements of JNIM, the Malian government officially announced that it was negotiating with JNIM to broker a political solution to jihadist violence in northern and central Mali. The numerous peace negotiations and security operations outside the structure of the Accord is a tacit acknowledgement that the Accord simply is not working.

And yet, each roadmap, MINUSMA resolution, political speech, and donor-funded report on Mali calls on signatories to commit to the implementation of the Accord. The UN Security Council’s (UNSC) June 2019 resolution extending MINUSMA’s mandate identifies support for implementation of the 2015 Accord as MINUSMA’s “primary strategic priority.” Malian president Ibrahim Boubacar Keita told the United Nations General Assembly in September 2019 that he “remain[s] particularly committed” to the Accord. And in March 2020, David Hale, U.S. under secretary of state for political affairs, told Congress that the United States’ efforts in Mali are focused on the Accord, “which remains the best mechanism for achieving a peaceful and reconciled Mali.” But sticking to this script is shortsighted at best and dangerous at worst. Continuing to call on stakeholders to implement the Accord—an incomplete, unfocused strategy—may be doing more harm than good. The Malian government and relevant stakeholders need a fresh approach to manage and move past the conflict. Below are seven steps for rethinking the peace framework and designing a more effective political and security solution.

Malian stakeholders and the international community should graduate from the Accord, taking stock of what has not worked, developing an inclusive process, and demanding accountability for achieving realistic targets. Reimagining Mali’s peace framework is simply a recognition that the conflict has outpaced the Accord. Unless stakeholders accept that it is time to adopt a new approach, it will come at a cost to the Malian people, to the region, and to Mali’s foreign partners in Europe and the United States.

Judd Devermont is director of the Africa Program at the Center for Strategic and International Studies (CSIS) in Washington, D.C. Marielle Harris is program manager of the CSIS Africa Program. 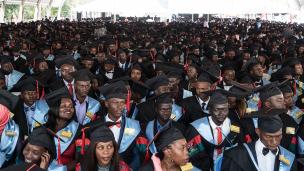