Will the United States Provide Long-Range Rockets to Ukraine?

This week’s controversy is whether the United States should provide long-range rocket systems to Ukraine. Ukrainian officials have been asking for them, and advocates in Congress, think tanks, and the press have supported these requests. The administration seems to be inclined to provide them, but recently the president raised concerns about whether some capabilities would be provocative. What are these systems? What capabilities would they provide, and why are they controversial?

Why Ukraine Has Asked for Rocket Systems

The great value of rocket systems is that they quickly provide a lot of fire. Within about two minutes, a single rocket battery (nine MLRS launchers) can fire 108 nine-inch rockets each with a 200-pound warhead. (The author personally saw these rockets employed during his tours in Iraq, and they are truly impressive.)

Although these capabilities are broadly useful, they are particularly effective against targets that can move but are presently stationary. The classic application is attacking enemy artillery, called counterbattery fire. Artillery units are stationary when firing but designed to move quickly when necessary. Thus, when enemy artillery units are located, it is essential to hit them quickly with a lot of fire. For these targets, rockets are superior to cannon artillery, which take much longer to deliver the necessary volume of fire.

Counterbattery fire is important because the Russians have not been shy about employing their firepower and, consequently, Russian artillery has proven to be the major threat to Ukrainian forces. In the current conflict, artillery, not aircraft or missiles, has caused most of the devastation seen in videos. Indeed, historically, artillery has caused more casualties in wartime than any other arm.

The United States is providing Ukraine counterbattery radars designed to find Russian artillery when it fires, complementing its rocket systems. The radars spot the shells’ trajectory and calculate where the shooting came from. This allows rapid counterfire for which rocket systems are well suited.

Drones are also well suited for providing locations for counterbattery fire, though they cannot conduct the fires themselves. To give a sense of scale, a drone that fires two Hellfire missiles delivers 36 pounds of explosive warheads, whereas a single HIMARS pod delivers 1,200 pounds.

Commentators have speculated whether the provision of long-range fires presages a more offensive phase by the Ukrainians. However, there is nothing inherently offensive about rocket systems. Their capabilities are just as useful in the defense as on the offense since adversaries are always using artillery. Providing the systems would signal a general increase in Ukrainian military capabilities. This increase will be important as Ukraine increasingly goes over to the offensive.

HIMARS is the more likely system that the United States will provide. It uses a heavy truck to carry one six-rocket pod. This is roughly equivalent to the Russian BM-27 Uragan, which has been deployed to Ukraine. A truck does not have as much cross-country mobility as a tracked vehicle but is much easier to maintain. This characteristic, also discussed below, will likely be critical as the Ukrainians are being overwhelmed with new and unfamiliar systems. 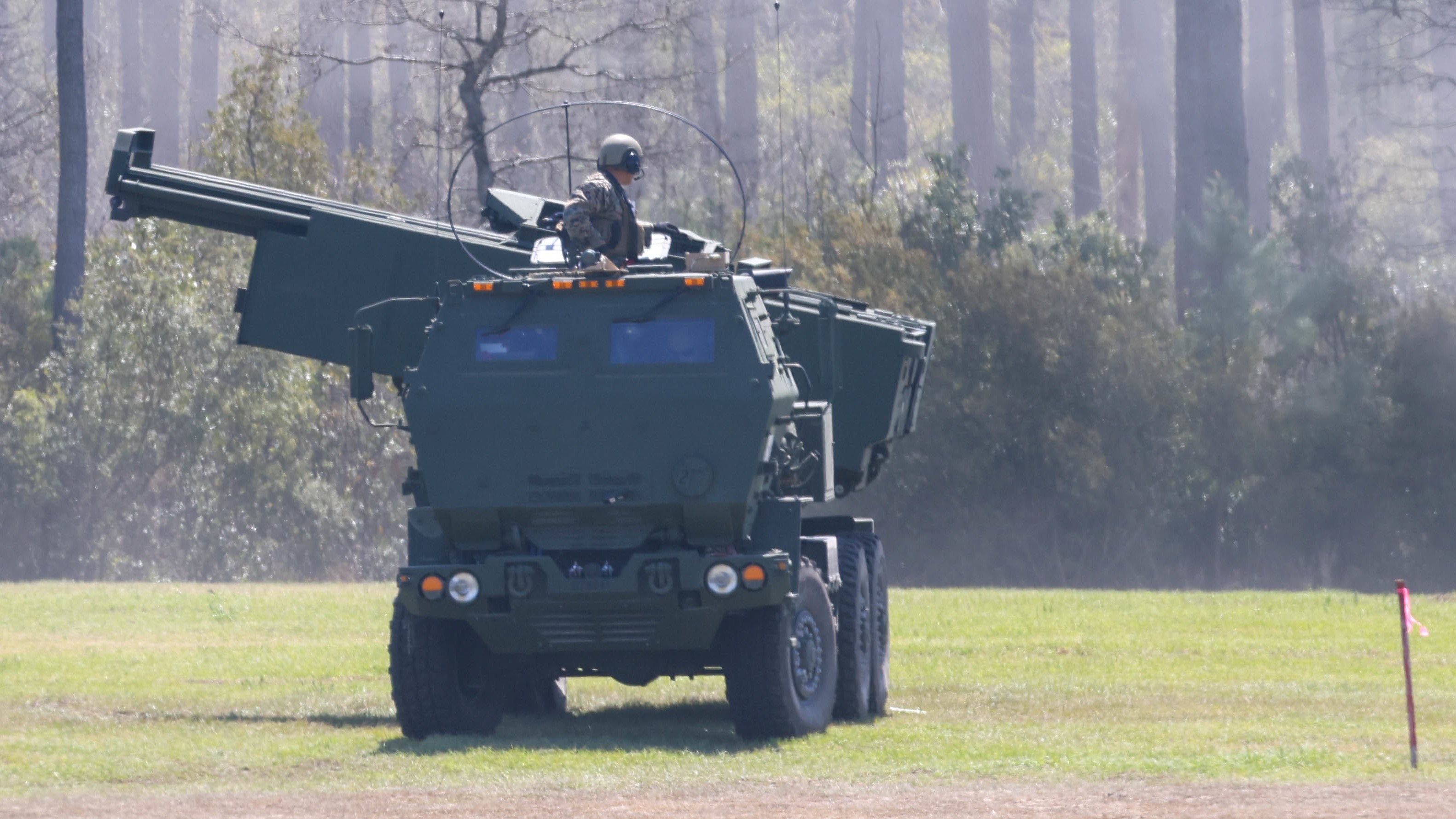 MLRS uses an armored vehicle― based on the Bradley M-2 chassis―to carry two pods. This is equivalent to the Russian BM-30 Smerch, also employed in Ukraine. Being tracked, MLRS can traverse more difficult terrain but is larger and heavier than HIMARS. The size and weight mean that the vehicle is more complex and might delay Ukraine’s ability to bring it into the fight. 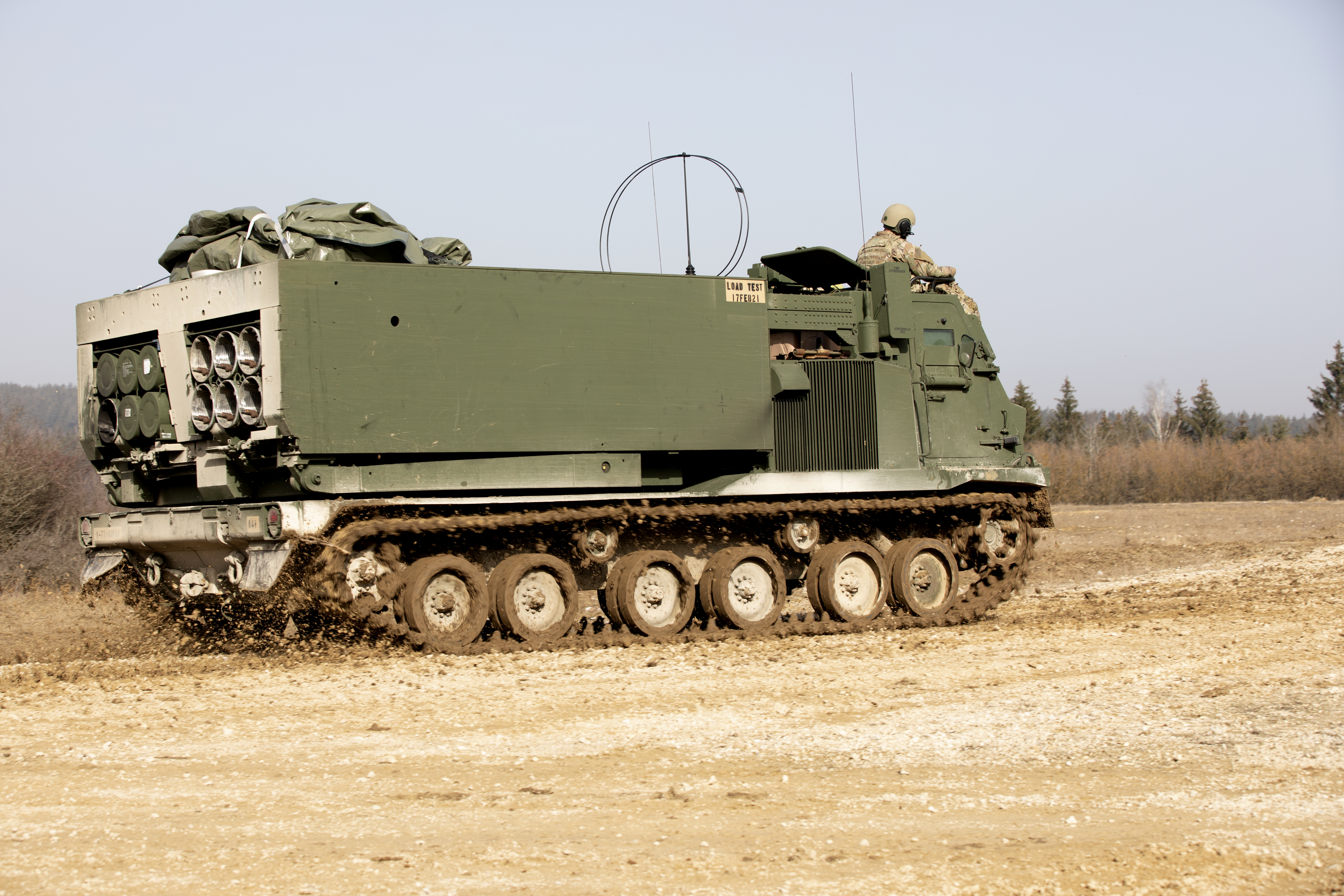 The rockets originally carried munitions called Dual-Purpose Improved Conventional Munitions (DPICM), colloquially known as cluster munitions. Each rocket contained 518 or 644 bomblets, (depending on the variant) that spread out over a wide area, making them much more effective than a unitary warhead with its single-point effect. Dual-purpose meant that the bomblet could explode as an antipersonnel weapon or focus its effects for penetrating the top of an armored vehicle. The wide area of impact and versatile effects made these munitions preferred over other munitions.

The problem with the bomblets was a relatively high dud rate, about 2 percent. Duds become, in effect, antipersonnel landmines, which the Ottawa convention has banned. The United States tried to get the dud rate under 1 percent but was unable to do so. Thus, the United States has replaced the DPICM version with a unitary warhead version. Unitary warhead means that there is a single large warhead rather than many small bomblets. Because unitary warheads are less effective, the U.S. military would like to retain the ability to use DPICM in combat emergencies, but that has been controversial. Thus, the Ukrainians will almost certainly receive the unitary warhead version.

Guidance: A Major Increase in Lethality

Counterbattery fire with unguided rockets will be important, but the provision of guided rockets could be a game changer. The United States developed such a rocket―called Guided MLRS (GMLRS)―in the 2000s and used it extensively in the wars in Iraq and Afghanistan.

The guidance allows the rocket to hit within 10 meters of the aiming point, eliminating the uncertainty of ballistic dispersion and greatly reducing the number of rockets required to destroy a target. (The system is not perfect; errors in target location may cause inaccuracy.)

There is also a guided cannon artillery round―called Excalibur―suitable for firing by howitzers, such as the M-777 that the United States is providing to Ukraine. The United States is presumably supplying these guided artillery shells along with the howitzers. Because these shell have the same range limitations as all howitzer projectiles, they are not a full substitute for rocket systems.

Although expensive ($160,000 each), GMLRS is still in production, which mitigates concerns about effects on U.S. readiness for other potential conflicts.

HIMARS/MLRS systems can fire a special munition that reaches out extremely long distances, the Army Tactical Missile System (ATACMS). Range is about 190 miles; cost is well over $1 million each, though the system has been out of production since the late 2000s. Each pod carries just one of these missiles. Like the regular rocket, it originally had a DPICM warhead but now has a unitary warhead. The purpose of such a long-range and expensive munition is to attack high-value strategic targets like headquarters, logistics nodes, or airfields where aircraft cannot be used because of unavailability or vulnerability.

Regular MLRS rockets can strike most targets in occupied Ukraine. ATACMS would therefore be most helpful striking targets located in the Russian homeland, which the much-diminished Ukrainian air force cannot reach. Many lucrative Russian targets now operate freely in the sanctuary of the Russian homeland. If Russia can attack targets in Ukraine, why can’t Ukraine attack targets in Russia? Attacking these strategic targets would further snarl Russian operations.

The Challenge of Maintenance

Ukraine is now receiving a flood of new equipment. In the early days, the equipment was mainly munitions and easy-to-use weapons like Javelin, the Next generation Light Anti-tank Weapon (NLAW), and Stinger. Then, U.S. and NATO allies began providing major weapons of the kind the Ukrainians already had so operations and maintenance would be familiar. Now, Ukraine is receiving weapons that it has never used before. Although the United States and other NATO allies have set up training programs, conducting training rapidly during wartime is a challenge. Training and requirements for this new system will come on top of a long line of other new systems demanding top personnel and attention. A previous CSIS commentary explored those difficulties and their policy implications.

The administration has said that it will make a decision this week about what sort of equipment it will provide. Although administration sources walked back the president’s denial, there is an obvious deal to be made: the United States provides HIMARS with the regular rockets, including GMLRS, but not ATACMS. Russia will complain that this represents an escalation, but that complaint is without merit since the Russians are using equivalent systems.

Hovering in the background is the mounting problem of maintaining all the new systems that Ukraine has demanded and is now receiving. A collapse of the Ukrainian logistics system, with parking lots full of broken-down U.S. and NATO equipment, might disillusion many of Ukraine’s supporters and undermine the entire equipping program.