Arms and Influence in Southeast Asia: The Link between Arms Procurement and Strategic Relations

Southeast Asia is the epicenter of U.S.-China competition, but most countries in the region avoid taking sides. Arms procurements can be an important indicator as to how Southeast Asian countries perceive risks from China and how they approach strategic relations with external powers. While many of these countries harbor concerns about China and are expanding strategic relations with the United States, they are diversifying their suppliers to avoid creating arms dependencies that could limit their future options.

Russia has historically been an important supplier of affordable arms for many Southeast Asian countries, but its arms sales to the region have gradually declined. According to data from the Stockholm International Peace Research Institute, Russia’s share of arms sales to countries in the Association of Southeast Asian Nations shrank from a peak of 43 percent in 2011 to just 8 percent in 2021. Russia’s arms exports suffered following international sanctions over its 2014 annexation of Crimea, and new sanctions will likely exacerbate this downward trend. Indeed, in June, the Philippines withdrew from an unprecedented helicopter deal with Russia over concerns about U.S. sanctions.

Like Russia, China is also known for providing affordable arms. The size of China’s arms industry, likely at least twice the size of Russia’s, suggests that it has the capacity to eventually become the region’s preeminent affordable arms supplier. Yet, Southeast Asian countries have not uniformly embraced Chinese arms. Four countries—Cambodia, Indonesia, Vietnam and the Philippines—typify the predominant procurement strategies in the region. 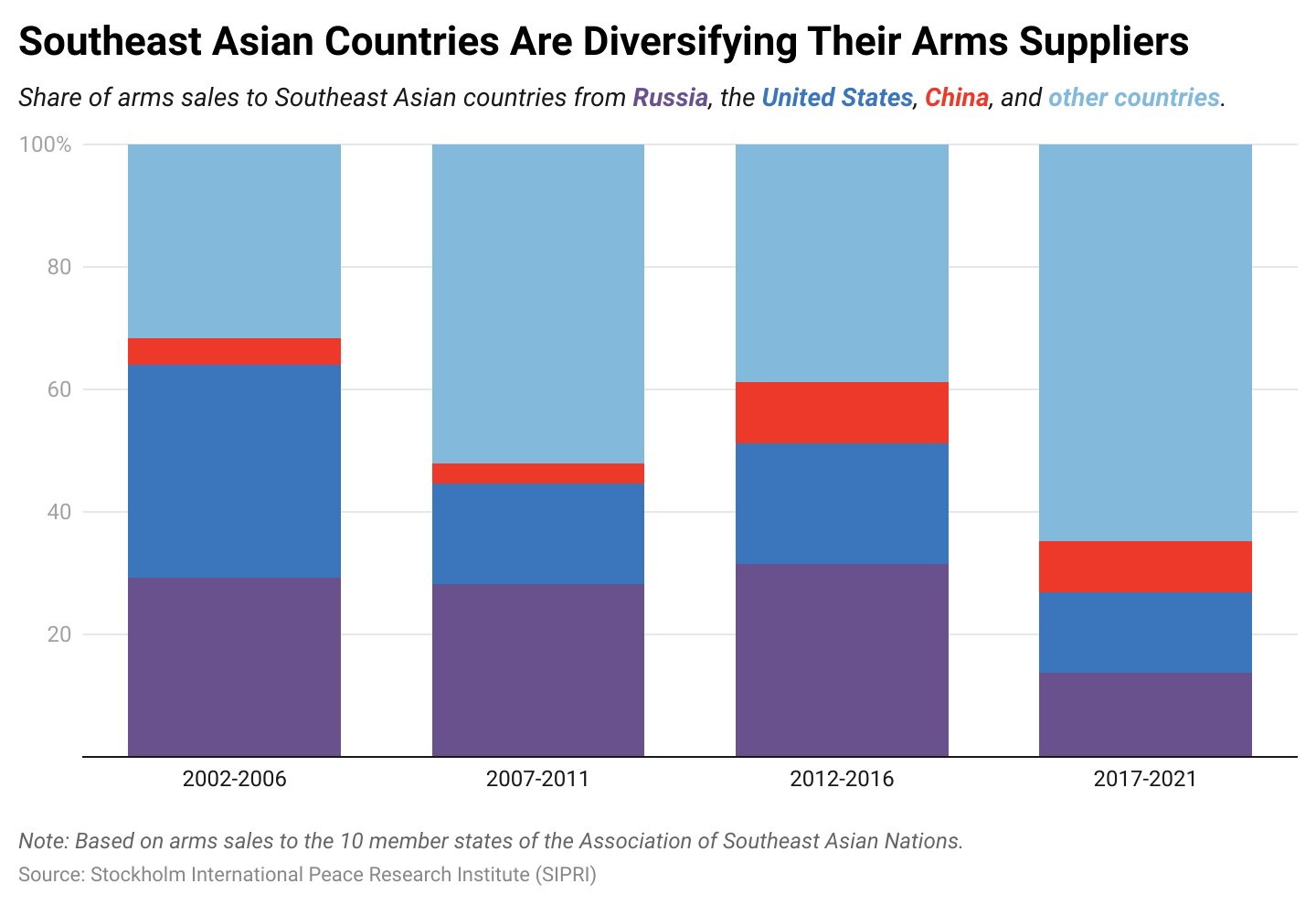 Cambodia’s political and human rights abuses have damaged Phnom Penh’s relations with the West and driven the country closer to Beijing. Following U.S. criticism in 2017, Cambodia canceled the eighth iteration of the U.S.-Cambodia “Angkor Sentinel” exercise. One year prior, China and Cambodia hosted their first combined military exercises, including “Golden Dragon,” which became an annual occurrence starting in 2018. In 2019, reports first emerged of a secret agreement that would give China basing rights at Cambodia’s Ream Naval Base. In 2020, satellite images revealed the demolition of U.S.-built military facilities at Ream, and this year construction began on Chinese military facilities.

Cambodia’s arms procurements occur intermittently but in the last major period of procurements, from 2006 to 2013, China provided the largest share of arms to Cambodia at 45 percent. Russia and the United States provided none. Cambodia has no major external security threats and its military has historically been built around Soviet systems, so choosing China over Russia for procurements may have been the result of political decisions to support the strategic relationship. Its reliance on Chinese arms indicates that Cambodia perceives little to no risk from China. Indeed, in the latest ISEAS State of Southeast Asia survey—which polls policymakers, experts, and other elites—84 percent of Cambodian respondents believed that relations with China would improve over the next three years, and if forced to choose between the United States and China, 81.5 percent picked the latter.

Indonesia’s approach to strategic relations can be encapsulated by bebas-aktif, a concept that advocates for a “free and active” foreign policy which aims to maximize strategic flexibility by having many friends and no enemies. Bebas-aktif helps explain Indonesia’s comprehensive security and economic engagement with both the United States and China. Even so, Indonesia has not been shy about defying China, particularly in asserting control of its exclusive economic zone in the South China Sea. Maritime disputes and preexisting security concerns are pushing Indonesia to deepen strategic relations with the United States.

Indonesia started procuring Chinese arms in 2006, but through 2021 China only accounted for 5 percent of the country’s total arms procurements. In the same period, 12 percent of its procurements came from Russia, while 80 percent came from the United States and 19 of its allies (particularly Germany, South Korea, and the United Kingdom).

Fighter plane procurements provide unique insights, given their high cost and training requirements. Indonesia has not procured any fighters from China and has been shifting away from Soviet and Russian fighters for decades. Indonesia’s Russian-made fighters are likely to be replaced by newly procured F-15s, and fighter squadrons will be expanded with French and South Korean aircraft in coming years. Indonesia has even partnered with South Korea to develop the KF-21 stealth fighter. Procuring China’s fifth-generation FC-31 fighter, or Russia’s Su-57E or Su-75, could be more expedient, but Indonesia is making a strategic investment by further diversifying its suppliers and developing indigenous capabilities. Despite the size and maturity of its aviation industry, China has struggled to sell its fighters abroad; Myanmar is the only Southeast Asian country to procure Chinese fighters in over 40 years.

Vietnam and the Philippines

Vietnam and the Philippines represent another approach. They are among the poorest countries in Southeast Asia, yet they eschew more affordable Chinese arms even as wealthier countries in the region procure them. Vietnam fought with China throughout the late-1970s and 80s, and both Vietnam and the Philippines express concerns about China’s behavior in the South China Sea and have had several confrontations with Chinese maritime forces. Any dependence on Chinese arms would be a significant vulnerability in an armed conflict. Thus, security concerns toward China and strategic relations with the United States are likely both at play in these countries’ decisions to eschew Chinese arms.

Vietnam stopped receiving arms from China after 1973, leaving the Soviet Union (and later Russia) as its main supplier. Vietnamese procurements sharply increased in 1979, the year China invaded, and in 2011 amid major escalations with China in the South China Sea. Despite its long-time dependence on Russia, Vietnam started diversifying its arms procurements in 2016—the year Washington lifted its arms embargo on Hanoi. From 1995 to 2015, Russia provided 90 percent of Vietnam’s arms procurements, but from 2016 to 2021 Russia’s share dropped to 63 percent. Vietnam’s desire to deepen strategic relations with the United States may be encouraging it to reduce dependence on Russian arms, but it also follows the broader regional trend of diversifying suppliers.

The Philippines faces similar strategic and procurement considerations. In spite of former Philippine president Rodrigo Duterte’s 2016 announcement of a “separation from the United States” and realignment with China and Russia, disputes with China in the South China Sea and continuing security cooperation with the United States have created resilience in the U.S.-Philippines alliance. Under president Ferdinand Marcos Jr., the allies have renewed efforts to expand defense ties under the 2014 Enhanced Defense Cooperation Agreement.

Following the Cold War, Philippine arms procurements stayed relatively low before beginning a sharp uptick in 2011—also amid escalations with China in the South China Sea. The Philippines’ economic situation plays a significant role in limiting the country’s procurement options. Manila has at times even accepted military aid from China. Nevertheless, the Philippines continues to eschew Chinese and Russian arms procurements. From 2011 to 2021, the United States provided 26 percent of Philippine procurements while South Korea provided 40 percent, Indonesia provided 10 percent, and the rest came from a range of U.S. allies including Israel, Germany, and Spain.

These four countries typify the prevailing procurement strategies within Southeast Asia and can shed light on how other countries in the region approach arms procurement and strategic relations. Like Cambodia, Laos and Myanmar rely more heavily on Chinese arms but strike a greater balance with Russian arms. Like Indonesia, Thailand and Malaysia make limited procurements from China and diversify with numerous other suppliers. Singapore is a close U.S. security partner and eschews Chinese arms, but, unlike Vietnam and the Philippines, this may be influenced by Singapore’s ability to afford more expensive arms.

While rebalancing among major arms suppliers, Southeast Asian countries are also diversifying with smaller suppliers—including with Indonesia’s own growing arms industry. By doing so, they are effectively reducing the leverage of external powers and bringing themselves closer to the region’s long-held ideal of strategic flexibility.

Gavril Torrijos was a research intern with the China Power Project at the Center for Strategic and International Studies.