The Biggest But Not the Strongest: China’s Place in the Fortune Global 500

With the world paying close attention to the geostrategic tensions between the United States and China, it is surprising that little coverage was given to what could be seen as a major development in superpower competition. Last week Fortune released its latest Fortune Global 500 list, and for the first time China had the largest number of companies represented. Chinese firms slightly outpace those from the United States, 124 to 121, and are way ahead of third-place Japan, which now has only 53 companies on the list. China now has more firms on the list than France, Germany and Great Britain combined. 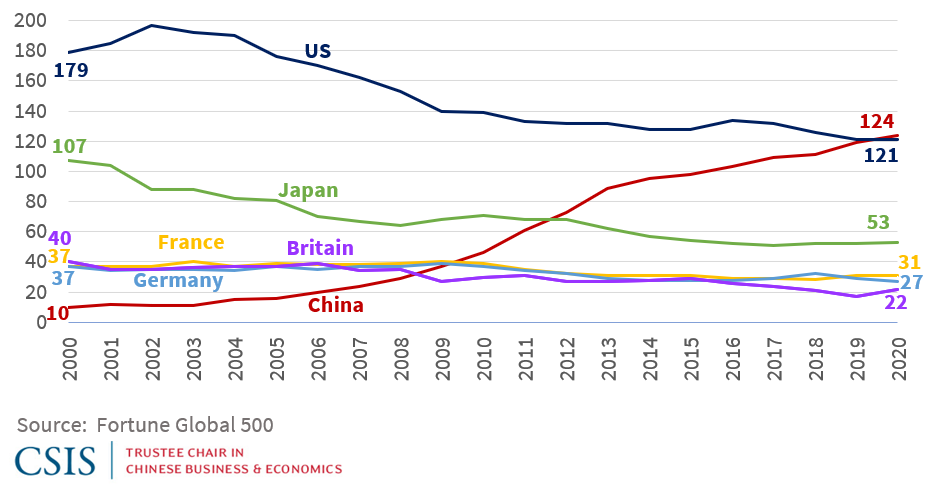 Fascination with China’s place in global rankings goes back at least to the early 1990s, when the International Monetary Fund (IMF) began issuing estimates of gross domestic product (GDP) calculated by purchasing power parity (PPP) that showed China’s economy was approaching the size of Japan and the United States. According to the IMF, China passed the US in PPP terms in 2014, and now the debate is about when it will take the lead in nominal terms.

The Fortune list is the most conspicuous corporate equivalent of the economy-wide GDP comparison. Although eye-catching, the reality is that in some ways both are overhyped. We have dug a little deeper into the numbers – and individual companies – and the overall rankings tell far from the whole story. China now has the largest number of companies on the list and some of them have become much more formidable in their industries, but in general Chinese companies are still far from the world’s strongest. This conclusion is not new, but in an era of greater conflict and loudening calls to counter growing threats, it is more important than ever to be empirical. Here is what the data tells us.

The United States and China Stand Out in Scale

In terms of size, it is a two-country race. The US and China now accounting for almost half of all Fortune Global 500 companies. Over the last two decades, the number of Chinese firms has grown over twelve fold, while the proportion of American firms has fallen by one-third, from 36% to 25%. Similarly, over this period, the number of Japanese firms has been cut in half, now down to only 11%. Meanwhile, the share of companies from other advanced economies have also dropped. Almost all of the gains have gone into China’s column.

Both American and Chinese firms also far outpace their counterparts in other size metrics, including revenue, profits, assets, and employees. But while Chinese entrants have surpassed American firms in terms of numbers and total assets, the US still is substantially in front of China when measured by annual revenue, $9.8 trillion to $8.3 trillion. 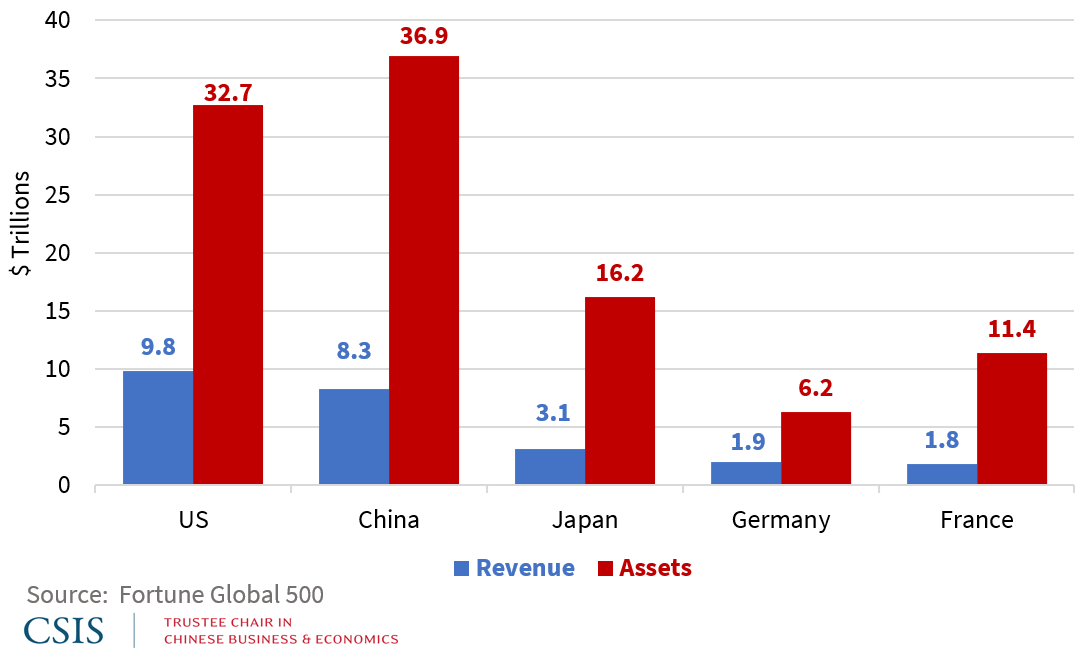 Despite their gargantuan size, or perhaps because of it, Chinese firms look less impressive when measured in terms of profitability. Their profit margin (profits/revenue) in 2020 was 4.5%, just slightly ahead of France (4.3%), but much lower than firms from Switzerland (8.3%), the US (8.9%) and Canada (9.1%). The story is even worse for return on assets (ROA). China’s 124 listed companies averaged an ROA of 1.9%, still just ahead of France (1.7%), but once again substantially behind Switzerland (4.2%) and the US, which led at 4.9%. 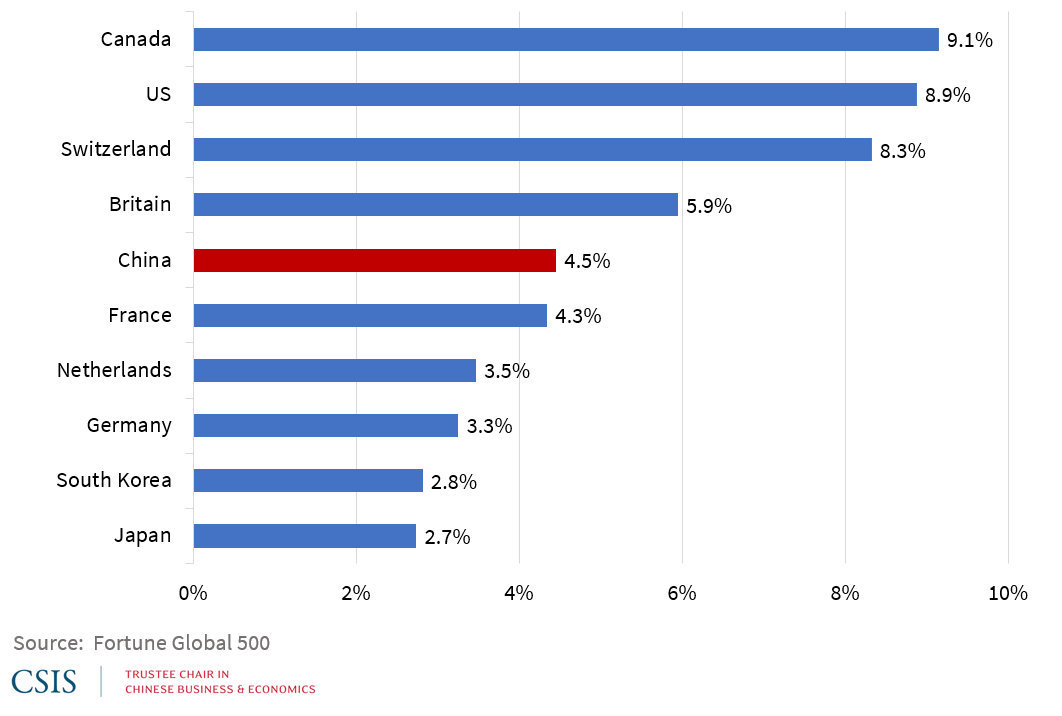 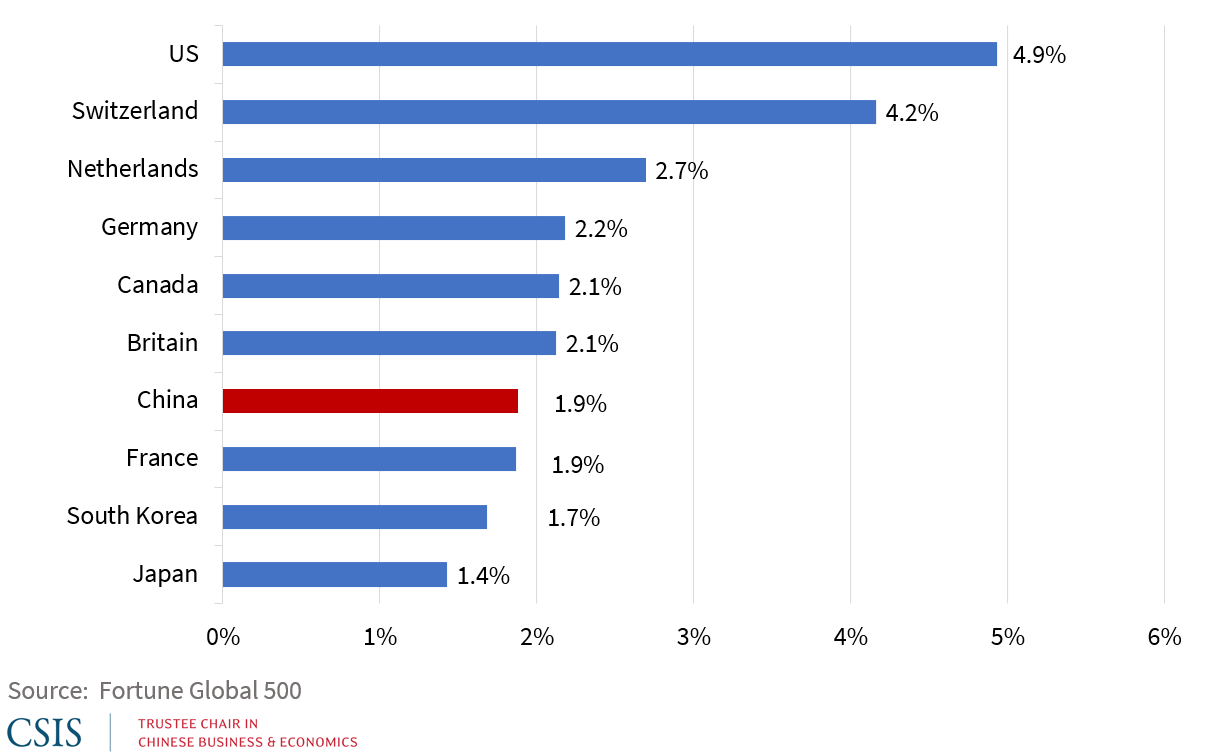 Why do Chinese perform so poorly relative to other Fortune 500 firms? It’s simple: state-owned enterprises (SOEs). China’s largest firms in most industries are SOEs, and 91 of the 124 Chinese members to the latest Fortune Global 500 are SOEs. It’s worth noting that our count differs from that of Fortune, which classifies only 68% (84) of the Chinese firms as SOEs. They sorted based solely on whether a state entity holds more than 50% formal ownership; our decision also took into consideration actual corporate control. For example, Fortune labels Gree, an appliance maker based in Zhuhai, as private, but on its website, Gree clearly states that it's a locally-owned SOE.

Others have long documented how inefficient Chinese SOEs are in absolute terms and in comparison to their counterparts in the private sector. Hence, it is not surprising that whereas SOEs currently account for 73% of Chinese by number of firms, they represent 78% of total revenue and 84% of all assets from Chinese entrants to the list. Equally unsurprisingly, the difference in profitability of the Chinese SOEs and private firms on the list is wider than the Yangtze River. SOEs’ average ROA is a measly 1.2%, one-third the level of private firms. And their average profit margin is only half that of Chinese private companies.

This is not to say that SOEs are all old dinosaurs who should have all died off decades ago. In fact, as recent analysis shows, the amount of government largesse they receive relative to private companies has fallen by some measures. Nevertheless, as has been widely documented, China’s massive and growing stock of corporate debt is disproportionately situated on the balance sheets of SOEs. 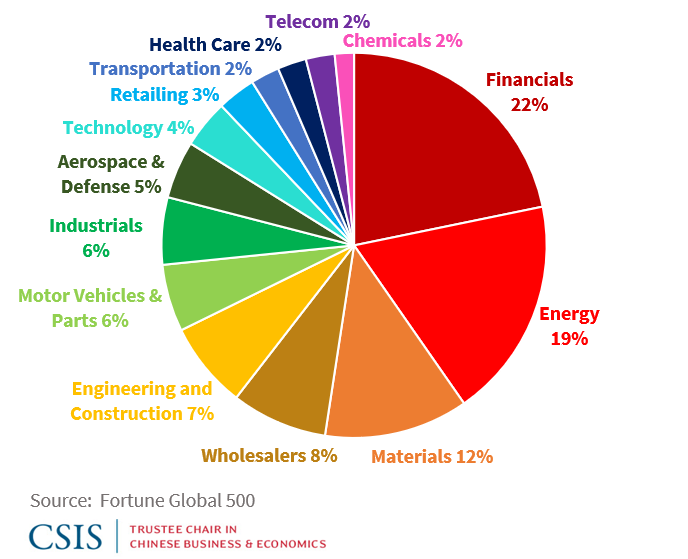 A common retort is that SOEs are primarily situated in capital-intensive sectors that address public needs, such as utilities, and thus are inevitably less profitable than private companies. But side-by-side comparisons of Chinese SOEs and private firms in the Global Fortune 500 in the same sector do not bear this out (download the full list). For example, the state-owned Industrial & Commercial Bank of China (#24) has an ROA of only 1.0%, while the private China Merchants Bank (#189) has an ROA of 1.3%. Similarly, the ROA for China State Construction Engineering (#18) is far below that of the Pacific Construction Group (#75), 1.1% to 5.4%. For two illustrative cases, see the brief profiles below of Ping An Insurance and the Aviation Industry Corporation of China (AVIC). 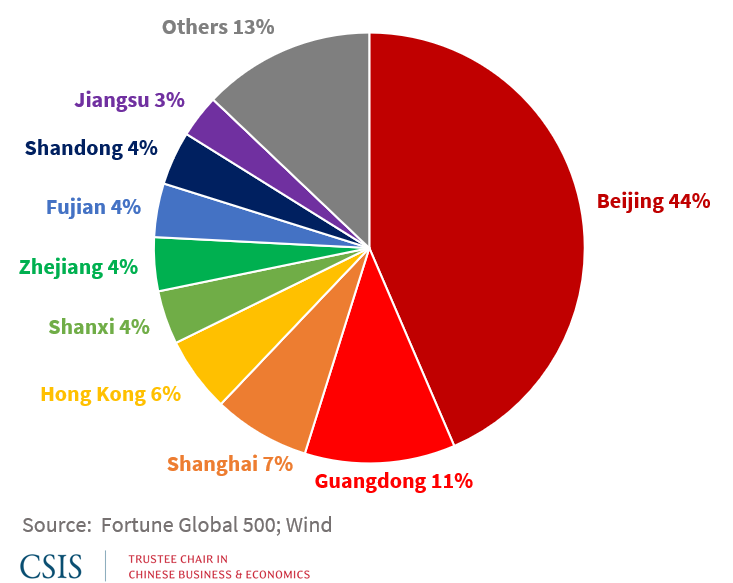 There is one final way in which the Chinese representatives are distinctive. An amazing 54 of the 124 companies hail from the Chinese capital, Beijing. Before you go thinking that the municipality should also now have the title of China’s commercial capital (Shanghai has only 9 firms on the list), you should know that 50 of the 54 are SOEs, and of them, 48 are “central SOEs,” directly under the authority of the national government, either the State-Owned Assets Supervision and Administration Commission (SASAC) or the Ministry of Finance. Hence, their headquarters may be in Beijing even if most of their commercial operations are elsewhere in the country. This regional distortion is just another signal that even after 40 years of “opening and reform,” the state still plays an outsized role in the life chances of the country’s companies.

Founded in 1988 by Ma Mingzhe, Ping An Insurance Group is China’s largest insurer, with a current market cap of roughly $210 billion. Worldwide, Ping An’s market share is second only to Berkshire Hathaway among insurance companies.

Ping An’s status as a Chinese private company is remarkable given its size. It is the largest private company in the country, with the next-largest (Huawei, #49) trailing it significantly in revenue, profit, and assets. According to Ping An’s 2019 filings, the shareholding structure of the company is relatively dispersed; the largest private owner is the Thai company CP Group Ltd. (8.97%), while the largest state agency with equity is Shenzhen Investment Holdings Co (5.27%).

That said, Ping An has faced accusations of corruption, receiving attention from regulators in 2016, 2018, and 2019. Additionally, insurance payouts from the Coronavirus have been a significant challenge for Ping An in 2020, with Hong Kong shares decreasing by 30% over the course of the first quarter.

Founded in 1951 as the Bureau of Aviation Industry, the Aviation Industry Corporation of China (AVIC) has played a significant part in China’s military manufacturing since the Korean War. Its current consolidation as AVIC took place in 2008. It joined the Fortune 500 list at #426 in 2009, and its ranking has been more or less stable since 2014.

Fortune classifies AVIC as a private company, but this should be understood only in the sense that it is not a publicly traded company. AVIC is not a privately-held company. Instead, it is under the direct supervision of SASAC, along with other Fortune 500 companies such as Sinopec (#2), the State Grid (#3), and China National Petroleum (#4).

Earlier this year, the U.S. Department of Defense placed AVIC and 19 other Chinese companies on a list of companies it has determined are owned or controlled by the Chinese military. Given AVIC’s substantial role in designing and building fighter jets and military helicopters, in its case this designation makes sense. This designation in itself does not create penalties, but it authorizes the President to impose sanctions on these companies at his discretion. This authority is significant for companies engaged in business with companies in which AVIC has sizeable holdings. This includes major firms like the Commercial Aircraft Corporation of China (COMAC), which is developing the country’s first narrow-body commercial airliner, the C919, in cooperation with a large number of Western aerospace firms. Ironically, challenges may arise for U.S. Treasury Department, as it allocated $5-$10 million in PPP loans to Continental Aerospace Technologies, a manufacturer under AVIC’s control.

Scott Kennedy is senior adviser and Trustee Chair in Chinese Business and Economics at the Center for Strategic and International Studies. Mario Colella is a research intern (Summer 2020) in the Trustee Chair and a Master’s student at Johns Hopkins-SAIS.