The initial response to COVID-19 in China involved all elements of the party-state: the central authorities, local governments, healthcare workers, and the military. Philanthropic organizations were nowhere to be seen. That has changed dramatically in the last two months, as philanthropy has taken off.

As we and others have documented, China’s philanthropic sector is deeply conflicted. It has grown rapidly. Annual donations have skyrocketed, from $1.6 billion in 2006 to over $16 billion in 2018; giving is led by the country’s young private entrepreneurs; there are over 7,000 foundations and almost a million registered non-profit service organizations; online philanthropic mechanisms have flourished; and Chinese have started to engage in philanthropy beyond its borders, particularly in healthcare.

At the same time, the sector has a range of systemic problems. Fearful of a color revolution, the Chinese Communist Party (CCP) substantially restricts the independence of foundations and NGOs. As the New York Times reports, the Chinese Red Cross, which is directly managed by the CCP, has come under criticism for its sluggish response to the pandemic. Philanthropy in China is channeled into providing aid consistent with state priorities, and there is limited advocacy leadership that would seek to set or challenge regime priorities. There has been a history of poor professionalism and signs of corruption, something the Charity Law attempts to redress. And finally, the space for foreign foundations and NGOs has shrunk in the wake of the adoption of the highly restrictive Foreign NGO Law.

It will take years to fully understand the philanthropic response in China to COVID-19, but the Yishan China Philanthropy Data Center is compiling data in real time on donations over the past few months. Here is a quick summary of what they’ve found so far:

Donations to public charities, such as the Chinese Red Cross, started in late January and by April 22 had reached over $5 billion. Despite the unprecedented economic slowdown, it is likely that philanthropic giving in China will break all records this year. 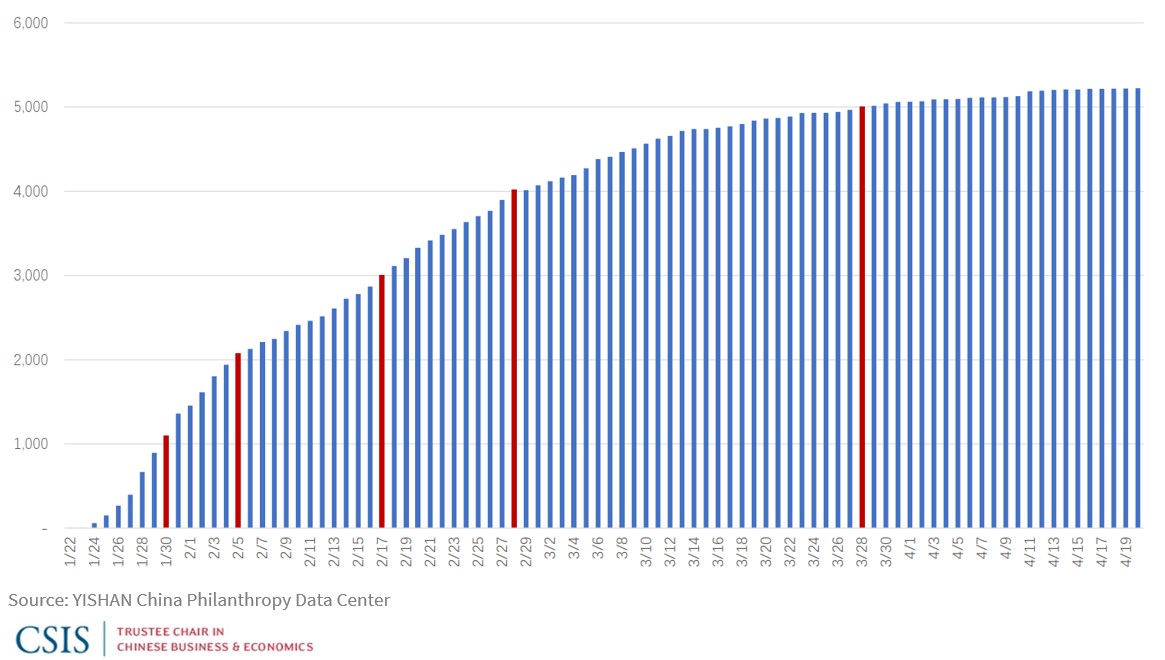 The large majority of donations come from companies, 72% so far. This is consistent with the long-term pattern in China and a big contrast to the United States, where individual giving predominates. 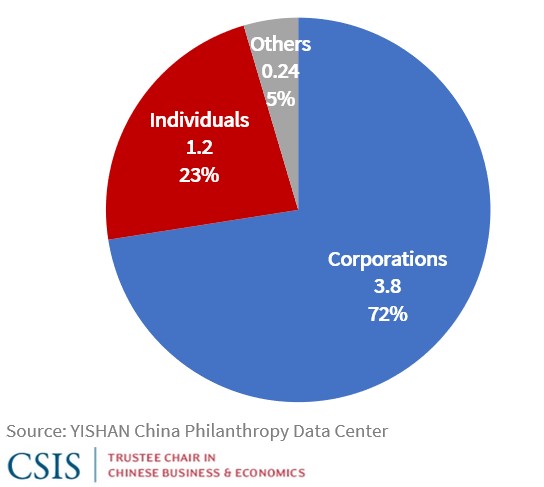 State-owned enterprises (SOEs) have given the largest share of donations, at 47% (RMB 5.8 billion), with domestic private firms accounting for another 41% (RMB 5.2 billion) and foreign-invested firms 12% ($1.4 billion). SOEs’ share is higher than their overall contribution to the economy, but that is likely because SOEs are more responsive to state entreaties to make donations, both because they are integrated with the state and they have looser budget constraints, permitting philanthropy even in times of significant economic distress. 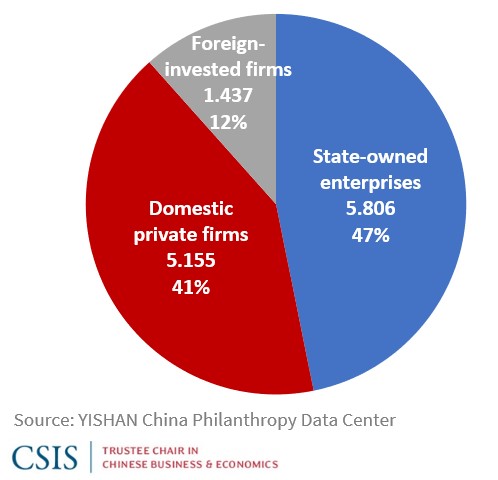 In terms of industries, leading the way is manufacturing (22%), followed by financial institutions (16%), wholesalers and retailers (14%), commercial services (13%), real estate (11%), and tech firms (8%). This is despite reports that three of top seven donors are tech giants – Tencent, Alibaba and Baidu. In less stressed times, the largest and most innovative donors have come from real estate and high-tech. 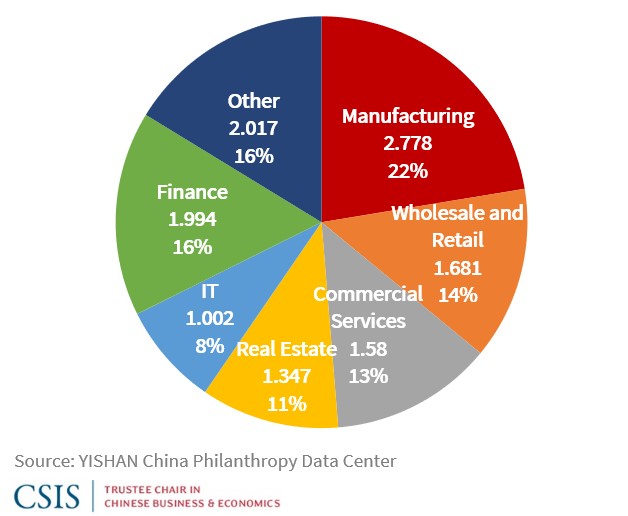 Regionally, the top source of donations has been Beijing (25%), followed by Guangdong (19%). Surprisingly, the 3rd leading source of donations is from Inner Mongolia (8%), but the riddle is solved by reports that two of the single largest donations early on came from the province’s largest dairy companies, Mengniu and Yili. 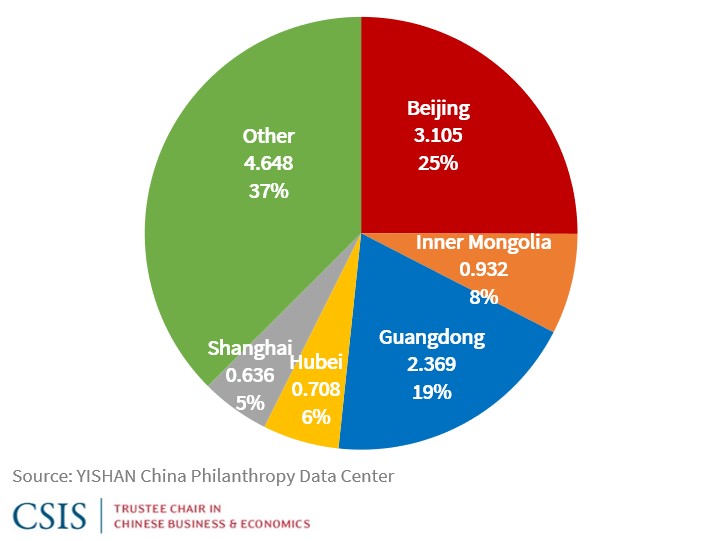 Finally, not surprisingly, the top destination for donations has been Hubei province, home to Wuhan. Two other publicized hotspots have also been targeted by donors, Beijing and the coastal province of Zhejiang. Wenzhou, in southeast Zhejiang, is home to world famous traders. Many of them normally travel through Wuhan, and some likely tragically brought the virus back with them to Wenzhou in January. 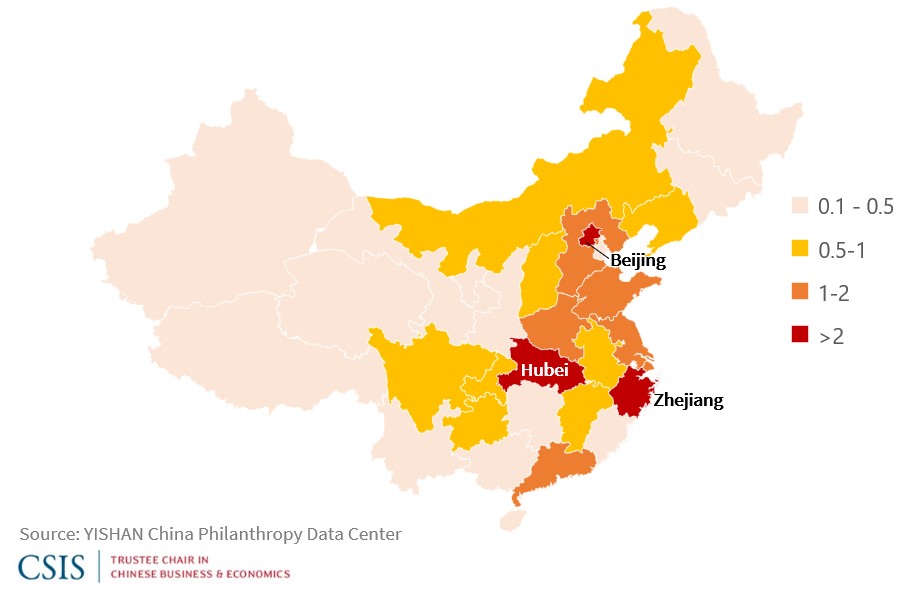 Scott Kennedy is Senior Adviser and Trustee Chair in Chinese Business and Economics at CSIS.