Dealing with a Nuclear Iran

Both the Bush and Obama administrations have attempted to end the threat posed by Iran’s nuclear program. Most outside parties fear the implications of Iran growing closer to a real nuclear weapons capability, including how security is calculated throughout the Middle East. The prospect of an Iranian bomb is so daunting that several countries—including the United States—have indicated a willingness to use military action to set back the Iranian effort, and the consequences of such a strike could themselves shake the foundations of diplomatic and security relationships throughout the Middle East.

With the U.S. and Israeli elections over, and with Iranian elections looming, are there alternatives to a steady Iranian march toward a nuclear weapons capacity? Is it possible to envision a solution or process that could be acceptable to Iran, the United States and its allies, other permanent members of the UN Security Council and Iran’s neighbors? If so, what would it look like and how should it be pursued? What steps should be taken to make it more likely that it is part of a genuine process of de-escalation rather than merely marking time until Iran acquires a weapon?

Please join us on Wednesday, February 6th for a half-day forum with CSIS experts to consider what successful solutions might require from Iran, the United States and other key states.

China Headaches for Iran Deal
By Jon B. Alterman
September 22, 2021
On Demand Event

The Future of Humanitarian Operations: Aid and Politics in Syria
July 7, 2021
On Demand Event 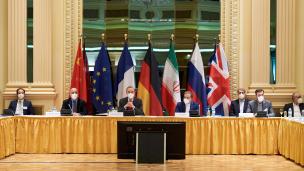