Hay’at Tahrir al-Sham (HTS or the “Organization for the Liberation of the Levant”) traces its beginnings to the outset of the Syrian civil war and has remained a dangerous opposition force throughout the duration of the conflict. In May 2018, the group was added to the State Department’s existing designation of its predecessor, the al-Qaeda affiliate Jabhat al-Nusra, as a Foreign Terrorist Organization (FTO). Today, HTS can be thought of as a relatively localized Syrian terrorist organization, which retains a Salafi-jihadist ideology despite its public split from al-Qaeda in 2017. This backgrounder provides an overview of the history, leadership, and current strategic goals of HTS.

Formation and Relationship with al-Qaeda

As mentioned above, Jabhat al-Nusra, HTS’s precursor organization, was formed in Syria in 2011 as al-Qaeda’s affiliate within the opposition to the Assad regime. Nusra’s leader, Abu Mohammad al-Jolani, quickly established a capable organization, which secured its own donors in the Persian Gulf, collected revenue from taxation and asset seizures in the territories under its control, became adept at conducting insurgent attacks, and attracted a growing number of fighters. 1 Jabhat al-Nusra maintained its ties to al-Qaeda even after al-Qaeda’s highly publicized split with the Islamic State, whose leader, Abu Bakr al-Baghdadi, had been instrumental in Jabhat al-Nusra’s initial establishment. In late July 2016, however, al-Jolani announced the dissolution of Jabhat al-Nusra and the establishment of a new group, Jabhat Fatah al-Sham. The group no longer had “external ties” with al-Qaeda, which many analysts suggested was an indication that while al-Jolani had formally severed its public relationship with al-Qaeda, the group would, in theory, continue to have a secret relationship with al-Qaeda and receive strategic and operational guidance. 2 However, al-Jolani’s announcement was undertaken without consulting Ayman al-Zawahiri, the emir of al-Qaeda, and created significant tension within the organization. 3

Today, HTS maintains that it is “an independent entity that follows no organization or party, al-Qaeda or others.”

In late January 2017, Jabhat Fatah al-Sham rebranded yet again when it merged with several other groups—Harakat Nour al-Din al-Zinki, Liwa al-Haq, Jaysh al-Sunna, and Jabhat Ansar al-Din—to establish HTS. At this point, statements and communications from al-Qaeda’s leadership viewed HTS as an independent Salafi-jihadist organization that had illegally broken away from al-Qaeda and shattered its oath of allegiance. 4 Several prominent jihadists left HTS altogether and publicly criticized the group for sowing division (or fitna) and breaking their bayat to al-Zawahiri. 5 Al-Zawahiri himself made several statements opposing the merger, which he said was “a violation of the covenant” that “did not achieve what they sought of unity” and was never sanctioned by al-Qaeda’s leadership. 6

Today, HTS maintains that it is “an independent entity that follows no organization or party, al-Qaeda or others” and has gone so far as to arrest al-Qaeda-linked individuals in the territories under its control to prove that no allegiance exists. 7 Despite these claims, the U.S. government believes that a link between the two groups remains, even calling HTS a “vehicle to advance [al-Qaeda’s] position in the Syrian uprising and to further its own goals” in its FTO designation. 8 Recent reporting by the United Nations seems to confirm that, at the very least, some communication remains: HTS “and its components still maintain contact with Al-Qaida leadership” according to several state intelligence services. 9

Today, HTS remains under the leadership of Abu Mohammad al-Jolani, but the group’s goals have shifted somewhat since announcing its independence from al-Qaeda. Though al-Jolani’s public statements do occasionally suggest broader aims (e.g., “With this spirit… we will not only reach Damascus, but, Allah permitting, Jerusalem will be awaiting our arrival” 10), the far-reaching “global caliphate” rhetoric favored by al-Qaeda is largely absent in HTS publications today. Instead, the group is locally focused, with its primary objective being the establishment of Islamic rule in Syria via “toppling the criminal [Assad] regime and expelling the Iranian militias.” 11

To this end, al-Jolani has promoted a multi-pronged strategy. The first stage, which HTS claimed to have completed in August 2018, was the removal of “Iranian militias and the militants from the towns of Fu'a and Kafriya, who were a threat to the entire region and an incentive for sectarian mobilization, and which the regime exploits to achieve its goals.” 12 The second stage, which remains ongoing as of October 2018, is a campaign against the Islamic State and its allies in Syria, who al-Jolani has decried as “destabilizing.” 13 The third stage is one of entrenchment, or “fortifying and defending” northern Syria in order to prevent the loss of further territory. 14 Complementing this military strategy is a political one, in which HTS pursues unity amongst jihadist groups in Syria—referring to this unity as “one solid rank”—while maintaining a policy of “no negotiations” or reconciliation with the Assad regime. 15

According to the CSIS Transnational Threats Project’s recent report on Salafi-jihadist groups, HTS has a fighting force of between 12,000 and 15,000 militants as of October 2018. 17 The group is principally located in Syria’s Idlib province, though it has enjoyed an operational presence in Syria’s Aleppo, Hama, Dera’a, and Damascus provinces, as highlighted in Figure 2 above. Though HTS is known as a terrorist organization, the vast majority of the “violent events” attributed to the group fall in line with its anti-government, anti-Iranian, and anti-Islamic State strategy: 1,786 such incidents were classified by the Armed Conflict Location & Event Data (ACLED) Project as battles against the Syrian regime or other militants, while only 99 were classified as “violence against civilians.” 18 As the figure below highlights, levels of HTS violence have ebbed and flowed, but since the group’s formation in March 2017, it has consistently averaged at least one violent incident per day. Although the group’s operational focus has become more localized, its predecessor Jabhat al-Nusra provided sanctuary to operatives like Muhsin al-Fadli and Abdul Mohsen Abdullah Ibrahim al-Sharikh that plotted attacks in the West. 19 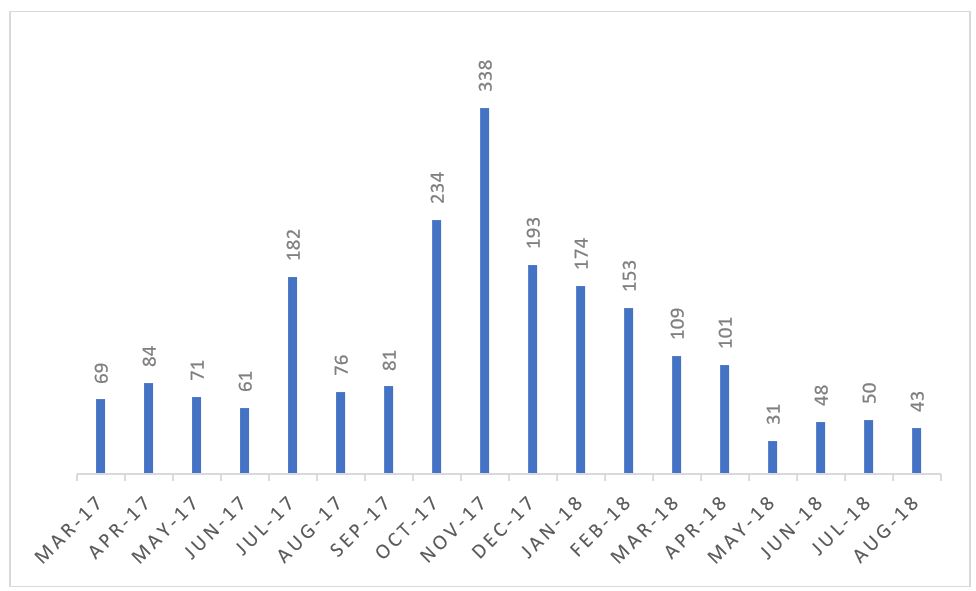 Throughout 2018, however, HTS suffered several setbacks, including the aforementioned disavowal by al-Qaeda’s central leadership as well as large-scale losses of territory, faltering local support, assassinations of key leaders, and significant defections in its ranks. 21 Moving forward, HTS’s future is uncertain. Turkey has pressured the group to dissolve and join a larger Turkish-backed opposition coalition, though HTS leaders have remarked that “matters relating to the organizational structure of Hay’at Tahrir al-Sham are non-negotiable.” 22 The group also faces an assault by the Syrian regime and its allies, including Russia, in Idlib. Finally, HTS has numerous competitors among the Syrian opposition, including from the National Liberation Front, which includes groups like Ahrar al-Sham, Jaysh al-Ahrar, and Suqour al-Sham.

This terrorism backgrounder was compiled by Danika Newlee with assistance from the CSIS iDeas Lab.

©2018 by the Center for Strategic and International Studies. All rights reserved