In our sixth edition of Talking Urban Futures in Africa, CSIS Africa Program director Judd Devermont speaks to Tony Goins (director of the Nebraska Department of Economic Development) and Josh Davis (associate vice chancellor for global affairs at the University of Nebraska-Lincoln, or UNL) about Nebraska’s growing relationship with sub-Saharan Africa. They discuss Nebraska’s robust agriculture sector and deepening ties with the region in the areas of human capacity and development as well as private sector partnerships. Tony, Josh, and Judd also take a close look at the alignment between the Nebraskan state government, UNL, Nebraskan and African companies and organizations, and even the U.S. and African governments that is so critical in making these ties flourish.

Judd Devermont: Why is Nebraska seeking partnerships with Africa in general, and with Rwanda in particular?

Tony Goins: We are an agriculture state, and our agriculture-related expertise runs extremely deep here. There are a lot of family farmers with large farms here in Nebraska. Typically, we are ranked number one or number two in terms of beef exports in the United States, and we rank very high in terms of corn and soybean exports.

We've got great logistics and distribution infrastructure, and that's really thanks to the centralization of where we are located, as well as our great rail lines. And then the bottom line is, and I can attest to this, we are one of the most welcoming states for immigrants in the United States. When you look at agriculture and what we call “agritech” [agriculture technology], the ties are very strong, and I think we have a real opportunity to build that relationship.

Josh Davis: Nebraska is a state that cares deeply about global engagement. We also care about the health of both rural and urban communities, which are major issues not only in sub-Saharan Africa, of course, but here in Nebraska as well. We think it's essential from the perspective of UNL to be preparing our students to be working and living and serving in an interconnected world.

We also want to be positioning our faculty members and others to work on grand challenges, whether it be employing growing youth populations or increasing trade and investment with Africa. As a large university, UNL has people doing research and working all across the continent. But increasingly we've tried to focus in on a couple of strategic locations, and Rwanda has really emerged as one of those places for us.

There were a lot of things appealing about Rwanda, as many people know, but we were invited to engage there by the Howard G. Buffett Foundation, where they continue to make significant investments. That's really what focused our efforts on Rwanda. We've been growing those investments over the last five or six years.

Devermont: Something notable about what's happening in Nebraska is that you have a coordinated approach, or at least you've got a center of gravity between the state government, the city government, UNL, and private foundations. That’s complemented by the Nebraska National Guard’s partnership with the Rwandan military. What is the value of having different institutions and governments working together in a focused way with one country?

Goins: Well, I think it creates a real high level of alignment. I think it allows us to really be on the same page in terms of what we want to accomplish. Here in Nebraska, we truly promote African culture. We promote diversity; we promote empowerment. There are a number of notable organizations driving these initiatives, including the African Culture Connection founded by Charles Ahovissi. They teach African dance and put on a lot of workshops, presentations, school residencies, and afterschool programs.

Then there's the Leadership Africa Summit, which I will be participating in this year as a speaker. That's founded by Marco LeRoc, and it's an annual gathering of young professionals, African leaders, entrepreneurs, and people that cherish African culture. I'm looking forward to being a speaker, talking about Nebraska, and why Nebraska is a great place to continue to assimilate and talk about the partnership between Nebraska and Africa.

Nebraska is also home to the Midlands African Chamber of Commerce, led by lawyer Karine Sokpoh. This chamber promotes and fosters business growth and economics in the African community, which is something that the Department of Economic Development is extremely focused on. In addition, members of the Governor’s Council for International Engagement have expressed hope that the United States can continue with free trade negotiations on the continent.

Davis: Cities and states are increasingly engaging directly in international relations, and in our interconnected world it's increasingly important that they do so. Their interests are tied to these relationships for trade, workforce development, and representation of their own populations. That's been happening across Asia for a long time, and I think we're beginning to see more of that happen in Africa. As a public and land-grant institution, UNL not only works in the mission areas of education, research, and service, but we also want to be of direct benefit to our state and to the citizens of Nebraska when it comes to building economic partnerships.

Devermont: What do you see as the future priority partnership areas for both the Nebraska state government and UNL?

Goins: I think we’ll continue to focus on agriculture. There are a number of Nebraskan agricultural companies operating manufacturing facilities on the continent, primarily in northern and southern African countries. We also have irrigation systems from Nebraska that have been used on the continent for decades. This is something we want to continue to build. Exports are a really important driver for the Nebraska economy. We've spent a lot of time in Asia, and we see a real opportunity for us to grow in Africa. When you look at Africa, they're also steeped in technology. There are just a lot of similarities between Nebraska and the continent, and we're going to continue to grow those.

Davis: When I think about partnerships, the way UNL is working in Africa falls into two main buckets: (1) human capacity and development and (2) private sector partnerships. With regard to human capacity and development, we’re engaging young people on these grand challenges in water and food security and youth employment, and we’re increasingly working with the federal government through the U.S. Agency for International Development and other partnerships. With regard to private sector partnerships, we’re working on deploying the equipment of Nebraskan agriculture companies effectively or pivoting education to the partners that they’re working with on the ground in Africa.

Devermont: How do others learn from the Nebraska success story? And what commitments do you need on the African side to make these partnerships work?

Davis: I'll use Rwanda as an example. One of the reasons why I think there's been a lot of success there for us is because the Howard G. Buffett Foundation already has deep ties there. That is a huge takeaway from the Nebraska success story: work with partners, both U.S.-based and African-based, who have preexisting connections to the region.

With regard to commitments from the African side, we are working with the government of Rwanda, which is very results driven. They have a clear strategic vision and action plans. Working with those two partners in particular [the Howard G. Buffett Foundation and the Rwandan government] means that as a university, we don’t have to bring everything to the table. We've been really able to focus our efforts on what we're good at. That's education, research, and engagement, and we haven't had to take on too much that is outside our comfort zone.

Goins: Relationships really do matter. States, cities, and universities need to understand what they already have in their communities that can help you establish those relationships. We've got a coffee company in Grand Island called Zabuni Coffee that sources Kenyan coffee and is led by Laban and Cora Njuguna. We've been able to establish a really great relationship with Zabuni Coffee, to the extent that they've helped bring some delegates from Kenya to Nebraska. 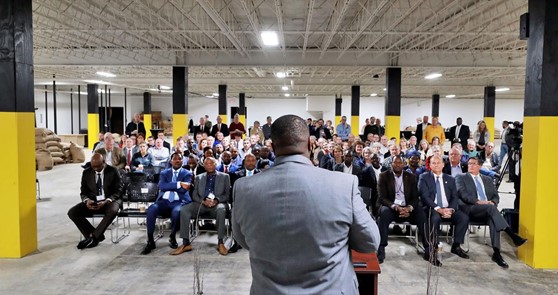 We're looking to expand that relationship. The biggest takeaway from the Nebraska success story is that you need to cultivate those kinds of relationships because when you do, you create trust. Trust is really the foundation of any type of relationship, especially when you have cultures that are very different. In order to cultivate that trust, you have to spend some time together. You want to invite folks from the African continent here, and also put on a lot of trade missions to the continent.

Devermont: Is there assistance or support that you would like to see from the U.S. federal government to enrich and drive what you're already doing on the ground?

Davis: There are a couple ways that UNL has engaged the federal government that I think have been really helpful. One of the examples is that we're part of the State Department's University Partnerships Initiative. The former assistant secretary of state for African affairs launched that initiative last year. I was lucky enough to speak at the opening of that. We're engaging both in Rwanda, on a program to increase capacity around higher education administrators and their ability to manage international partnerships, as well as in Senegal, building capacity in STEM.

That specific support and funding from the State Department has been a really good example. Also we've hosted now several cohorts of the Young African Leaders from the Young African Leaders Initiative through the Mandela Washington Fellowship, and Director Goins was a mentor in that program. Those have been great ways for us to engage not only some young people, but also universities and other partners on the ground. They have come alongside UNL and supported some of the work that we had already started.

Goins: I'm glad you brought up the Mandela Washington Fellows program because I was asked to be a mentor in that program before I started as director of the Department of Economic Development. It had a profound impact on me. I was supposed to be the mentor, but I think I got mentored. It was absolutely amazing. I had never in my life seen such young, vibrant talent. These are full-fledged young business leaders who are just absolutely brilliant. I truly see that Mandela Washington Fellows program as a large lever that we should continue to expand. Because when they come to Nebraska, they go back to Africa as our disciples.