The Biden Administration: Strategy and Reshaping the National Security Budget

The Biden administration and the U.S. Congress face major challenges in shaping an effective FY2022 defense budget. These challenges include the immediate need to create a suitable FY2022 budget proposal – a task the administration must complete no later than April – and to determine what work must begin in order to address the longer-term issues in defense budgeting as part of the FY2022 submission.

This analysis, however, focuses on the need for fundamental reforms in the defense budget’s structure and content, the challenges posed by the rising costs of mandatory civil spending and Covid-19 aid, as well as the need for a full national security budget. It addresses the three areas where such reforms are critical:

In the process, it shows that the Biden administration needs to look far beyond the coming fiscal year and to make major reforms in the ways that the defense and national security budgets are structured, reported, and justified – and particularly how they should be used to develop and implement an effective national security strategy.

A Budget Driven by Military Service Shopping Lists rather than Strategy

The present U.S. defense budget process has many critical flaws. The most important flaw is that the budget submission and the review process are now driven by the shopping lists of the military services and key elements of the Department of Defense.

This does not present a budget that reflects a strategy at the joint and command levels, justifies the funding of the joint military’s needs in key regions or in key functional areas of defense, or uses key analytic tools like net assessment and meaningful program budgeting.

The focus on the spending of each military service ignores the fact that the U.S. is now committed to joint/all-domain warfare and that the U.S. shapes its defense and national security strategies largely in terms of its regional and functional military commands, its strategic partnerships, and the need for foreign aid to the civil and law enforcement sectors of other countries.

Aside from the broad rhetoric about strategic intentions, the defense budget submission does not address these critical aspects of defense. It focuses almost exclusively on the service by service details of planned spending – consistently failing to control the rise in personnel and operations and maintenance (O&M) costs as well as also failing to deploy key procurement programs at the estimated cost and time along with the promised effectiveness.

It is at best a mid-20th Century budget for a very different 21st Century. As a recent report by the Director of Operational Test and Evaluation notes,1

We are now 20 years into the 21st century but, in many ways, DoD acquisition functions appear to be stuck in the 20th century. Our processes are too slow. By the time many of our systems roll off the production line, the requirements against which they were designed are decades-old and no longer capture the threat or warfighter needs. With our near-peer adversaries rapidly gaining ground, and even getting ahead of us in certain areas, continuing along this path is dangerous!

The current budget also reflects the virtual collapse of any effort to create a meaningful posture or a working planning, programming, and budgeting system (PPBS). Key budget reforms made under the Eisenhower and Kennedy administrations have largely collapsed, and new reforms have not been implemented.

There are many reasons for these failures, but the broader causes include the collapse and break-up of the former Soviet Union in the early 1990s. They include the poorly structured efforts to create the Quadrennial Defense Reviews from 1997 to 2014 that tried to look too far into the future and were decoupled from programming, planning, and budgeting efforts. They include the narrow focus on terrorism and extremism that occurred in 2001, the reaction to the Great Recession of 2008, and the absurdities in budgeting imposed by the Budget Control Act of 2011 that led to budget caps and sequestration efforts.

More recently, they have included the failure to link the broad strategic rhetoric in the new National Security Strategy (NSS) and National Defense Strategy (NDS) that were issued in 2017 and 2018 respectively, to tangible plans, programs, and budgets in the budget submissions that followed. They have also included a growing emphasis over the last four years on worst case war fighting with China and Russia; withdrawals from overseas bases; and a self-seeking focus on burden sharing, arms sales, and transactional relations in dealing with strategic partners.

In spite of recent claims that the recent defense budgets have been “strategy driven,” they have actually been driven by each military service, focused on the coming or current fiscal year, and often provided little more than placeholder estimates for spending in future years. They have remained exercises where broad, global strategic rhetoric has rarely been linked to any form of substance.

This report addresses these issues in detail and suggests major reforms in  the current defense budget process. It also highlights the need for reform in the related problems caused by separating the defense budget from the broader pressures on the federal budget – created by mandatory Social Security and health programs – and from the entire national security budget, including Veterans Affairs, DHS, the State Department, and civil U.S. intelligence agencies.

The analysis calls for a return to an effective planning, programming and budgeting system; a focus on the major combatant commands as key “programs” that can be clearly linked to key strategic needs and challenges; and a focus on the Future Year Defense Program (FYDP) rather than simply the budget for the coming fiscal year.

It addresses the ways in which defense planning and budgeting have steadily declined in quality and coverage and in which there has been minimal real-world progress in tying the defense budget to an overall national security budget. Much of the progress in creating an effective planning, programming, and budgeting system (PPB) that began under the Eisenhower and Kennedy administrations has been lost. At the same time, the outside need for a defense budget reform has steadily increased.

At the same time, the analysis shows that the defense budget process is largely decoupled from the analysis of the overall trends in federal spending. Changes in taxation and economic policy over the last four years have greatly increased the deficit and federal debt that they were intended to reduce.

Finally, the analysis focuses on the need to properly plan and budget all national security spending – including spending in the civil sector. It addresses the need to consider the full range of national security spending – including for Veterans, the Department of Homeland Security, and intelligence agencies. It also addresses key issues regarding continuing management of key program activities within the Department of Defense (DoD).

It calls for a real analysis of total national security spending and for a true effort to create a whole of government approach that integrates military, internal security, and civil aid efforts. It provides a case study summary in the failure of U.S. efforts to do this in the cost planning of the wars in Iraq/Syria and Afghanistan as well as in the failures of the current planning, programming, and budgeting systems in the Department of Homeland Security, the Department of State, the U.S. intelligence agencies, and the smaller efforts in other government departments and agencies

Because of the complexity of the data involved, the analysis is available in two forms. The first version is in a purely narrative form. It is entitled, The Biden Administration: Strategy and Reshaping the FY2022 National Security Budget , and it is also available on the CSIS website at https://csis-website-prod.s3.amazonaws.com/s3fs-public/publication/210216_Cordesman_Security_Budget.pdf.

The second form has the same narrative content, but it provides a wide range of supporting data. These data are complex; often contradictory or uncertain; and – to put it frankly – have to be provided in the visual form of charts, graphs, and spreadsheets. It takes time and patience to compare and understand them. They do, however, provide far clearer illustrations of the key issues involved.

The data in this PowerPoint version are drawn largely from official U.S. government reporting, and it provides a detailed quantitative picture of the failures and uncertainties in today’s approach to defense budgeting as well as calls for major changes and reforms.

The end result is the equivalent of an e-book, which is available on the CSIS website here.

The Table of Contents for both reports has the following structure: 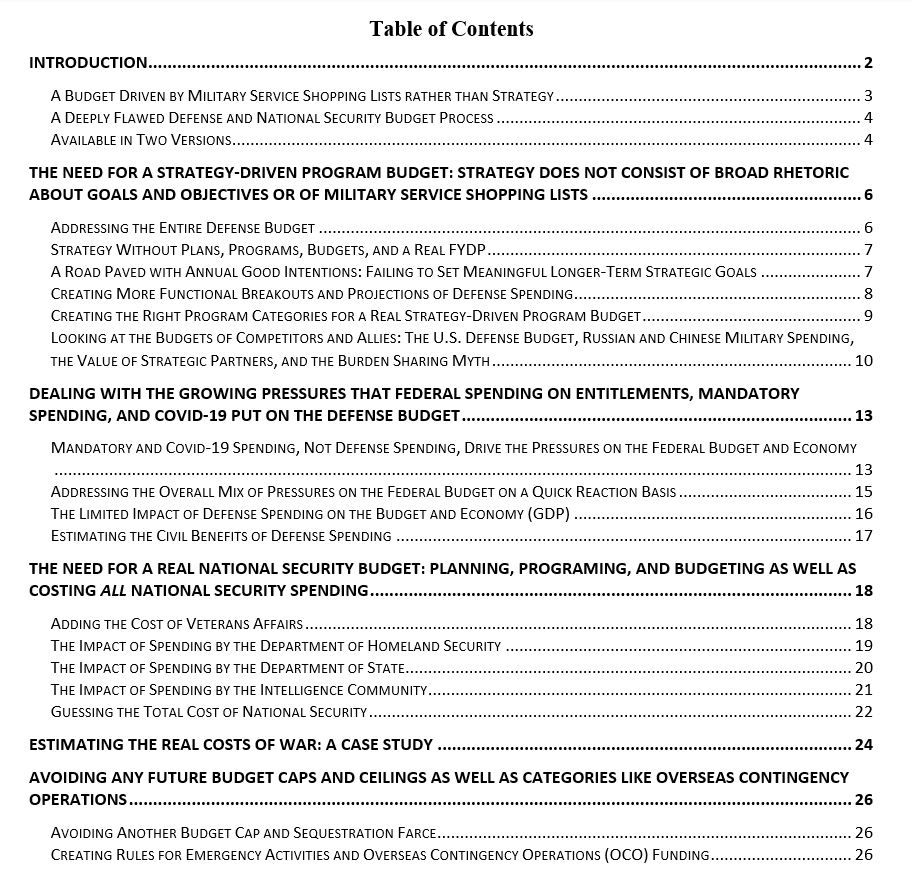