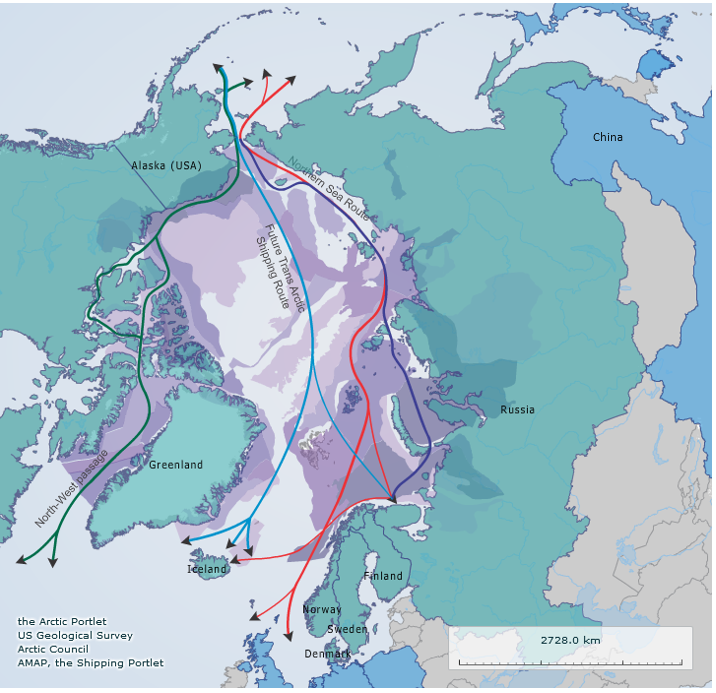 China’s interest in the Arctic seems to be driven by potential energy, commercial, and geopolitical benefits, but each comes with a caveat. First, the region has a wealth of energy and natural resources, boasting roughly 13 percent of the world’s undiscovered crude oil and 30 percent of undiscovered natural gas. While these oil and gas deposits are locked away under the Arctic seabed by thick ice sheets and harsh weather, the steady retreat of sea ice has paved the path to viable future extraction efforts. At present, China’s most significant link to the Arctic is through the Russian Yamal Liquified Natural Gas (LNG) project, in which Chinese companies hold stakes and provide significant financing. For its participation, China has secured long-term offtake of LNG from the project amounting to approximately 195 billion cubic feet per annum (or 4 million tons per annum). However, the appeal of Arctic oil and gas to global markets is subject to the cyclical nature of global oil and gas markets, as well as the future of other supply sources, including U.S. unconventionals. Arctic resource extraction remains difficult and expensive owing to the harsh climate, limited infrastructure, distance to manufacturing centers, and environmental sensitivities. These issues, which have hindered past onshore projects in Northern Russia and Alaska, will likely present even greater challenges for future offshore energy development efforts in the Arctic given adverse maritime conditions.

Second, the commercial attraction of the Arctic routes is in shipping expediency. The two primary paths, the Northwest Passage (NWP) and Northeast Passage (NEP), provide faster alternatives to direct European and North American energy goods to China, shaving weeks off popular routes such as those out of Rotterdam. A third Arctic passage, the Transpolar Sea Route, cuts through the Arctic between the NWP and NEP through international waters but can only be accessed by the heaviest icebreaker ships. In general, the reduced shipping times would mean lower fuel costs and emissions. However, with the exception of the North Sea Route portion of the NEP, the majority of Arctic routes have poor infrastructure and search and rescue capabilities. Other barriers, such as increased insurance premiums and variable seasonal conditions, may deter increased volumes of trade through these routes until decades later.

Third, the ability to transit through Arctic waters may enhance the security environment for Chinese ships. The NEP provides an alternative trade lane through North Sea Route waters within Russia’s Exclusive Economic Zone that circumvents the maritime choke point at the Strait of Malacca, as well as pirate-infested waters, such as the Red Sea and Indian Ocean. Such security risk is marked poignantly by the pirate attack on Chinese-owned COSCO Asia in the Suez Canal in 2013, while its sister ship, the Yong Shen neared the end of its voyage to become the first Chinese cargo ship to transit the NEP.

Lastly, China may see more active commercial and energy presence in the Arctic as means to strengthen its geopolitical and geoeconomic posture. For example, potential shipping routes through Arctic waters would offer Chinese vessels the ability to circumvent the widely used paths to China from Europe that pass through the Suez Canal or around the Cape of Good Hope where the U.S. Navy has long been dominant. Additionally, the white paper aligned China’s Arctic development goals with those of the Belt and Road Initiative. The bulk of Chinese investment is currently directed toward expanding southern shipping capacity, rail, and pipeline infrastructure. Whether China intends to spend resources on developing infrastructure along the Polar Silk Road that will parallel its infrastructure undertaking elsewhere will warrant close attention.

To dispel rising Western concerns over the implications of Chinese pursuit of various opportunities in the Arctic, China’s vice foreign minister stated at the time of releasing the white paper that “it is completely unnecessary to doubt our intentions or worry about plundering of resources or destruction of the environment.” The Arctic offers abundant resources, as well as commercial and geopolitical incentives, suggesting that the region could become a Chinese development hot spot. It may, however, be only a small piece of the larger geopolitical narrative China is pursuing as it seeks to be recognized as a responsible major power with growing global reach at a time when the United States is backing away from international commitments.

In the coming week, the CSIS Europe Program will publish a report on China's new Arctic Strategy outlining China's ambitions and the implications for the region. The report is the product of the third annual U.S.-China Arctic Social Science Forum, a three-day Track 1.5 dialogue between Chinese and U.S. Arctic experts.


More on the Arctic, China, and Oil and Gas Production from CSIS

U.S.-Sino Relations in the Arctic: A Roadmap for Future Cooperation
January 30, 2017

The Belt and Road Initiative: Energy and Geopolitics
June 19, 2017

Building Blocks for a Hydrogen Economy
November 16, 2021
View all content by this expert