Sunday’s gubernatorial elections reconfirmed that Venezuela’s democracy cannot be restored by constitutional means. The current regime is led by a corrupt cabal unwilling to give up its concentrated power, after causing an unprecedented humanitarian, economic, and political crisis. Under unfair and nontransparent election procedures, the National Electoral Council—Consejo Nacional Electoral (CNE)—announced, despite multiple polls predicting the reverse, that pro-regime governors had won two-thirds of all seats. As the opposition challenges the results, Venezuelans and the international community are asking the same question: how can we help restore democracy in Venezuela?

President Nicolas Maduro and his inner circle increased their authoritarian control in a National Constituent Assembly illegitimately chosen on July 30. The hand-picked representatives, including Maduro’s son and closest inner circle, self-proclaimed unlimited authority to legislate and remove officials. The assembly kicked off its reign by abolishing the political rights of opposition leaders and precipitously calling for gubernatorial elections under rigged rules.

Venezuela’s crisis entered a new phase when street protests vanished and the opposition’s stamina plummeted. The rogue National Constituent Assembly has been backing Maduro’s moves toward further dictatorship and human rights violations. On the other hand, the international community is nearing a consensus that restoring stability and renewing democratic institutions in Venezuela should be a priority. However, given the cartel-like regime that is Maduro’s government, international pressure will not suffice unless it coincides with domestic pressure.

Assuming democracy cannot and will not be restored under the current regime, the following domestic and international forces should be part of a foreign policy strategy to help Venezuela deal with its crisis. 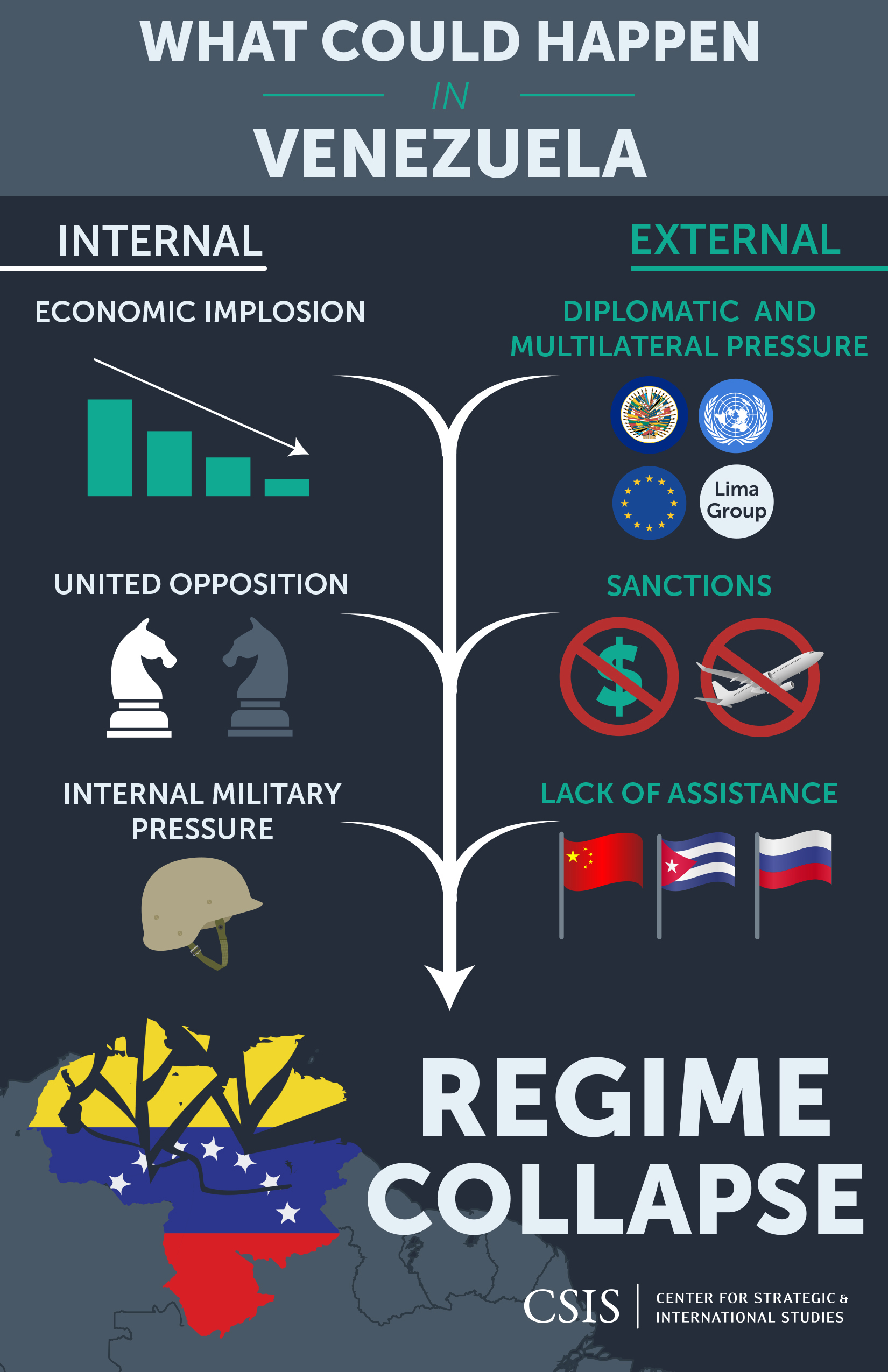 The Republic’s Economy and Financial Health

The regime’s real enemy remains the economy. As street protests dissipate, the consequences of mismanaged economic policy are more evident than ever. The International Monetary Fund (IMF) predicts that the inflation rate will increase to over 2,000 percent in 2018. National reserves are lower than $10 billion for the first time in two decades, mostly in noncash assets. Oil production has plummeted by more than 25 percent, going from 3 million barrels per day (bpd) in 2000 to an estimated 2.2 million bpd in May 2017. This impacts the government’s fiscal revenues as oil exports comprise more than 90 percent of total exports. Meanwhile, Maduro’s government is running out of money as large debt payments loom: Venezuela owes nearly $4 billion for the rest of this year, and over $8 billion for next year. Unless the regime receives external assistance (e.g., loans from China and Russia) or cuts imports further (already at historic lows under $10 billion), deepening the humanitarian crisis, default is inevitable.

If Venezuela defaults, the regime would face multiple consequences from financial stakeholders around the world, precipitating its collapse. International sovereign assets would be frozen and managed, if filed, through U.S. bankruptcy law. This default scenario has the potential to force the regime’s collapse, but it is not sufficient.

Fragmentation within the opposition is only helping the regime. A transparent, united, and consistent opposition is urgently needed today and during a “Day After” scenario. The Democratic Unity Roundtable—Mesa de la Unidad Democrática (MUD)—an opposition multiparty coalition since 2009, decided to participate in Sunday’s regional elections. That participation, along with attempts to start a new dialogue with the regime, have greatly impacted its credibility with the people. Given the collapse of institutions and rule of law, copious human right violations (more than 120 protesters killed, 2,000 injured, and a handful in prison since April of this year), the illegitimate National Constituent Assembly and the deep humanitarian crisis that is affecting all Venezuelans (except for those in power) means that any negotiation or dialogue that doesn’t seek a profound political transition would be meaningless.

Building a strong alternative to Maduro’s regime is a necessary condition to increase internal pressure. The Venezuelan opposition, even in a post-Maduro scenario, needs to ensure that it is prepared for a “Day After” in Venezuela. It must be able to guarantee to international key actors, including the United States and China, that it is willing to implement policy reforms and accept humanitarian relief while seeking economic stability and rule of law. The roadmap given on the historic July 16 referendum by more than 7 million people (almost half of the electorate) is a good start. It includes dismantling the illegitimate Constituent Assembly and immediate and transparent national elections to form a government of national unity.

Pressure by the domestic military forces is crucial to the Maduro regime’s collapse. The level of frustration within the military is increasing as the humanitarian and economic crises deepen. The possibility of the armed forces shifting their loyalty away from the regime would depend on the degree of internal stability that Maduro can maintain and the degree and type of external pressure or assistance the regime receives from international actors. Increased international sanctions and a consistent and united opposition are the key driving forces behind such a change.

The international community, including the Lima Group (a coalition of 12 regional countries), is working to create and transmit a unified message. The Organization of American States (OAS) and the United Nations should be encouraged to bring additional diplomatic pressure against the regime. The European Union has announced approval for its own sanctions after consensus from its 28 member states. Sustained bilateral pressure is needed. Again, diplomatic pressure, either multilateral or bilateral, is necessary but not sufficient when dealing with Maduro’s regime. A combination of diplomatic pressure and cutting off access to international financial markets and external assistance to the Maduro government is essential.

Isolating the regime could follow two scenarios: (1) one or more international actors (e.g., Russia or China) might continue to assist and support Maduro; or (2) Maduro loses all international support, precipitating Venezuela’s default and the regime’s downfall. Therefore, the international community must also apply diplomatic pressure not just to Venezuela, but also to countries that come to Maduro’s aid.

The Role of China, Russia, and Cuba

When looking at resolving the Venezuelan crisis, we must consider China’s economic and geopolitical interests, along with Russia’s commercial and oil relationships and Cuba’s political assistance. China has given more than $62 billion in loans to Venezuela in the last 10 years, more than all the multilateral institutions combined. Though China might have a strategic interest in continuing to support an anti-U.S. government in the region, it would also benefit from a transition in Venezuela if a new government brings economic stability, the rule of law, and a respect for previous treaties and bilateral loans.

Venezuelan engagement with Russia ranges from arm deals to visa reciprocity agreements and oil-production agreements. Russia will also play a role when restructuring Venezuela’s sovereign debt. Rosneft, the Russian oil company, owns 49 percent of CITGO, the Petróleos de Venezuela, S.A. (PDVSA) oil subsidiary based in the United States. Despite the fact that Russia doesn’t have the financial flexibility to keep the regime afloat, it plays an important role in the international arena, especially as part of the UN Security Council. Cuba, on the other hand, is the political mentor of the regime and Venezuela’s closest ally. Thousands of Cubans reside in Venezuela, either through medical assistance programs or military and intelligence efforts. Eliminating assistance to the Maduro regime from these three countries is key.

Current and additional sanctions remain necessary as they further limit the regime’s access to financial assistance that supports its unlawful activity. While U.S. sanctions targeting the government and PDVSA mean that issuing new debt is difficult in Caracas, the regime usually gets help from the outside in order to make debt payments on time. U.S. financial and economic sanctions targeted at the regime’s leadership would be stronger and more effective if replicated by countries in the hemisphere and beyond. The European Union and other regional countries need to fast-track their own sanctions.

Countries around the world should work together on increasing pressure. A combination of further sanctions to limit the regime’s financial networks, diplomatic and multilateral pressure, the return of public protests, and a consistent organized opposition that offers a recovery plan for Venezuela are essential. The threat to impose sanctions is as important and impactful as the sanctions themselves.

Venezuelans are trapped in their own country. As last Sunday’s elections showed, under the current dictatorship it does not matter who votes, but who counts the votes. The fact that government and military officials are intimately involved in drug trafficking and money laundering, among other criminal activities, including human right violations, makes it harder for the regime to pull back its dictatorial activities. Hosting free and fair elections, dismantling the Constituent Assembly, or releasing political prisoners would undermine the regime’s permanency in power. Many in Maduro’s inner circle worry that backing down and giving up power directly threaten their prospects for living free of jail cells, their familial stability and lavish way of life, and their illegally acquired assets.

Although there is no silver bullet to resolve the Venezuelan crisis, a resolution is made harder if domestic and international forces are not aligned. The driving forces described above need to coincide in strength and time to halt the implosion of Venezuela.