Assam is the most populous and economically active of the northeastern states and thus acts as the nexus between the mainland and the northeast. Due to insurgencies and armed conflict spanning several decades, Assam struggled to deliver many basic services to its citizens, including electricity, and failed to attract major industries. Coupled with the state’s unique topography of Himalayan foothills, forests, and a massive floodplain dominated by the mighty Brahmaputra River, infrastructure development in the state has not been easy. However, with the settling of several conflicts, the state is poised to be the economic engine of India’s northeast and take its place as India’s gateway to southeast Asia. To do so, it is focusing on agriculture, led by a thriving tea industry and energy resources—the state accounts for 15 percent of India’s total crude oil and 50 percent of onshore natural gas output.

On the power sector side, Assam has increased the share of its population with electricity access from 44.57 percent in 2015 to 100 percent in 2019. An important measure of the health of the state’s electric power sector is aggregate technical and commercial losses (AT&C), which measure line losses from transmission and distribution equipment, power theft, billing and collection inefficiencies, and customers’ inability to pay. Assam’s AT&C losses in 2015 were 24.2 percent. Under the state’s Power for All plan formed with the central government, the state’s utility Assam Power Distribution Corporation Limited (APDCL) would target AT&C losses of 18.15 percent in 2019. As of August 2019, this goal has virtually been met—APDCL’s AT&C losses are currently 18.2 percent.

Under the central government’s Ujwal Discom Assurance Yojana (UDAY) scheme, which aims to improve the financial health of the country’s utilities, Assam has a target of 150,000 smart meters for customers with monthly consumption between 200-500 kilowatt-hours (kWh) by December 2019. As of August 2019, the state has deployed 15,567 smart meters for these customers, 10 percent of its goal. The state also had a target to deploy 31,000 smart meters for customers with monthly consumption of over 500 kWh per month by December 2017, but to date has only deployed 11,881 smart meters, 38 percent of its goal.

Assam has a target to install 663 megawatts (MW) of solar power in the state to contribute to the central government’s target of 100 gigawatts by 2022. As of May 2019, data from the Ministry of New and Renewable Energy indicate it has installed 22.4 MW, 3.38 percent of its goal. 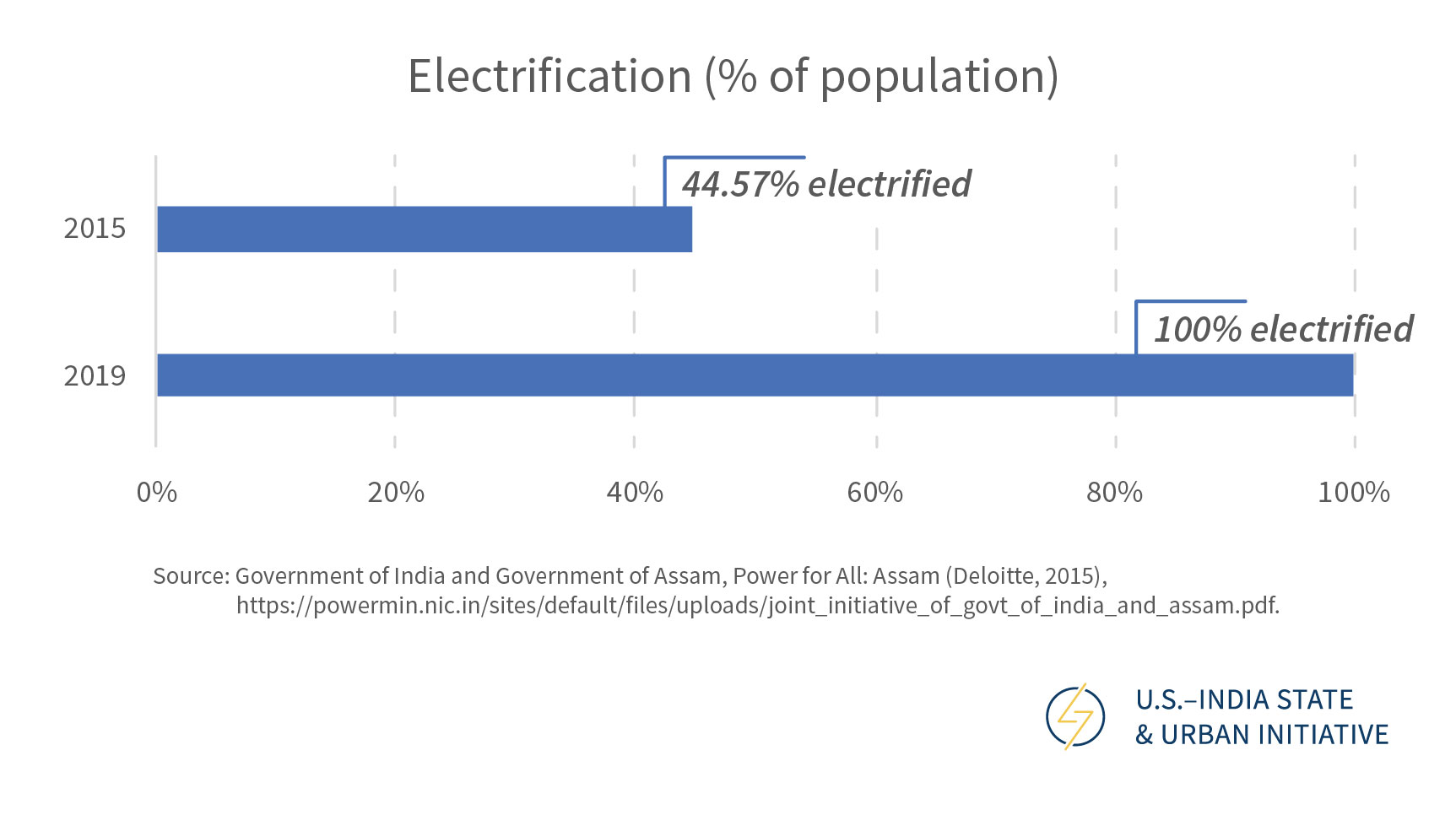 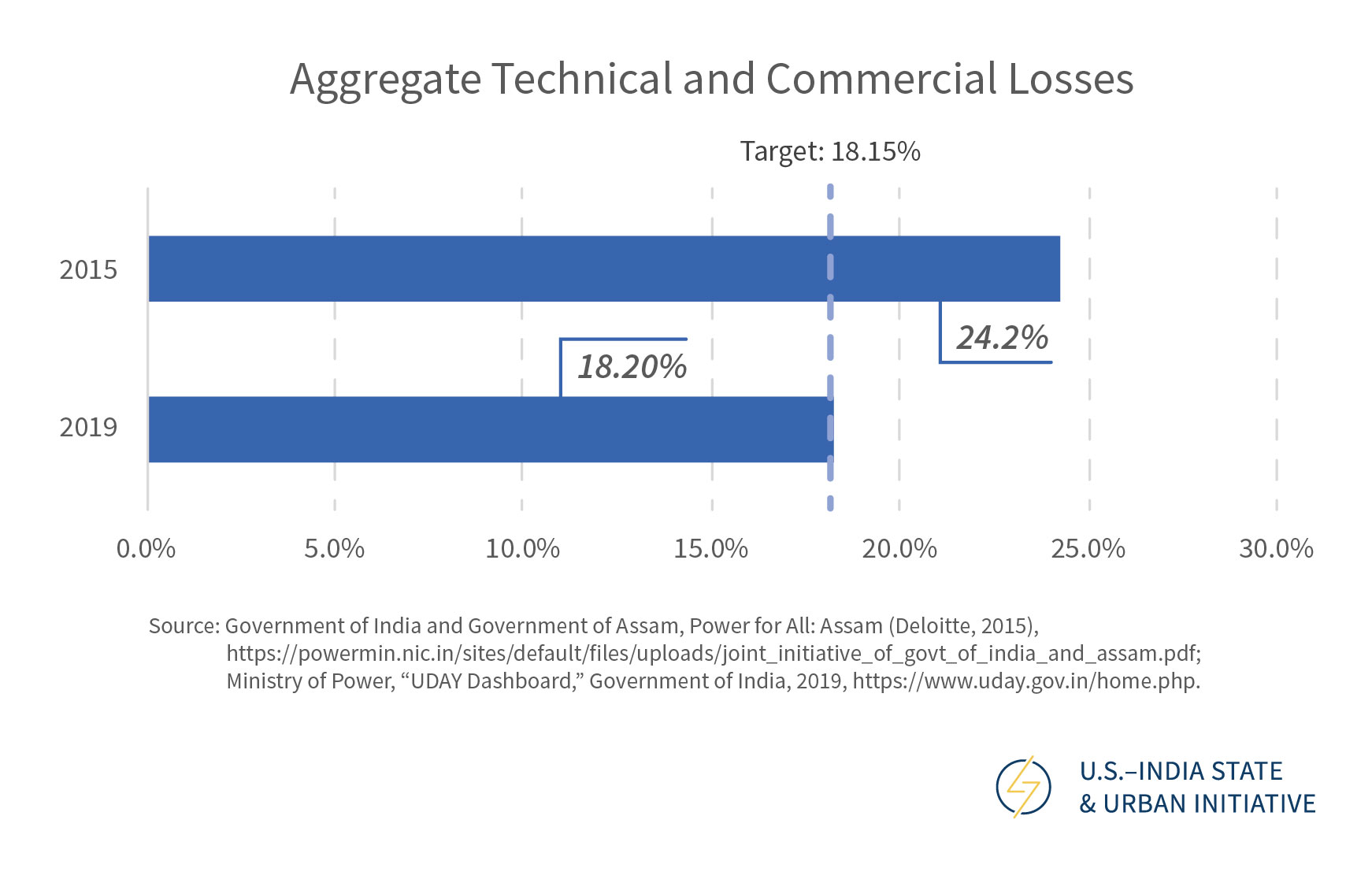 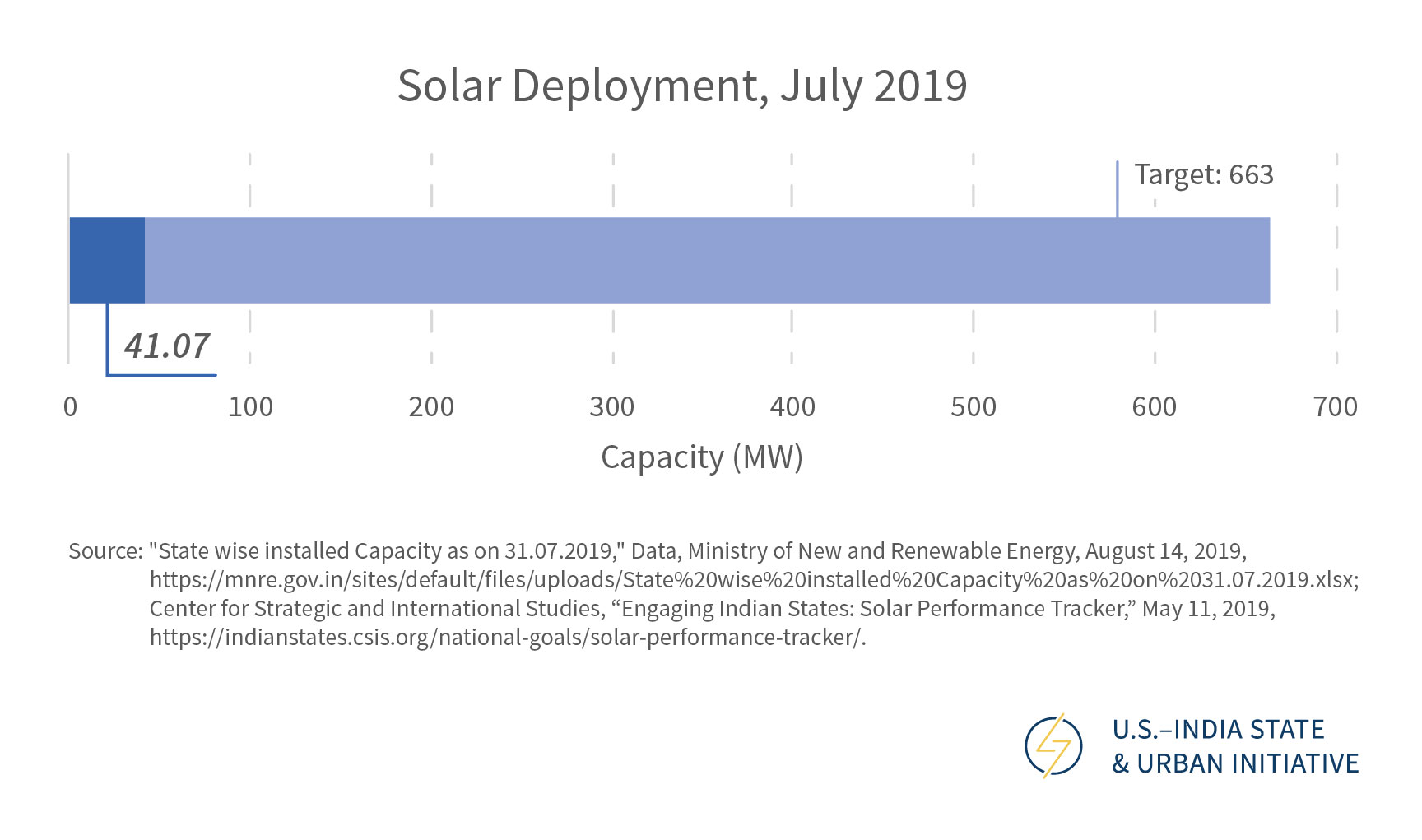 Over the past few years, Assam has focused on maintaining its coal and natural gas-fired power while also deploying solar generation and developing alternative transport and cooking fuels.

In June 2017, Assam Gas proposed a buildout of a 450-mile gas pipeline from Bihar to Assam to meet increasing demand from industrial customers. In May 2018, Assam Power Generation Corporation Limited partnered with gas turbine maker Wartsila to replace an aging gas plant with 70 MW of new turbines. The central government-run NTPC announced in December 2018 that it would add 250 MW of capacity to its coal-fired power plant in the Kokrajhar district.

The Assam Power Distribution Company and NTPC have pursued both utility-scale and rooftop solar deployment in the state, including an 85 MW utility-scale auction in June 2018, a 900 kW rooftop auction at a thermal power plant in October 2018, a 70 MW utility-scale tender in January 2019, and a seven MW rooftop tender at social and institutional buildings in March 2019.

While not directly related to the power sector, demand and supply of liquid fuels has a bearing on the state’s overall management and use of energy resources, including especially the transportation sector. Despite being an oil and gas rich state, the government has indicated its willingness to support the growth of the alternative liquid fuels industry. In June 2017, Assam’s Numaligarh refinery signed an agreement to produce biofuels from bamboo imported from Arunachal Pradesh. In October 2018, Assam Petrochemicals Limited introduced a new cooking fuel made from methanol. The fuel releases less air pollution than liquefied petroleum gas (LPG) when burned, is safer than LPG because it does not explode when it combusts, and it is cheaper for consumers.

To follow the reforms and initiatives in Assam’s power sector, please visit: https://indianstates.csis.org/states/assam/.

In September 2017, Prime Minister Modi announced the Saubhagya Scheme, an ambitious effort to provide electricity to the 40 million households who still lacked access. The government announced the completion of the initiative in early 2019. After the Saubhagya Scheme, Assam has connected 100 percent of its population to power. Now, the government must assure that every customer has access to reliable, uninterrupted power. The most pressing issue Assam faces is a shortage of workforce capacity. While the Assam Energy Development Agency has no shortage of ideas about how to deliver electricity to customers—developing small-scale wind power and the research and development of micro-hydro systems, for example—the agency only has 17 employees. In addition, the state’s agencies have too few technicians to patrol and keep up with the maintenance needs of a recently expanded service area as a result of the Saubhagya Scheme. APDCL, the state’s utility, only has 158 subdivision officers responsible for bill collection and maintenance of the infrastructure for 26,500 villages in Assam. At the time interviews were conducted, APDCL was in the midst of issuing orders for a surge of hiring to help meet its capacity gap.