‘Fort Trump?’—Is There Added Value to a Permanent U.S. Military Base in Poland?

Establishing a permanent U.S. military base in Poland may be attractive to the Polish government, but it is unclear how it would increase the U.S. national security interests or enhance the North Atlantic Treaty Organization’s (NATO) deterrence and defense posture. On the contrary, a permanent presence may erode NATO’s cohesion and divert investment from priority areas.

During his September visit to Washington, President Andrzej Duda of Poland informed President Trump that Poland was willing to provide $2 billion to establish a U.S. permanent force presence (preferably division-sized) in Poland. Poland has advocated openly for increased U.S. military presence on its soil dating back to the George W. Bush administration, but this new tactic of offering cash for troops represents an overtly bilateral and transactional approach. While most commentators focused on President Duda’s suggestion of naming this permanent base “Fort Trump,” the issue of a permanent U.S. and NATO military presence in Central Europe and the Baltic states is worth assessing in light of both the political and military benefits and risks.

The United States and other NATO allies’ have regularly rotated forces to Poland in support of training and exercises since Poland joined the Alliance in 1999. In the aftermath of Russia’s illegal annexation of Crimea and military incursion into the Donbas in September 2014, NATO approved the Readiness Action Plan, a package of measures designed to increase the readiness and responsiveness of the Alliance. These included the establishment of NATO Force Integration Units (NFIUs)—small structures designed to facilitate rapid deployment of forces and assist in training and exercises—in six Central European and Baltic countries (Bulgaria, Estonia, Latvia, Lithuania, Poland, and Romania). Allies also agreed to increase the readiness level of Multinational Corps Northeast, a multinational structure, which was established in 1999 in Szczecin, Poland, and gives it command and control over the NFIUs. At the NATO summit in Warsaw in 2016, allies took an additional major step to strengthen deterrence and defense posture along NATO’s eastern flank by establishing an “enhanced Forward Presence” (eFP) in Poland and the Baltic states consisting of four multinational combat-ready battlegroups of about 1,000 troops each to demonstrate the Alliance’s commitment to collective defense. In addition, NATO established a new headquarters structure at divisional level in Elblag, Poland (Multinational Division Northeast), with responsibility for coordinating activities of eFP battlegroups and established two new NFIUs (in Hungary and Slovakia).

Due to extensive lobbying efforts by the Polish government for a U.S. permanent presence and to the surprise of the Department of Defense, Section 1280 of the National Defense Authorization Act for Fiscal Year 2019 (FY19 NDAA) contained a provision tasking “the Secretary of Defense, in coordination with the Secretary of State” to “report on the feasibility and advisability of permanently stationing United States forces in the Republic of Poland,” by March 1, 2019. This report will contain “an assessment of the feasibility and advisability of permanently stationing a United States Army brigade combat team in the Republic of Poland” and in particular “an assessment of the willingness and ability of the Government of Poland to provide host nation support for such a brigade combat team.”

NATO Unity Is the Greatest Deterrent

What is the operational and strategic value added of such a U.S. permanent presence? Reactions from the Pentagon to the Polish offer have been lukewarm. Defense Secretary James Mattis stated that he was “appreciative of the Polish offer,” but “not willing to say we need it.” Former U.S. Army Europe (USAREUR) commander Lt. Gen. Ben Hodges argued that a U.S. base in Poland is both “unnecessary” and “unfeasible.”

The United States already has a robust presence throughout Poland, to include along the eastern border where the United States is responsible for the eFP battlegroup deployed in Orzysz. It totals over 1,100 soldiers, of which 795 are American (with one Stryker Squadron, with towed artillery, Mobile Gun System, and Anti-Tank Guided Missile platoons). Taken with the heavy armored Brigade Combat Teams (BCT) deployed for heel-to-toe nine-month rotations, under the framework of Operation Atlantic Resolve, there are about 4,000 U.S. troops deployed throughout Central Europe. Other U.S. military personnel are also present in Poland, on a permanent or rotational basis in various structures (see map). 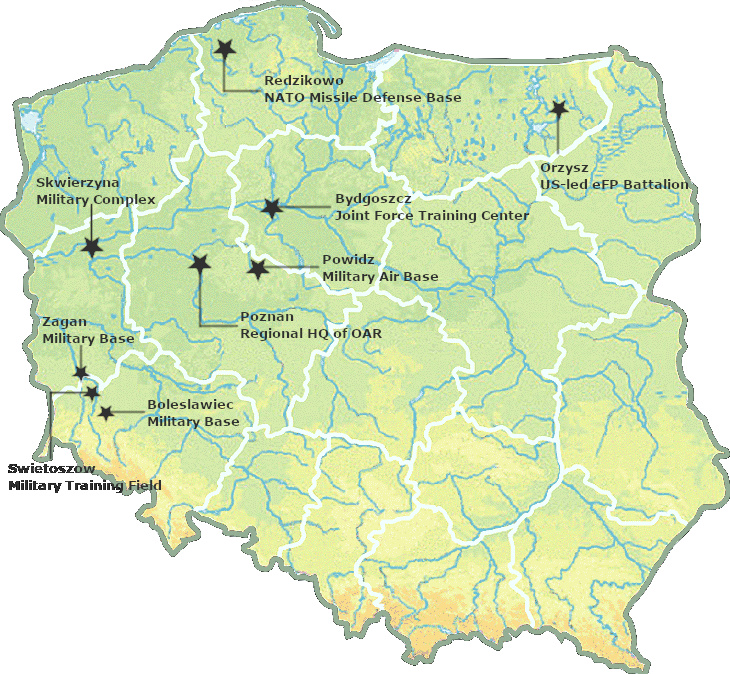 Currently, there are only two US BCTs permanently based in Europe—the 173rd Airborne BCT in Vincenza, Italy, and the 2nd Cavalry Regiment in Vilseck, Germany. In addition to their roles in supporting activities by the United States European Command and NATO, these BCTs regularly support U.S. commitments in the United States Central Command and the United States Africa Command areas of responsibility. USAREUR in Germany has provided U.S. and NATO land forces with world-class infrastructure and training facilities for decades, a vital factor in preserving the readiness of U.S. units for warfighting even as they also conduct theatre security cooperation activities. Additionally, the financial, logistical, and operational challenges associated with relocating one of its only two Europe-based BCTs to Poland would be much greater than any tactical advantage of moving a few hundred miles to the East. If the intent is to increase the overall number of BCTs or to reassign of U.S.-based BCTs to Europe, the U.S. Army would have to identify the forces, and Congress would need to support this, politically and financially. This move would appear to contradict the Trump administration’s demand that Europeans take greater responsibility for their own defense and would likely meet opposition from domestic constituencies who will be reluctant to relinquish the political and economic benefits of hosting a BCT in their state.

A second important consideration is NATO unity. While the United States could take a bilateral decision to increase its force posture in Europe, to be most effective, any U.S. permanent presence must be part of NATO’s overall deterrence and defense posture. As Secretary Mattis has stated, such a decision would have “an impact on the Alliance as a whole,” and should be addressed and considered within NATO. Understandably, Secretary Mattis’ overarching concern is to the need to preserve NATO unity, even if differences of opinion remain as to the applicability of the 1997 NATO-Russia Founding Act (NRFA).

The NRFA states that “in the current and foreseeable security environment, the Alliance will carry out its collective defense and other missions by ensuring the necessary interoperability, integration, and capability for reinforcement rather than by additional permanent stationing of substantial combat forces.” NATO has consistently stated that its actions are consistent with allies’ international commitments, including the NRFA, and most allies agree with the view that they should maintain their international commitments despite Moscow’s repeated violations thereof. Some NATO members strongly argue that the security environment has dramatically changed since 1997 and that Russia’s military actions have voided the NATO-Russia Founding Act. The second stumbling block in the NRFA debate is who defines “substantial” combat forces—NATO, Russia, or both?

NATO’s deterrence and defense posture rests on forward-positioned rotational forces backed by rapid and extensive reinforcement. One advantage of rotational forces is that more nations can take part, including those that are unable to sustain prolonged deployment outside their borders. Rotational deployments also enhance exposure, in turn, building NATO interoperability among the larger pool of rotating units. While NATO will not match Russian conventional forces in sheer force-on-force numbers, its force posture conveys the message that a) there is no room to create a local “fait accompli” without initiating a major conflict with NATO; b) any attack against one ally would mean going to war against all allies—three of whom are nuclear-weapon states; and c) this can only lead to Russian defeat given NATO’s overall military superiority. Due to Russian proclivity for snap military exercises, grey zone tactics, and tendency to exploit Alliance weaknesses, the United States and NATO must retain some geographical rotational flexibility in its force posture.

Rather than focusing on securing a permanent U.S. force presence in Poland, Poland should spend its proposed $2 billion to enable the NATO reinforcement model that all 29 allies have already endorsed. Specifically, the funding should be used to address logistical, legal, parliamentary impediments to greater military mobility across Europe and Poland. Allies must ensure they have the proper infrastructures, organization, personnel, and advanced approvals to allow for seamless movements of troops across borders to enable rapid reinforcement should a crisis unfold. Prioritizing the upgrade of existing Polish infrastructure is the first important step. For example, Warsaw could offer to cover parts of the U.S. funded European Deterrence Initiative (EDI) intended for Poland infrastructure upgrades much like the NATO Security Investment Program does which would enhance Poland’s burden-sharing.

Specifically, the FY19 NDAA allows for $144.4 million worth of investments in Joint Reception, Staging, Onward Movement, and Integration capabilities in Poland—for railroad tracks, ammunition and fuel storage facilities, etc. Poland could cover these costs, freeing up U.S. resources to support more U.S. force deployments, trainings, and exercises in Poland and the region. Interestingly, the FY19 NDAA contained a specific reference, in section 2906, to EDI reading that: “None of the funds authorized to be appropriated for military construction projects outside the United States may be obligated or expended for planning and design costs of any project associated with EDI until the secretary of defense submits to the congressional defense committees a list of all of the military construction projects associated with the European Deterrence Initiative which the Secretary anticipates will be carried out during each of the fiscal years 2019 through 2023.” Polish investment in world-class training ranges and expeditionary airfields such as those that already exist in BCT-hosts Germany and Italy would also help draw more U.S. and allied forces activities to Poland.

The enhanced presence and exercising of NATO combat capable forces throughout Europe is a more credible deterrent and defense than any one bilateral U.S. defense commitment. Poland has been exemplary in modernizing its military and delivering on its commitment to spend 2 percent of its GDP on its defense. Poland can lead the way again by focusing its defense funds on ensuring more rapid NATO deployment to Europe and Poland thereby enhancing U.S. and NATO posture in Europe while at the same time strengthening NATO unity and reducing the financial burden on U.S. taxpayers.

Quentin Lopinot is a visiting fellow in the Europe Program, focusing on European security issues, at the Center for Strategic and International Studies in Washington, D.C.