Four Scenarios for Geopolitical Order in 2025-2030: What Will Great Power Competition Look Like?

CSIS’s Risk and Foresight Group created four plausible, differentiated scenarios to explore the changing geopolitical landscape of 2025-2030, including the potential lasting first- and second-order effects of Covid-19. The scenarios center on the relative power and influence of the United States and China and the interaction between them, along with detailed consideration of other major U.S. allies and adversaries within each of four worlds.

Each scenario narrative was informed by deep trends analysis and subject-matter-expert interviews. CSIS’s Dracopoulos iDeas Lab brought to life the scenarios in four engaging videos designed to test policymakers’ preconceived notions about the defense and security challenges facing the United States and its allies in the second half of this decade. This research was sponsored by the Defense Threat Reduction Agency’s Strategic Trends Division. 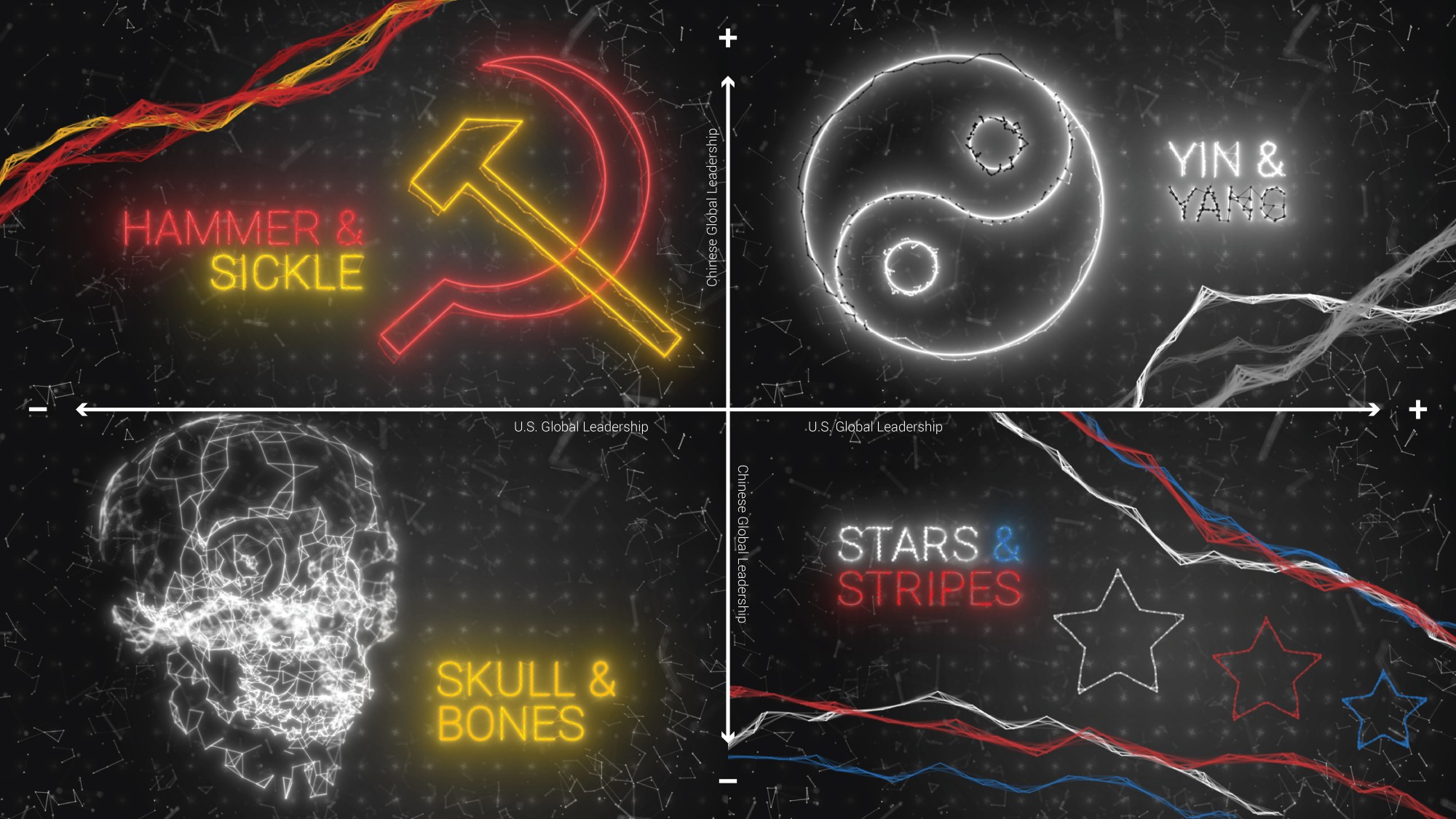 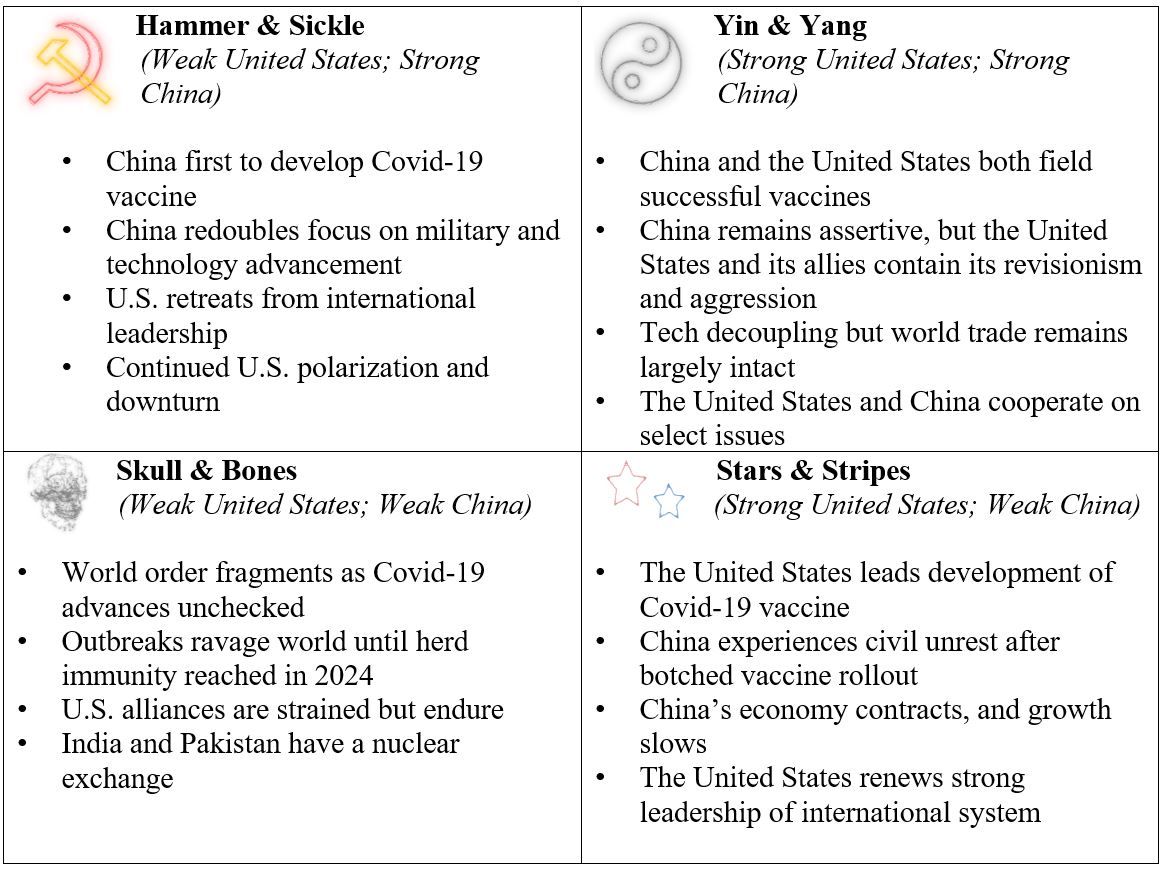 The world order is fragmenting without a clear organizing principle to follow. Within this transforming geopolitical landscape, the most important variables at play are the relative influence and leadership of the United States and China, and the bilateral relationship between these countries. The scenarios suggested that the relative influence of the United States and China and their interaction would play a preponderant role in defining the international landscape in key regions around the world during this timeframe. The relative recovery of both countries from Covid-19, and the degree to which they are weakened or strengthened as a result, was also found to play a significant role in shaping the future geopolitical landscape.

These variables form the X- and Y-axes of the deductive model used to generate the scenario analysis.

Under no scenario was the U.S.-China relationship found to be fully cooperative or positive, though cooperation was possible on select, shared global interests when U.S. power and influence equaled or was greater than China’s. In all scenarios, the U.S.-China relationship remained intertwined, and in all scenarios but the most severe reduction of Chinese global influence, bilateral dynamics were increasingly competitive. Notably, the United States could find sustained advantage in shaping the behavior of China through its allies and partners but only when it was willing to engage multilaterally and when other nations made the cost-benefit calculus that supporting a world under greater U.S. leadership would be preferable to a China-led or non-aligned order. U.S. alliances generally held across scenarios but were more stable and predictable in Europe than Asia and the Middle East, where geopolitics were more in flux and shared interests under increased strain.

This scenario analysis found that the highest likelihood outcome for world order in the decade ahead would not be a unipolar order or a bipolar Cold War-style competition, but a loose multipolarity. Under any outcome, the relative strength of both the United States and China would be diluted or balanced by the influence and independent foreign and security policies of India, Japan, Germany, France, the United Kingdom, and others. There also emerged in the scenarios a growing number of contestations of U.S. power and influence—in particular due to the “spoiler” or other nefarious behavior of Russia, Iran, and North Korea. Despite its relative loss of economic power during this timeframe, Russia remained the most problematic global actor for the United States and its allies, with only limited room for cooperation on issues of strategic stability. Iran was most aggressive across scenarios in which it sensed weakened U.S. commitment to the Middle East. North Korea remained a consistent challenge in the expansion of its weapons programs, though it was more open to negotiation when the United States was stronger and China was weaker. Violent extremist organizations were active across scenarios but more localized and less transnational. They preyed on relative U.S. weakness or its seeming retreat from key regions where they sought to consolidate gains and when they sensed diminished U.S. cooperation with regional partners.

The scenarios notably identified volatility in the China-Russia relationship, suggesting in many ways that ties between countries may have reached a high-water mark that will be difficult to sustain. Russian foreign policy was found to be strongly tied to its own views of its relative strength vis-à-vis both China and the United States, against which it dynamically rebalanced to its own perceived advantage.

Technological and military surprise were “black swans” in 2025-2030. Military application of technology was more likely to be evolutionary than revolutionary, but technological surprise could not be ruled out and in many ways was considered inevitable, if impossible to precisely predict. Key technologies to track, in order of likely strategic importance, included conventional and nuclear hypersonic weapons, autonomous systems, and synthetic biology. Strategic surprise seemed especially problematic and likely to occur in outer space amid intensified gray zone competition and potential warfighting. Related, inadvertent and uncontrolled escalation across domains was a concern in multiple scenarios, paving the way either for a basis for new strategic stability considerations and possible arms control talks or military confrontation. Last, U.S. adversaries increased gray zone activities across scenarios, seeking to reduce the risk of conventional or nuclear conflict while gaining political objectives in areas the United States has struggled to respond. The risk of conventional or nuclear conflict between countries was understood to increase inversely to relative U.S. influence and was especially high in a world order in which the influence of both China and the United States was diminished and global recovery from Covid-19 especially problematic.

Figure 7: Other U.S. Adversaries across Scenarios 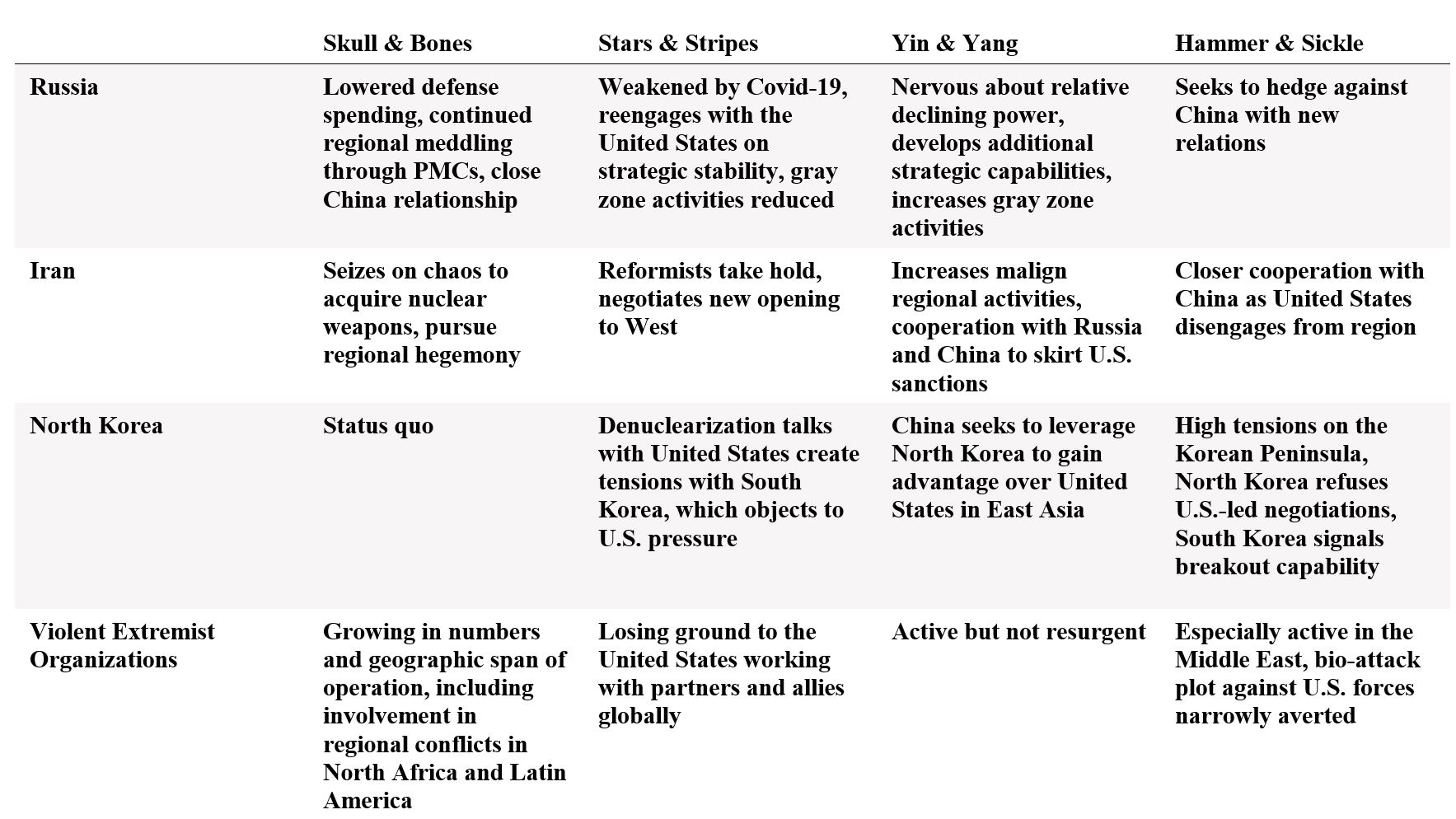 Director of the CSIS Risk and Foresight Group Samuel Brannen then conducted a series of semi-structured interviews with leading defense and security experts as well as internal U.S. Department of Defense experts. All discussions were held under Chatham House Rule to allow for frank exchange and occurred at the unclassified level based on open source information. The interviews sought to identify both consistencies and differences in opinion between experts, including the use of a pre-screening questionnaire. The interviews focused on understanding the underlying logic or basis for divergence of opinion between experts. The threat matrix was consistently revised based upon these expert interviews. Finally, the highest-impact, most uncertain trends were identified to form the central axes for a 2x2 set of deductive scenarios.

Samuel Brannen leads the Risk and Foresight Group and is a senior fellow in the International Security Program at the Center for Strategic and International Studies (CSIS) in Washington, D.C.

COVID-19 , and Defense and Security