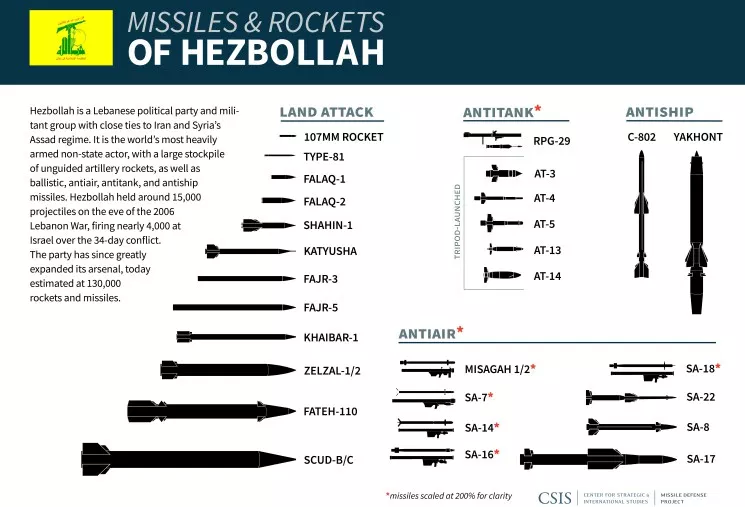 Hezbollah is a Lebanese political party and militant group with close ties to Iran and Syria’s Assad regime. It is the world’s most heavily armed non-state actor—aptly described as “a militia trained like an army and equipped like a state.”1 This is especially true with regard to its missile and rocket forces, which Hezbollah has arrayed against Israel in vast quantities.

The party’s arsenal is comprised primarily of small, man-portable, unguided artillery rockets. Although these devices lack precision, their sheer number make them effective weapons of terror. According to Israeli sources, Hezbollah held around 15,000 rockets and missiles on the eve of the 2006 Lebanon War, firing nearly 4,000 at Israel over the 34-day conflict. Hezbollah has since expanded its rocket force, today estimated at 130,000 rounds.2

Hezbollah asserts that its rocket forces are primarily for deterrence—a means to retaliate against Israel in the event of conflict. In May 2006, Hezbollah’s Secretary General Hassan Nasrallah explained “The purpose of our rockets is to deter Israel from attacking Lebanese civilians…The enemy fears that every time he confronts us, whenever there are victims in our ranks among Lebanese civilians, this will lead to a counter-barrage of our rockets, which he fears.”3 Indiscriminate rocket fire, particularly from small, easily transportable launchers makes the suppression of fire with airpower more challenging. This forces Israel to rely more heavily on ground forces in a conflict. Lacking any air force of its own, Hezbollah prefers ground wars in its own territory to bombardment from the skies. As Human Rights Watch notes, however, none of these arguments justifies targeting civilians under international law.4

The continued growth of Hezbollah’s missile and rocket forces is undesirable for several reasons. It may, for example, embolden the party to overstep Israeli red lines. Hezbollah’s push to acquire longer-ranged and precision-guided munitions could likewise spur Israel into preemptive action.

Hezbollah’s weapons acquisition also raises the prospects for the proliferation of missile technology and know-how. According to Saudi and UAE officials, Hezbollah militants have worked with their Houthi forces in rocket development and launch divisions in Yemen.5 Hezbollah forces in Syria and Iraq similarly operate with various Shiite militias. Growing relations among these groups presents risks for the dissemination of missile technology and knowledge.

The following is a summary compilation of Hezbollah’s missile and rocket arsenal. It is limited by the availability of public source information and does not cover certain topics such as rocket strategies, evolution, or storage locations. This brief instead focuses on the acquisition history, capabilities, and use of these forces.

Middle East , Egypt and the Levant , Defense and Security , Defense Strategy and Capabilities , Geopolitics and International Security , and Missile Defense