Ice Curtain: Why Is There a New Russian Military Facility 300 Miles from Alaska?

“. . . whoever holds the Arctic, holds the world. I think it is the most important strategic place in the world.” These solemn words were uttered in 1935 before a House of Representatives Committee by a retired American general and aviator, Billy Mitchell, who presciently foresaw the Arctic as a vital region for early detection against missile and aviation threats to prevent an attack against the United States. But at the end of the Cold War, the Arctic ceased to be a strategically important place for either the United States or the Russian Federation. But by the 2007-2008 timeframe, Russia began to re-prioritize the Arctic both economically and militarily—in keeping with Vladimir Putin’s vision of restoring Russia’s status as a great power and harnessing the Arctic’s economic potential. Now more than a decade later, Russia has returned to the Arctic militarily with important strategic implications for the United States.

In 2007, the Russian Federation resumed regular air patrols over the Arctic Ocean and penetrated the North American Aerospace Defense Command (NORAD) 12- mile air defense identification zone around Alaska 18 times.1 Since 2007, Russia has adopted a series of policies and strategies and amended its military and maritime doctrines to include the Arctic region, emphasizing the need to protect Russia’s Arctic territory and to project influence and power beyond its Arctic coastlines.2,3 In 2012, Russia announced the creation of an Arctic brigade and announced it would establish a missile defense system and deploy fighter aircraft to Novaya Zemlya,4 its northwestern archipelago, which separates the Barents and Kara Seas in 2013. By 2014, Russia announced an ambitious military force posture in the Arctic, which consisted of a new strategic command for the Arctic zone (the Northern Fleet Joint Strategic Command), the reopening of 50 former Soviet Arctic military bases, an increase in Russian special forces in the region by 30 percent by 2015, and a significant infrastructure program, which included 13 air defense radar stations, an aviation training ground, and 10 technical radar and air guidance stations in the Arctic region.5

As Russia enhanced its military posture and forces in the Arctic, it concentrated on exercising its new capabilities in the context of territorial defense and power projection. In 2015, the Russian military launched an unannounced large-scale military exercise that involved more than 45,000 Russian forces, 15 submarines, and 41 warships and practiced full combat readiness in the Arctic.6 Russia’s Northern Fleet, home to Russia’s sea-based nuclear deterrent, conducted 4,700 exercises in 2017. The Zapad-2017 exercise featured missile strikes from its new base on Kotelny Island in the East Siberian Sea, where new facilities were completed along with now modernized bases in Novaya Zemlya and Franz-Josef Land, in the Barents Sea.7 In 2018, the Northern Fleet held around 3,800 test combat training exercises, with many designed to enhance both power-projection capabilities as well as protect strategic posts including the New Siberian Islands that are near potential oil and gas reserves and straddle the Northern Sea Route (NSR).9,10 Russian anti-submarine aircraft as well as attack and reconnaissance aircraft conducted over 100 Arctic Ocean patrols in 2018.11 The Russian military also announced a new series of Arctic exercises. Tsentr-2019 (August-September), which tested new Russian weapons and air defense systems.12 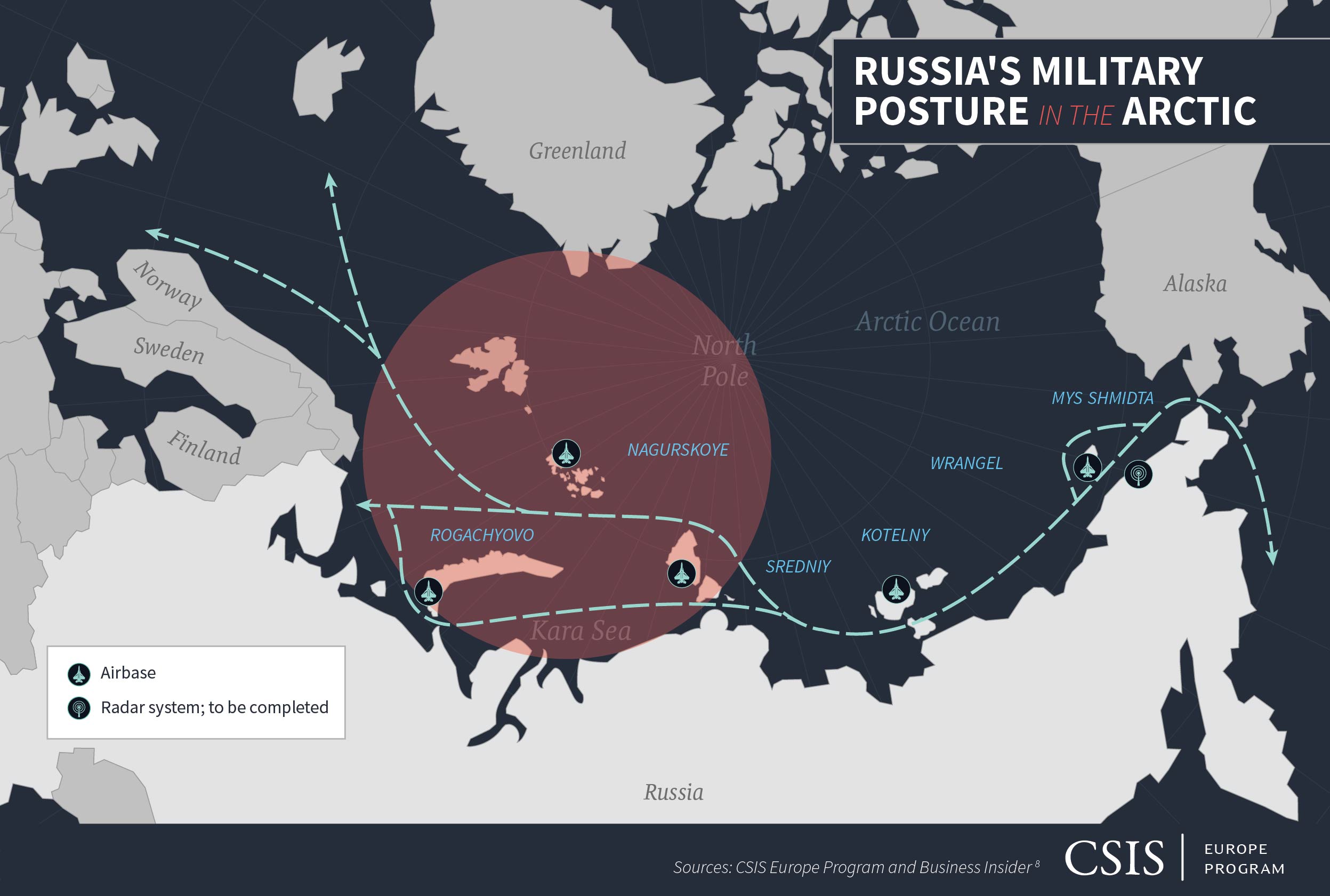 A FOCUS ON REMOTE ARCTIC ISLANDS AND AIR DEFENSE SYSTEMS: WRANGEL ISLAND AS AN EXAMPLE 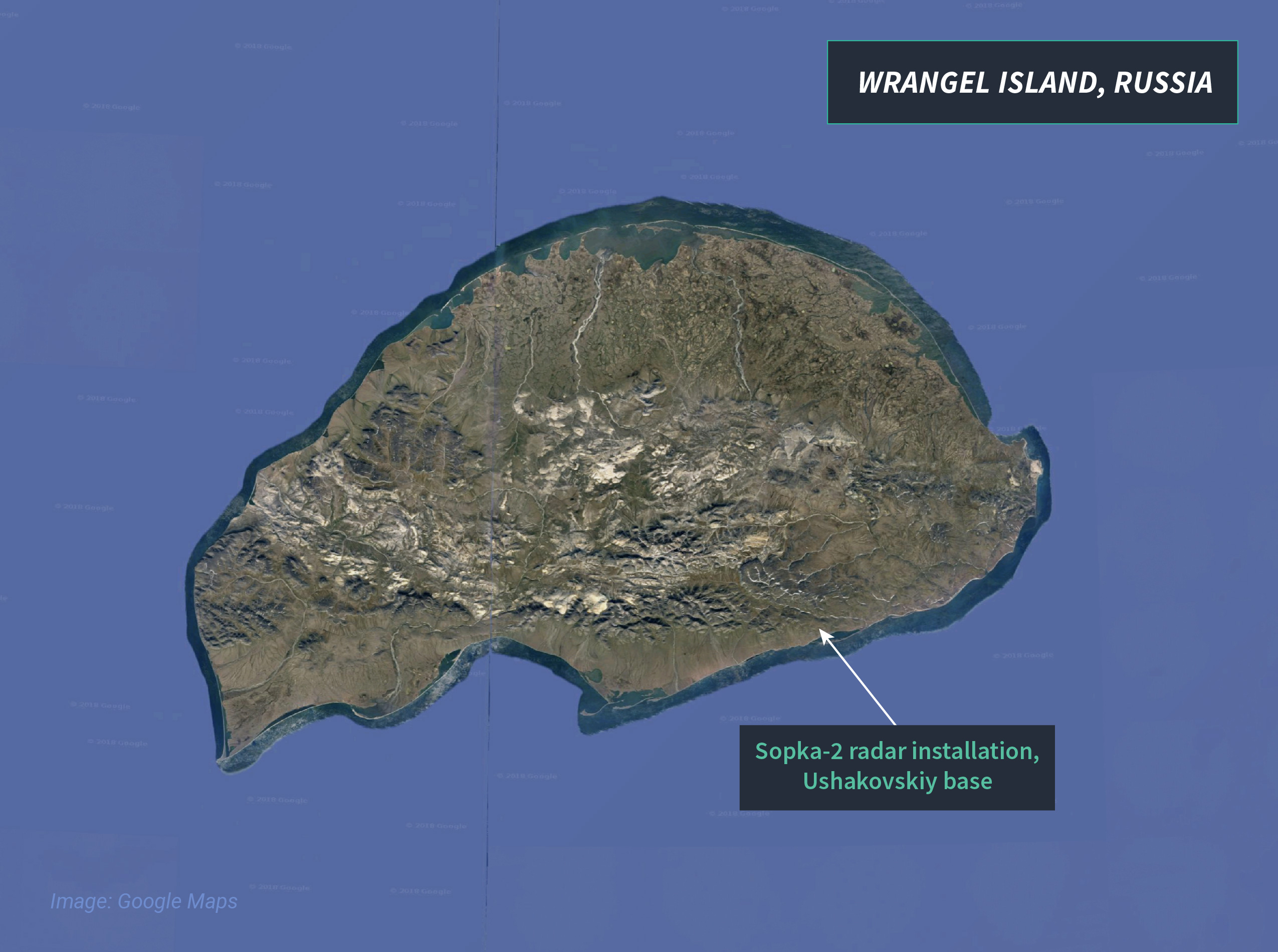 Russia has significantly strengthened its military presence in its northernmost archipelagos by upgrading its bases on Wrangel Island, Kotelny Island, Franz Josef Land, on the shore of the Kara Sea, Alykel, Tiksi, Chokurdakh, Chersky, Kigelyakh, and Taymylyr. Many of these installations have airfields or will be equipped with 2,500-meter runways that can receive Russian fighter aircraft. Similarly, each of these installations has or is scheduled to recieve a radar detachment capable of improving domain awareness in Arctic airspace, and many are equipped with modern and sophisticated weaponry including the Rubezh coastal missile systems and the Pantsir-S1 anti-aircraft weapon systems.13,14 It has been reported that Russia has deployed S-400 surface-to-air missile systems to the Novaya Zemlya archipelago and to the Yakutian port of Tiksi.15 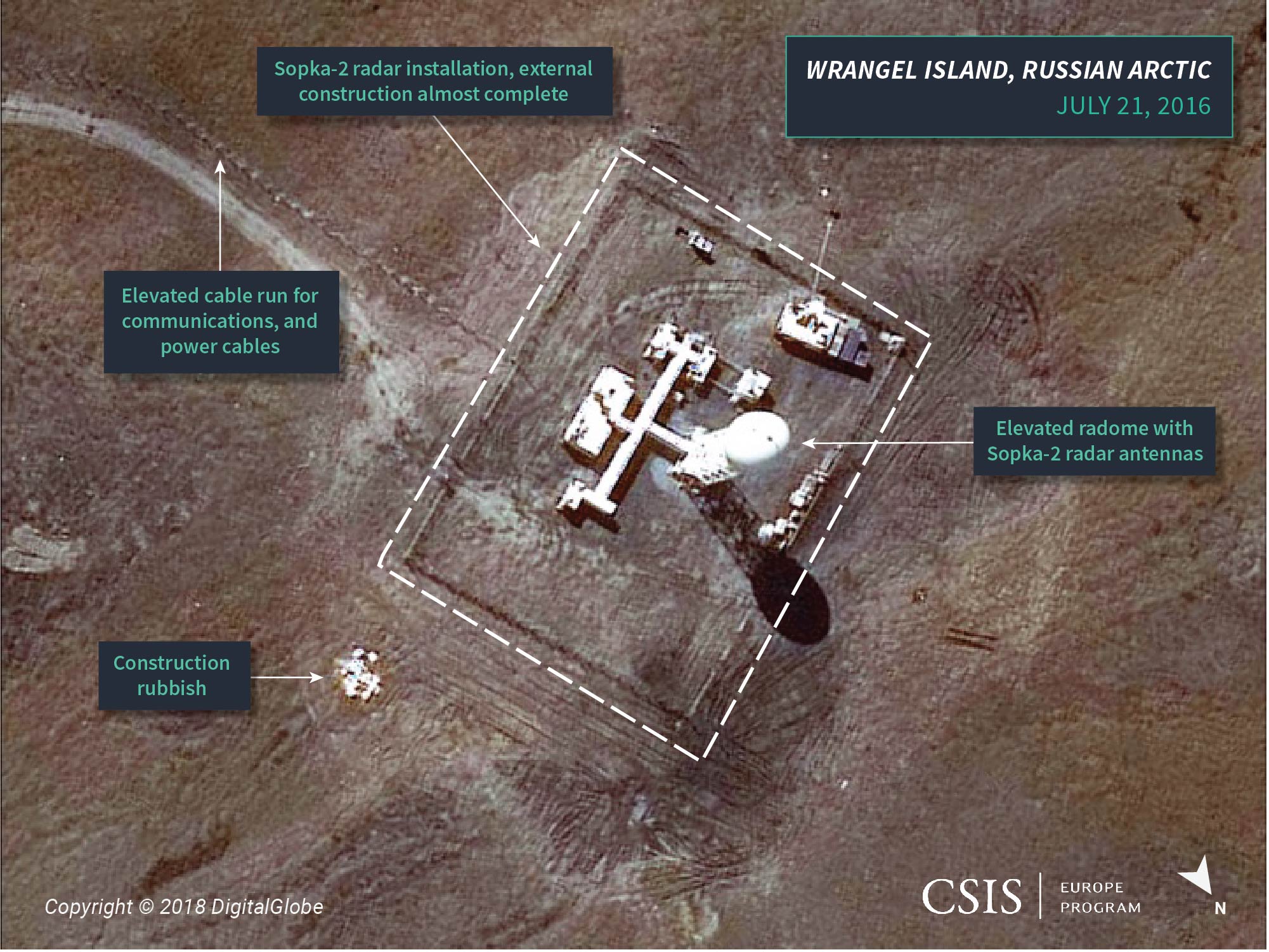 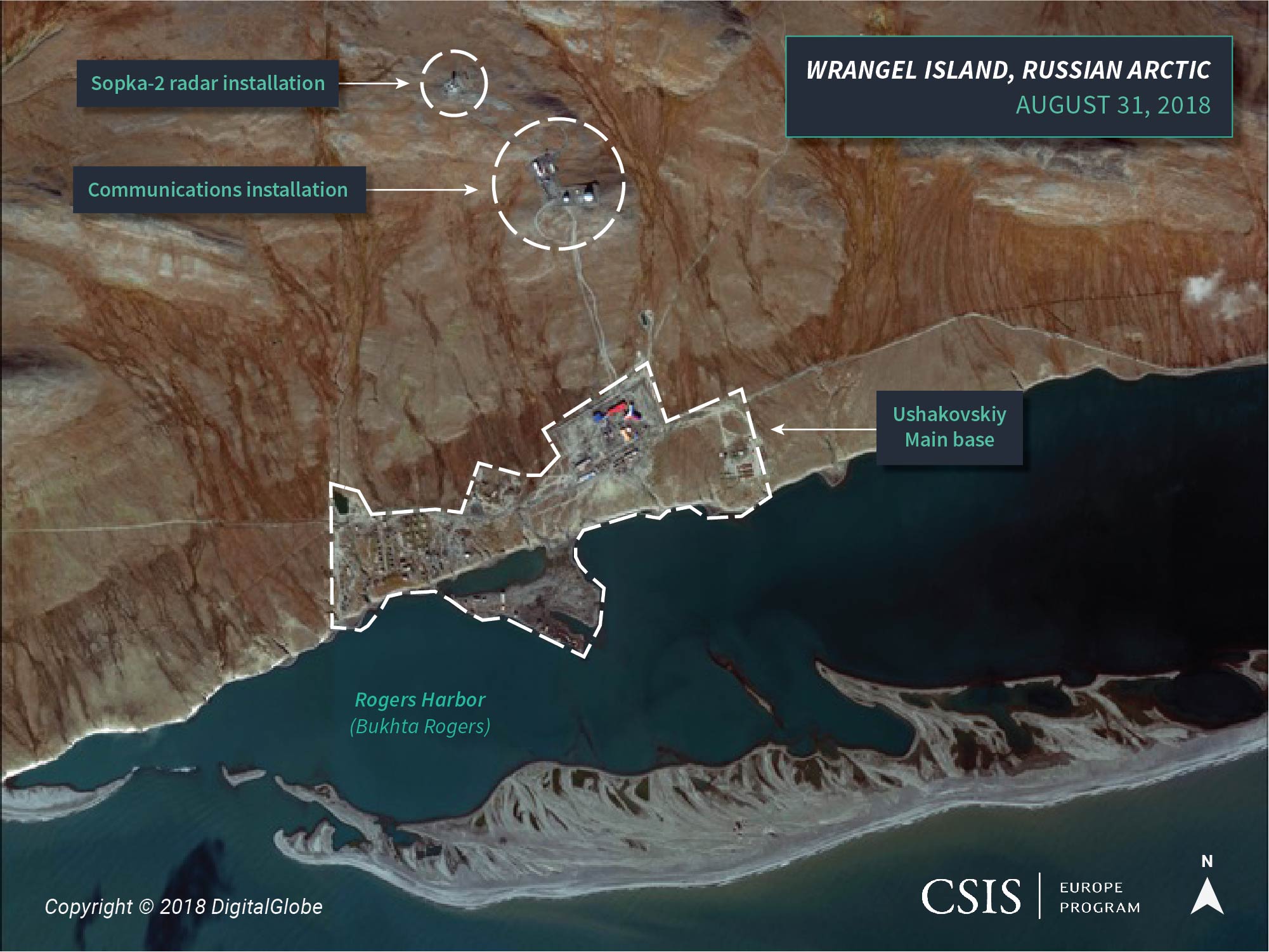 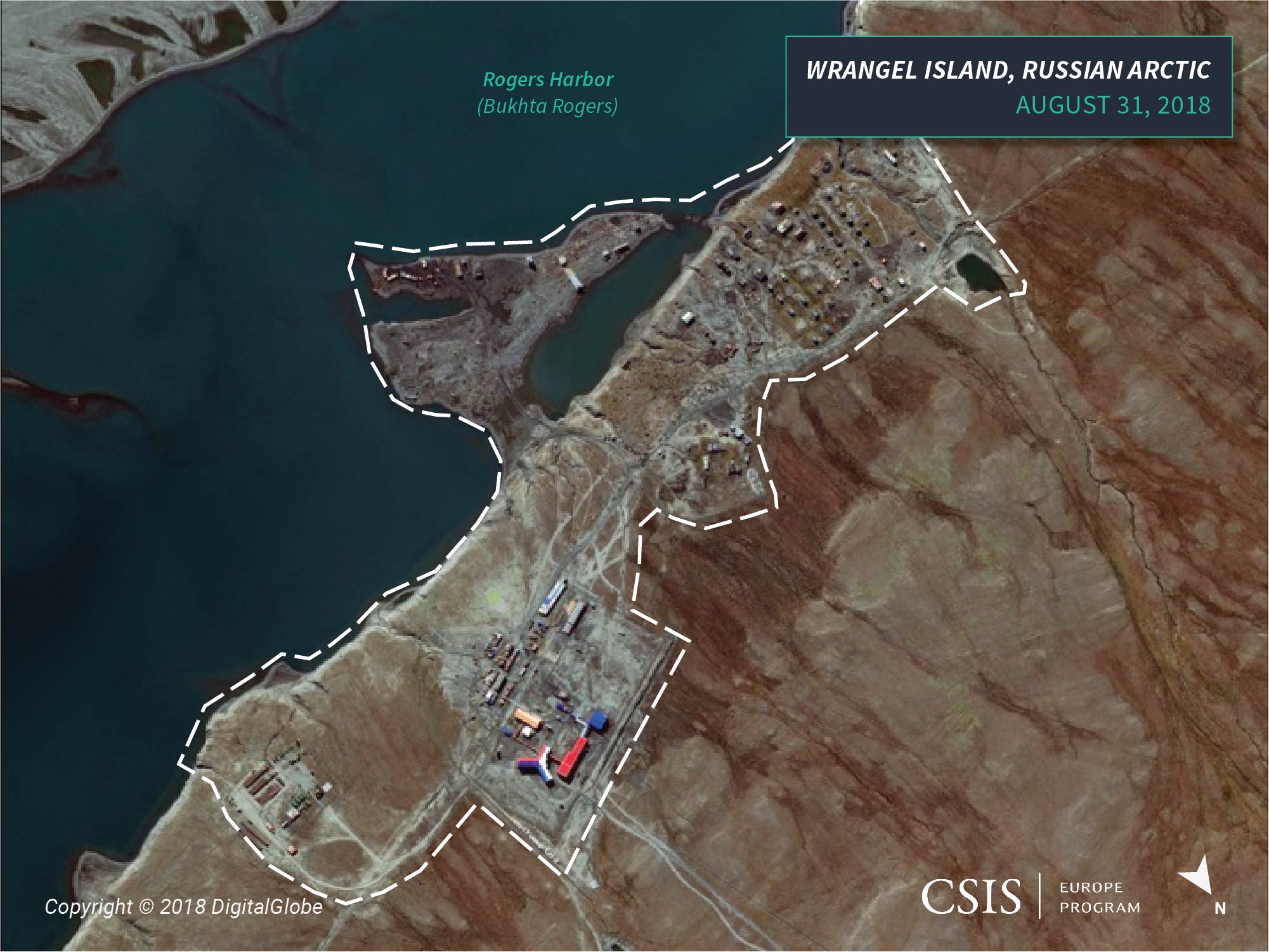 Why has Russia stationed air defense assets on remote Arctic islands? Northern Fleet Commander Admiral Nikolay Yevmenov described these assets in August 2018 as a “protective dome” of anti-aircraft missile units strung along the Arctic to defend the airspace above the Russian Arctic.16 Is this the case?

Wrangel Island—an island nearly 300 miles from the Alaskan coast—is a clear example of Russia’s growing Arctic military footprint and its strategic ambition, which may have implications for U.S. national security. In late August 2014, the Russian navy conducted a preliminary assessment of Wrangel Island in preparation for the establishment of a new naval base which would be “the first-ever naval base on (Wrangel Island).”17 Satellite imagery shows that actual construction of the new naval base likely began sometime between July 2015 and April 2016 and included the replacement of an abandoned and derelict Cold War era installation at Ushakovskiy.18 The new base includes a signature trefoil structure (three interconnected buildings designed to withstand extreme cold temperatures) as well as a number of support installations, such as the construction of a Sopka-2 radar installation.19 According to Russian officials, the installation will control civilian air traffic, provide meteorological data and monitor airspace for potentially hostile targets.

But the Sopka-2 on Wrangel Island is a 3D dual-use S-band air-route radar with a range of 350km. It faces east in an arc stretching from the Beaufort Sea in the north to the Bering Strait in the south, but its 350km maximum range means that its coverage does not extend into either. Additionally, the location of the Sopka-2 is below the peaks of the island’s Gora Sovetskaya mountain to the west and northwest, which results in some terrain masking to avoid potential low- and medium-altitude threats from that direction. The significance of this limitation is unclear as the area to the west may be covered by other radar systems.20 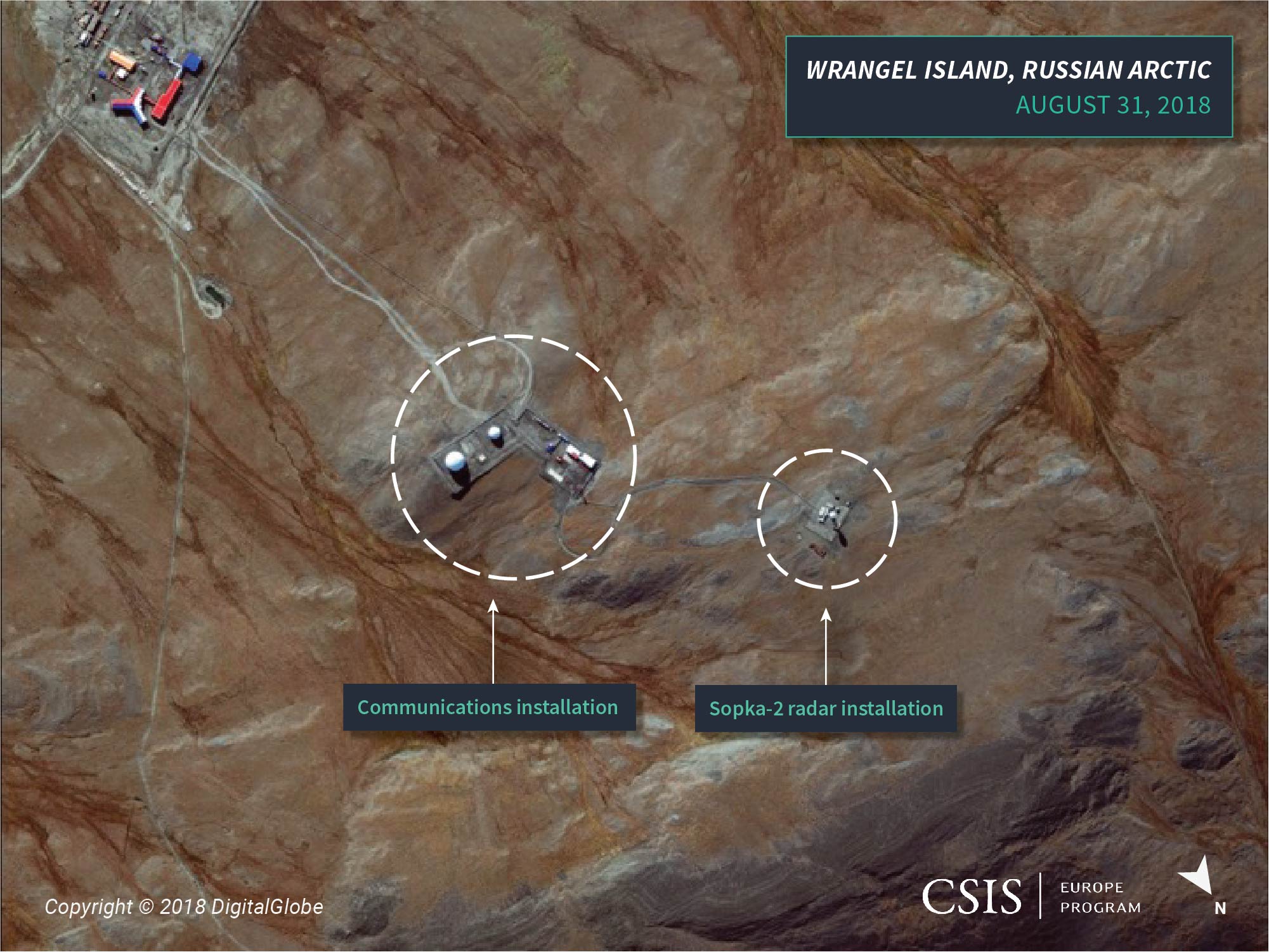 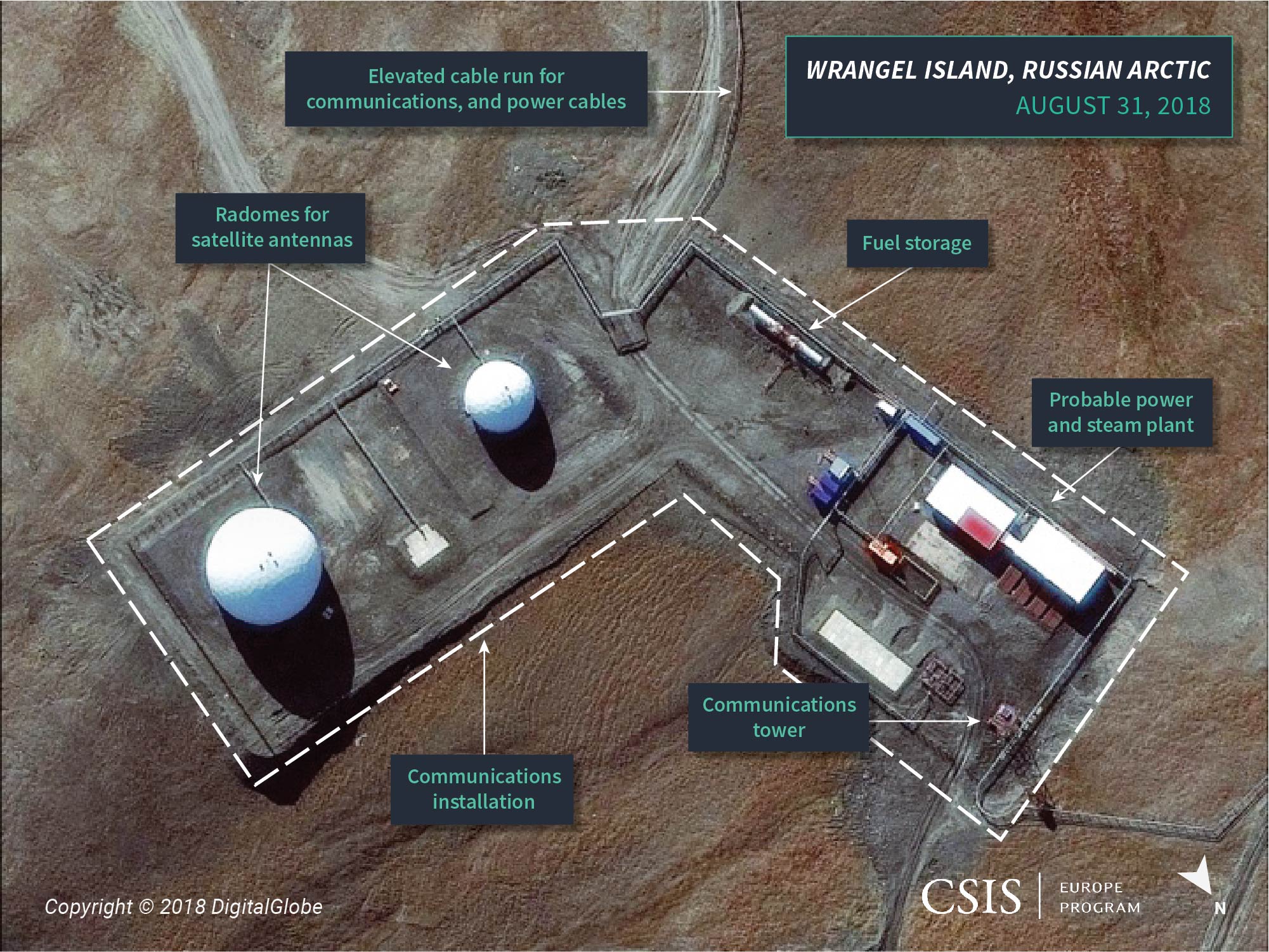 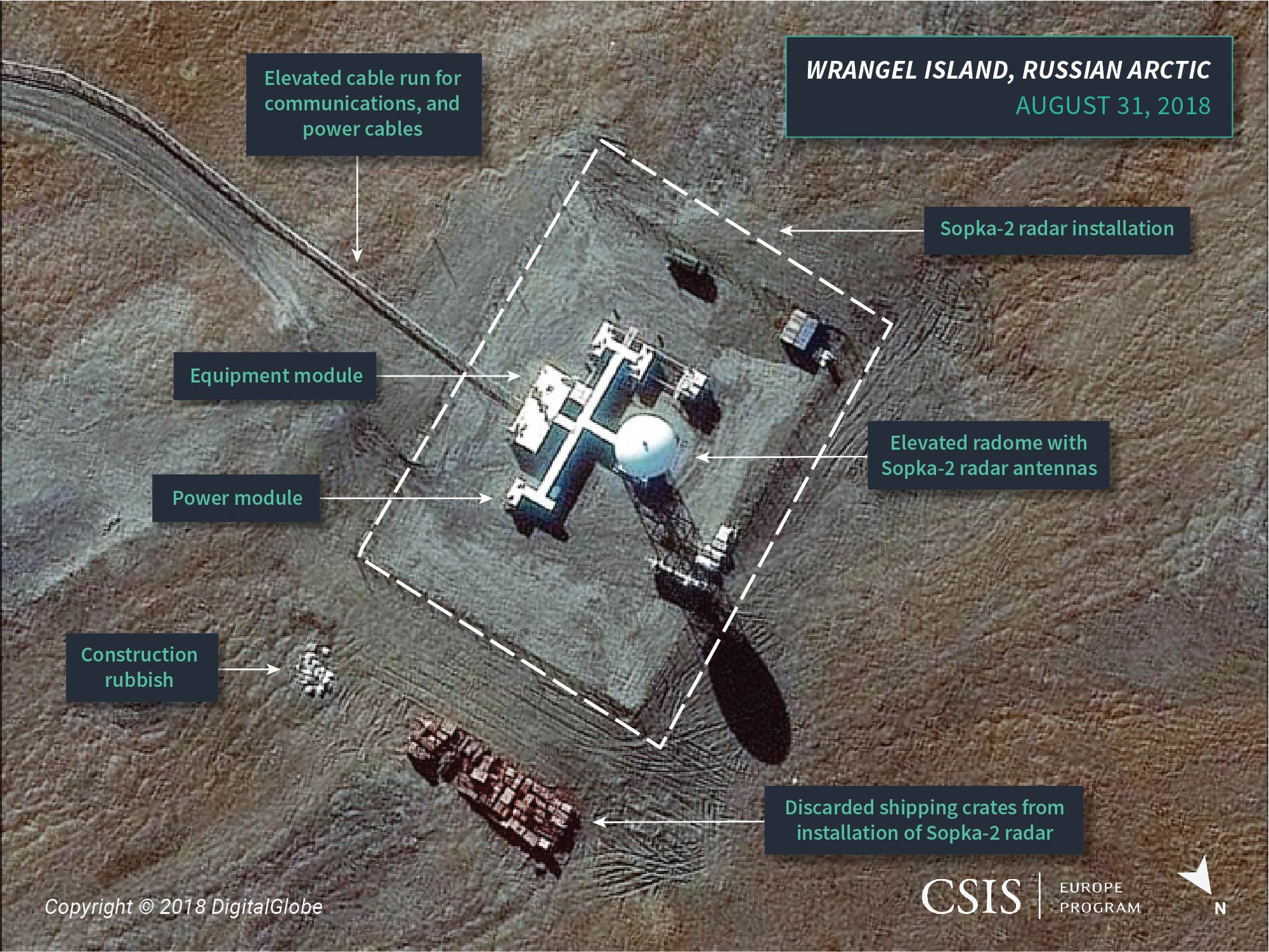 Subsequent imagery from July 21, 2016, shows that the Sopka-2 installation and its elevated radome housing the system’s three antennas was externally completed and enclosed by a tall wire fence.22 An elevated cable run— likely carrying data, communications, and backup power cables—was also in place connecting the installation to the communications facility and main base. Although tentative, the radar may not have been operational at this time. A subsequent image from August 31, 2017, shows a neatly organized pile of discarded shipping crates, which possibly contained the internal equipment required to complete the internal installation of the system. Initial tests of the Sopka-2 facility occurred in January during a simulation exercise.23

As one of its most easterly situated radar systems in the Russian Arctic, the Wrangel Island Sopka-2 radar is likely designed to supplement Russia’s strategic early warning radar network and to detect U.S. aircraft. When viewed in isolation, an early warning radar system on Wrangel Island has limited strategic value and could easily be discounted. However, when viewed as part of a larger network of state- of-the-art radars covering the entirety of Russia’s northern borders, including the Arctic Ocean and Russia’s coastline, it may have greater importance. The Sopka-2 is a cueing radar, which means it collects data that could be used to direct more powerful radars located closer to the Russian mainland. The network would fill gaps over the Arctic and when combined with new over-the-horizon radars, would establish a detection field ranging from 900 to 1,200 miles beyond the country’s borders.24 Russia’s military footprint on Wrangel Island could gather intelligence on, detect, and possibly impact future U.S. military activity in the region.

The Sopka-2 radar’s 350 km range and its intelligence gathering capabilities allows Russia to potentially gather intelligence and detect activity originating from U.S. military installations such as Eielson Air Force Base (AFB) and Joint Base Elmendorf-Richardson as well as Fort Greely army base, a key missile defense site and home to U.S. Ground-based Midcourse Defense interceptors. The pace of U.S. investments at Fort Greely has accelerated since 2013, primarily in response to a series of missile tests by North Korea and includes $200 million from Congress to add a fourth missile field with 20 additional interceptors over the next four years.25 The 2019 U.S. missile defense strategy also increases the number of ground-based interceptors at Fort Greely from 44 to 64 over the next several years.26 Eielson AFB is projected to receive 54 F-35s between 2020 and 2022, increasing the capacity of the base in light of its strategic importance to defending the United States in the Indo-Pacific region. Elmendorf AFB is also the headquarters of Alaskan Command (ALCOM) and one of three NORAD regions that defend North American airspace which Russian bombers test from time to time.

As former Air Force Secretary Heather Wilson noted, superiority in the Arctic will depend heavily on airpower, which places renewed emphasis on early warning detection systems and aircraft. At present, it appears that the Wrangel Island radar system tracks regional and local air defense—including the provision of threat information from incoming aircraft—to local and regional surface-to-air missile units and air defense interceptors.27 But as Russia’s aerial advancements in the Arctic advance, Russia may achieve integrated air and missile defense superiority.

To read more, visit NGA’s Tearline article or download the Tearline app from the Apple Store or Google Play. This content also syndicates to the Office of the Director of National Intelligence’s website intelligence.gov, which is a transparency effort to better explain certain strategic, economic, and humanitarian IC missions to the public.