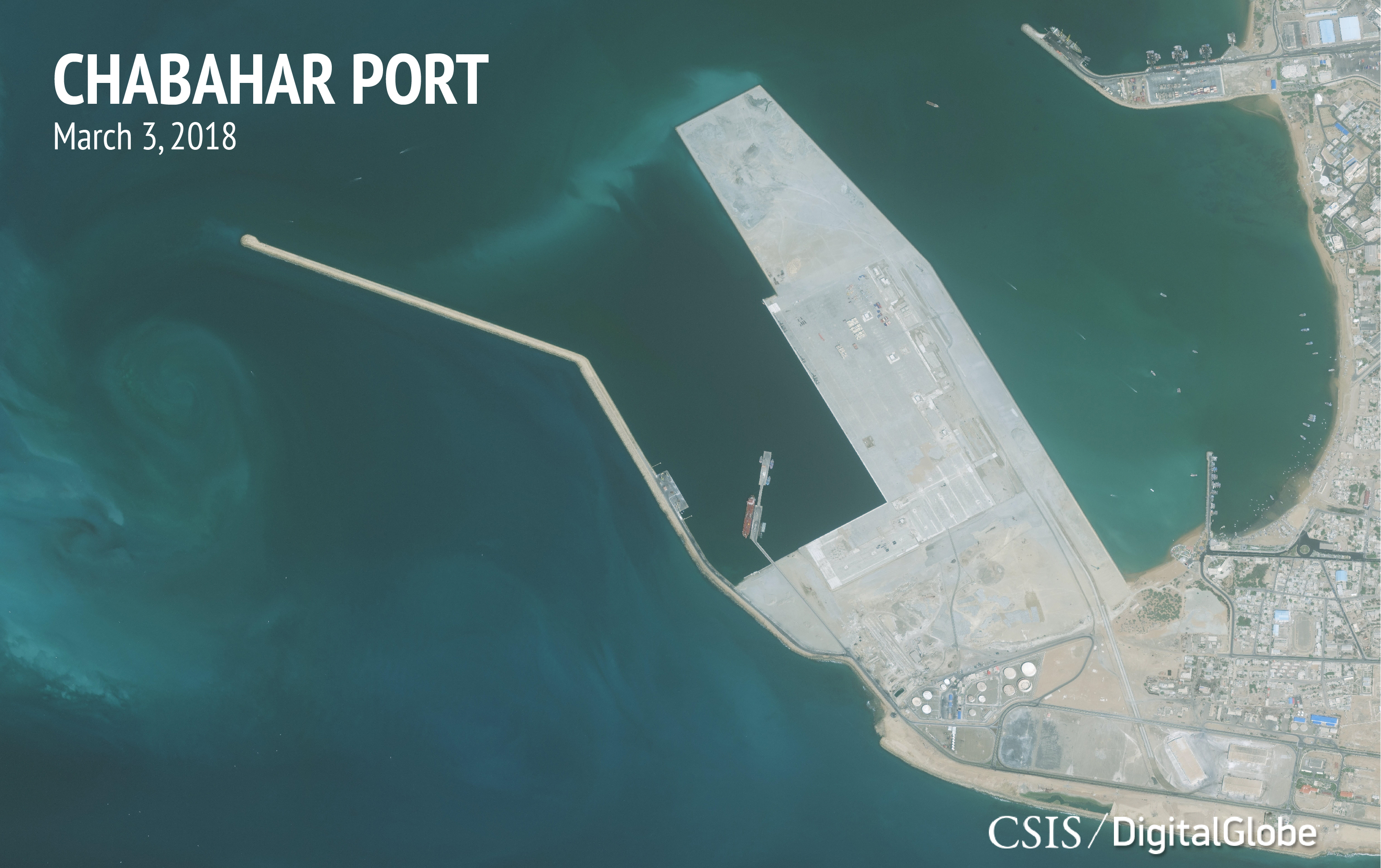 On October 29, 2017, India flagged off the first shipment of wheat bound for Afghanistan via Iran’s Chabahar Port, in which India is a key developer. Indian Prime Minister Narendra Modi on the occasion tweeted , “I congratulate Afghanistan and Iran on Indian wheat shipment being flagged off from Kandla to Afghanistan through Chabahar.” Chabahar is important to India, both as a stepping stone to become a larger regional infrastructure developer, but also to help drive trade and aid to Afghanistan. Despite these important drivers in Delhi, the project has not proceeded smoothly, and there could be further bumps ahead as India tries to balance cooperation with Iran, its relations with the United States and Israel, and fend off regional challenges from China and Pakistan.

The first phase of the strategic Chabahar port was inaugurated in December 2017 by Iranian President Hassan Rouhani in the presence of officials from 17 countries. To underscore the importance of this project for India, Indian minister of state for shipping Pon Radhakrishnan was present at the inauguration ceremony of the Phase 1 of the Shahid Beheshti Port at Chabahar. During Iranian President Hasan Rouhani’s visit to India in February 2018, New Delhi signed the leasing agreement with Iran giving India Ports Global Private Limited (IPGPL) operational rights of Chabahar’s Shahid-Besheshti port terminal for 18 months.

Ever since Iran hired Indian firms to develop a seaport in the Chabahar city in the 1990s, India has been central to the Chabahar project. Having sensed the need to improve transregional connectivity, India signed a trilateral transit agreement with Afghanistan and Iran in May 2016 that enables a passage for Indian exports to reach Afghanistan through Iran. This was followed by Prime Minister Modi’s visit to Iran in May 2016, when India signed an agreement to develop two terminals of the Chabahar port. India views Chabahar as a means to gain access to Central Asia and the region beyond to overcome its limitation of not having a contiguous border with Afghanistan, hampering the prospects of bilateral trade between India and Central Asia. 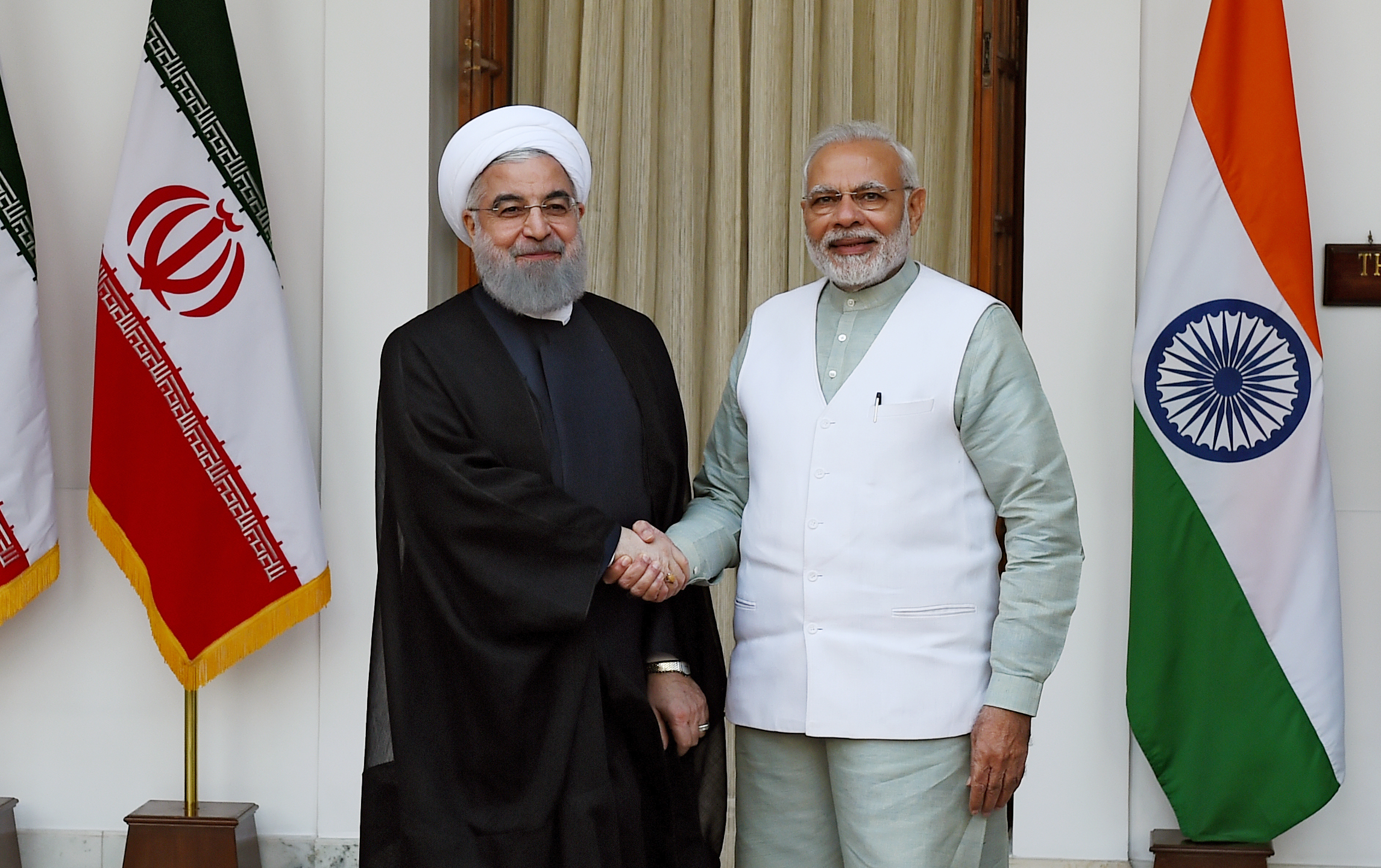 The State of Play

India is to build and operate two berths in Chabahar Port Phase-I with a total capital investment of $85 million and annual revenue expenditure of $23 million on a 10-year lease. Chabahar will become a key transit and transport corridor connecting India, Iran, and Afghanistan, and feed into a larger multimodal transportation network for goods and passengers across the three nations. The port is expected to be operational by the end of 2018 with New Delhi committed to developing a free-trade area around the port, and finally complete the loop with a $1.6 billion railway line to Zahedan, an Iranian city near the border of southwest Afghanistan.

Chabahar currently has two port complexes, the Shahid Kalantari and Shahid Beheshti. The former is a traffic port, while the latter being planned as the future regional hub port. With the extension of the Shahid Beheshti port complex in 2017, Chabahar port’s present capacity of 2.5 million tons (MT) per annum has been expanded to 8 MT per annum and is expected to reach 20 million MT per annum during the final phase of the project. Iran has offered India several incentives around Chabahar such as the establishment of an elaborate free trade and industrial zone (FTZ). The FTZ is divided into nine functional zones, with 26 percent of the territory being allocated for the trade and service sector, 49 percent for industries, and 25 percent for tourism and residential activities. Other measures undertaken by the Iranian government, which encourage foreign capital inflow, include protecting the incoming investments under the Foreign Investment Promotion and Protection Act (FIPPA) and conforming to key World Trade Organization (WTO) rules and regulations.

Chabahar port sits only 72 kilometers from Pakistan's Gwadar Port, which is being developed with Chinese investment. This proximity is viewed as another sign of strategic competition between India and China in the region. The Chabahar port project is important to India’s larger geostrategic ambition that aims to limit China-Pakistan cooperation while expanding New Delhi’s influence beyond South Asia. Chabahar is 950 kilometers away from the Milak border crossing on the Afghan border and 768 nautical miles from India’s Mumbai port. Chabahar is vital for both India and Iran to realize their ambition of reducing dependency on the Suez Canal for transporting cargo to Europe. Chabahar’s strategic position is a boon for the envisioned International North South Transport Corridor (INSTC), signed between India, Iran, and Russia in 2000, that would establish transport connectivity between Europe, Central Asia, and India. Chabahar is also situated in the path of the South Asia corridor, which passes through India and Mirjaveh in Iran, linking Southeast Asia with Europe. 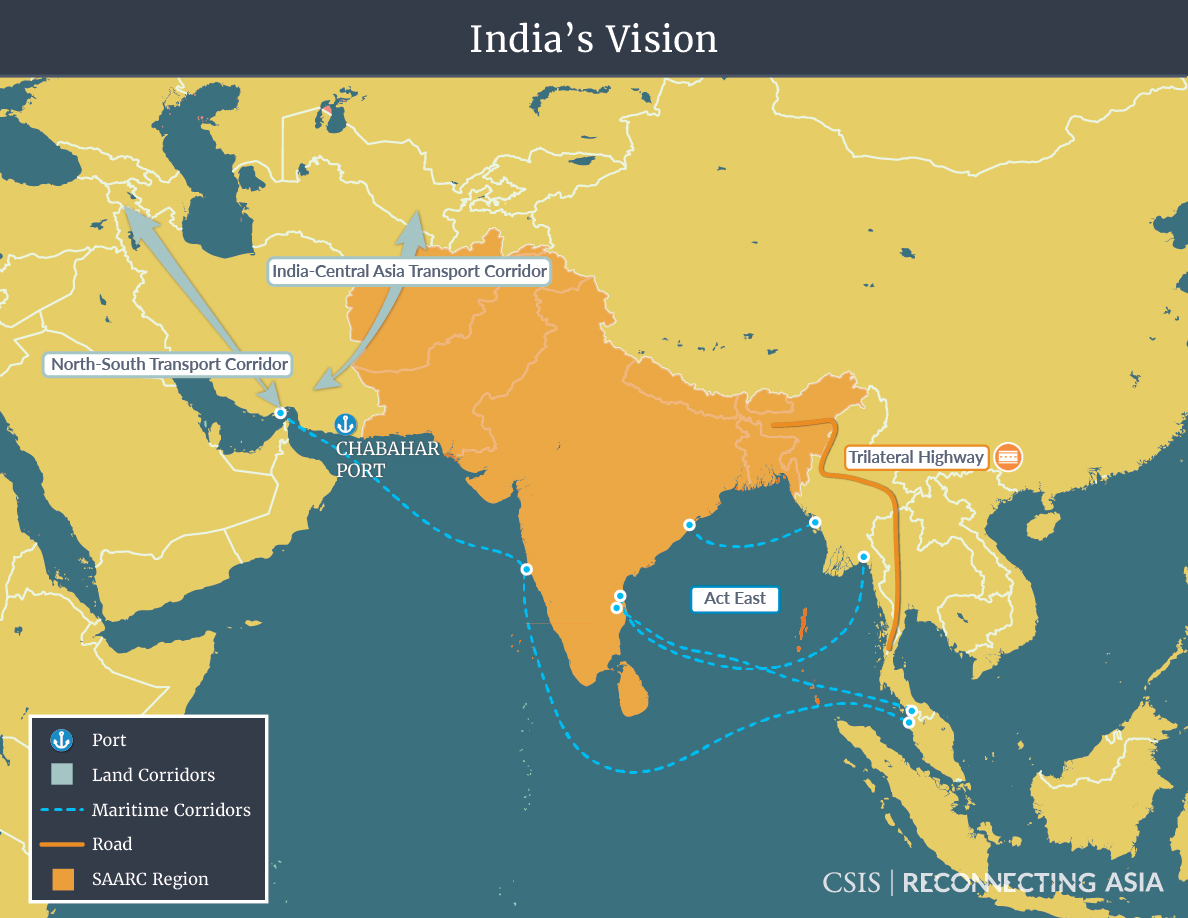 There is also a larger dynamic at play here in terms of regional connectivity. India, Iran, and Afghanistan are working toward integrated development of connectivity infrastructure including ports and road and rail networks to open up greater opportunities for regional market access and integration of their economies. India has already completed the Zaranj-Delaram highway in Afghanistan, which would facilitate the trade to Kabul, and eventually beyond, to Central Asia. At a time when China is attempting to redraw regional boundaries through its Belt and Road Initiative, India and other regional players are looking at enhancing their own regional connectivity profiles.

Clearly, alleviating the Pakistani bottleneck in terms of India-Afghanistan connectivity is central to the project as a means to expand trade between the two nations, as well as facilitate delivery of Indian aid. As Afghan Chief Executive Abdullah Abdullah made clear, “Afghanistan used to rely only on one transit road, which was through Karachi. That is not the case anymore. [Now] it’s [also] through Chabahar.” For Kabul, overcoming its dependence on Islamabad is a key foreign policy priority and for New Delhi, and enhancing connectivity with Kabul is key to sustaining its multidimensional engagement in long-term capacity building in the war-torn nation.

The development of Chabahar continues to be a challenging affair. India does not occupy a privileged place in Iran’s foreign policy. Other factors such as the impact of U.S. economic sanctions and instability in Afghanistan remain key concerns that could impact the development pace and full operationalization of the project.

Iran has repeatedly shrugged off Indian requests to gain a greater foothold in its energy sector, as evident in the case of Farzad-B gas field. Notwithstanding the fact that India is currently the second-largest buyer of Iranian oil, Iran awarded the lucrative deal to Russia for developing the gas field that was discovered by an Indian consortium. Moreover, against what has been termed as a “strategic partnership” by some, India-Iran ties remain underdeveloped when compared to the former’s expansive relationship with Israel and the Gulf Cooperation Council (GCC) member states. 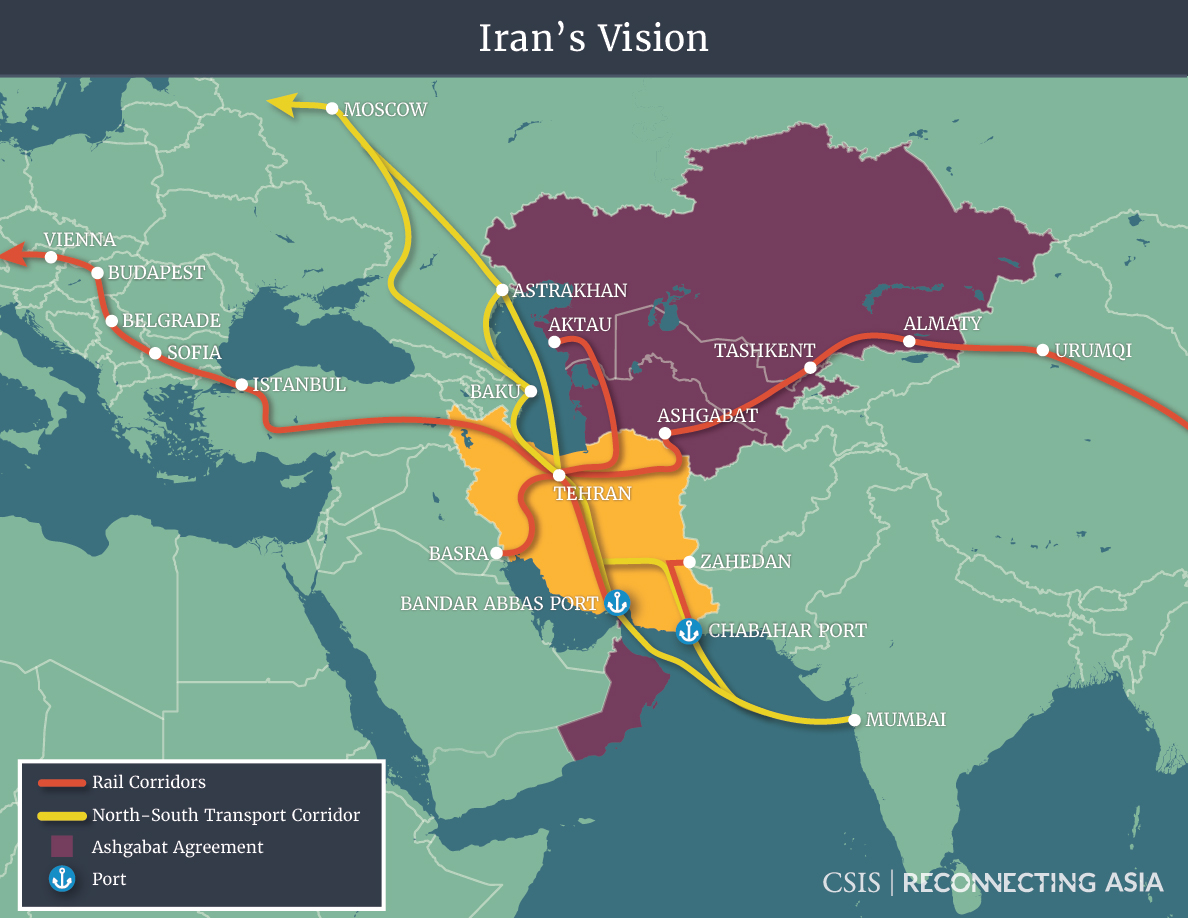 Though Iran's ties with Pakistan have been historically mired in suspicion, Tehran has assured Islamabad that it would not allow Delhi or any other country to use Chabahar against Pakistan. Iran doesn’t want Pakistan to overtly shift to the Saudi Arabia-led regional bloc evolving in the Middle East and it has even dangled the possibility of Pakistan joining the project at some future date. In May 2016, the same year in which India signed the historic trilateral accord with Iran and Afghanistan to cooperate on the Chabahar port project, Iran’s ambassador to Pakistan, Mehdi Honerdoost, categorically stated that the Chabahar deal is not finished, nor is it limited to just three partner countries. Mehdi commented, “The deal is not finished. We are waiting for new members. Pakistan, our brotherly neighbours and China, a great partner of the Iranians and a good friend of Pakistan, are both welcome.” In fact, the Chinese firm Shanghai Zhenhua Heavy Industries Co. Ltd. (ZPMC) won the auction for supplying cranes to India Ports Global Private Limited (IPGPL), which is developing the Chabahar project.

Iran may find it difficult to leave China out of the Chabahar project. China is the largest foreign investor in Iran, filling the vacuum left by Western nations in recent decades. Moreover, China has successfully completed a number of infrastructure projects in Iran including the Tehran metro, and is providing $1.5 billion for the electrification of the Tehran-Mashhad railway line through its EXIM bank. Both China and Iran announced in 2016 their intent to expand bilateral trade to $600 billion. This is complemented by the fact that China has more experience than India in successfully undertaking overseas infrastructure projects. Bureaucratic snarls accompanied by the delay in transferring the $150 million soft loan and the promised $500 million investment in the FTZ around Chabahar adds skepticism to India’s commitment in realizing the project.

The attitude of the Trump administration toward Iran also exacerbates India’s fears of deepening its economic engagement with Iran. Despite former U.S. Secretary of State Rex Tillerson suggesting that Washington does not wish to intervene in the legitimate business activities between Iran and India, the Trump administration has taken an aggressive posture toward Iran. The threat of renewed sanctions against Iran, and firms that contribute to the Iranian economy, looms overhead. The volatile security situation in Afghanistan can also derail the trilateral endeavor of India, Iran, and Afghanistan to operationalize the Chabahar port facility.

Despite these challenges, India and Iran have repeatedly underscored their desire to complete the Chabahar project and there seems to be a recognition in both New Delhi and Tehran that this project is key to their strategic priorities.

Harsh V. Pant is an adjunct fellow (non-resident) with the Wadhwani Chair in U.S.-India Policy Studies at CSIS.