A trade war is being stoked between the two largest economies of the world. The consequences will affect those who have had no say, including small countries like Ghana . . . These events provide proof, if some were needed, that ours is an inter- dependent world.
- President of Ghana Nana Akufo-Addo1

Speaking at the United Nations General Assembly, President Nana Akufo-Addo of Ghana warned of the repercussions of escalating U.S.-China trade tensions on African nations. Although largely absent from the discourse surrounding the so-called “trade war,” sub-Saharan Africa has suffered from its impacts. Uncertainty hovering over global and African markets has already undermined investor confidence, triggering drops in commodity prices and local currencies. A slowdown in Chinese production and global growth could threaten to throw African markets further off balance.

In 2018, the Trump administration’s trade measures sent ripples through the global economy. Washington tacked tariffs on 14.9 percent of U.S. imports, arguing that competitive imports from China, the European Union, Canada, and other major exporters were a threat to U.S. jobs and industry and, by extension, to U.S. national security.2 Placing China at the center of a protectionist campaign, the United States used the tariffs to punish China for engaging in “unreasonable and discriminatory” business conduct.3 By January 2019, President Trump had levied tariffs on over $250 billion worth of Chinese goods and threatened to extend them to all Chinese imports. For its part, China retaliated with tariffs on more than $110 billion of U.S. products.4

Although not the target of most U.S. tariffs, sub-Saharan Africa is poised to suffer from their impacts. The International Monetary Fund (IMF) lowered African growth projections from 3.3 percent to 3.1 percent for 2019, citing rising trade tensions, as well as Brexit and slowing Chinese growth. It further warned that the trade war could alone cause up to a 1.5 percent cumulative drop in Africa’s GDP growth by 2021.5 The predicted impacts of tariffs on African economies have already shaken investor confidence, precipitating drops in commodity prices, local currencies, and major stock exchanges.6 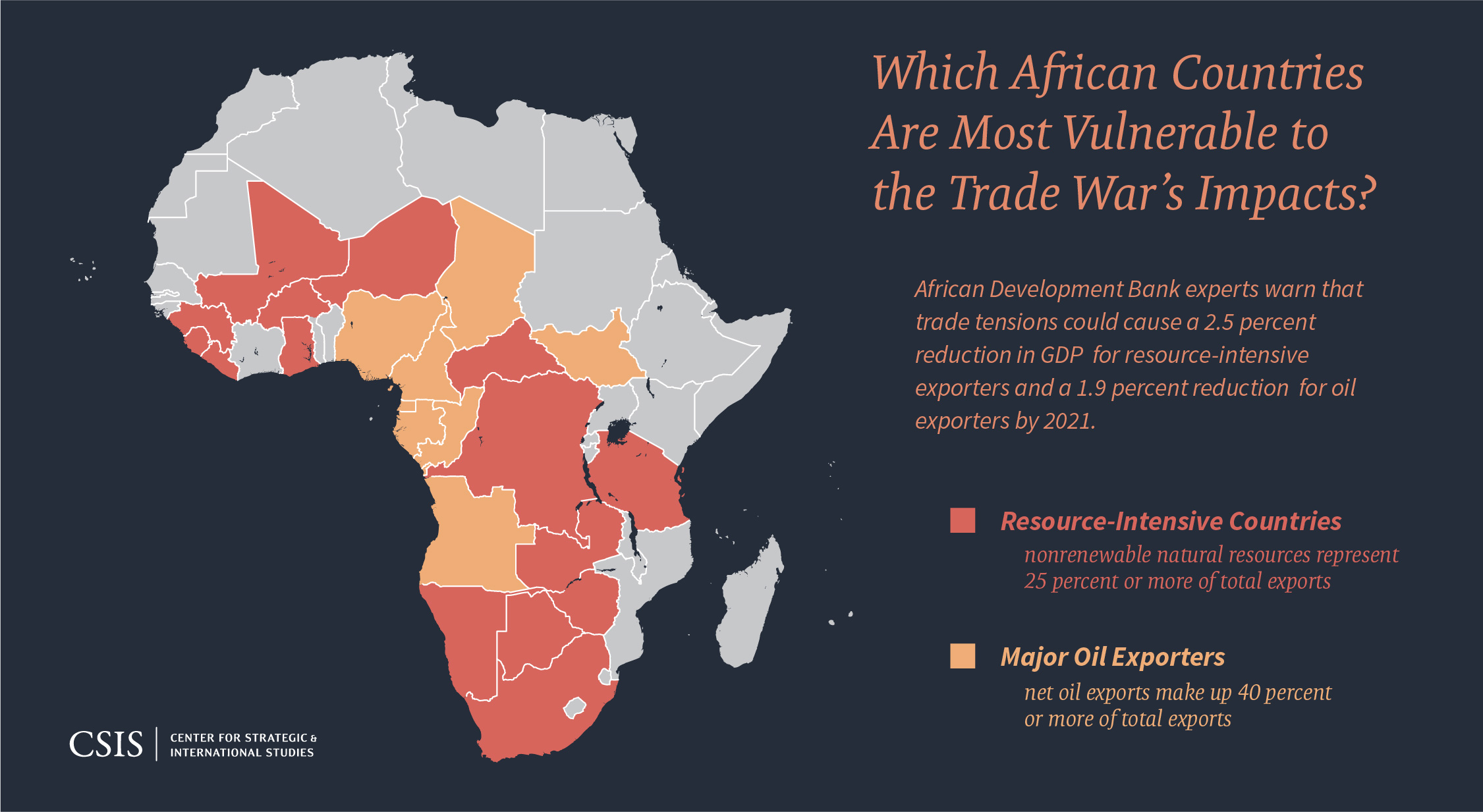 The trade war is predicted to depress global commodity prices and decrease Chinese demand for imports, potentially exacerbating sub-Saharan Africa’s economic vulnerabilities. Most African countries rely on the export of a few commodities for revenues and primarily engage with non-African trade partners, such as China and European countries.7 A combination of protectionist policies, weak manufacturing sectors, infrastructure gaps, and domestic instability have impeded the diversification of many African economies, as well as the establishment of local and regional supply chains, for decades. These weaknesses are especially prevalent within resource-intensive countries.8 As a result, oil-rich Nigeria and copper-exporter Zambia, as well as governments that overwhelmingly trade with China, are especially vulnerable, while countries such as Senegal, which relies on a mix of agricultural products, tourism, and services for revenues, are more immune from the trade war’s impacts.

As trade tensions escalated between Beijing and Washington this year, China took to the world stage to amass political support against U.S. tariffs. Sub-Saharan Africa was no exception. Not only is the trade war spurring China to deepen its long-term investments in Africa as it reduces its dependence on the United States, but it is also being used by Beijing to sow anti-U.S. sentiment among African leaders and publics.

Not only is the trade war spurring China to deepen its long-term investments in Africa as it reduces its dependence on the United States, but it is also being used by Beijing  to sow anti-U.S. sentiment among African leaders and publics.

Although sub-Saharan Africa is largely absent from the current discourse on the trade war, tariffs nevertheless pose risks indirectly by undercutting the United States’ position and some of its priorities on the continent. Trade tensions primarily weaken U.S. goals of supporting development in sub-Saharan Africa through expanded U.S.-Africa trade and investment, restoring its political prestige on the continent, and challenging China’s expanding influence.

It is not inevitable that the U.S.-China trade war will have harmful consequences for sub-Saharan Africa and U.S. objectives in the region. The extent to which negative economic forecasts will materialize is contingent on Chinese and U.S. policy decisions and the ability for global and domestic markets to counterbalance the trade war’s negative effects. There are several short and long-term steps available to Washington to strengthen its U.S.-Africa strategy and resolve the contradictions surfacing between its global and regional approaches.

The more the U.S. government develops Prosper Africa, the more effective the United States will be at countering rumors and negative reactions from African, Chinese, and other global stakeholders.

Judd Devermont is the director of the CSIS Africa Program. Catherine Chiang is a program coordinator and research assistant with the Africa Program at the Center for Strategic and International Studies in Washington, D.C.