On February 14, Minister of Economy, Trade, and Industry Hagiuda Koichi announced that the Japanese government would provide comprehensive guidelines to Japanese companies to help them identify and address potential human rights abuses in their global supply chains. These guidelines help fulfill a commitment made by the Japanese government in its 2020 National Action Plan (NAP) on Business and Human Rights and by G7 trade ministers in December 2021. The guidelines will outline the steps Japanese companies should take, consistent with the UN Guiding Principles on Business and Human Rights and the OECD Guidelines for Multinational Enterprises, to prevent, mitigate, and remedy potential harms companies may cause or contribute to. Although these guidelines will be voluntary, Minister Hagiuda indicated the government may consider adopting binding legislation as well.

With this move, Japan joins a growing group of governments that see financial, strategic, and even national security benefits to guiding their companies’ impacts on people around the world. Earlier this year, the European Union released a draft directive that would require large EU and some non-EU companies to assess their human rights impacts and take steps to address them; failure to do so would result in administrative penalties and civil liability. The United States recently closed a loophole in the law banning imports of goods made with forced labor, and U.S. Customs and Border Protection is now assertively enforcing that ban—including denying entry to a shipment of clothing from Japanese company Fast Retailing (the corporate owner of Uniqlo) because it was allegedly produced using cotton harvested with forced labor in Xinjiang, China. Other countries, such as Kenya, are discussing similar moves, but thus far efforts have been dominated by Europe and North America. For that reason, Japan’s initiative could be a game changer, and could have a significant influence on business practices across Africa, Central and Latin America, and the Indo-Pacific.

The potential loss of market access and threat of overseas legal liability are no doubt two factors driving Japanese government interest in this topic. Many major Japanese companies, including Honda, Toyota, and Fast Retailing, do significant business in the European Union and will likely be subject to the European Union’s due diligence directive, while Japan exported $135 billion worth of goods to the United States in 2021. But there are more fundamental interests and values playing into the decision as well.

The administration of Japanese prime minister Kishida Fumio has focused on human rights diplomacy, including promoting human rights as a foreign policy objective. In November 2021 former minister of defense Nakatani Gen was appointed as Japan’s first human rights czar to implement the prime minister’s human rights agenda, including addressing ongoing abuses in Xinjiang and Hong Kong. The rapid withdrawal of international companies from Russia as a result of the invasion of Ukraine has only made this issue more urgent; in April, Prime Minister Kishida introduced a ban on the import of machinery, vodka, and certain types of wood from Russia, and also froze several Russian assets in Japan.

As Japan prepares to hold the G7 presidency in 2023, it has an opportunity to put its human rights diplomacy on full display with respect to the global impacts of the private sector. In June 2021, G7 leaders committed to remove forced labor from their supply chains, and in December, trade ministers agreed on specific steps to implement this commitment, including issuing human rights guidance to companies, ensuring their own procurement processes are free of forced labor, and developing trade rules that reinforce labor rights. As part of its 2022 presidency, Germany hopes to push the G7 further, with a discussion on an “internationally accepted, binding standard for corporate due diligence,” consistent with Germany and the European Union’s previous moves in this direction. Further progress may be limited this year as the focus remains on the situation in Ukraine, but Japan will have the opportunity to pick up the mantle in 2023 by encouraging G7 members to continue to expand their efforts to prevent forced labor—and other egregious human rights abuses—in their supply chains.

The Track Record of Japanese Companies

Two surveys conducted in 2021 found that most Japanese companies do not have adequate policies in place to prevent human rights abuses in their supply chains. According to a June 2021 Nikkei Asia poll, only 12 percent of Japanese companies actively screen for human rights risks in their operations, despite nearly 80 percent of companies viewing human rights violations as a growing risk to their business. A separate survey by the Japan Bank for International Cooperation (JBIC) found that about 50 percent of Japanese companies have human rights policies or are discussing implementing them in the future, but only 11 percent were taking active measures at the time to address human rights. Companies cited a lack of adequate guidance on how to carry out effective due diligence as one barrier to implementation, a finding that helped drive the Japanese government decision to develop its own guidance.

As mentioned earlier, large Japanese companies like Fast Retailing, which owns the brand Uniqlo, are under scrutiny for particular actions. In 2021, U.S. Customs and Border Protection blocked a shipment of Uniqlo shirts from entering the United States when the company could not demonstrate that the cotton used in the products was not picked using forced labor in Xinjiang. French prosecutors opened an investigation into Fast Retailing and three other fashion retailers on the same grounds.

In 2017, the Japan Business Federation, or Keidanren, revised its Charter of Corporate Behavior to call on member companies to “conduct business that respects the human rights of all persons,” and developed its own set of guidelines for member companies. In a recent essay, Keidanren vice chair Futamiya Masaya laid out the case for both reducing human rights harms by business and using respect for human rights as an opportunity to build public trust, international competitiveness, and a strong pipeline of talent. These principles are reinforced in Japan’s 2020 NAP, which outlines the government expectation that Japanese companies adopt a human rights policy, implement human rights due diligence processes, and provide remedy for adverse human rights impacts from their business activity based on international standards. The NAP’s fundamental principles place equal responsibility on government agencies and business enterprises to preserve, promote, and protect human rights.

In early 2021, the Japanese government revised its corporate governance code and guidelines for investor and company engagement to incorporate diversity and prioritize attention on sustainability and environmental, social, and governance (ESG) performance. This includes an expectation that companies implement policies with measurable targets to appoint women, non-Japanese, and mid-career professionals to increase diversity. It also requires companies to develop policies and disclose initiatives on corporate sustainability, and enhance the quality and quantity of their climate-related disclosure based on the Task Force on Climate-Related Disclosure (TCFD) recommendations. These guidelines incorporate principles of the UN Sustainable Development Goals and International Labor Organization declarations. As a further signal of the growing importance of ESG factors to investors, including in Japan, S&P Dow Jones Indices and Japan Exchange Group announced on March 28 the launch of an ESG index series measuring Japanese company performance on these indicators.

Japan is also working to address human rights issues in its supply chains directly, most notably through a new program of support implemented by the UN Development Program (UNDP). The program will provide support to Japanese companies and their global suppliers to manage human rights risks across 17 different countries, as well as work with governments in those countries to better regulate company impacts directly. The program aims to benefit both companies—by creating a more level playing field—as well as workers and communities affected by business operations.

Finally, with the guidelines expected to be issued in summer 2022, the Japanese government has been convening business, labor, human rights, and academic stakeholders to input into the process, including the Japanese Trade Union Confederation, Keidanren, and the Civil Society Platform for Japan’s NAP. 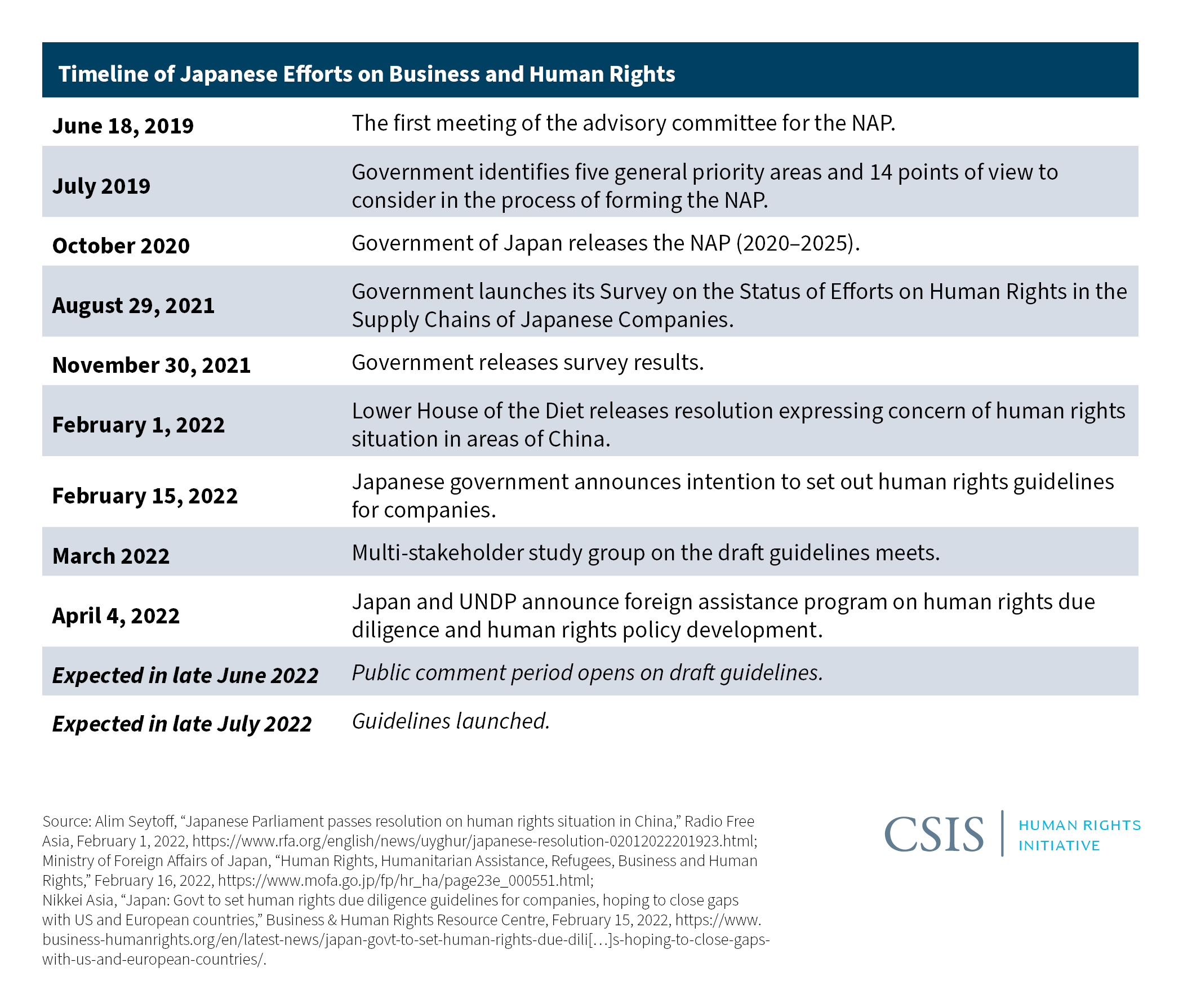 As countries increasingly recognize the diplomatic, economic, and security benefits of promoting sustainable and responsible business practices, Japan has an opportunity to show global leadership, beginning with robust due diligence expectations for Japanese companies. Beyond these voluntary guidelines, there are at least four additional steps the Japanese government should consider.

First, the government should conduct robust follow-up monitoring and assessment of Japanese companies’ implementation of the forthcoming due diligence guidelines. If, as Germany experienced, voluntary guidelines do not result in significant progress in corporate due diligence and a reduction in human rights harms by Japanese business, the government should consider adopting binding requirements for Japanese companies, with legal consequences for failure by companies to work to prevent human rights abuses in their business operations and their supply chains.

Second, the government should consider a ban on the import of goods produced with forced labor. A 2018 study suggested that Japan imports $47 billion worth of goods annually at high risk of being produced with forced labor, including electronics, apparel, seafood, and cocoa. Adopting a ban similar to Section 307 of the U.S. Tariff Act, as Canada has done and the European Union is considering, would further narrow the markets available to these goods, reducing the incentive of companies to simply reroute high-risk goods to different destinations rather than tackle the problem directly.

Finally, through its 2023 G7 presidency, Japan can encourage other G7 member states to adopt these practices. The market power of G7 countries working together to ban forced labor imports and shape company decisionmaking through their purchasing power could be game-changing for human rights in business. Japan has an opportunity to carry out its “human rights diplomacy” agency in a powerful way by setting an example and encouraging its peers to join its efforts.