Brief by Gregory B. Poling 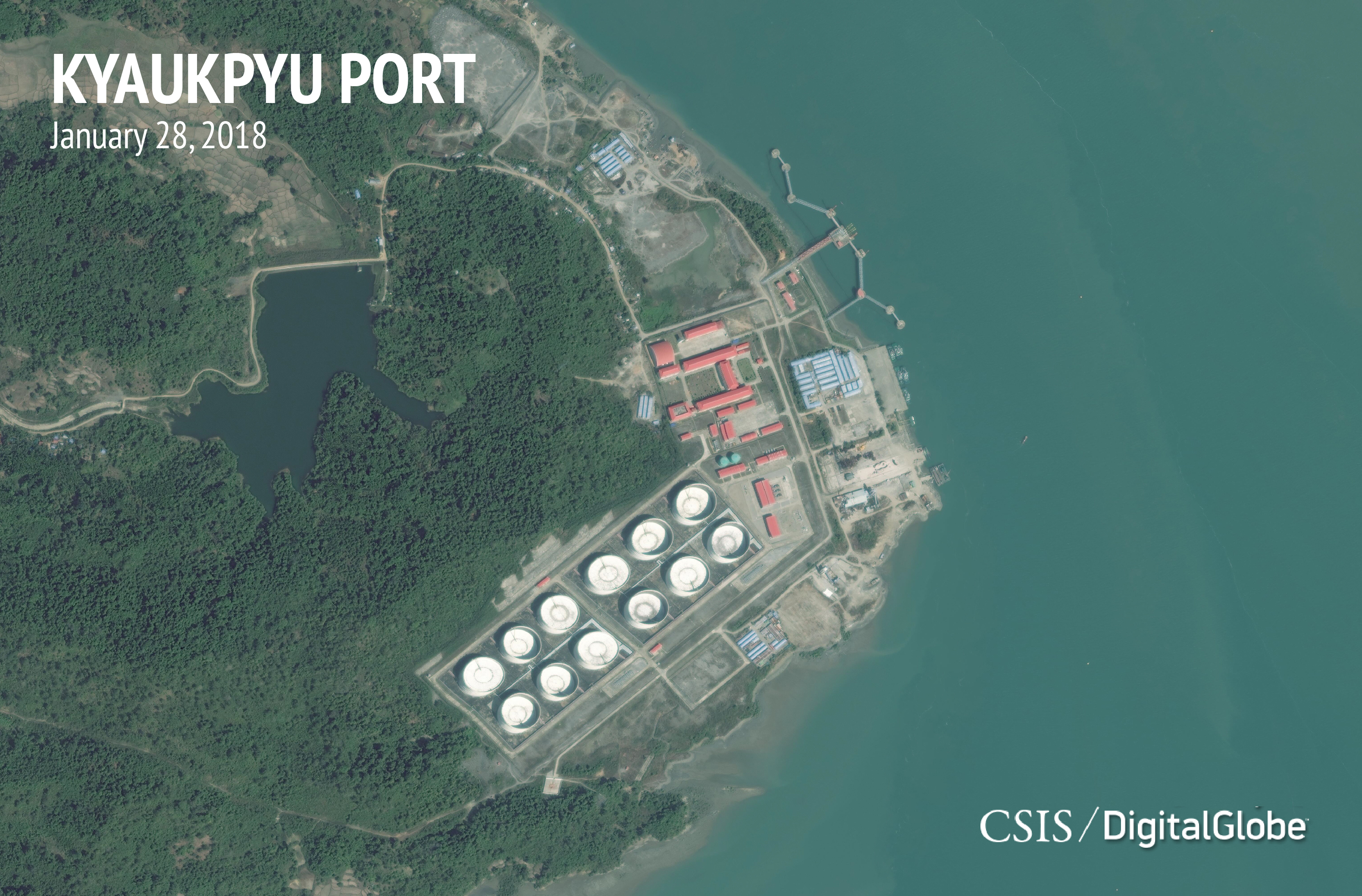 Kyaukpyu is a coastal town along the Bay of Bengal in Myanmar’s western-most state of Rakhine. In 2016, subsidiaries of China’s CITIC Group Corporation, including China Harbor Engineering Company, won contracts for two major projects in the town—the dredging of a deep-sea port and the creation of an industrial area in an accompanying special economic zone (SEZ). The port project is valued at $7.3 billion and the SEZ at $2.7 billion. Under the terms of the deal, CITIC will build and then run the project for 50 years with a potential extension of another 25 years.

Negotiations on Kyaukpyu predate the Belt and Road Initiative—CITIC signed initial memorandums of understanding (MOUs) for the harbor project and a railway connecting the SEZ to southern China in 2009. However, they languished amid political sensitivities in Myanmar surrounding Chinese investments following the 2011 suspension of the Myitsone dam project and violent protests starting in 2012 over the Letpadaung copper mine. The railway MOU was canceled in 2014 while the port and SEZ industrial area projects are moving forward, but slowly and with considerable pushback within Myanmar. Only in October 2017 did the two sides reach an agreement on ownership of the port project after CITIC agreed to drop its stake from 85 percent to 70 percent. Ownership stakes in the SEZ have yet to be finalized.

The Strategic and Economic Rationale

China has remained committed to the Kyaukpyu projects primarily because the town is the terminus of a $1.5 billion oil pipeline and a parallel natural gas pipeline running to Kunming, capital of southwestern China’s Yunnan Province. Unlike the other projects related to Kyaukpyu, construction on the pipelines moved forward despite significant local opposition. They were constructed between 2010 and early 2015 by China National Petroleum Corporation and Myanmar Oil and Gas Enterprise—both state-owned firms—with the former the majority stakeholder. The gas pipeline entered operation in 2013 and can send 12 billion cubic meters of gas to China annually. After a two-year delay, the oil pipeline finally entered operations in April 2017. It can reportedly carry 22 million barrels of oil per year, which amounts to about 6 percent of China’s 2016 oil imports. The pipeline project is part of a strategic effort by Beijing to reduce its reliance on oil and gas imports through the Strait of Malacca, thereby avoiding the possibility that an adversary like the United States could close the strait to threaten China’s energy supply.

Kyaukpyu is of considerable strategic and economic value for China as it seeks to speed development of Yunnan and its other inland provinces.

Building a deep-sea port at Kyaukpyu makes considerable economic and strategic sense for China in its drive to develop its inland provinces. Shipping goods from Europe, the Middle East, Africa, and India to Kyaukpyu and then overland to Yunnan could save thousands of miles. It would be far more efficient than sailing all the way through the Strait of Malacca and the South China Sea to ports along China’s southern and eastern coasts, and then traveling overland to China’s western provinces. Unsurprisingly, in December 2017 State Councilor Aung San Suu Kyi and President Xi Jinping agreed during a meeting in Beijing to establish a new China-Myanmar Economic Corridor connecting Kyaukpyu and Kunming. No details were released, but the project would likely include construction of a road and perhaps the restart of the suspended rail project. Mandalay, Myanmar’s second-largest city and the traditional hub for trade with southern China, would serve as a waypoint along this new economic corridor. Ultimately it seems Chinese planners envision the Kyaukpyu to Kunming oil and gas pipelines as just the first step in a new trade route that could change the economics of China’s hinterland.

This podcast episode focuses on the current state of China-Myanmar relations.

While the establishment of a deep-sea port at Kyaukpyu makes sense for China, its benefits for Myanmar will depend in large part on the success of the accompanying SEZ. Without successful industrial projects in the SEZ, Kyaukpyu could become little more than a waystation for goods headed to Yunnan. The former government of Myanmar under Thein Sein promoted three large SEZ projects to boost the country’s economy. Of these, the Japanese-led Thilawa SEZ just outside Yangon is the only one already up and running. Another, the joint Thai-Japanese Dawei project along the southern coast, has faced constant financial troubles but continues to move forward slowly. That puts Kyaukpyu third in a three-way race, and it is unclear whether the zone, with its late start and distance from Myanmar’s commercial and economic heart of Yangon, will be able to lure sufficient investment.

Dangers Both Real and Imagined

There are concerns among some in India and the West, as well as within Myanmar itself, that China could leverage the port at Kyaukpyu for military purposes, but such worries are premature at best. Myanmar’s leaders, both military and civilian, are famously jealous of the nation’s sovereignty and will not accept a permanent foreign military presence, whether from China or anywhere else. In fact, the country’s 2008 constitution expressly forbids the deployment of foreign troops on its soil. That means that commercial investment in the port at Kyaukpyu is not likely to lead to a permanent Chinese presence such as in Djibouti or, reportedly, Gwadar, Pakistan. Chinese naval assets could certainly pay calls to the port from time to time, as they do at Colombo in Sri Lanka, which is also majority-owned by a Chinese company. But such port calls should not by themselves be cause for concern.

Concerns about Chinese economic leverage are not new to Myanmar, and help explain the continued local opposition to Kyaukpyu.

A more realistic, and worrying, possibility is that China could gain a dangerous level of economic leverage over Myanmar due to the accumulation of too much Chinese-funded debt. Chinese loans and large-scale investments have proven highly controversial in other regional states, such as the Maldives, where Beijing has been accused of using them to leverage the recipient nation into making political and economic concessions against its national interest. Such fears are not unfounded. The Myanmar government’s 30 percent stake in the Kyaukpyu port amounts to $2.2 billion. If it takes a 50 percent stake in the SEZ, that would bring its total responsibility for the projects to $3.5 billion, or about 5 percent of GDP. As Yun Sun at the Stimson Center has pointed out, if the Myanmar government cannot handle that level of financing, it will likely turn to Chinese loans.

Concerns about Chinese economic leverage are not new to Myanmar, and help explain the continued local opposition to Kyaukpyu (and hence the glacial pace of its implementation). One of the driving factors behind Myanmar’s decision to move toward civilian government in 2010–2011 was a worry about overreliance on China amid continued Japanese and Western sanctions. For the time being, China remains a major but not overwhelming economic presence in the country. China has a major footprint in Myanmar, both in trade and investment, but so do other partners like Japan that provide Myanmar with a significant degree of maneuverability. That is not likely to change in the short term, though the potential debt burden from Kyaukpyu bears watching.

Kyaukpyu is of considerable strategic and economic value for China as it seeks to speed development of Yunnan and its other inland provinces. That value is centered on the development of a deep-water port and the construction of accompanying road and rail links to supplement the pipelines already running to Kunming. Whether the project also boosts Myanmar’s economic growth will depend on the success of the accompanying SEZ, and the terms under which it takes shape.

Gregory P. Poling is director of the Asia Maritime Transparency Initiative and a fellow in the Southeast Asia Program at CSIS.